“To be perfectly honest, self-building hadn’t crossed our minds in almost 30 years of living here,” starts Mel Lewis. Which is all the more surprising considering that what he and wife Pauline have ended up building, on the site of their former family home in a pretty part of Kent, is something that looks like it has been years in the dreaming.

Mel and Pauline moved to this private road as a young couple, attracted to the secluded nature of the location, the easy commute into London and the large leafy plot. “The dormer bungalow itself was functional enough, and served us well over the years, but we knew that, due to its size with only two bedrooms upstairs, it really didn’t make enough of the fabulous site and we wanted to do something about it,” explains Pauline. 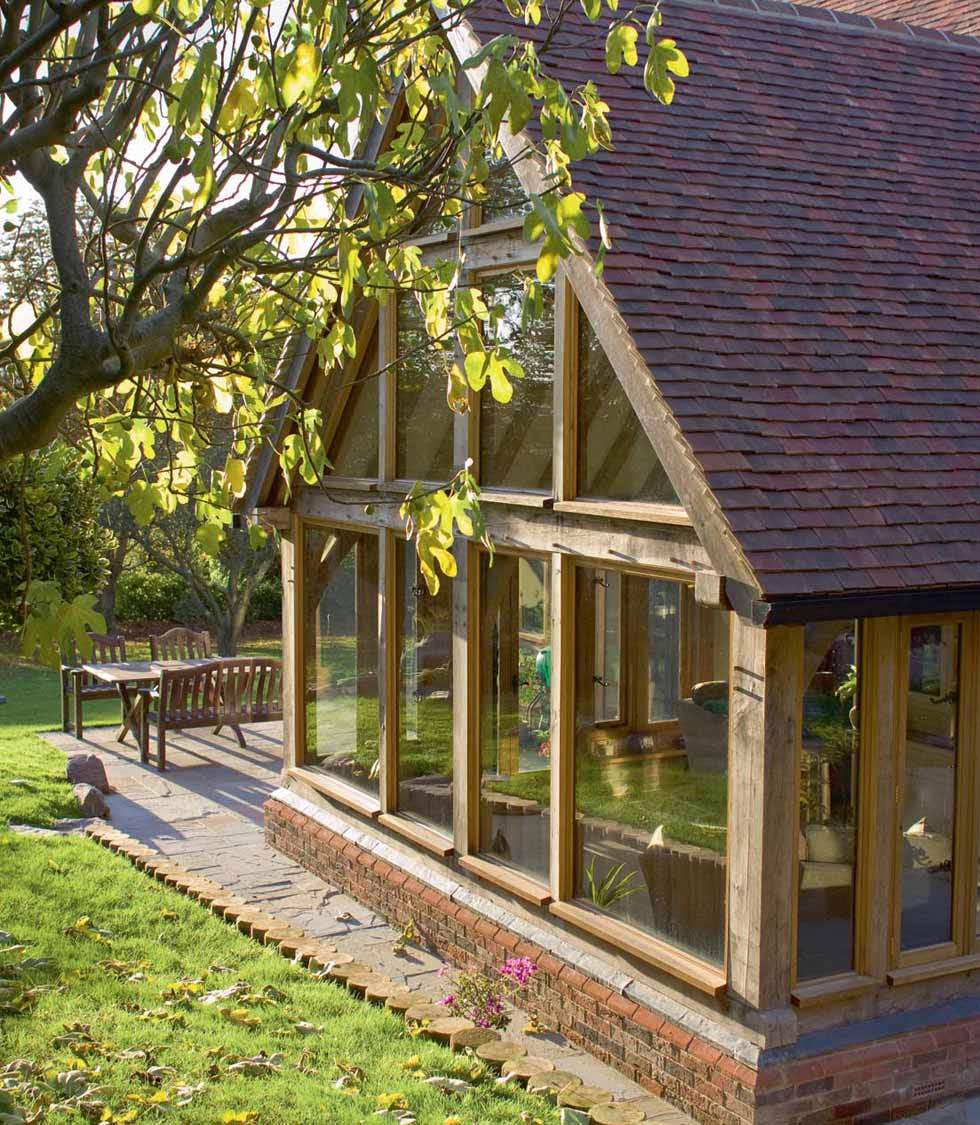 The oak frame sunroom replicates the feeling of a conservatory without the overheating.

So the couple set about making plans for a substantial renovation of the dormer bungalow, looking at extending, internal remodelling, and making more of the roof space. As plan after plan really failed to give them the space they wanted, an architect suggested raising the roofline to give them a full second storey. “It certainly would have provided the space that we needed, but something was still wrong – the design of the outside just didn’t look good,” says Pauline. It was then that a wise structural engineer friend gave the plans a fresh look. “He explained how, with the amount of renovation work we would be undertaking, we weren’t really leaving much of the house in place,” she continues. “He argued that stretching the existing house was always going to be difficult from a building point of view, and that building from scratch would allow us to get the house we’d always dreamed of.”

At about this time, and still unsure of such a significant project, Mel took a life-changing drive home from work. “I went past a new oak frame house being built, and it just brought everything together for me. It looked fabulous and so full of character for a new home. I drove home, picked up Pauline and we went back to have another look. We both fell in love with it, and made a note of the Oakwrights sign outside. Within days we’d gone from a loft conversion to a new build. But we’d seen our dream home, and everything else seemed like a compromise thereafter.” 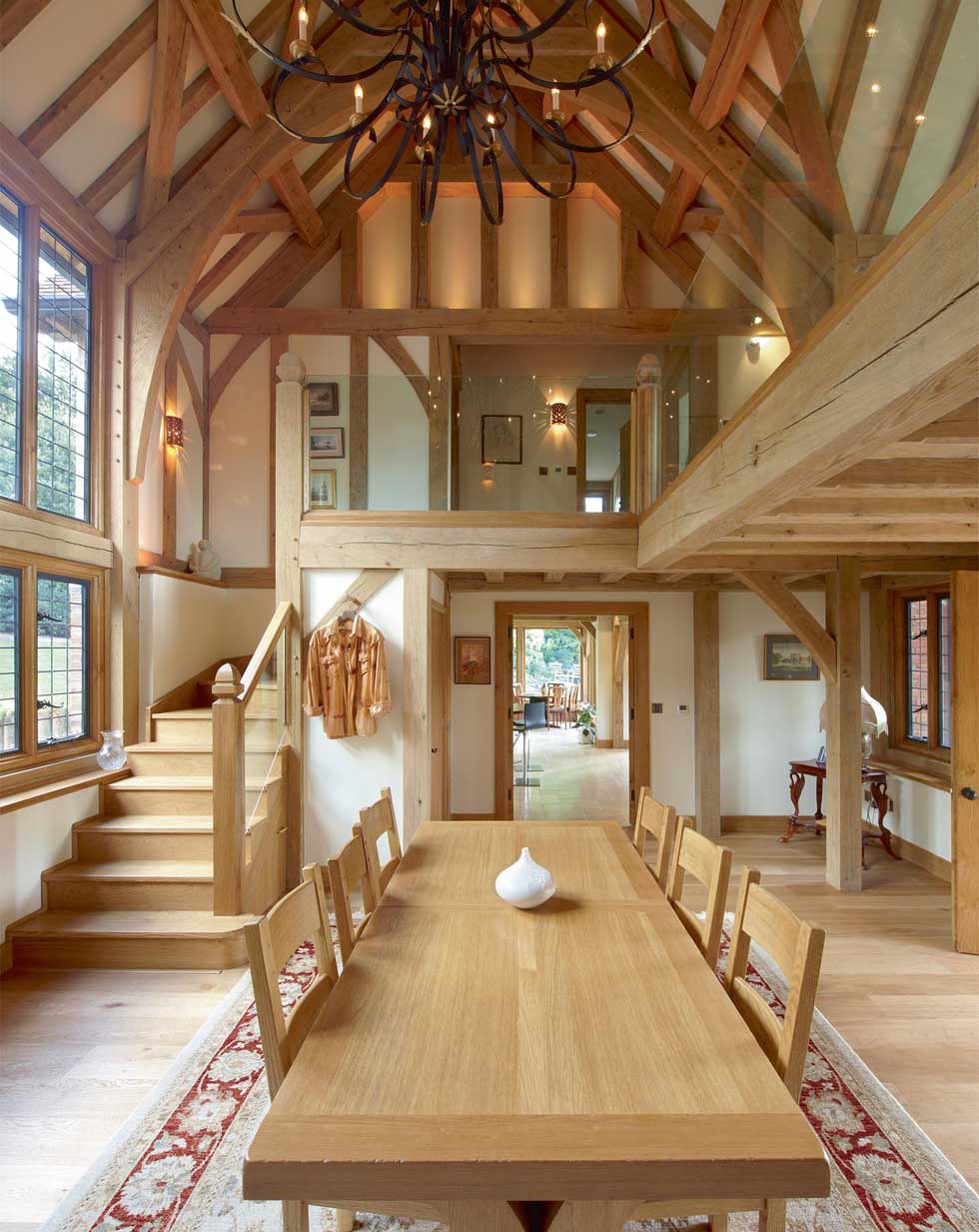 Mel and Pauline decided to change the original scheme for the central atrium, which had a central split staircase starting where the table now sits.

With the design of the finished house the overriding priority, Mel and Pauline involved themselves heavily in the process with an Oakwrights’ architect (Oakwrights uses freelance designers to ensure each of its houses has a bespoke appearance and is tailored to the unique needs of the homeowner). “One of the things we really did well was to take a keen interest in the design process,” says Mel. “So many people rush into the construction element of the project and end up disappointed because they didn’t pay enough attention at an early stage. We knew that the end result for us was everything, and so we studied the plans for hours to see how they would best suit our lifestyle. For instance, on one of the early drafts, the central dining hall atrium space, which was one of the things we loved most about Oakwrights homes, was compromised by a large central staircase, which seemed to block out a lot of the light. We went back and forth with the plans several times, and every time it got a bit closer to what we wanted. Luckily Oakwrights provided us with a 3D virtual walkthrough of the scheme, which was a great tool – it really helped us visualise how the house would work.” 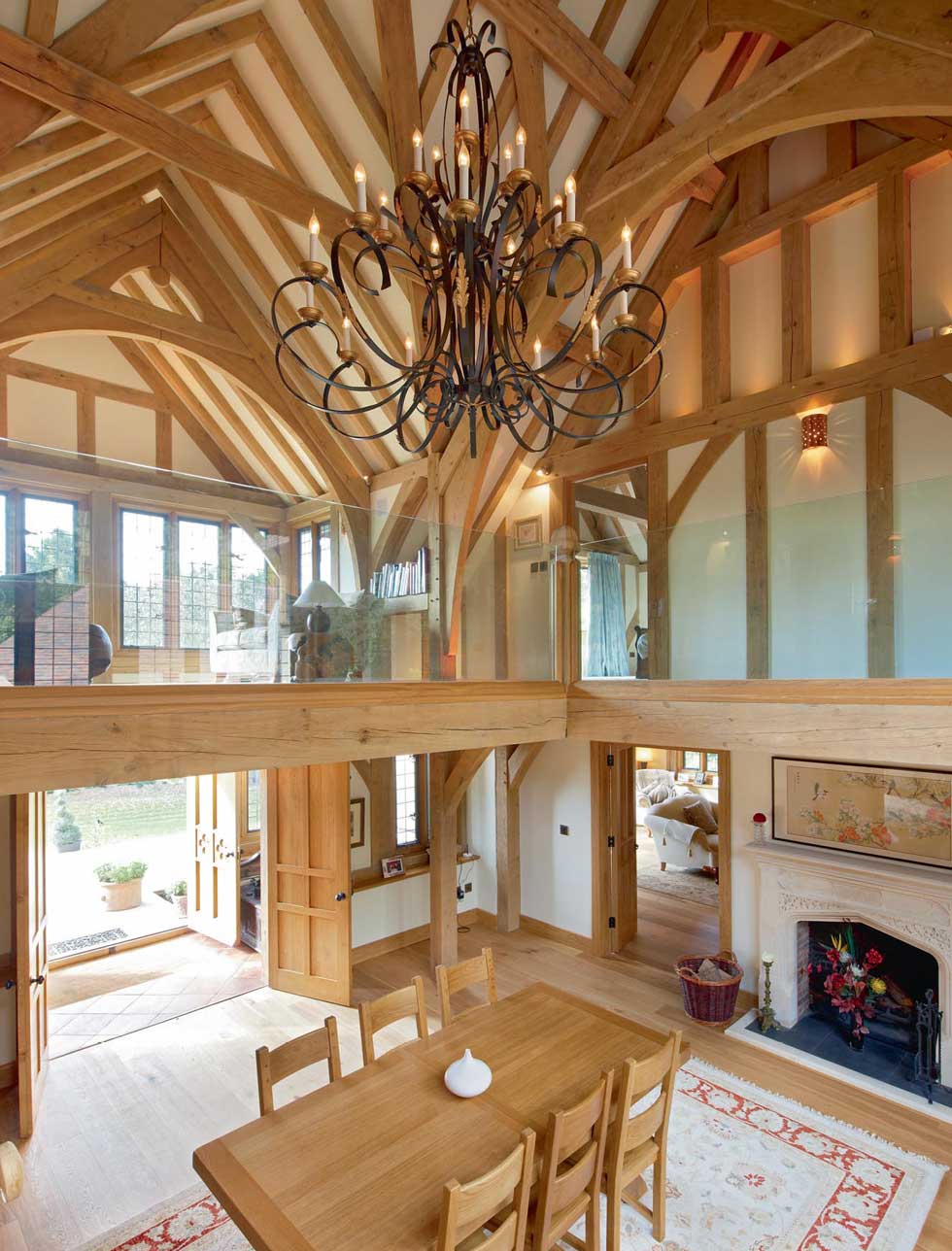 The central atrium space is the heart of the house and is used as a dining hall.

Planning having sailed through – it’s a secluded location, with a mix of local house styles – Mel and Pauline then made another wise decision – to bring on board a main contractor to oversee the project on their behalf. “We realised early on that we needed some expert help, and whilst Pauline was able to spend time doing valuable research in order to ensure we achieved the right design features and finishes, we felt the best route for the build would be to put the project in the hands of a professional,” explains Mel. “We chose a local firm, Sennocke Construction, that we’d been recommended, and although they actually specialised in speculative housing we knew they would be able to run an efficient project and had lots of local contacts. We also took on board Trevor, our structural engineer friend, who had a wealth of experience and was able to offer advice on any major technical issues.”

So with Mel and Pauline bidding farewell to their family home of 30 years and decamped to a house nearby, work could begin in earnest on demolition. “The main contractor made short work of pulling down the house and replacing it with new footings and a floor slab,” says Pauline, who visited the site every day to deal with any issues that might arise. “It was strange at first to see the old house go, but we were so excited at this stage to see real progress and be a step closer to our dream home.” The main contractor got the project to oversite stage and then handed things over to Oakwrights, who delivered and erected the traditional oak frame post and beam structure. “It took several weeks for the team to get the whole thing up, but we soon began to get a very real sense of the craftsmanship and effort that goes into a house of this style,” says Mel. “Our main contractor then recommenced control of the site, bringing in his own subcontractors along the way.” 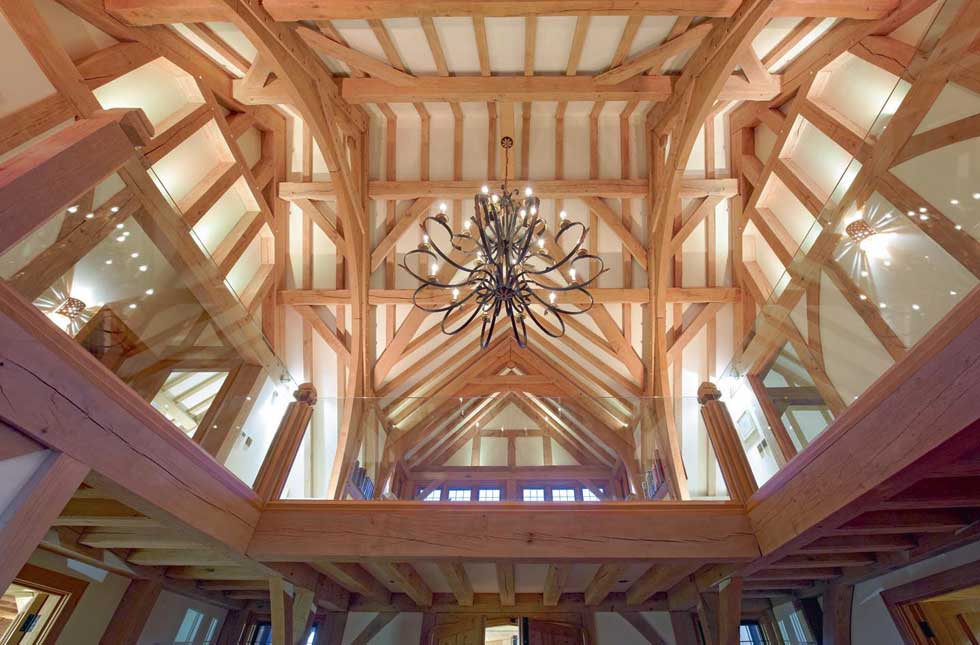 Mel and Pauline opted for a minimal toughened glass balustrading with no handrail for the large landing area.

It wasn’t all plain sailing, though. “One of the main difficulties with the project was that by having both main contractor and package company on board, it was occasionally difficult to get someone to take full responsibility,” explains Mel. “There were quite a few grey areas, and because we relied on the experts, we sometimes felt a little bit in the middle. These weren’t significant problems, but minor issues that crop up on any project. It also perhaps didn’t help that we paid very close attention when assessing the details, because to us they were extremely important. It was perhaps just a little different to what a contractor who specialises in houses for other people, and not a specific client, is used to.” It’s not too difficult to imagine – the difference between a standard even upscale developer house and a crafted oak frame home like this is huge.

“We agonised over a lot of the design details,” explains Mel. “The key area of the whole house for us is the central double-height dining hall atrium space. We knew that it would be centrepoint of the house and we wanted it to be light and open. The design really emphasises the huge cathedral-style windows that would face you as you walked into the space, but the problem we saw was that a ‘traditional’ balustrading, with ornate spindles and a heavy handrail, would take away from the openness that we wanted to achieve. We eventually decided to opt for handrail-free large sheets of toughened glass, which are obviously perfect for contemporary homes but, we feel, do the job brilliantly in this one too.” 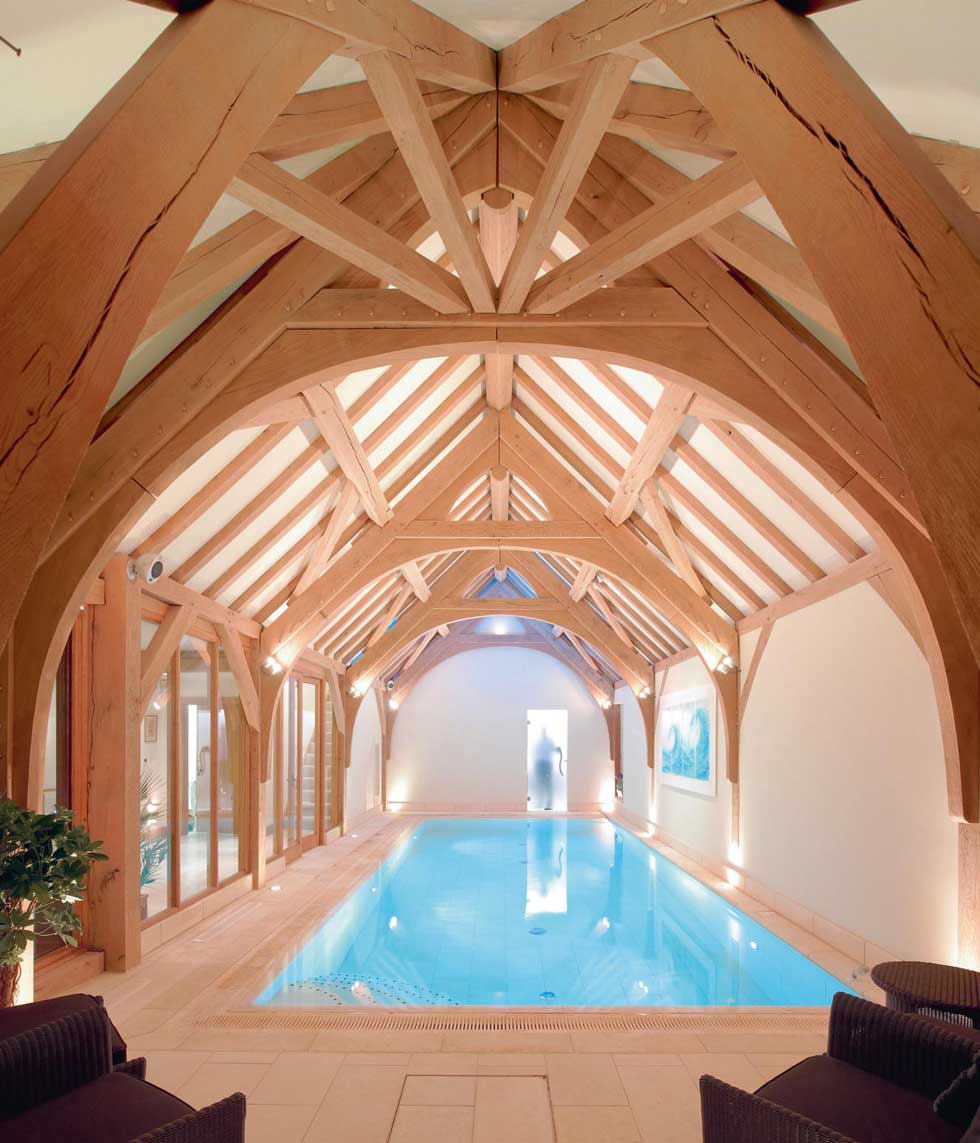 The indoor pool is heated by one of two ground-source heat pumps that service the home.

The agonising certainly paid off. Refreshingly, this is a beautifully designed house with a real sense of craft but it’s also very much a home built around the kind of lifestyle that Pauline and Mel have always wanted. “It suits our style and it has added so much to our life,” says Pauline. Not least of all thanks to the luxurious indoor pool (heated by one of two ground-source heat pumps that serve the property) and Mel’s basement (a precast concrete basement seemed good common sense as the original house had its own basement space) hideaway, which houses a large games, football-watching and wine-drinking retreat.

“One of the other big concerns for us was the size of the house,” continues Pauline. “We knew that at 650m2 it was going feel significantly bigger than our previous house (it is in fact 50% bigger), but we wanted to make sure that it still felt manageable and like a home, rather than a show home. In this respect it’s one of the main reasons we loved the Oakwrights style – the post and beam structure enables you to have a relatively open plan flow between spaces but also some structure to it all. We’ve managed to get the best of both worlds, I think, and have combined this with up-to-date technology by adding a multimedia system throughout. It is obviously a large house with plenty of accommodation – there’s a guest wing and large living areas and bedrooms – but it certainly feels like a living house that’s designed with people, not show, in mind.” 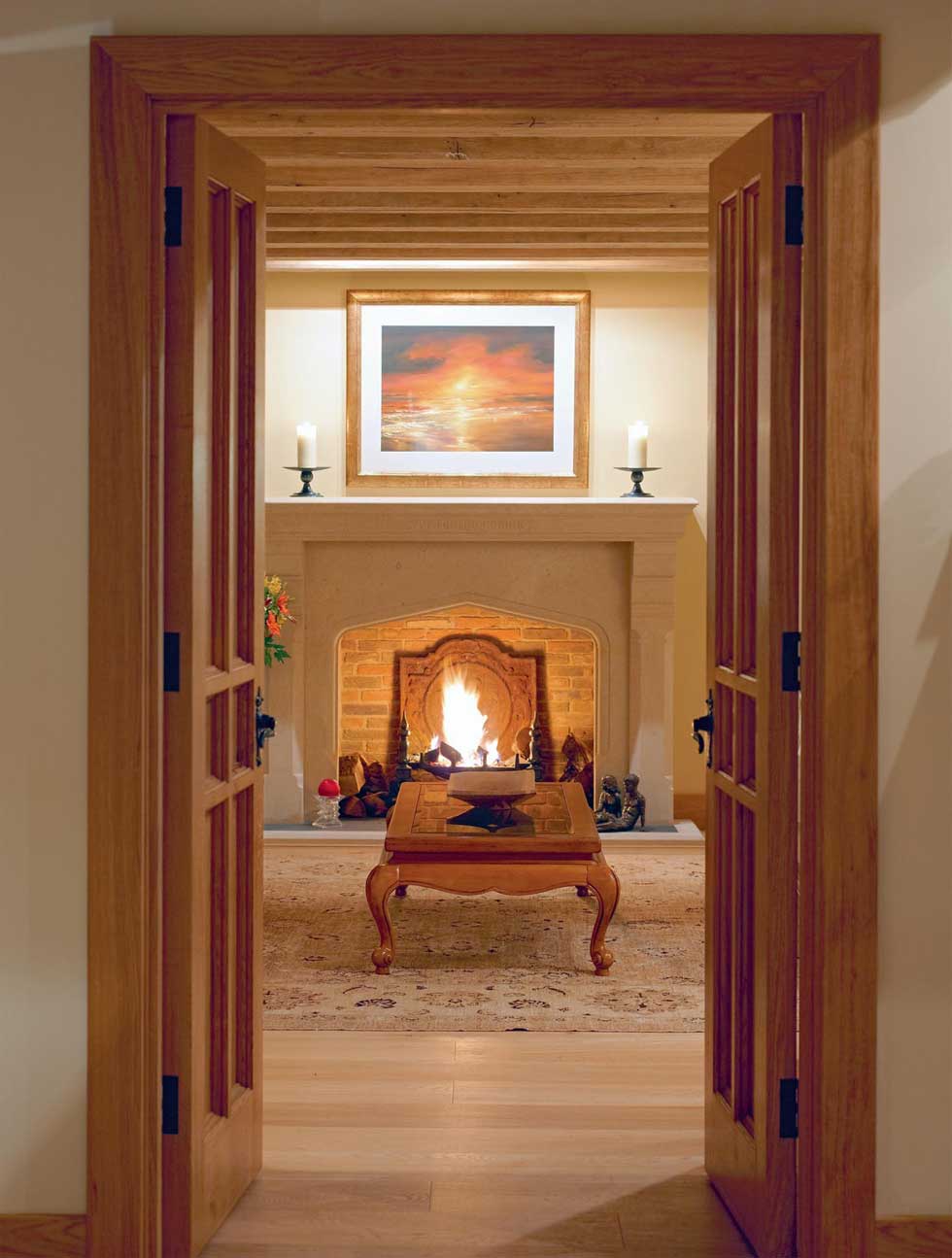 Althought most of the flooring in the house is limestone, the couple chose oak flooring for the living room to create a cosier feel.

Mel and Pauline are the first to admit that they were in a relatively lucky position from a financial point of view. “We obviously saved a lot of money by not having to buy a plot, which in this area would have made the project well beyond our means. We knew that we didn’t want to compromise and that, within reason, we could have the design and features that we wanted.”

And this is certainly a home without compromise. It meshes the inherent charm and character of a beautiful oak frame with a modern approach – this is a light, open and, most importantly, informal, welcoming home. There’s very little fuss but plenty of depth, and this is, after all, a dream home – one that matches a modern lifestyle with a perfectly executed design. 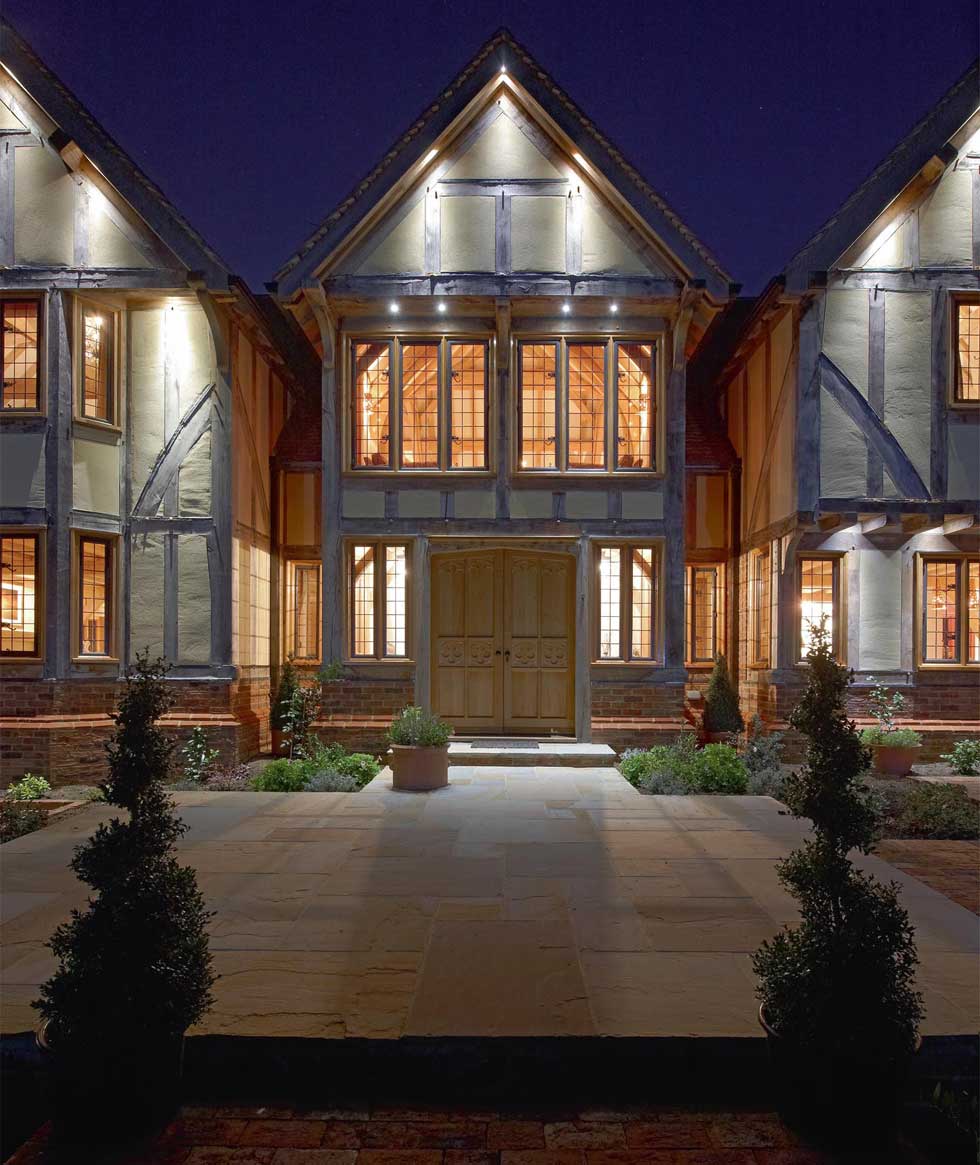 The entrance to the house lit up at night.

Oak, like any natural building material, does move – shrink and expand – with the seasons, particularly in the early years after construction. As with a house of any construction system, this process can be the cause of some redecorating and remedial work – many oak frame package providers schedule in a return visit a year or so after completion. Of particular concern to many would-be oak frame self-builders is the movement around glass. However, most oak frame suppliers use a combination of special silicone, primer and EPDM tape for sealing, and specify toughened glass – which can deflect – rather than laminated, which will crack. The same principle applies to other junctions that meet oak too; in these instances, silicone or cover beads bedded in mastic tend to be specified.