Merry and Ben Albright have built a beautiful oak frame cottage that is perfect for a young family – on a remarkably low budget.

When Ben and Merry decided to build their own home, they had firm views about exactly what they wanted. “We had already built a small cottage in a village near to our family,” Merry explains.

“It was our first home together, and we took immense pride and care in all the decisions and details; but when I became pregnant with our daughter, we knew that we needed more space. Ben and I had only lived in the house for 20 months, and here we were contemplating a second self build before we had even hit 30!”

The couple had lived in the same area all their lives and were determined not to leave the pretty village if at all possible, so when another plot became available just a short distance from their home, right in the heart of the village, they knew that they couldn’t let such a rare opportunity pass.

An ugly air-raid shelter sat virtually in the middle of the compact plot, which was formerly used as a breaker’s yard, and planning permission had been granted for a large two storey property with the proviso that the air-raid shelter remained. 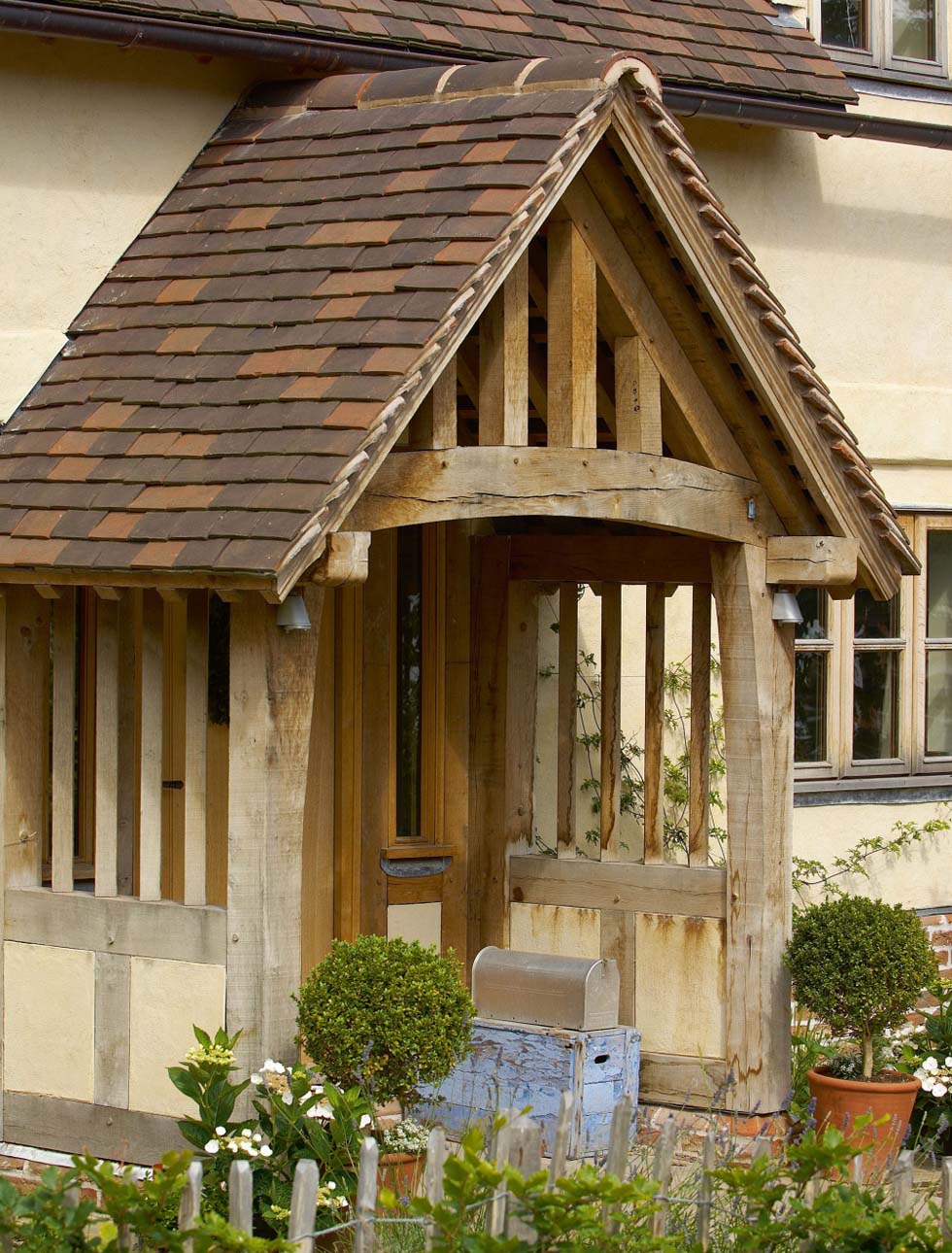 “We simply couldn’t afford to build the approved house design, but the planners were more than happy with our smaller, lower cottage, and Merry had great plans to convert the air-raid shelter into a potting shed or a garden office,” says Ben.

“In the end, though, the position of the shelter meant that we couldn’t comply with the council’s demands to provide three parking spaces and a turning space. Our planning officer suggested demolishing the redundant shelter, which meant that we were able to relocate the house and have enough room to comply with the planning conditions.” 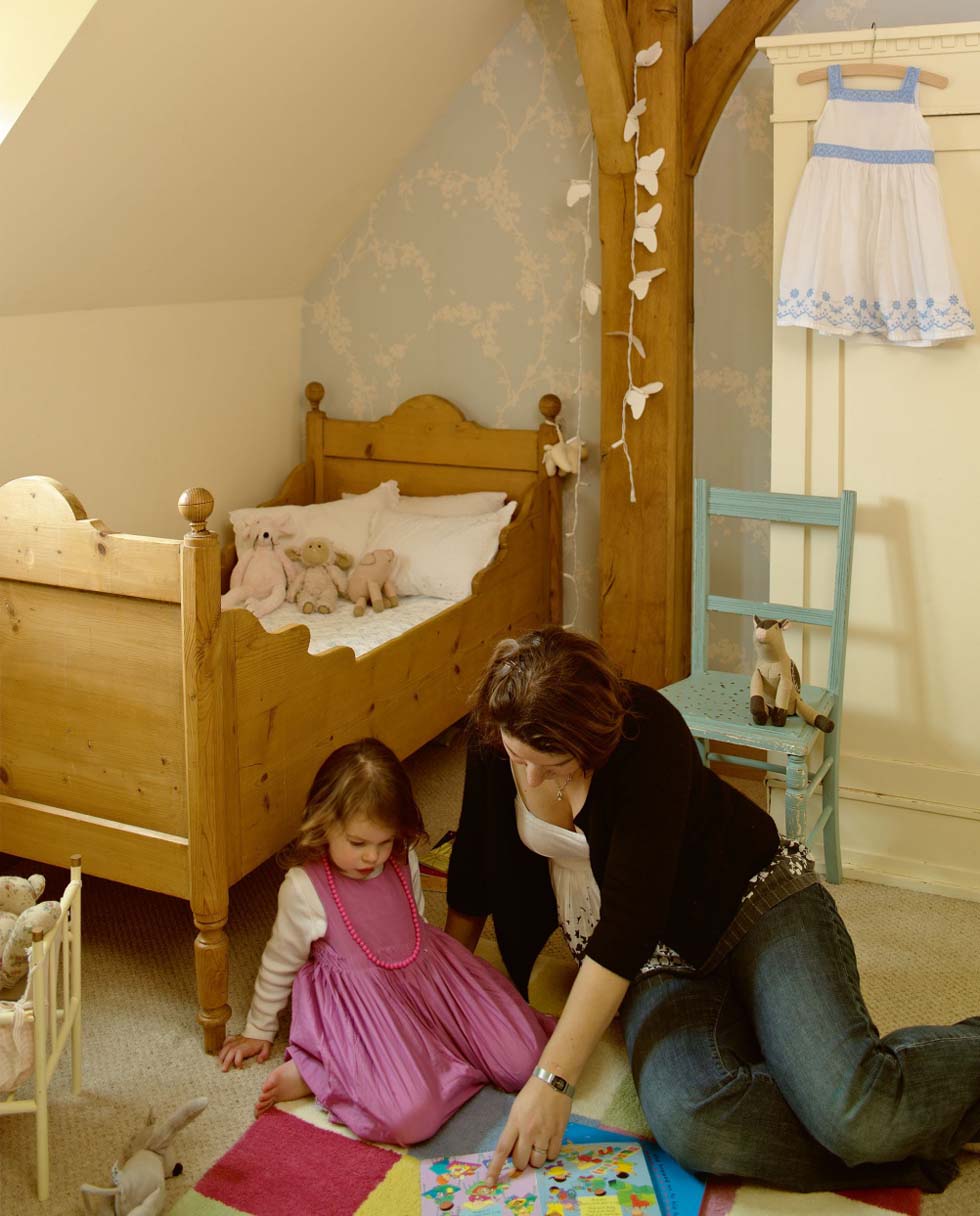 The site had cost £125,000, and the Albrights allocated a further “160,000 for the build – a figure which combined their full mortgage entitlement with the proceeds from the sale of their cottage. They realised that it was going to be a struggle to build a four bedroom house on such a tight budget, particularly as Merry would have to stop working when the baby arrived, and there was certainly no contingency fund for any unexpected expenses. 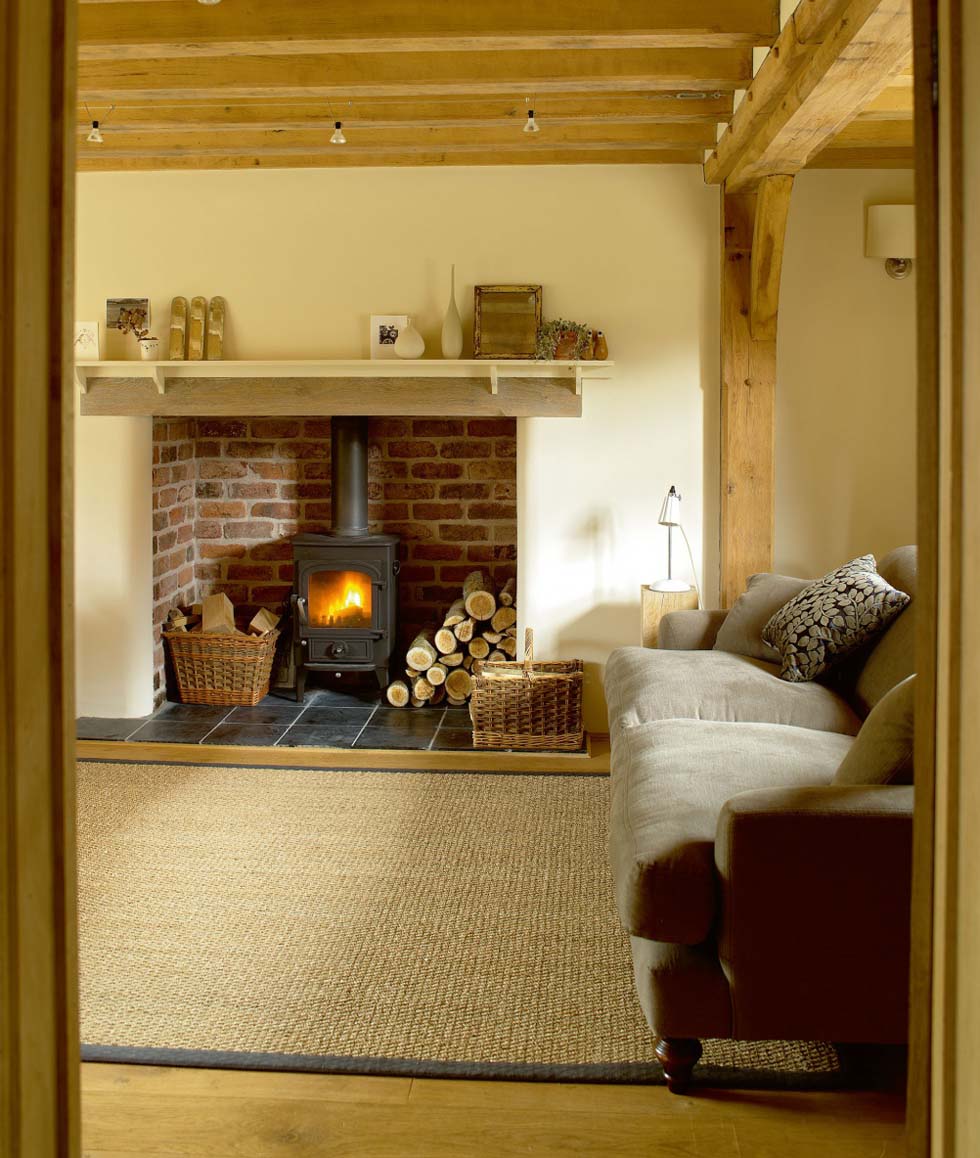 “We based the design largely on the cottage we had just sold, as it suited us and we hoped it would suit the village. We also knew that building something similar would be helpful when it came to estimating the costs, and wanted the house to look modest and simple – almost Arts & Crafts inspired – with a mixture of lime render and weatherboarding externally,” explains Merry, whose father owns the local oak frame building company, Border Oak, where Ben and many of Merry’s cousins work. “We made the kitchen bigger, which meant that we could have a vaulted master bedroom above, and the L-shaped building enabled us to create a modest elevation when viewed from the street.” 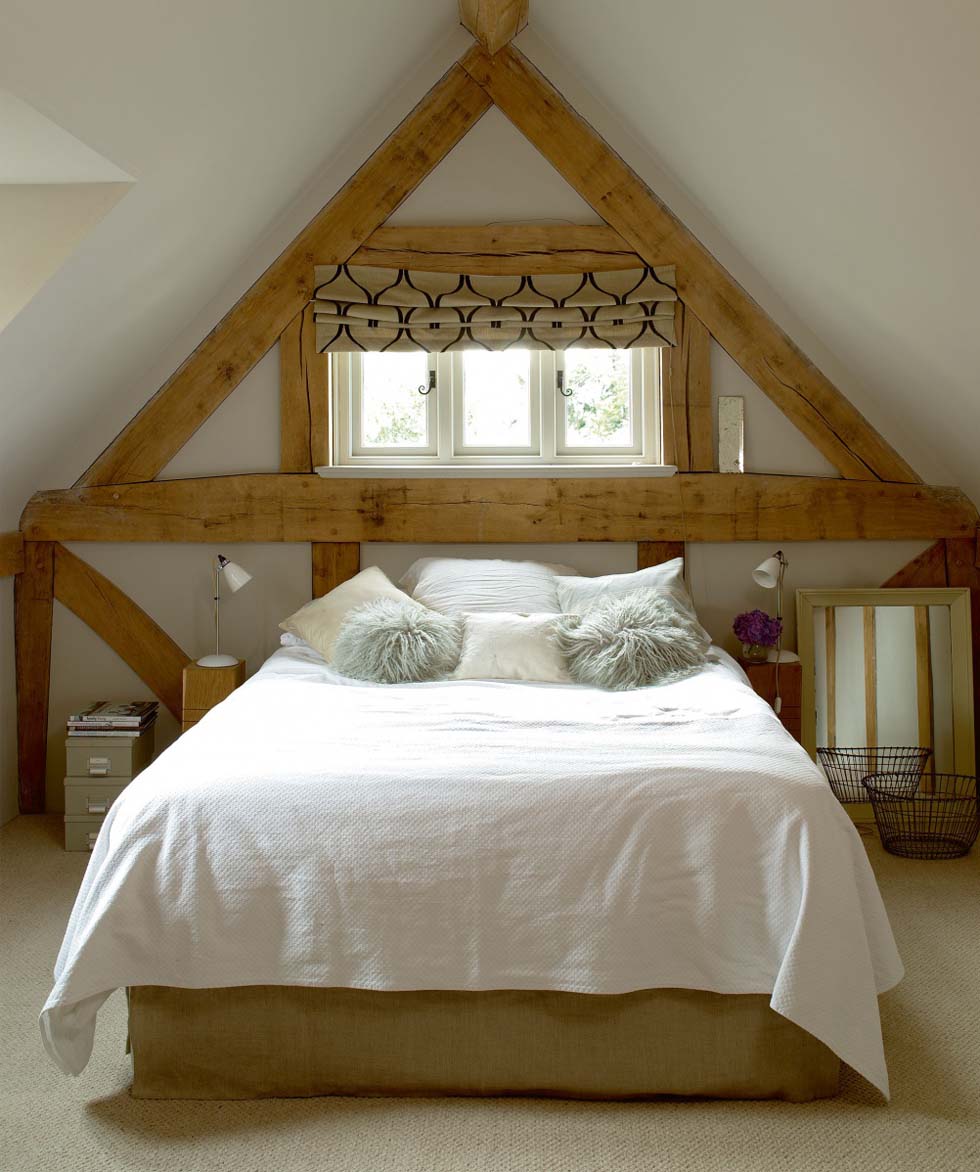 Planning for this one-and-a-half storey cottage was approved relatively easily, but when the builders arrived on site, a major setback occurred. A massive hole, filled with building rubble and timber, was discovered right where the foundations were due to be dug, and this required more concrete to reinforce the slab – a fact which upset Ben and Merry, who were determined to use as little concrete as possible for environmental reasons. Additionally, the contents of the pit had to be analysed before it could be removed – a process which resulted in a six-week delay and an additional cost of several thousand pounds.

Ultimately the foundations were poured, the slab levelled and Merry finished work two weeks before the couple’s baby was due to be born. The simple oak frame arrived and is arranged as two interconnected towers with arched braces, and the family room wing with the master bedroom upstairs has ornate exposed oak framing with a vaulted ceiling.

The main oak frame was erected and encased with SIPs (structural insulated panels) in just three weeks, during which time the weather conditions were appalling. “It was at this stage of the build that our baby was born,” says Ben. “The next few weeks were a complete nightmare, and building the cottage was totally forgotten because Minnie was quite unwell following the birth due to a head injury, and our time was occupied with hospital visits and ambulances.”

Merry’s forward planning in ordering the handmade clay roof tiles meant that the builders could continue on site with relatively few delays, however, and Ben’s colleagues kindly stepped in and carried on organising other jobs such as weatherboarding the utility room, and arranging for the wood wool panels to be fitted. “We had ordered our handmade oak windows months before and these were delivered and fitted,” says Merry. “Ben had to find time to go up to the house to oil them all because the weather was supposed to be getting worse, and we were desperate that they should be protected using our chosen natural oil. It was only at this stage that we realised we’d completely overlooked the fact that the windows needed to be glazed!”

When it came to designing the interiors, Ben and Merry still needed to work out the finer details, such as paint colours, and based many of their decisions on cost and ecological considerations. They would have loved oak floorboards throughout the cottage, but needed to economise and chose to lay them only in the sitting room, with black limestone tiles in the remaining ground floor rooms over underfloor heating. They also chose free-standing hand-painted kitchen units, teamed with a mixture of maple and granite worktops, which they can add to in the future if necessary.

Despite their limited budget, the Albrights were keen to make sure that the house would be as environmentally friendly as possible, and as well as ensuring that their new home is highly insulated, natural, recyclable, reclaimed or renewable materials were chosen throughout including lime render and mortar, and copper guttering, which feeds into rainwater butts. Local craftsmen were commissioned to make their oak doors, windows, wardrobes and the fire surround, and a blacksmith crafted the window latches.

The cottage is a passive solar design, with no northfacing windows and large glazing to the south and west to harness light and heat, and the black stone floors act as a heat store. The oak frame will last for hundreds of years, while the SIPs provide unrivalled insulation values. Other than the foundations, there is no cement or concrete in the design, and the house has been furnished with second-hand junk shop furniture, natural paints and waxes, and low-energy lighting, whilst native and wild planting ensure that the former brownfield site is now a haven for wildlife.

“We’d been living in a studio in my parent’s garden during the build, but Ben and I were determined to move into our new house in time to host a party for Minnie’s first birthday in October, which meant that the last week was fairly frantic,” says Merry. “The builders laughed when I said we were moving in, and were quite surprised to find Ben and I in our pyjamas when they turned up for work the next day.

“In the end it all came together perfectly, and although our budget took a bit of a free fall – mainly due to the problem with the foundations – we did try to save money in other areas. We now have a beautiful home with loads of space in a wonderful village. Minnie adores exploring the cottage and is flourishing in leaps and bounds – and I’m very happy that she will grow up in an oak framed house built by her parents, just as I did.”