When Matthew and Lesley Borowiecki decided to build their own eco friendly home, they arranged to import everything from Lithuania — including the timber frame, the kitchen, sanitaryware and even the tiles. The result is a stunning timber, steel and glass house, built in record time and fitted with some distinctive sun-screens which gave the new home its name: Sail House.

“I’ve actually lived in this part of South London for most of my life,” says Matthew, whose family originally descends from Poland. “I used to pass by a bungalow high up on Forest Hill on my way to work, and so when I saw that it had come up for sale I jumped at the chance to buy it and applied for planning permission to construct a replacement house there. The views of the city from up here are fantastic, and it is somewhere that I have always wanted to live.”

Matthew and Lesley took a gamble and purchased the bungalow without any planning permission, convinced that they would be allowed to replace the small infill property with something altogether more substantial in a street of otherwise conventional 1920s villas.

In 2005, they applied for consent to demolish the bungalow which stood on the site and erect Sail House — a five bedroom, three storey eco house, imported from Lithuania as a prefabricated timber frame kit.

“We didn’t want anything fussy, and the house is really quite a simple layout,” Matthew explains. “It only appears to be two storeys from the front because it’s built into the side of the hill, and inside it feels rather like being on top of a cliff at the seaside.

As an architect, Matthew was able to design the new house with input from the whole family — creating computer-generated 3D models to show them exactly how it would look.

The Borowieckis’ contemporary 300m² home has enormous gable windows under the eaves, which are shaded by extraordinary textile ‘sails’. There are also opening roof vents to help keep the house cool in summer.

For recently married Matthew and Lesley, this is the first time they have shared a home, and the couple also live with Matthew’s son, Ben, who has just taken his A-levels, and Lesley’s children, Nathan, who works in media, and Bethany, who’s studying architecture.

“The whole house has been designed around the family, and the children’s rooms are all on the ground floor,” says Lesley. “It also means that this floor has the potential to become a self-contained apartment with its own separate entrance in the future.”

The house is built into the side of the hill over three storeys, with the main entrance on the first floor where the kitchen and open plan living/dining areas are. The children’s rooms are on the ground floor with private entrances, while the master bedroom is at the top of the house, and there are additional studio spaces for working at home. The look is contemporary and open plan, with white walls, exposed structural timbers and large amounts of glazing.

“I’ve known one of the owners of Janes Homes for many years, and when we discovered that the company was about to start offering bespoke, timber frame kit houses from Lithuania, we decided to allow our house to be the prototype,” explains Matthew. “Prices are far lower over there, and Lesley and I went on three trips to Lithuania and shopped for everything we needed — right down to the door handles and kitchen appliances.”

Virtually everything was imported, and coordinating the deliveries proved to be one of the most difficult elements of the project. Matthew needed to arrange for the road to be closed when the trucks arrived, and a crane was hired to lift the huge glulam timbers and prefabricated infill panels into place. “Fortunately the deliveries didn’t all come at once, but we had to make sure we ordered carefully because taking things back to a builders’ merchant in Lithuania wasn’t really an option,” laughs Lesley. “Importing the timber frame, fixtures and fittings saved us around 20 per cent on UK prices, but it did mean that we needed to be really organised when everything was delivered.”

The Borowieckis used Lithuanian labour to assemble their prefabricated Lithuanian house — although the cost of putting the men up in London did mean that they didn’t actually make any significant savings for this element of the build. The whole project took just six months to complete and went extremely smoothly, despite the sloping nature of the site.

The family found it satisfying to watch as the main structure of their new home was erected in just four days. Everything had been packed onto the trucks in reverse order so that, once unpacked, the materials were in the correct sequence to minimise both time and effort.

“We were working during October, when there were quite high winds, and at one point we did worry whether we could actually continue,” Matthew recalls. “We were also up against it because hiring a crane costs thousands of pounds each day, and the road could only be closed for a limited time. The men worked until ten at night to finish, though, and the build attracted quite a crowd of onlookers.”

The timber frame of the house was made using sustainably farmed wood and is massively insulated, with triple-glazed, argon-filled windows. An advantage of prefabricated construction is that there is only around five per cent waste, whereas on most building sites about 20 per cent of the materials end up being thrown away.

Large solar panels on the south-facing slope of the roof provide around 60 per cent of the family’s hot water, and the Borowieckis also harvest rainwater from the roof to use in the garden. Underfloor heating can be controlled by room thermostats and most of the lighting that has been used throughout the house is low-energy LED.

Coloured display lights, white lighting and features such as rope lights and hanging fluorescent tubes create a vibrant effect in the main living space. “With so much glass we rarely need to turn on any artificial lights during the day,” says Lesley, an artist. “The house was orientated so that it gets morning light in the kitchen and evening light in the living room.”

The panoramic views from the house are truly incredible, and the Borowieckis can see for miles across South London and as far as the city and the West End. This was the main reason for positioning their living room up on the first floor, and the balcony makes a perfect vantage point for watching the lights at night.

“The problem with so much west-facing glass is that it could become very warm indoors as the sun sets in the evening,” remarks Matthew. “We have overhanging eaves, which help, and the triangular sails, which are such a feature of the house, shade the house from the sun when it gets even lower. They’re strung on halyards and can be put up and down using a block and tackle system, exactly like the sails on a boat. If it’s a very windy night we can bring them indoors to store them — it’s rather like being on board a ship!”

Shading a House From the Sun 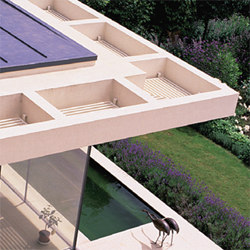 Whilst Lesley and Matthew have used enormous textile ‘sails’ in order to prevent their house from overheating, a more conventional approach is to construct a ‘brise-soleil’ (RIGHT), literally meaning ‘sun breaker’ in French. Designs vary, but in their basic form brise-soleils are made up of a horizontal projection that extends from the sunniest façade of the house. This prevents buildings which incorporate large amounts of glazing into their construction from overheating during the summer months. Louvres are often built into the shade in order to prevent the high summer sun from falling on the façade. They also allow low winter sun to enter the house, providing some passive solar heating.