Building his own zero-carbon home has been a long-held ambition for architect Steven Harris, who’s been championing this solution since helping to design Britain’s first zero-carbon houses alongside ZEDfactory in the early 2000s.

Steven’s wife, Catherine Roberts, also an architect, was equally keen and, as a result, their clever design proves just how achievable a low-running-cost home, built from ordinary building materials, can be. The critics might say such design ideas have to come at a cost, but the couple have completed their home for just £175,000.

Back in 2005, the couple decided to leave London and purchase a plot in Wales to be closer to family. The orientation of the site they found was ideal for a zero-carbon house, allowing the couple to create a glazed south-facing elevation to take in the best of the views and the sun’s heat. Steven and Catherine’s planning application sailed through and they raised funds for the project through the Ecology Building Society. 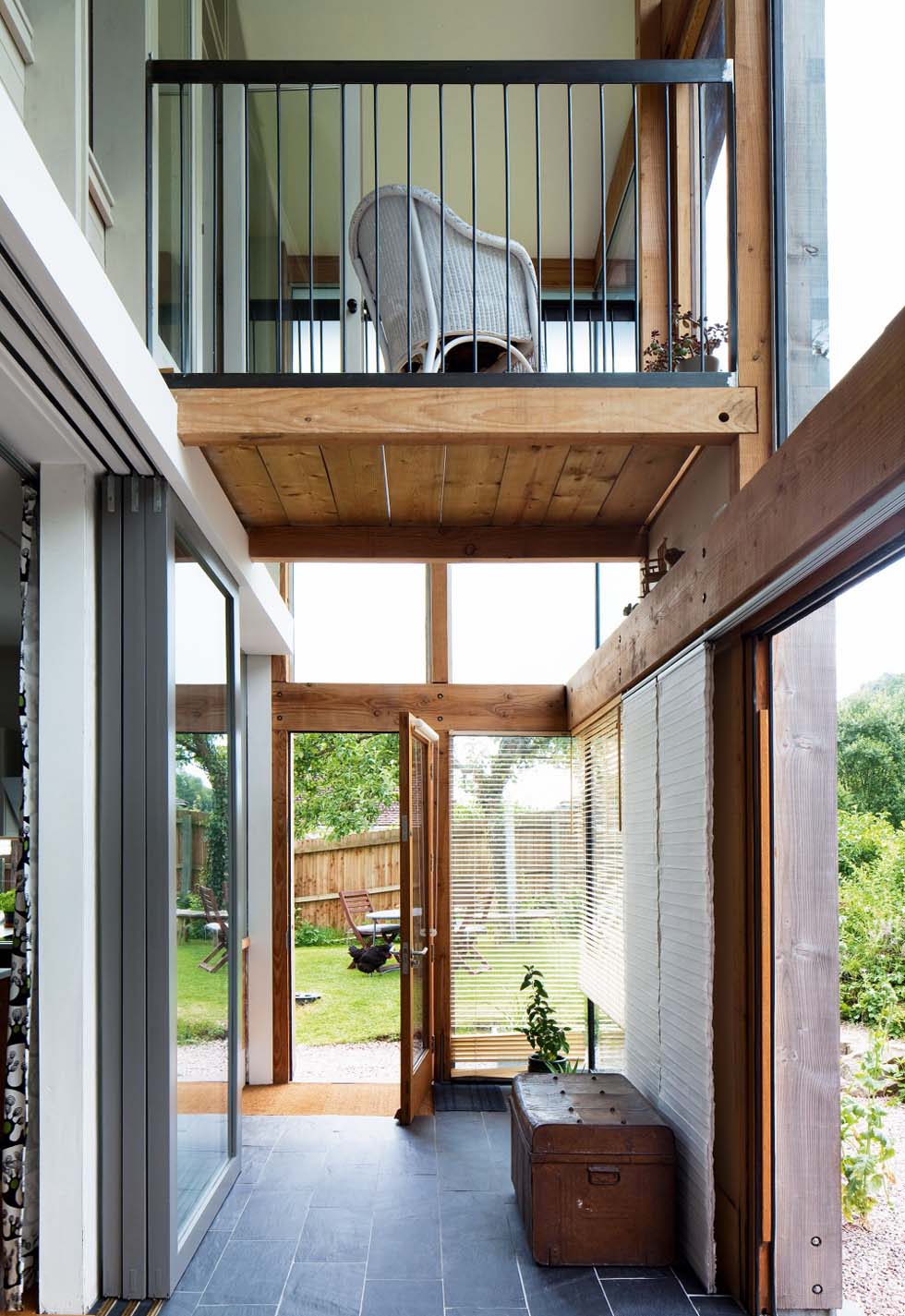 The couple saw the advantages of designing a house that requires so little energy that it can run solely on renewables alone. Not only would it be cheap to live in, but also the most environmentally friendly option. The resulting house owes its success to three key design points: it takes reference from the vernacular by using a similar palette of materials, interpreted in a contemporary form; it has flexible space for the needs of their growing family; and, of course, it’s a zero-carbon build.

The couple thought about the stages of family life and how the house would need to adapt, then planned their home accordingly. One example is the children’s bedrooms. When the couple’s two children were young they shared a room, but designing in a partition wall now allows them to enjoy their own separate spaces.

It’s a similar story on the ground floor, with one big kitchen/dining/living area divided from the office by sliding screens. This means the office can also be used as a guest room (serviced by the downstairs toilet and shower room). 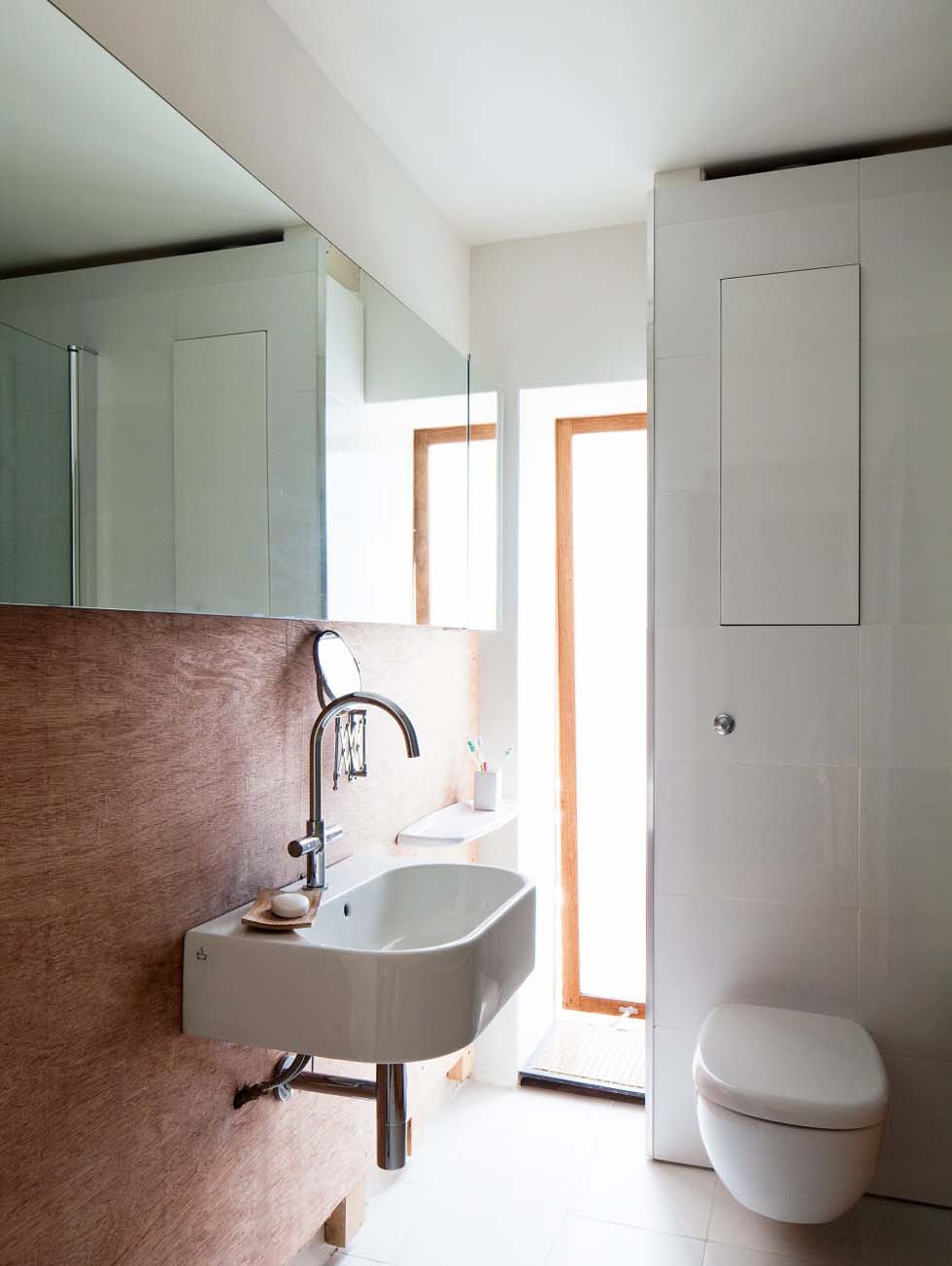 Frosted slot windows in the bathroom draw in plenty of light but offer maximum privacy. The basin is from Bathstore and the WC is from Ideal Standard. The walls are clad in wood, providing warmth against the white sanitaryware

Creating a highly-insulated, airtight build was essential. To do this, they kept it simple: the house is built with standard blockwork cavity walls, with a 300mm cavity – rather than 100mm – stuffed with Rockwool cavity batt insulation. The blocks are lime rendered externally, and internally the walls are lime plastered and decorated with clay-paints. The lime regulated humidity and makes for a comfortable environment. The house is defined by two super-insulated ‘bookend’ concrete blockwork walls, which support a pre-stressed concrete plank first floor, creating thermal mass. This is important in the zero-carbon design as the passive solar gain – entering through the south-facing glass elevation – is absorbed into the walls, stored and gradually emitted back into the house.

The inner glass skin is an important aspect of temperature control inside the house. When the weather is particularly hot, the inner doors can be closed and the outer set left open. With such an airtight structure, a heat recovery ventilation system was specified to provide the house with fresh air. The system is powered passively by a wind cowl on top of the house rather than electric fans, which use carbon energy.

The home also features a solar thermal array and a woodburning stove with back boiler; the latter is fuelled from off-cuts provided by a local tree surgeon. Both are connected to a thermal store that provides all the hot water and space heating needs for the house. In addition, solar photovoltaic panels have been installed to provide electricity for the home. Steven, who also runs an energy-efficiency and renewable energy consultancy (Steven Harris Ltd), monitors their energy usage at home closely. 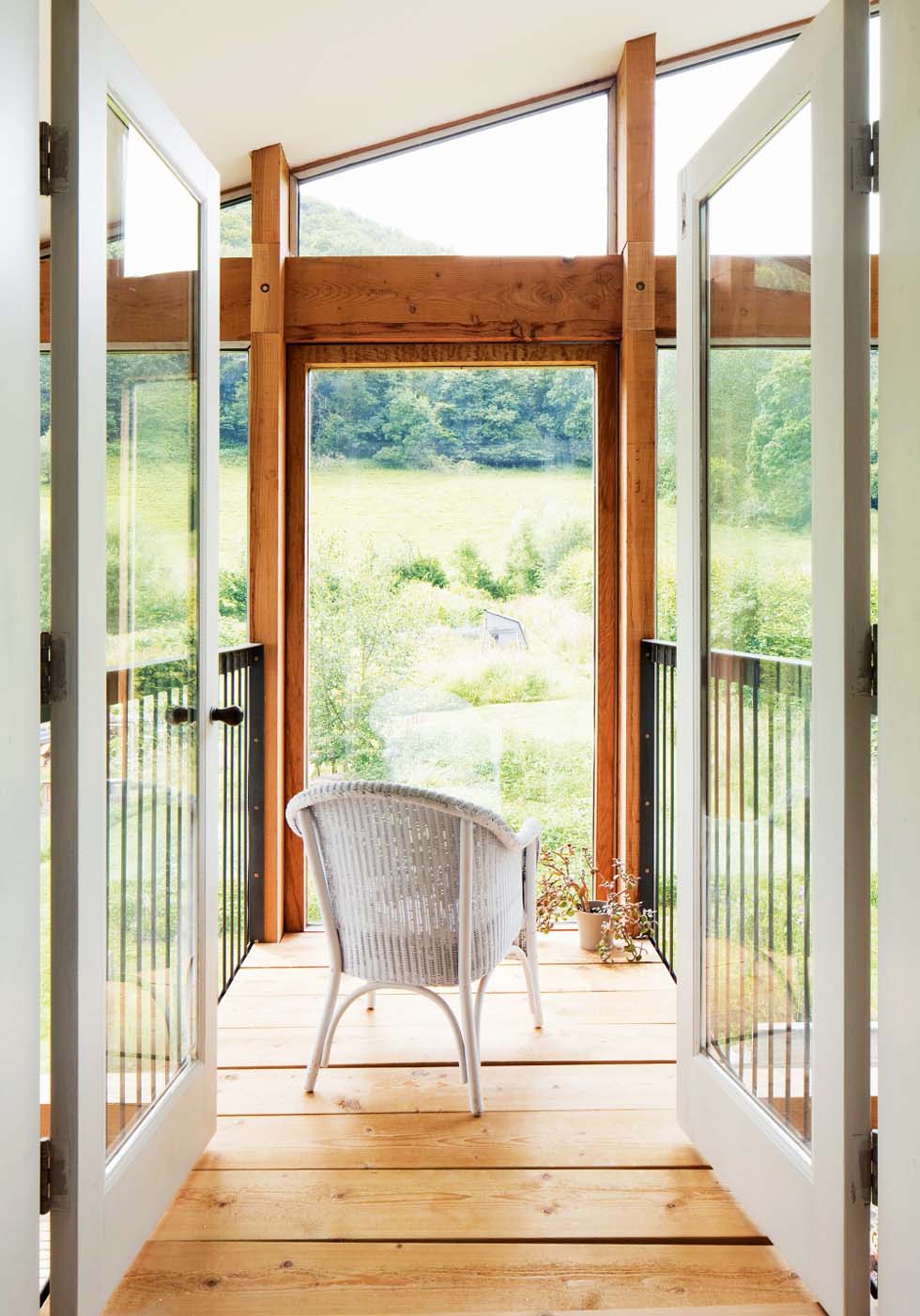 Upstairs, a walkway leads from the master bedroom and bridges the double-height space, creating a fantastic viewpoint and spot to relax

When the build got going in 2006, the couple managed the project remotely, spending many weekends travelling up from London in their campervan before moving into the part-finished house before it was fully habitable. “It was tough, but we knew from the start that progress would be slow,” says Catherine. “We wanted to project manage and do as much of the work as we could ourselves, and then in 2009 we set up our own business, CRSH Architects.

They made sure the design fit in with how the trades build, so that their weren’t complications or hidden costs. The tradesmen were able to work efficiently from the detailed drawings which Steven and Catherine had produce, making the process much more predictable.

Eight years on from first starting on site, the couple acknowledge that there are still jobs to finish – like the green roof on the workshop – but they’re absolutely delighted with how the project has come together. And, they have shown that you can build a flexible, comfortable and high performance home, for a very modest budget.