The remarkable design of Chris and Becky Taee’s new home in a tranquil valley in Hampshire is the result of Chris’ brief to ‘be bold’. The architects, Birds Portchmouth Russum, came up with a three-part house, with the central feature a stunning curved vaulted dining hall.

Yet its innovation is not limited to its looks — Chris tirelessly researched new building techniques, with the home built out of cross-laminated timber (CLT) and having not one but two plant rooms for all the energy-saving technology.

It is a hugely ambitious project, which is why we chose it as the winner of our Most Innovative Project category in the Self Build Awards 2012.

The site in question was one of three small properties that were tucked away at the end of a private track, a couple of miles from the nearest village in a peaceful hidden valley on the Hampshire/Sussex border. In the heart of the South Downs National Park, the Victorian flint-clad cottage had been under the same ownership since the 1960s with a long-term view to restoration.

Unfortunately, shortly after he started, the owner sadly passed away. It was then sold on to a local developer who demolished most of it, before Chris and Becky took a big leap of faith and bought a ruined wall and a large pile of rubble in 2009. 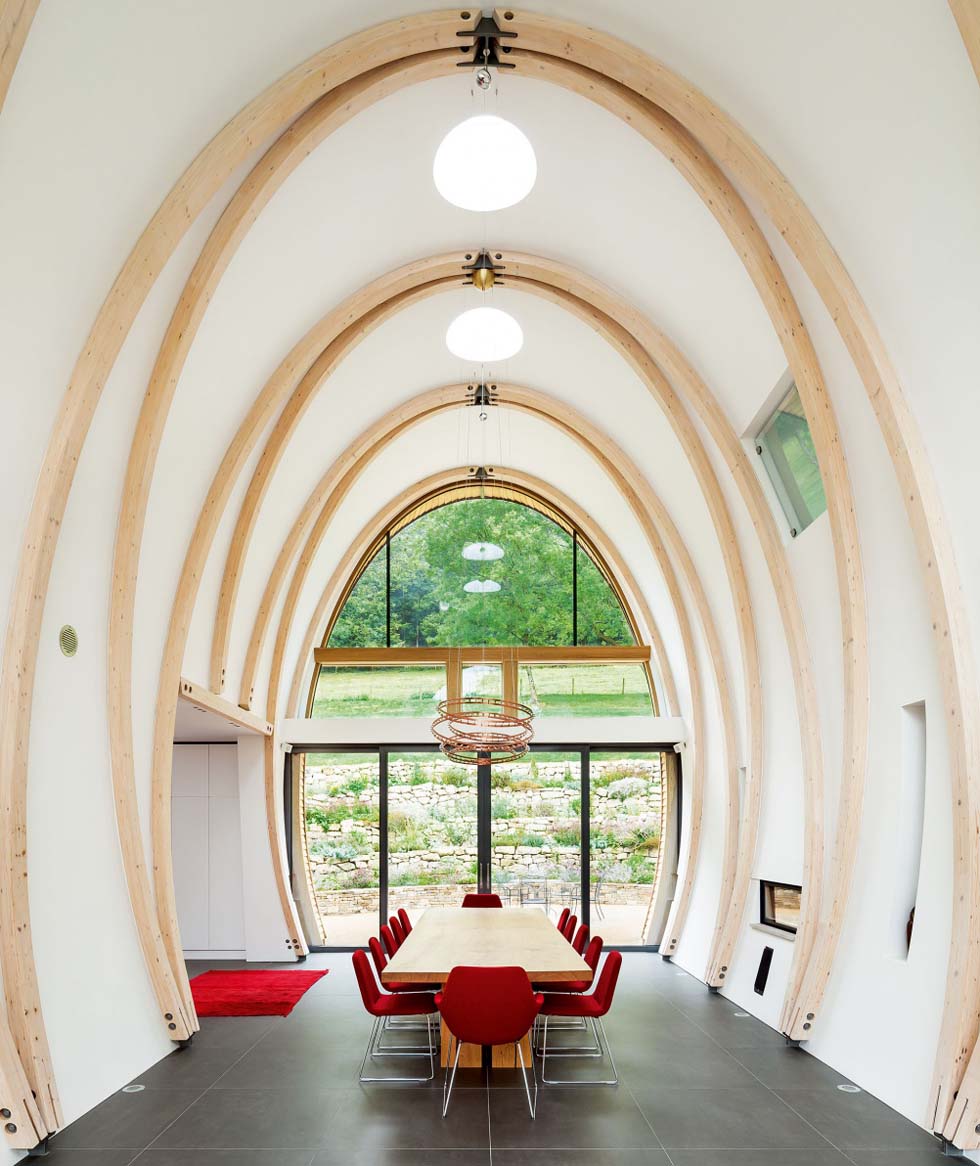 So how does one go about building a 600m² home of almost impossibly bespoke design at the end of a very steep track in deepest Hampshire? “We managed it ourselves,” begins Chris. “I took a couple of years off work and ran it as I would any other project, with me directing in collaboration with a very talented, hand-picked construction management team.

So, without a main contractor, everything was done on subcontract packages, or agreed day rates. Everything was so bespoke and new to the people doing it, that it needed our attention all the time.” 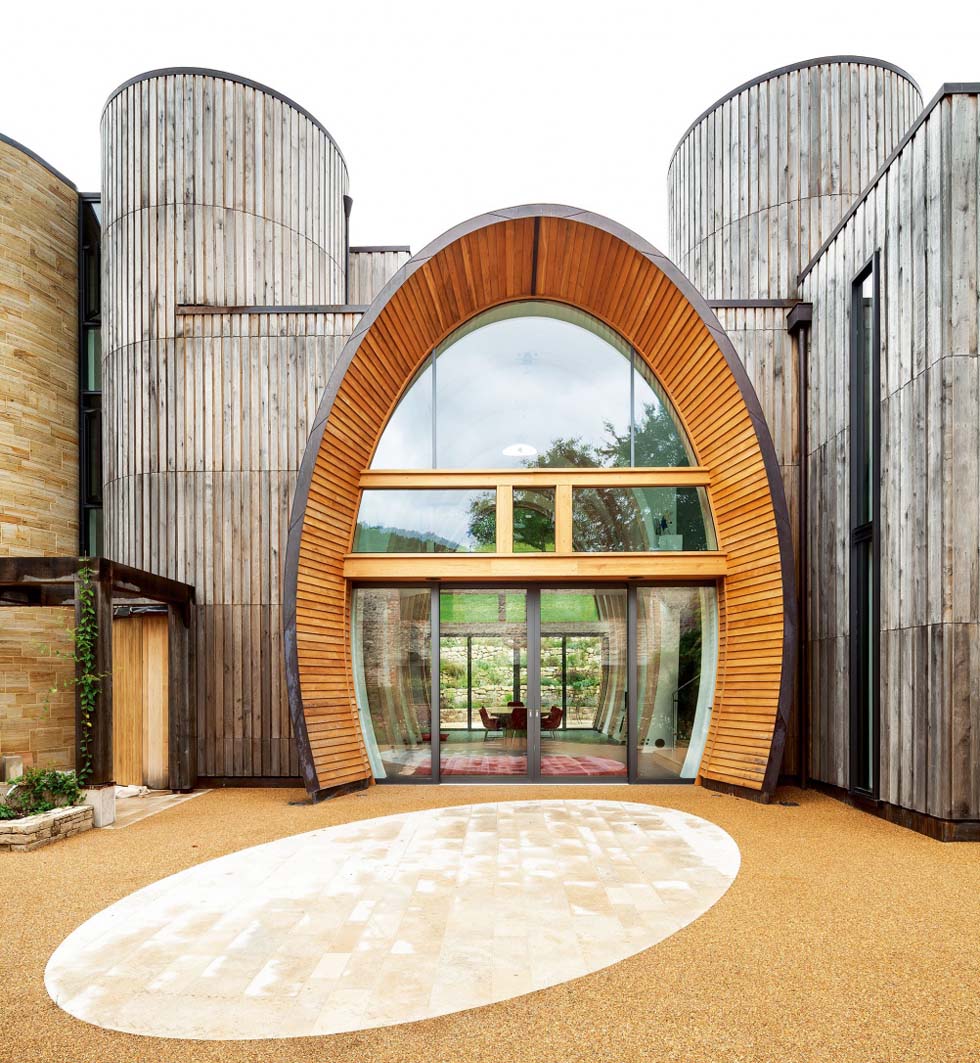 Chris sourced their CLT – which is known for its stength, airtightness and stability – from Eurban, who imported it from Schilliger Holz in Switzerland. “Travelling to Switzerland to see it being built was a very inspiring moment for us,” says Chris. 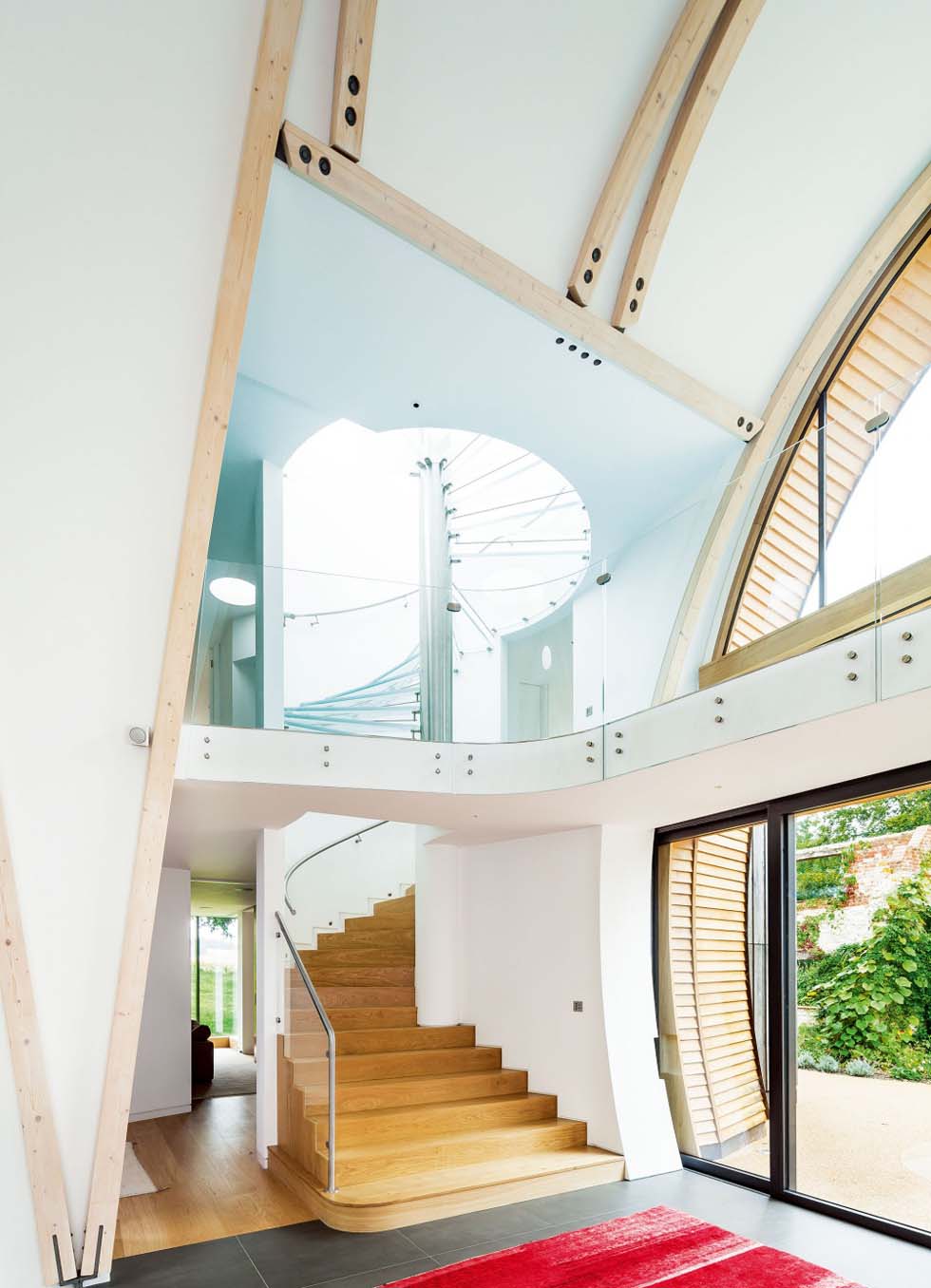 The glazed landing and staircase, with balustrading from Saxum, links all three parts of the house at ground floor level

Despite its size, part of the innovative approach to the house was to make it as energy efficient and airtight as possible. Chris specified two Awakdukt Thermo ‘earth pipes’ from Rehau — they work in a similar way to a ground-source heat pump, but use the latent heat in the ground to pre-heat (or cool) fresh air going into a mechanical ventilation heat-recovery unit. While they can reduce heat demand by up to 20 percent, they are also really well served for cooling in the summer.

There’s also a 22kW ground-source heat pump running off three-phase electricity (which is used as an efficient way of delivering heavy loads) which supplies all the domestic hot water and the underfloor heating. The house has its own water supply courtesy of a 250-foot borehole. All of this kit is held in not just one but two plant rooms, connected by nine 150mm ducts — it is a very well thought-out engineering operation.

Chris has, undoubtedly, pushed the boundaries of design and house engineering, as well as displayed a tireless dedication to getting everything done absolutely right. To the outsider, looking at a house of this scale and quality is all a little bit overwhelming — but the result is hugely admirable.