Nick Fisher and Jo Jordan’s astonishing new home, built without formal plans on a DIY basis, is remarkable inside and out.

“We wanted to replace the house we inherited with something a bit different,” says Jo Jordan. After a few hours snooping around Belle Grove Farm, Jo and husband Nick’s astonishing new home in Suffolk on the site of the old 19th century family farmhouse, you realise that Jo might just have a talent for understatement.

For the new house that Nick and Jo built is brilliant in its execution – more of that later – but also brilliant in its process. For this was a project without conventional design (no architect was involved), an unusual route for planning permission (no formal drawings were produced) and a distinct lack of building drawings to follow. Nick stick-built the house himself as he went, working the oak as required and using the local building inspector on notice, meaning that they would check each stage of the work after it was completed.

It all started for Nick and Jo with an old copy of Perspectives in Architecture, a short-lived magazine from the mid-90s. “We were flicking through it and came across a very interesting sketch,” explains Jo. “Apparently it was for a house in Russia that never got built. We thought it was intriguing and it planted a seed in our minds.”

So when the family farmhouse came into their hands, Nick and Jo knew what they wanted to build. Their first port of call, then, was not a conventional architect but instead their friend, the architectural modeller Nigel Purdy, who specialises in creating modelled visualisations for clients in the commercial and domestic fields. “Together we developed the entire concept from that initial sketch, inside and out,” explains Jo. 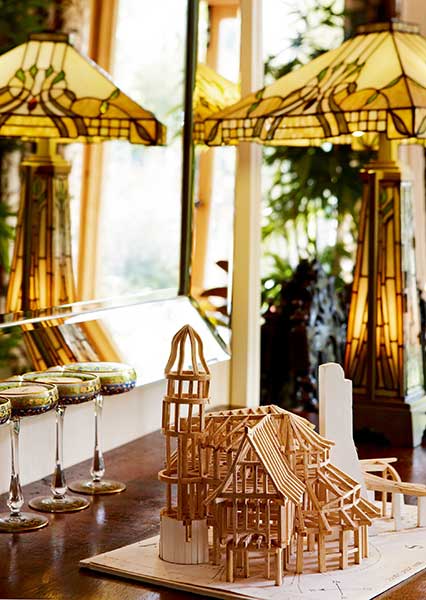 The couple sourced all their materials themselves. As Nick explains, “the oak for the main frame was sourced from France, where our requirement for the straight 10m lengths in the main living area posed no problem. A twisted elm tree trunk, found in a ditch, forms the central non-structural column which we basically built the house around, while seven 40ft and perfectly straight Douglas fir trees were used as poles for the structural frame of the tower.” 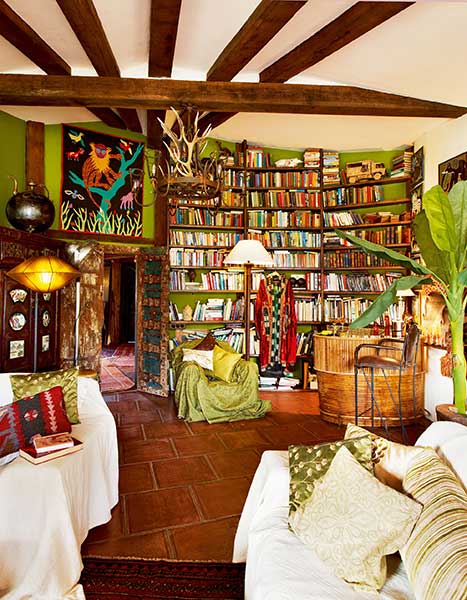 For all that is remarkable about outside, however, it is the interiors that are quite possibly the biggest achievement of all. Nick and Jo spent 30 years running the unique overland expedition travel company Trans Africa and hence every room is a treasure trove of exotic-looking art, maps and artefacts, all adding to the unique character.

Best of all, Nick and Jo took a shopping trip to Jodhpur in India, famous for its reclamation yards, and found all sorts of interesting and great-value items — the highlight probably being the green/blue marble now used in the en suite, bought for just £3/slab. “Importing from India was easy,” explains Nick. “Shipping a container-load full of items cost us £1,500 and was organised very easily over there.”

Having been in less than a year, Nick and Jo still appear slightly dazed by the whole experience; and it’s hardly surprising. This true one-off is the most astonishing example of how vision, guts and a bit of blind enthusiasm, coupled with a remarkable belief in one’s own character, are really all you need to produce a dream home. Belle Grove Farm is truly an exposition of its owners’ adventurous lives, and is all the more amazing for it.