A Modern, Efficient Self Build on a Stunning Site | Homebuilding & Renovating Skip to content Angus and Kirsty McKellar certainly had their work cut out when they decided to build their new home on “32 acres of rocky, heathery hillside” on the Hebridean island of Harris. But the couple (both GPs on the island) were bravely undeterred by the harshness of the exposed rocky, boggy landscape and pinpointed a site on which to build their two storey – three including the attic space – six bedroom family house, which cleverly marries cosy and contemporary touches.

“We wanted a traditional and modern mix,” explains Angus. “We originally had in mind our own concept of a two storey square house, but when we spoke to our architect, Simon, he quickly talked us out of it because half the house would have faced north and he knew it just wouldn’t work. When Simon did present us with his finished design we were delighted — it made full use of solar gain and it is indeed warm inside all year round.”

This may come as a surprise considering the house’s extremely exposed location – on a peninsula head – with three sides of the house facing the sea. The site is actually part of a croft that was purchased for £20,000 by Angus and Kirsty, when the couple relocated to the island from their previous home in Nepal in 2002. “Crofts don’t come up very often and so when this one did we jumped at the chance,” recalls Angus. “With crofting, you’re buying the right to be a tenant and once you’re renting a croft you can’t simply be sent off it — the crofting laws are fairly robust. We pay a nominal rent of around £80 a year and when we decided to build the house we feued off the house site (for about £100), which is around a quarter of an acre, because technically you can’t get a mortgage on land that you don’t own.”

This process seemed straightforward enough, but once it came to submitting plans for a two storey house things became a bit more complicated. The couple were initially informed that approval wouldn’t be granted. However, after several visits to the site with the planners, Angus managed to persuade them that this free-standing design made perfect sense and from then on the process ran smoothly in terms of planning and Building Control.

The house’s construction, which began on site that November and took nine months to complete, was built via a bespoke timber frame with a steep-pitch Spanish slate roof and white render and Staffordshire slate blue smooth industrial brick finishes. A main contractor and clerk of works carried out the Scottish Minor Works contract, and Angus himself took on a supervising role. “It took a lot of input and there were challenges but we overcame them,” he remembers.

One of the challenges involved bringing in the electricity over 200m — a logistical headache which proved to be expensive. Angus also found out that it wasn’t possible to install a septic tank. “If you build outside a sewerage area you have to do a percolation test before you can get planning — this involves digging a hole in the ground and filling it with water to see how quickly the water drains. I dug the hole and didn’t have to fill it — it filled itself and never drained away! In the end we had to construct a soakaway system.”

Despite a few hitches and glitches, the couple managed to complete the build within their £225,000 budget. The house essentially follows a T-shaped plan, with the main entrance located in the eastern elevation. “The main access is an informal one via the back door,” says Angus. A central hallway leads to the open plan kitchen and dining area and spare bedroom-cum-office in the eastern elevation with a separate lounge in the south-west-facing wing. Directly above this area are three children’s bedrooms with an additional bedroom and the master en suite located in the eastern wing.

Extra space for the children has also been created in the attic space, which features a study, a snug TV area and a music room. “The study has a bigger window and that’s the only part of the attic that we’re in during the day — it’s not such an attractive space because of the lack of light. We didn’t put Velux roof windows in as we didn’t want to give the impression that it was a three storey house. But from a Building Control point of view, it’s three storeys so we incorporated self-closing fire doors.” The attic space doesn’t include the underfloor heating that features on the two main levels of the house but it has insulated plasterboard and gains a considerable amount of heat from the rest of the house.

Angus and Kirsty sourced most of the interior fixtures and fittings themselves. “We got the idea for the ceiling beams effect from a magazine,” says Angus. “We sourced the bathrooms, oak kitchen and most of the materials, including the ceramic floor tiles, locally in Stornoway. Overall we favoured neutral tones as our aim in life isn’t to decorate — we just want to enjoy living here!”

Angus admits that the balcony above the south-facing solar space is a favourite spot. “We use the balcony a lot. It’s lovely apart from the midges, which means that you can’t sit there on a calm summer’s day! But there are actually very few days where there is no breeze here because the house sits on such an exposed site,” he says.

Angus concludes: “The house is fantastic. I’m still astonished that we’re in such a place. What we’re enjoying doing now is getting to grips with the land around the house which has been great fun. We’re planting shelter belts and a drystone wall. It’s been a lot of work, but we knew it would be. And I believe that these things come at the right time of life, don’t they?” 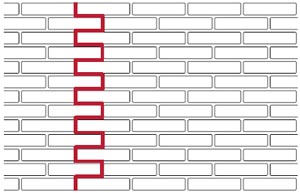 The use of brick fell distinctly out of fashion on self-built contemporary homes many years ago, cast aside amidst a Modernist love affair with metal, glass, concrete and white render; but with modern manufacturing techniques now capable of producing such a linear, near-homogenous product, the humble brick has recently enjoyed a revival in a contemporary context, adding character to large, otherwise stark expanses. While on period homes the use of interesting brick bonds (the pattern of laying brick heads with stretchers) is critical, on a contemporary property where lines are cleaner, a simple stretcher bond (diagram right) will suffice — maintaining aloofness, yet cleverly introducing a different texture and subtle depth from shadows cast into the mortar recesses. The McKellars used a slate-grey shade of brick to match the roof, but a traditional reddy colour can also be used to great effect — just ensure the mortar colour is light and neutral.