A Handcrafted Home for just £100,000 | Homebuilding & Renovating Skip to content Robin Cochrane didn’t choose the easiest plot on which to build his own home — not only does the new house sit on a restricted piece of land on the banks of a river in the Scottish Highlands, but it’s also built directly over a stream.

“My parents owned the land and built their own house about 100 metres further along the road a few years ago,” says Robin. “They offered me the opportunity to build on their yard, which had been used for chopping wood and storage, but I doubted there would be enough space for a house as it’s a really tiny scrap of land with a stream running right across it.”

Robin considered erecting a simple log cabin on the 400m2 site, but was unable to obtain planning consent for a timber structure; the planners preferred to see a rendered property with a slate roof in what is effectively a national park. Instead, he has built a contemporary home, which takes cues from the local vernacular — all for a tight budget of just £100,000.

Planning permission for the one-and-a-half storey house was granted in 2010. Architect Nigel Johnston – who had designed Robin’s parents’ house – developed an interesting concept for a low-slung, horseshoe-shaped house built over the stream. Insulated concrete formwork (ICF) would be the construction system of choice.

Robin had been involved in building his parents’ home using ICF and was therefore already familiar with the process — although constructing his own property brought with it some very site-specific challenges, including creating a culvert (underground watercourse) to channel the existing stream. 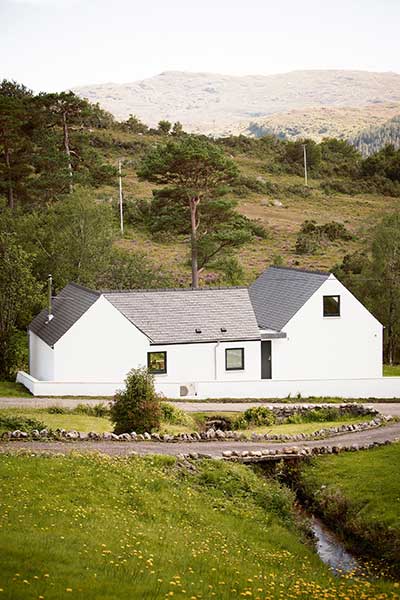 Building to a budget

With a fixed and limited budget of £100,000, Robin was determined to undertake the majority of the work himself. “I did a lot of research online and thoroughly read up about each stage of the build — from start to finish I pretty much built the whole house,” he says.

The kitchen-dining area. “I got a price from just about everyone in Britain for everything
in the house and I haggled a lot, which saved at least £20,000,” says Robin

“I had a friend come in with a digger to help with the foundations because the ground conditions were a nightmare, with huge boulders everywhere. But once the trenches were started, I went in with a spade and finished them by hand.”

A family friend helped to lay the blockwork foundations, which form part of the riverbank itself. Following such help Robin worked mainly alone, building the ICF walls, pouring concrete floors and constructing the roof — which proved to be the most enjoyable element of the entire build.

Family and friends were on call to help with certain aspects of the project,
including the glass sliding doors

Glazing, including the heavy sliding glass doors which open onto a sheltered terrace, was installed with help from Robin’s father. The grey hardwood-framed windows are a particular feature, and the house has been cleverly designed so that it enjoys far-reaching views through large expanses of glazing without compromising privacy.

“I got a price from just about everyone in Britain for everything in the house and I haggled a lot, which saved at least £20,000,” reflects Robin, an electrician by trade. Although the house was built on a budget, Robin refused to scrimp, and managed to include features such as a home cinema and music system, as well as an air-source heat pump which runs the underfloor heating.

Robin not only took on the majority of the building work himself, but also crafted his own furniture, including the dining table

Striking engineered blacknut flooring, which was laid (again by Robin) across the majority of the ground floor rooms, is now the backdrop to Robin’s own handcrafted pieces of furniture — including the dining table, beds and bookcases. This project really is a true self-build in every sense of the word.

“Building in such a remote location did mean that deliveries were often delayed, which was frustrating, but it’s a small price to pay for living in such a beautiful place,” he smiles. “Now I spend far too much time just sitting looking out of the windows and enjoying the view.”