In a quiet suburban road in Cambridge, Hugo and his wife, Hajni, have built a striking, category-defying new house. The city of Cambridge has a reputation for spawning cutting-edge architecture — but none quite like this. A stunning Modernist glass-box is a stark contrast to the ethnic eco-house feel of the cedar-shingled front addition. Yet, the house is seated so cleverly on its plot that, despite being surrounded by Victorian and Edwardian villas, it doesn’t jump out at you at all, and many people travel up and down this road without even noticing it.

When Hugo and Hajni’s two children started school in Cambridge, the couple decided to up-sticks from Essex and start searching for a new home. Although they had considered self-building in the past, they had no intention of self-building in Cambridge as city plots are a rarity. Yet, when they found a tired looking 1940s house for sale, the idea resurfaced. There was a lot of interest in the house and the couple ended up getting involved in sealed bids — which they won with an offer of £475,000. 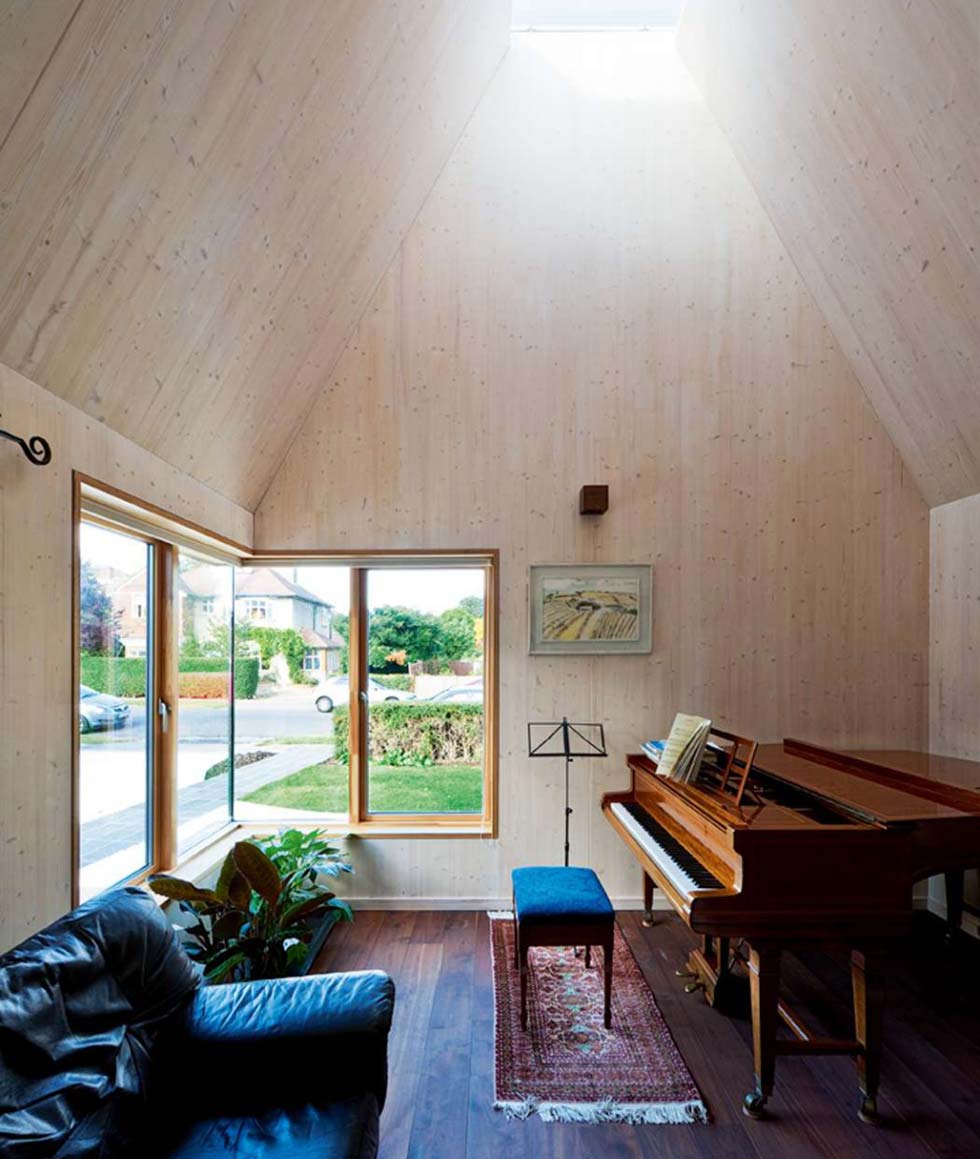 The study’s pyramidal shape allows light to percolate from above, storing heat in the huge mass of the concrete subfloor

The couple had been through the house design process twice before, hence they had a pretty good idea of what they wanted from their new home. They started by interviewing three local architects and very quickly established a rapport with Meredith Bowles, who runs Mole Architects. Meredith has gained an enviable reputation for designing highly contemporary, low-energy homes and Hugo and Hajni were struck by his attention to detail and his good grasp of what they were looking to build.

They spent the best part of a year building up to a planning application, expecting the worst with such a radical design. When the plans were finally submitted, there were several letters of objection from residents (and also a few in support) but the planners were broadly supportive. The decision went to committee and was passed narrowly first time. After a tender process the couple selected the Cambridge Building Company to act as the main contractor. The company were chosen on a personal basis, coming as they did with a reputation for undertaking much of the finest residential work in and around Cambridge. 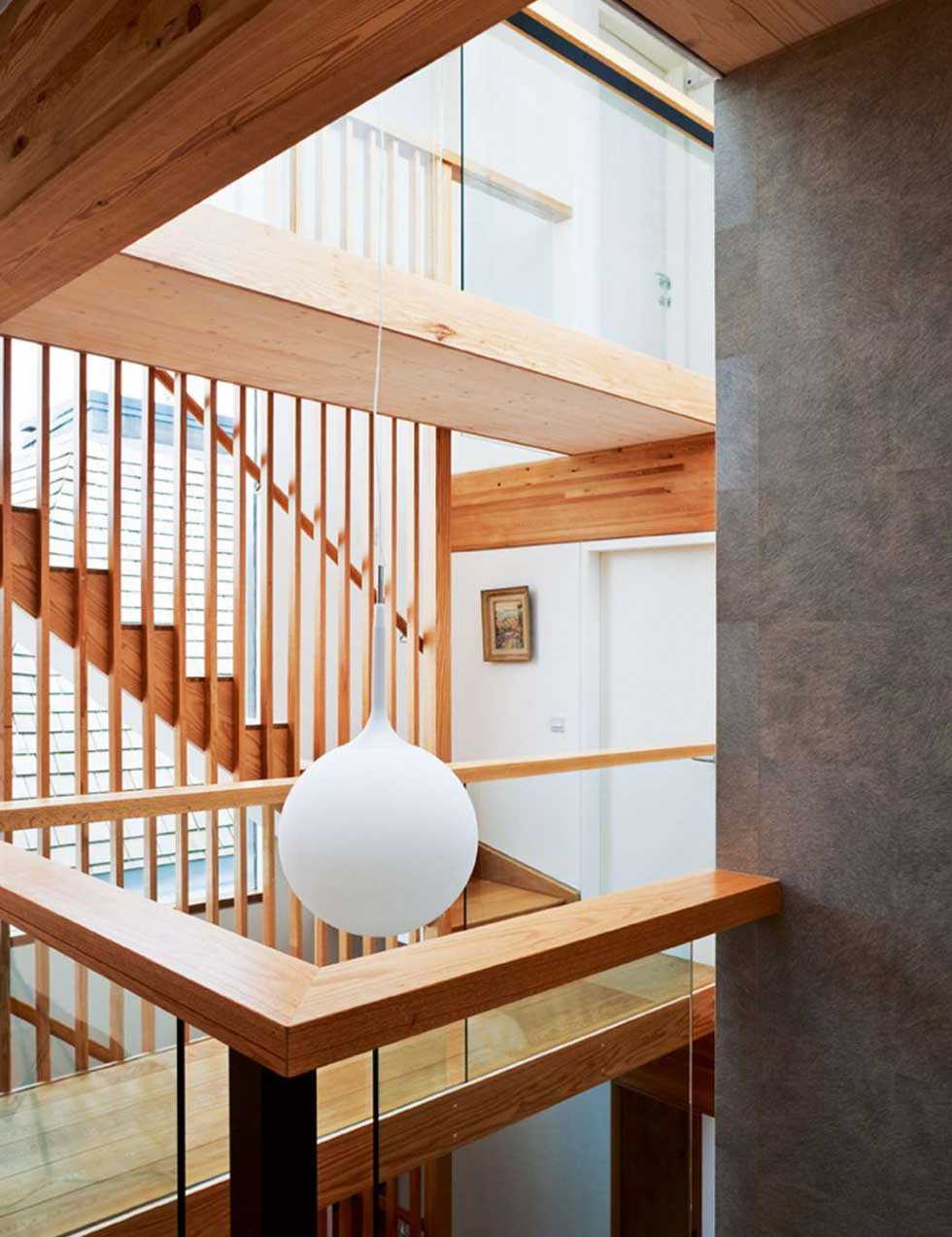 The striking oak staircase was crafted by Cambridge Joinery, with a tall louvred baluster running through all three storeys — creating an internal brise soleil

Whilst the house is a timber structure, it’s not a timber frame; it’s made up of prefabricated solid timber panels from Austrian company KLH. This is one of the first homes in Britain to be built using this method and it came with a small cost penalty over conventional timber frame. Despite this, “the advantages were clear,” says Meredith. “A solid timber wall is inherently robust and reduces the number of joints, thus making control of infiltration losses far easier. It also allowed for some beautiful rooms, with exposed timber ceilings and walls coated with translucent white Osmo stain.”

The house itself is arranged over three storeys, with living spaces on the ground floor, and bedrooms and bathrooms on the upper floors. The circulation space revolves around a double-height oak staircase which has a rooflight above, enabling light to pour in. 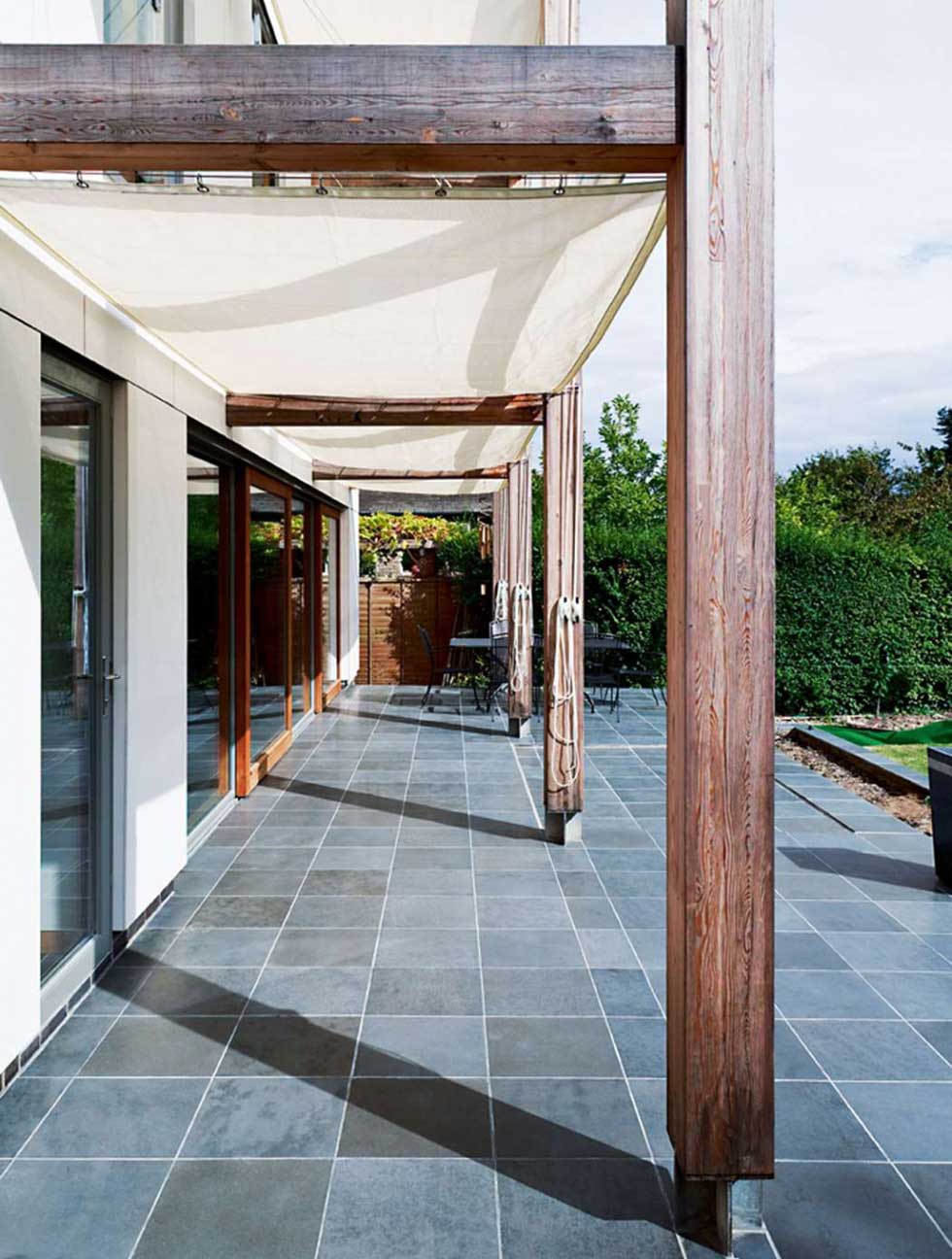 The other remarkable aspect is the house’s low energy consumption. It is massively insulated, using an unusual product called Foamglas® wrapped around the solid timber panels. Manufactured using a high proportion of recycled glass, it’s expensive but robust and unaffected by moisture.

Finally, large south-facing glazed walls at the rear of the house are protected from overheating by a series of removable sun blinds, or sails, which are put in place for the summer and removed during winter. The sails are retractable so they can be pulled in and out as required.