A Brick and Oak Self Build | Homebuilding & Renovating Skip to content Plenty of room to fit everybody in at Christmas was the most important factor when it came to the design of June and Geoff Gaffney’s new home, which features a magnificent oak frame from Oakwrights. “We were actually planning on downsizing initially,” says June, “but we needed to be sure that we could fit all 17 of us in, so the house just kept growing.”

In 2009, the couple were happily living in Ibstone in a traditional cottage when they saw an advertisement in a local magazine for oak frame houses. On a whim they decided to order the brochure and quickly fell for the impressive designs. They promptly started looking for a plot to build a new home on.

By chance, a large plot came up for sale just down the road from their existing house which offered unrestricted views over the local countryside and ample space to build on. “I had always wanted to build my own home and everything just seemed to fall into place,” says Geoff.

The couple put in an offer of £700,000 for the plot, which was duly accepted and then approached Oakwrights to design their new home. “There was a small 1950s chalet-style bungalow already in place which was demolished to make way for the new building. We wanted to really make the most of the views and the house’s positioning,” explains Geoff.

The design took around a year to perfect, as the couple honed their ideas and wishes for their new home. Initially the plans were for a more modest home, but after considering their large family, they chose to add two extra bedrooms and increase the footprint of the kitchen for entertaining. 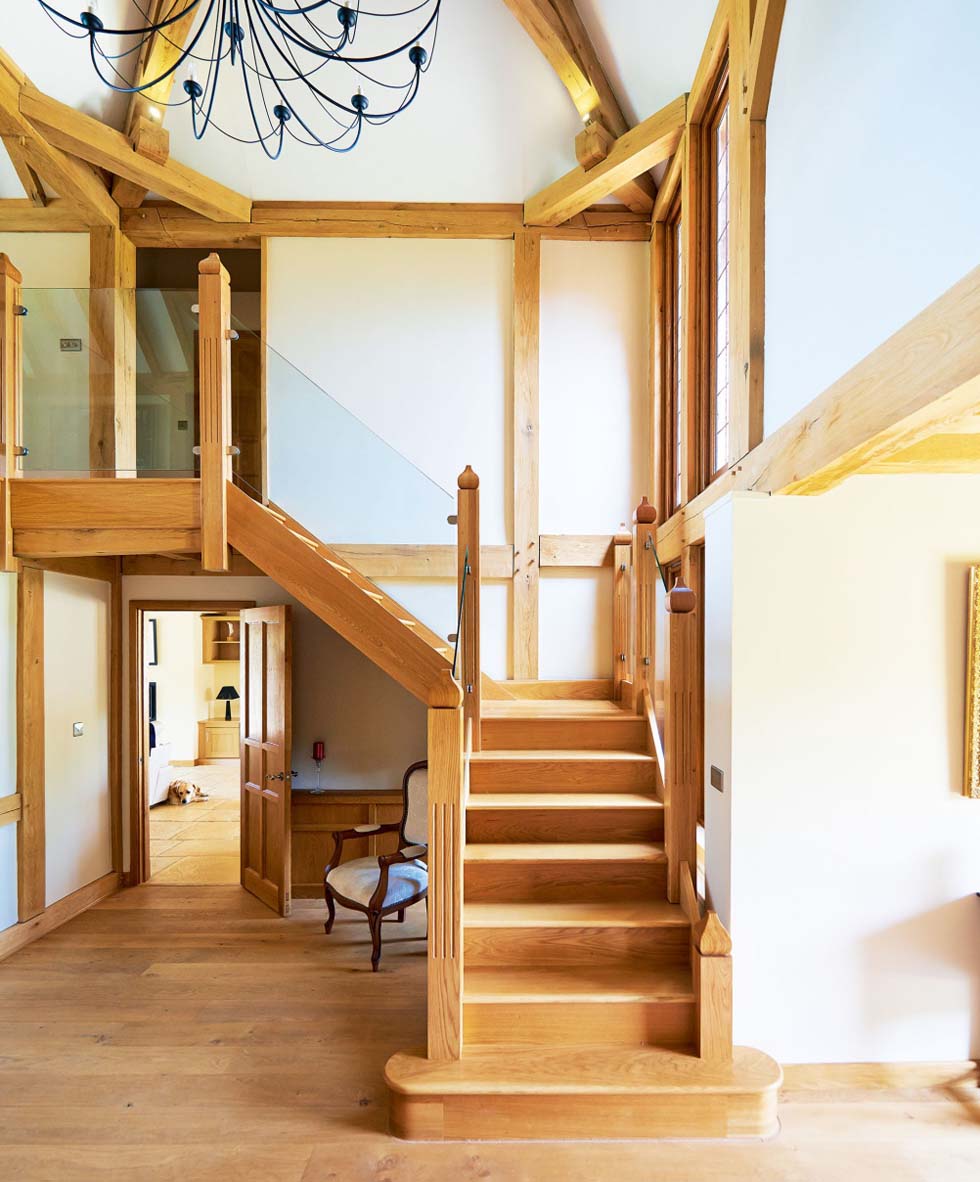 Happily admitting that they’re ‘beam people’, June and Geoff chose to expose the oak frame throughout the home, providing instant character and charm. Materials have been carefully chosen to complement the frame, including the oak staircase in the double-height entrance hall

Once the couple were happy with the design, the plans were submitted to the local planning department for approval, who, unfortunately had reservations over the design. “They said that the type of house we wanted to build didn’t blend in with the rest of the village,” says June. “However, we knew that there were plenty of other brick and oak houses, so we went round and physically counted them so that we could put a case forward to support our design. Part of the front of our house is also rendered, as well as the brick, which again caused issues.

“As a result, the house needed to be slightly repositioned within the plot to make the most of the natural light and warmth from the sun,” June continues. “We also had to install a ground-source heat pump (GSHP) as we weren’t allowed to use oil for heating. These weren’t problems as such; it’s just how houses have to be built now so that they’re more efficient. The GSHP has been brilliant though — really efficient and heats everything in the house well.”

Finally, the couple had to agree to install a bike stand to meet the local planning authority’s demands, which they complied with, and the plans were finally approved in 2011. “In the end we didn’t have to make too many compromises — we essentially got everything we wanted, it just took time to tweak the design,” June adds. 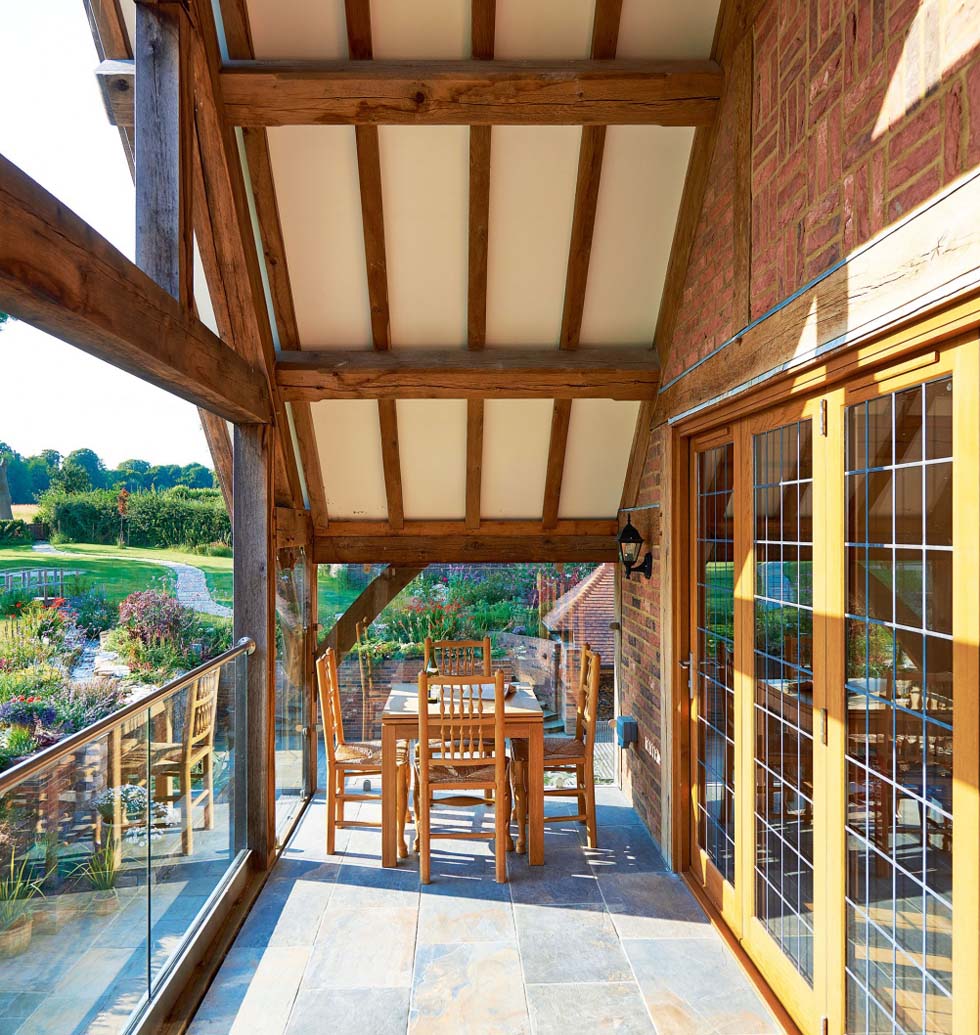 A dramatic oak frame balcony leading out from the upper sitting area to the rear offers a sheltered spot to enjoy the views of the countryside, with glazed panels providing uninterrupted views from both inside and out

As a result of a year-long planning process, building work didn’t start until February 2011. The builder began laying the foundations in April 2011 and once they were in, Oakwrights took over to erect the oak frame. “It was up within three weeks, which we were very impressed with,” says Geoff. “There was a planning issue with the very narrow lane to the site which we overcame by making the turning area big enough to turn an articulated lorry within the site. This meant no neighbour obstruction, and our neighbours were very accommodating during the build.”

Once the frame was erected, the couple and their chosen builders were left to finish the build. Unfortunately for Geoff and June, the construction company that they worked with to finish the house ran out of money towards the end of the build. “The house was quite well done but we were let down badly in other areas and I am still rectifying a lot of the finishing work since they failed to complete everything, especially the snagging work,” says Geoff. 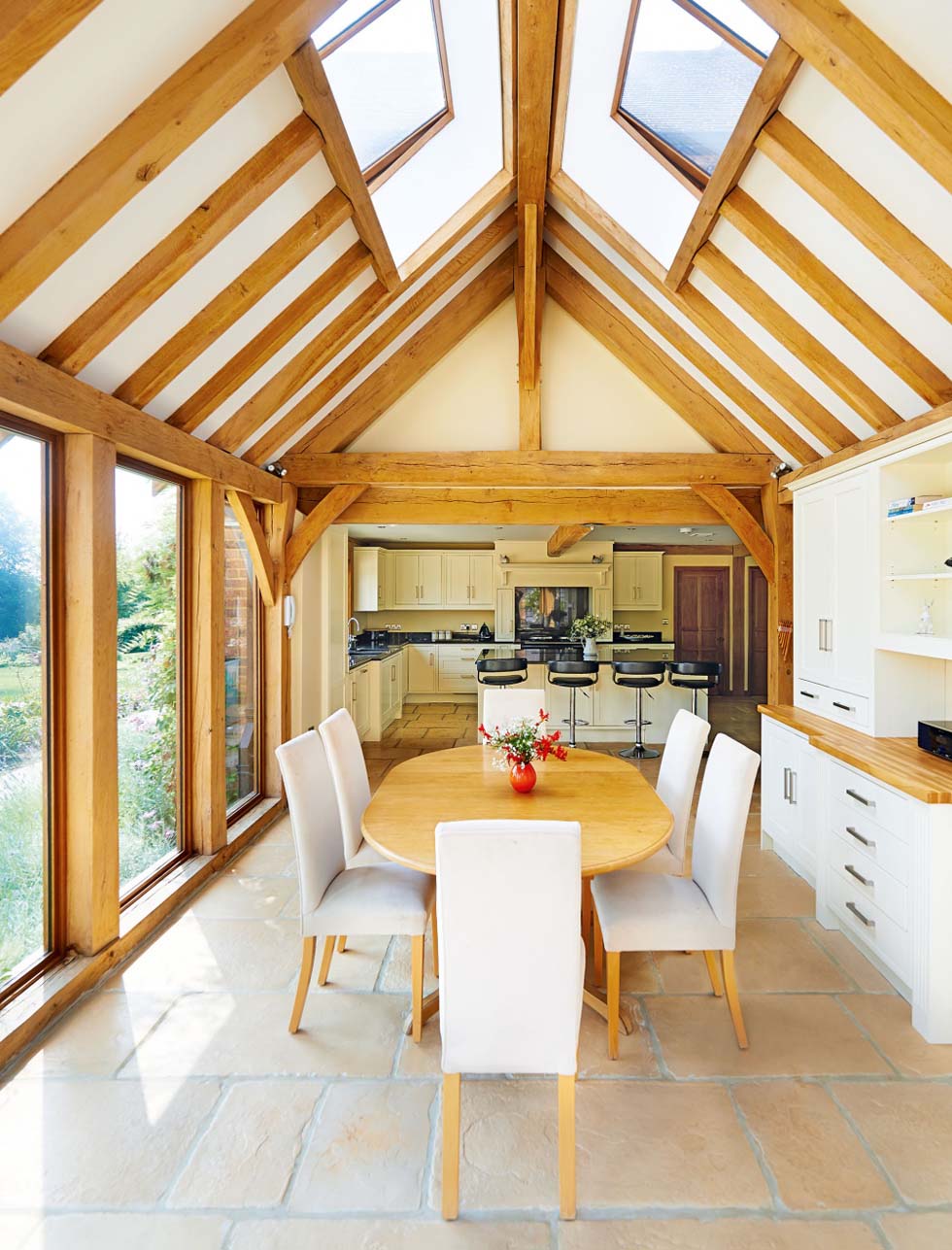 The single storey element of the dining space in the large open plan kitchen (from Anthony Mullan) allows for increased ceiling heights in this area of the home, creating a sense of space with a dramatic vaulted ceiling. Rooflights and full-height glazed panels between the frame have been added here to provide additional light

Perfectly fitting the couple’s brief to have a home to house their large family during the Christmas period, their new oak frame home boasts five spacious bedrooms. “We could have probably fitted another one in, but we preferred to have more space in each room, rather than feeling crammed in,” says June. There is also a comfortable sitting room off the galleried landing on the first floor, showcasing the beautiful exposed oak beams, with a large balcony that overlooks the surrounding countryside.

Downstairs, the kitchen/dining/sitting room space has been particularly successful, as June says: “The kitchen was important because everyone seems to gather in there. We also opted for a formal dining room, which can comfortably seat 20 people, so suits our family life well.” The informal dining space in the kitchen also sits within a single story section of the house and so benefits from rooflights and views out over the garden. 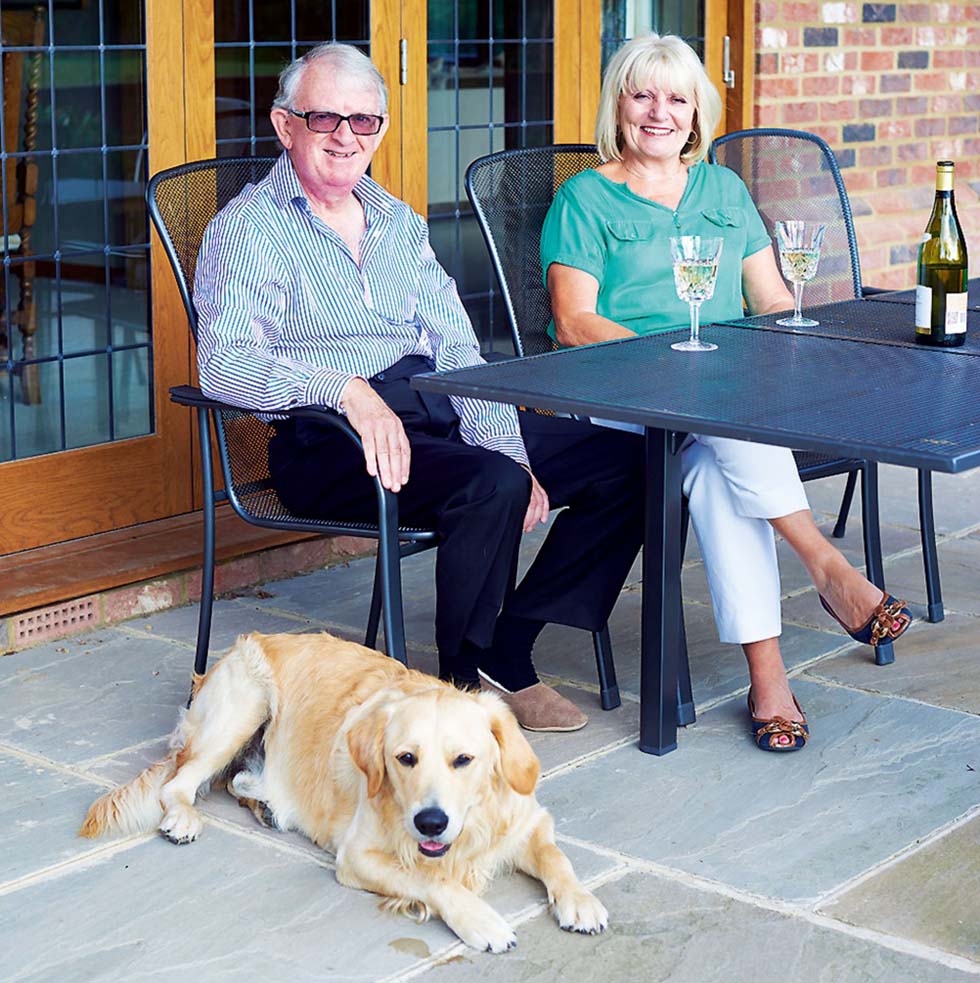 To further increase the sense of space throughout the house, a double-height atrium features a wrap-around staircase, complete with glass balustrade, which offers a grand entrance. The oak frame gives the whole house a warm and welcoming atmosphere and is perfectly in line with the look that the couple wanted to achieve. “One of our previous homes was a converted barn and our old house not far from here was a traditional cottage, so I think you’re either a beam person, or you’re not,” says June.

Contrary to the planners previous concerns over the new home fitting in with its surroundings, the Gaffney’s oak frame home on its rural one-acre plot looks perfectly at ease nestled among its more mature neighbours.

“We didn’t think we would ever build our own house,” admits June. “When the children were growing up, sometimes you have these dreams but don’t ever think you will be able to fulfil them. As we got older and circumstances changed, we just decided to go for it. If the plot hadn’t come up, we might never have done it, but everything just seemed to happen at the right time.”