For Michael Walker, the dream was always to move back to the place where he grew up, to a sleepy village in the heart of the Worcestershire countryside. But there was just one snag — finding a property that he could afford to buy was an issue.

After living close to Worcester city centre with his partner Katie, but increasingly desperate to escape to the country, Michael was inspired to build his own home after watching an episode of Build, Buy, Restore (presented by Homebuilding & Renovating’s Michael Holmes). “The couple on the program were in exactly the same situation as us: they wanted to live in the countryside but couldn’t afford to buy a house,” says Michael. “They even looked at a plot just up the road from ours.”

Fortunately for Michael, his parents still live in the family home where he and his siblings were raised — and that same house just happened to have a rather large back garden. “After many discussions, we were given the go-ahead to use part of the garden to build a new home,” he says.

“Ever since the idea of self building entered my mind, I knew that I wanted to build a timber frame house, which suited the traditional village setting,” continues Michael. Fortunately, his job as a graphic designer meant that he was able to sketch out a rudimental design, which he then took to Border Oak in Herefordshire, who specialise in green oak frame houses.

“The team were great,” says Michael, “they were really flexible and were happy to just make the house watertight, rather than do the whole build, which was important for us as we needed to be able to do a lot of the work ourselves in order to remain within budget.”

With the design finalised, it was submitted to the planning department and also needed to pass the local parish council’s strict guidelines. The house proved popular with all parties and work started on site in March 2012. 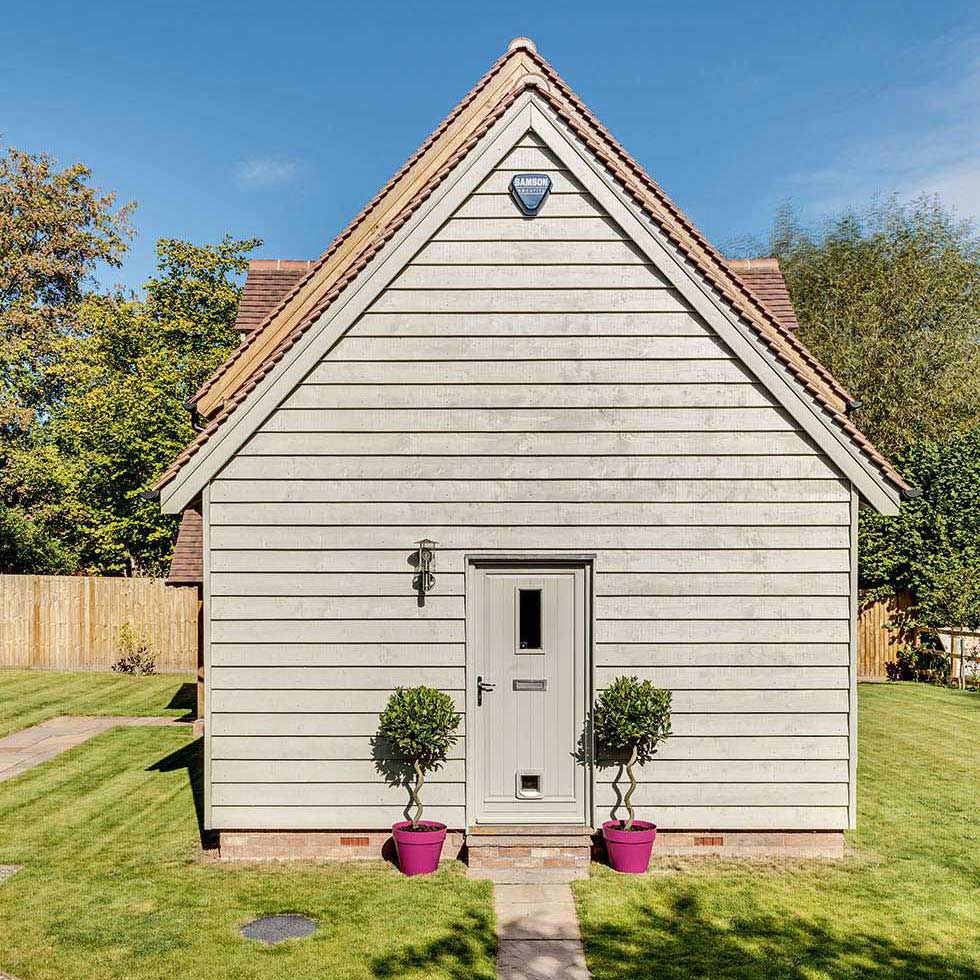 The oak frame home was designed and erected by Border Oak, with all external brick and timber cladding provided as part of the package. The new build is located in the garden of Michael’s parents’ house and Michael left his job to manage the final elements of the project

Importance of a Contingency Fund
As soon as the couple hit ground, they hit an unexpected expense — the builders realised that the footings needed to be dug down a metre further than planned. The added time and resources hadn’t been accounted for in the original budget and quickly ate into Michael and Katie’s precious contingency fund.

“The major piece of advice I would offer to anyone is to be sure that you have a good contingency in place before you build. We had already set some money aside and that wasn’t enough, as so much money went into the ground before the first brick had even been laid,” advises Michael. “Luckily we were able to borrow a bit extra, but you really do need a buffer.

“Another area that cost more than expected was the driveway and lowering the pavement. As we had to use the council’s contractors, we couldn’t get lots of quotes so it ended up costing us around £4,000 all-in-all — far higher than we had anticipated, but it had to be done. Coupled with the extra money needed for the footings at the start of the build, if we hadn’t had some spare money, we wouldn’t have been able to finish everything to the standard that we have.”

Once the footings were in place, Border Oak erected the oak frame and completed all of the external work, installing SIPs (structural insulated panels) and then exterior cladding around the frame, and adding the roof. From this point it was up to the Walkers to push the build along. Michael acted as project manager, taking on the task of booking the various contractors needed to install services on site and to plan and organise the first and second fix work.

He also set himself the somewhat arduous job of sanding and then acid treating the oak. “Getting the frame finished was the longest process of the build. Every section needed to be sanded, treated and stained, which felt like it took forever. By the end of it I had gone through four electric sanders because they just kept burning out.” It was all worth it though — Michael believes that by doing so much of the work himself, around £50,000 was shaved off the total build cost.

“Ensuring the wood’s colour continuity became a real labour of love for Michael, too. The engineered oak flooring and oak kitchen worktops were specified untreated so that they could be stained to match the frame. “I know it sounds obsessive, but I wanted everything to be perfectly finished. Building your own home is a once-in-a-lifetime opportunity, so it had to be right.”

Working to Budget
“I actually made the decision to leave my job for the last six months of the build. This was because it meant that I could do more work on the house, saving on labour costs,” he says. “At one point our budget was starting to dwindle and we wanted to make sure we could finish the build to the level that we wanted. It did take over our lives though — we were on site every night and weekend, but it was definitely worth it in the end.” 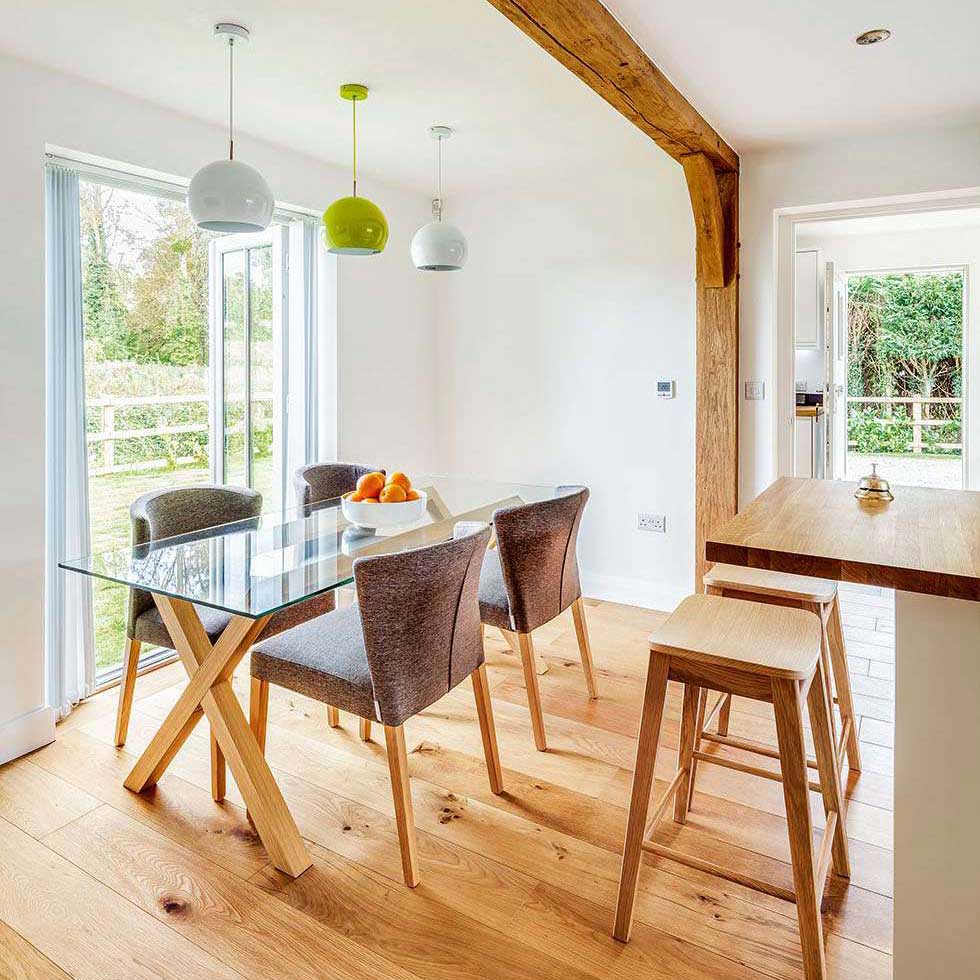 Michael specified the flooring and worktops unfinished then applied the same matt finish Osmo Polyx oil used for the interior oak frame — this gives continuity to all the timber. (Teak oil was used for the exterior oak)

The couple tweaked the original design during the build. Instead of a window in the kitchen, they opened the space up with French doors, making the most of the stunning countryside scenery beyond. “The kitchen is probably my favourite room,” says Katie. “We always end up gathering around the island to chat when friends come over and we’re so pleased that we chose the French doors.”

After visiting another oak frame home nearby, Katie also made the rather expensive decision to take the master bedroom ceiling right up to the rafters, exposing the beautiful frame. This involved adding extra insulation between the rafters and preparing and finishing the exposed oak frame, but the vaulted ceiling turned out to be a good decision — the room is now light and airy, with the additional height giving the illusion of extra space.

Underfloor Heating
Another space-saving solution was installing underfloor heating throughout the property — doing away with the need for wall-cluttering radiators. With the whole village off-mains gas, Michael and Katie opted for an air-source heat pump, which powers the underfloor heating system throughout. There is also a woodburning stove in the living room that is so effective it warms the whole house.

All of the space in the house has been meticulously planned out, with each room providing a comfortable living space for the couple. A large utility room just off the kitchen houses all of the necessary appliances, as well as a walk-in shower room – ideal for when guests come to stay – and a further entrance. This room sits within the weatherboarded section of the build; it appears to be an ‘extension’, as if the cottage has evolved and been added to over time.

Not one to rest on his laurels, Michael has been firmly bitten by the building bug and has set his sights on adding a garage next to the house. “I loved building the house, so I’m excited to make a start on the garage. We’re also in the process of submitting the plans for a conservatory, which will give us even more space,” he says.

“We don’t plan on moving any time soon, but if we did we would certainly consider building again. It’s all about having the confidence to self-build in the first place, but we would recommend it to anyone.”