It can often be a great challenge for renovators looking to undertake an extension and remodel of a period property, however for architect Nils Feldmann and his wife Lisa, their two-year project to bring a Victorian villa into the 21st century has been a triumph — so much so that their builder won an FMB (Federation of Master Builders) Award, as well as Nils winning two RIBA Awards.

The couple purchased the house in August 2012 and knew immediately that they wanted to turn the property back into a family home. The original 1879 house had been split in two in 1924 with the old staircase closed off and then the upstairs flat turned into bedsits in the seventies, accessed via an external staircase.

“We could see that the plot had land and that the house could be extended to the side and rear. Having done two small refurbishments previously this wasn’t daunting for us. We saw it as an opportunity where others might have been afraid.”

“I drew up eight or nine different plans as we wanted to work out exactly how we wanted to live in the house and get the orientation of the rooms just right,” says Nils. “I made a model almost like a dolls house, which you can take apart to see the layout on each floor, to take to the structural engineers, planners, and even show the children so they could see how the house would look — it got them excited as they could choose their bedrooms. The model also allowed us to test where the glazing should be.”

The final proposal was a complete remodel with the addition of two modern extensions and a new second storey in the voluminous loft space — along with knocking through to reveal the original staircase which had been hidden behind cupboards for 90 years. 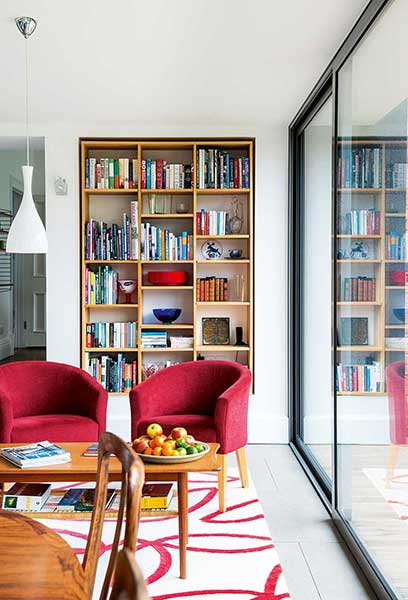 Work began on site in April 2013 with the couple living in their previous home while the work was undertaken. They were keen to use local suppliers where possible and reuse as many materials as possible.

A modern construction system was used for the floor in the new extensions. The extensions are built in timber; there was no steel involved which made it easy. Recycled newspaper was then blown into the ceiling of both extensions and the walls and floors feature heavy doses of Knauf insulation. Underfloor heating provides comfort underfoot in the new additions too.

To the front of the property the Victorian brickwork remains, with compressed Rockwool insulation veneered in a red cherry creating the effect of door panels on the faux garage. The rear meanwhile has been clad in insulation and then white render, with the two new additions clad in grey render to signify old and new. A bargeboard was then added to the Victorian pitched roof to add prominence, and a green sedum roof introduced on the extensions.

While carrying out work to the first floor, the couple were reluctant to keep the bedroom ceiling heights as high as those on the ground floor and chose to lower the ceilings to make way for a new floor above. “We had envisaged keeping the existing roof structure but we asked James whether there was anything he would do differently and he suggested taking the roof off. All of the roof tiles were removed and a new roof was added which allowed for the attic space to be increased.” 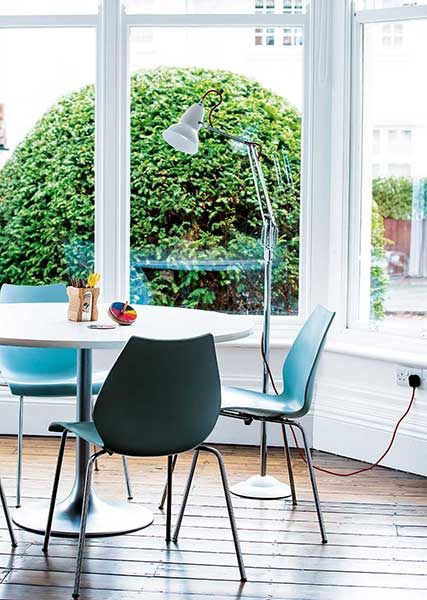 Nils and Lisa took great care to ensure they saved any period features they could, including the original ornate ceiling rose in the front living room. The original six-panel doors and ironmongery were also kept. The couple were fortunate to find a local craftsman with experience of period properties who was able to replace the cornicing which was crumbling, too.

A real feature of the home, the original staircase has been carefully restored. The windows were also changed throughout after the original timber windows had been removed over the years and replaced with PVCu. Now, double-glazed timber units replicate the originals, including the bay window in the formal lounge where PVCu French doors used to open out to the garden. 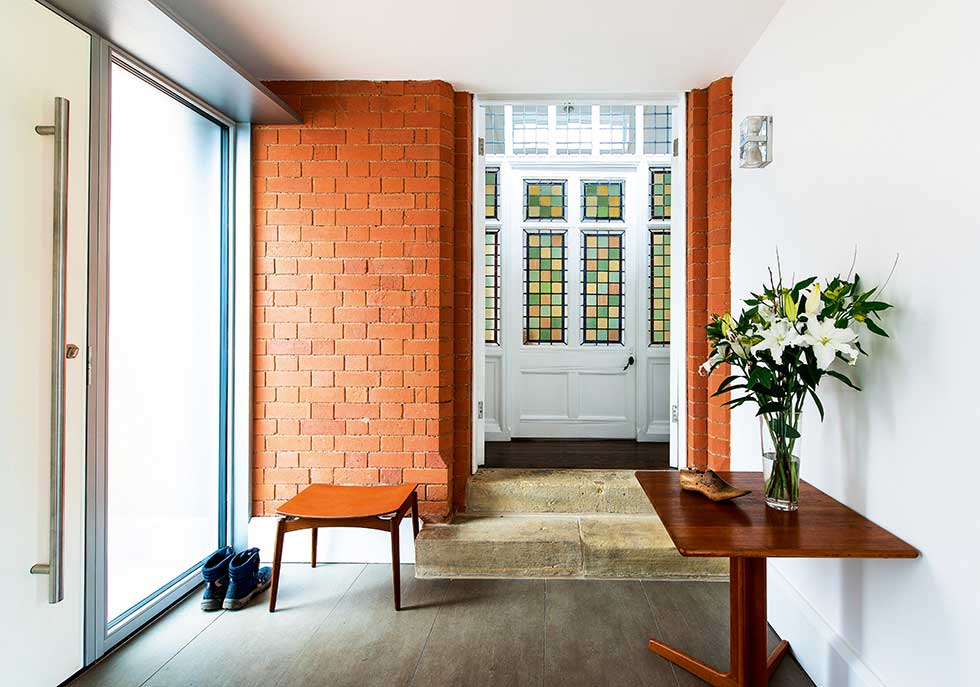 The entrance has also been moved to the new extension, with the original Victorian stained glass door still in tact on the left as you enter

In the rear kitchen extension, oversized sliding doors were chosen over bi-folds due to their larger openings and as the couple didn’t want many frames. Nils and Lisa did however look carefully to find a company who could supply the large 7.5x2m doors with minimal profiles — these are from Sunflex 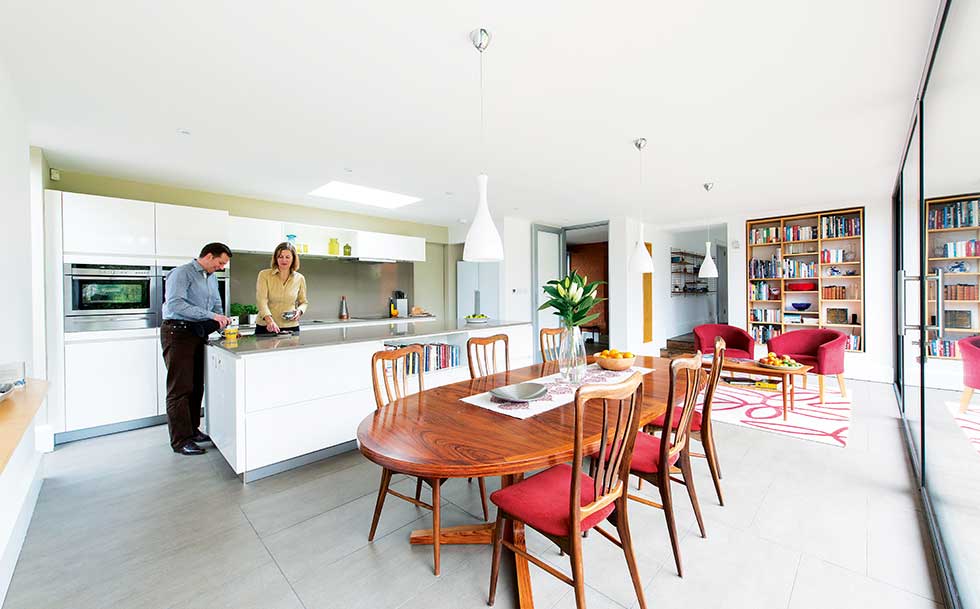 Situated in the new section of the home, the large open plan kitchen diner is a great entertaining space, with large sliding doors opening on to the terrace. The worktop, a composite quartz mixture, is from Samsung Radianz Quartz 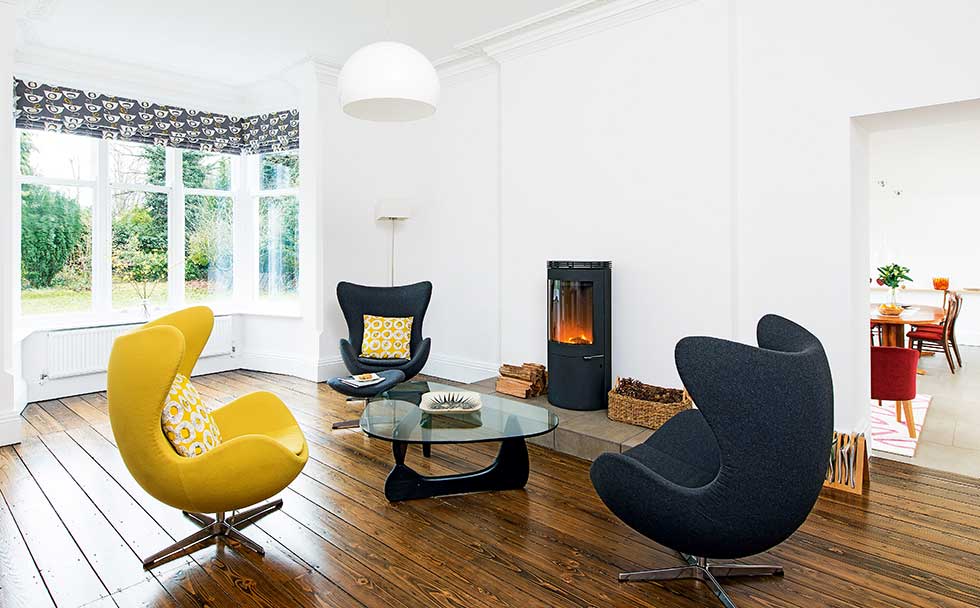 A Westfire Uniq woodburning stove makes for a great focal point in the formal living room in the Victorian part of the house; this space also features the original floorboards. PVCu French doors were removed here and the bay window reinstated to offer a pleasant outlook over the garden 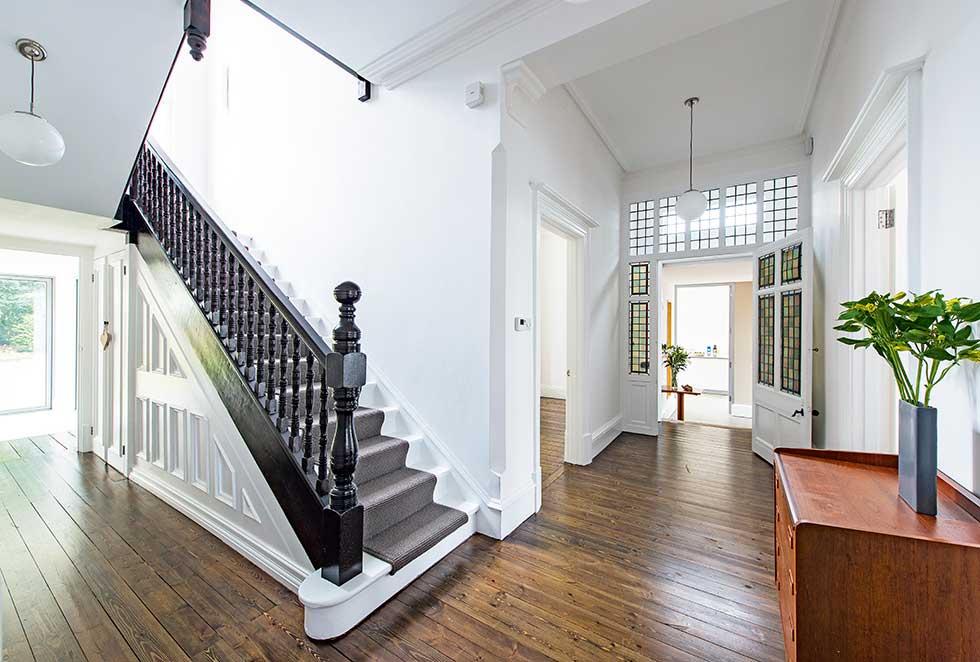 After 90 years hidden behind cupboards, the couple broke through to reveal the stunning original staircase and employed a craftsman to replicate the spindles and balustrade where the top of the staircase had been ripped away in the past. The whole staircase was then varnished, and is now a real centrepiece of the home 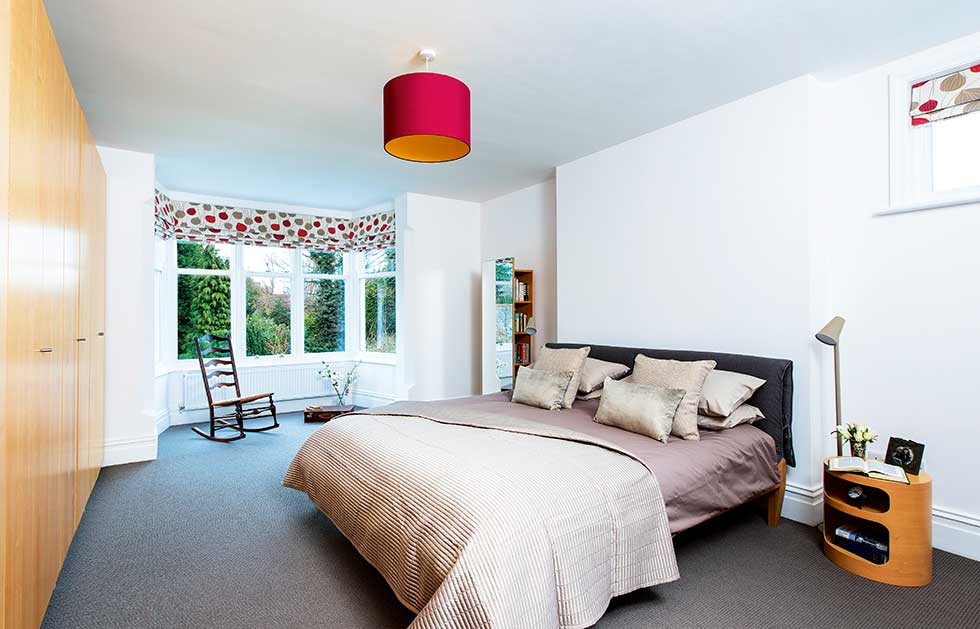 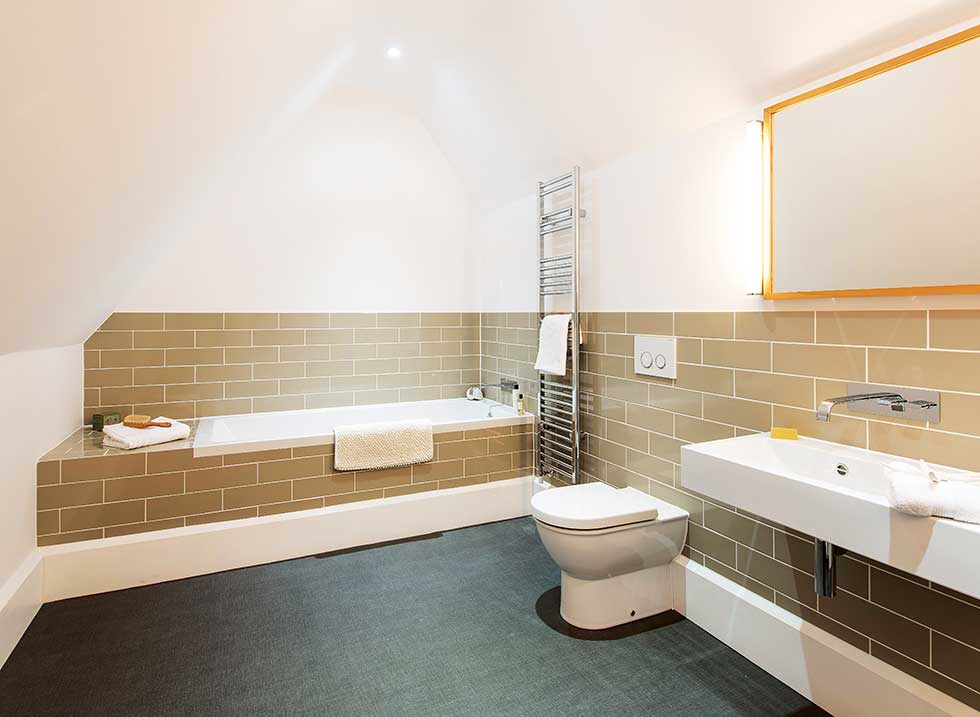 The new bathroom features taps from Crosswater, and the wall-mounted basin is supplied by Alape 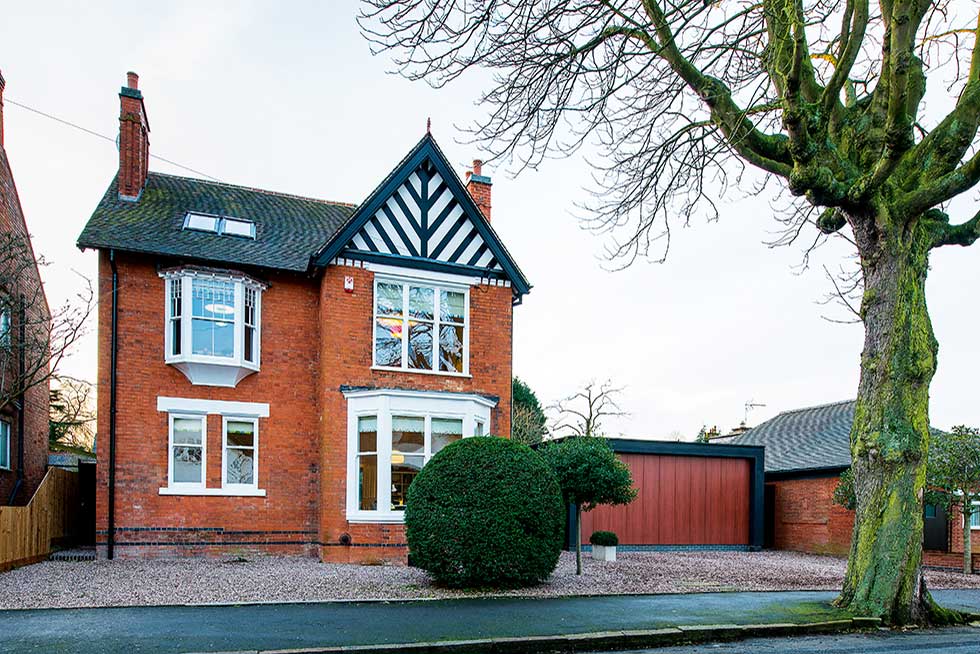 To the front of the property, the Victorian brickwork remains, however a faux garage to the side hides the new extension. “The front of the house is made to look like there is a garage attached to the side, but if you look closely you’ll see there’s a plinth in front — behind here is actually the bicycle store and pantry which leads into the kitchen,” says Nils