Having lived in a new house on a development for many years, Ian and Mary Cartwright had a long-held dream of building their own oak frame home in the countryside.

“It was something we had always wanted to do, but it wasn’t until our two daughters, Jodie and Laura, both of whom are now in their twenties, had left home that we began to look for land as we no longer had the constraints of schools,” explains Ian.

The couple spotted a plot for sale on the border between Herefordshire and Worcestershire, with views of the Malvern Hills, with a local estate agent and, keen to move to a more rural area, they snapped it up.

“The plot was part of the garden of the neighbouring house,” explains Ian. “They were selling off a third of an acre of the land, which was once an orchard. It was sloping and completely overgrown — some of the trees were 50 feet high so there was a lot of clearance work.”

Fortunately, none of the trees had tree protection orders on them, but the plot is located in a conservation area so planning permission was needed to remove them. 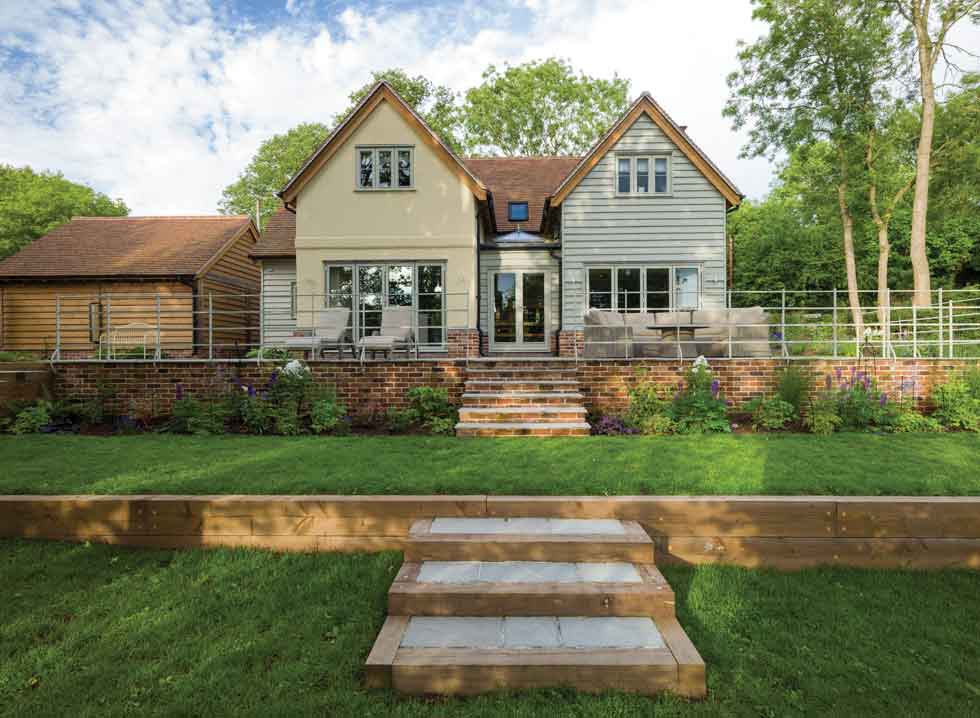 The site slopes away to the rear and so extensive excavation work was carried out, moving tonnes of soil from the front to the back before terraces were created. Two large gables sit at either end of a flat-roofed section which features a roof lantern

The idyllic plot slopes away from the road, meaning some extensive excavation work was required in order to level the site out.

“The land at the front of the plot was two metres higher than at the rear at its steepest point,” explains Ian. “We relocated tens of tonnes of soil to the rear of the plot, and created a series of terraces.”

Ian and Mary hired a professional landscaping company to design and implement the work, while Border Oak project managed the build. 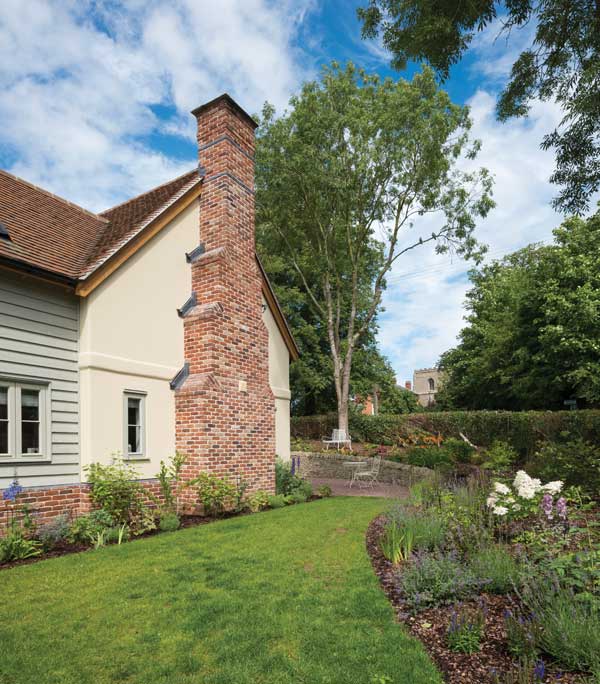 A combination of render, painted timber cladding and brick break up the exterior design and provide visual interest

Traditional Design with a Twist

Having successfully purchased the plot, Ian and Mary went to Border Oak and asked them to come up with a design for a slightly bigger house, before resubmitting plans, which were quickly passed.

“We also asked for a more modern, open-plan layout to that on the original plans,” says Ian. “The plans had been for a four bedroom house but we decided that three larger bedrooms, with two bathrooms on the first floor suited our needs better.” 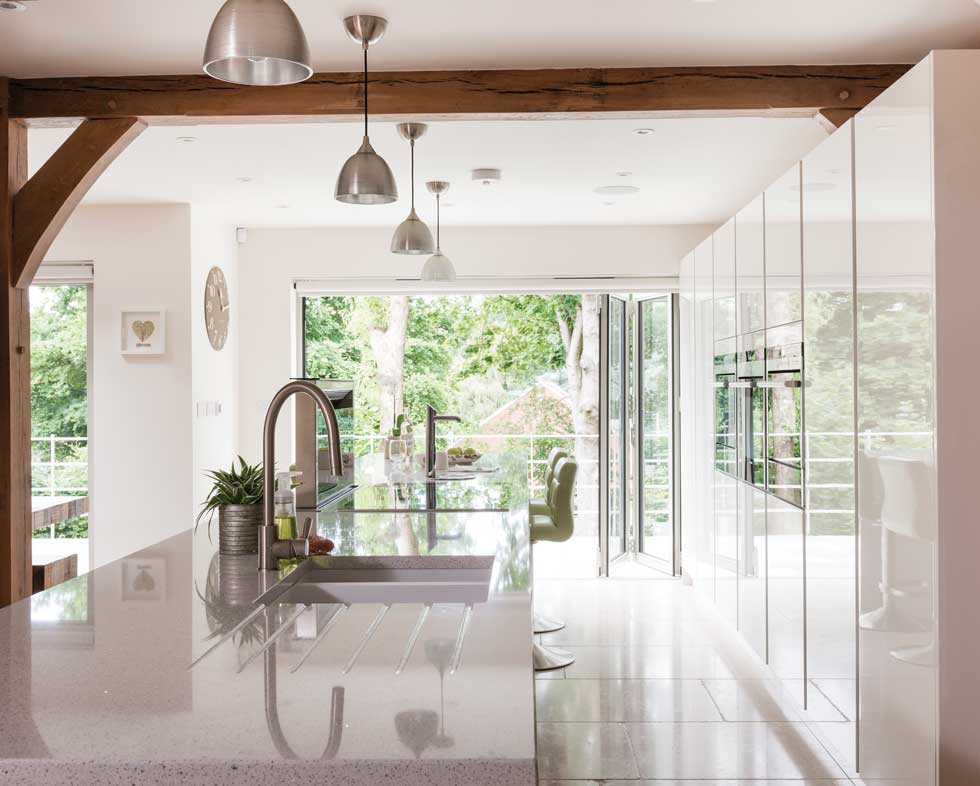 A contemporary, minimalist kitchen was high on the wishlist, so Ian and Mary chose full-height units in Pergamon gloss and worktops on Silestone composite quartz, both supplied by Classic Interiors

The new house has a classic appearance externally, with dormer windows, through-coloured render, a dwarf brick wall, timber windows and painted timber cladding. It is a surprise, therefore, on walking through the front door, to be greeted by sleek, contemporary interiors.

“The first thing we did before building work began was to organise the design and supplier of the new kitchen and then designed the house around this,” says Ian. “We didn’t want dividing walls between any of the ground floor living spaces,” he continues. “It was important that everything was open and minimal — the staircase, for example, features lots of glass so that we can look right through from the entrance hall and out into the garden.”

Stone flooring, a combination of bifold and French doors, strategically placed rooflights and a complete lack of visible wiring or appliances all mean that Ian and Mary’s wish for pared-back interiors have been accomplished. 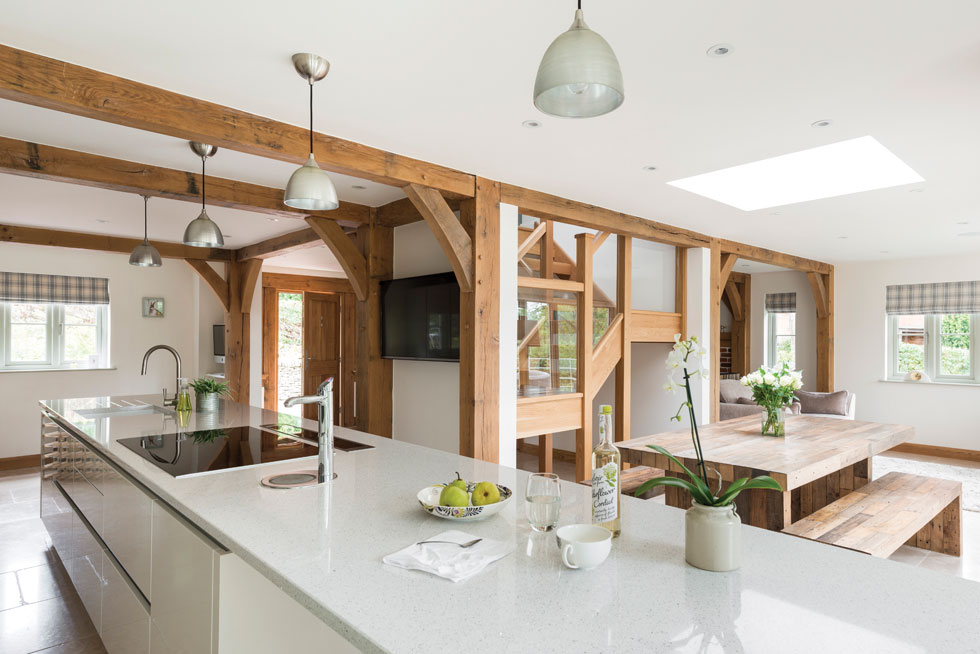 Ian and Mary wanted to be able to stand in the kitchen and see right through the house. The island houses the induction hob, hob and boiling water tap, so whoever is working in the kitchen need never have their back to the action

The light-touch of the scheme also means that the warmth of the oak frame can be fully appreciated — and small LED lights recessed into the floor at the base of every vertical oak post mean that as the natural light fades, the character of the timber can still be admired.

Ian and Mary rented a house for 20 months while the planning and building work took place, having set down several ‘golden rules’ before the build. “One of the rules was no living in a caravan!” says Ian. “Another was not to rush anything in order to meet a ‘target date’, such as Christmas. We didn’t want to take shortcuts to get things done — Christmas comes and goes and you may be left with a rushed job.” 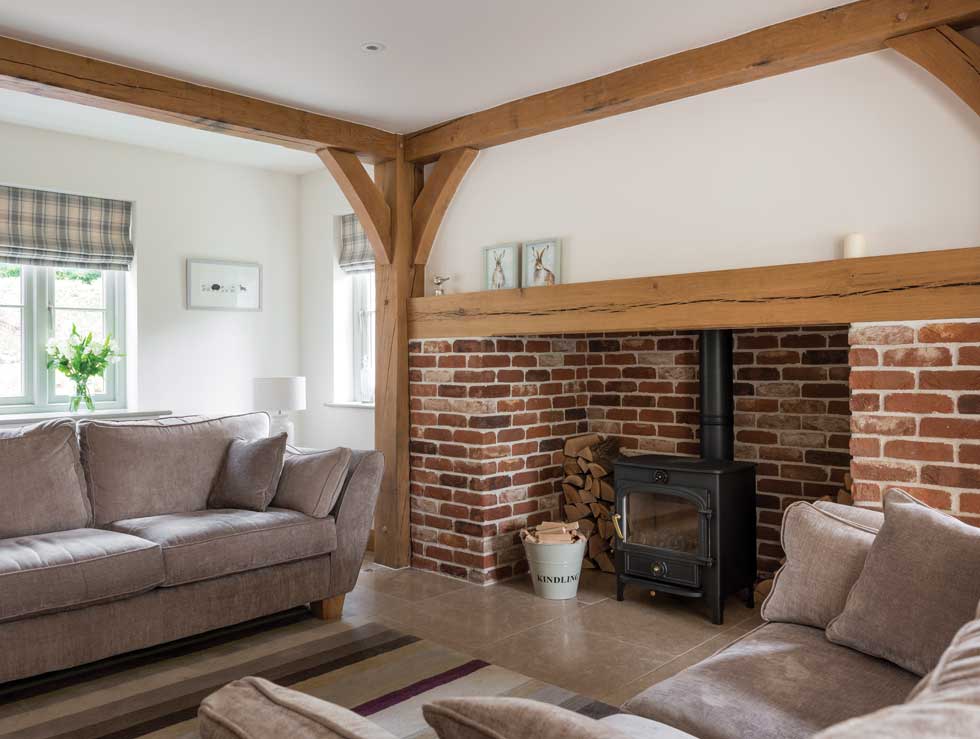 Knowing that they were building their dream home, Ian and Mary were happy to pay a little more for those items that they could not foresee themselves changing. “The kitchen, underfloor heating throughout, stone and oak floors — they were all worth it,” says Ian. “We didn’t build this house to make money, this was our long-term dream.”

Even with the meticulous planning and research that the Cartwrights put into the build, they were still surprised and, at times, overwhelmed by the number of decisions they were faced with. 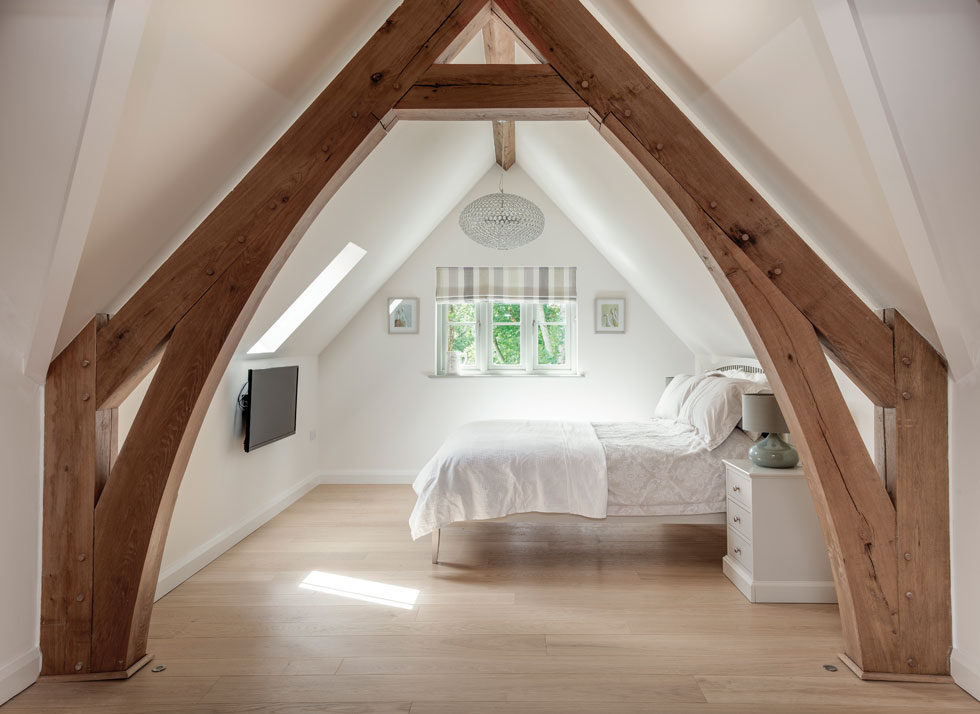 On the first floor are three bedrooms, packed with character thanks to the exposed oak frame and oak flooring. Rooflights bring in extra natural light while maintaining a sense of privacy

“There is just so much choice — where do you start?” says Ian. “And you have to make decisions early on — right down to which way kitchen unit doors will open and where the television will be. You are continually trying to imagine what it will be like to live in — thankfully it is exactly how we wanted it.

“Our final golden rule was not to move into the house until it was totally finished,” says Ian. “We wanted to walk in and for it to be absolutely perfect — and that is what we did.”