“We wanted to build a home to our very own design and specification without compromise. We wanted a contemporary but unfussy design with lots of glass, inside/outside living, an open plan living area and a garage underneath. The house had to be low energy with the plumbing all located in the same quarter of the house to reduce pipe runs.

“On this project we didn’t use an architect, a quantity surveyor or a project manager,” says Richard. Instead Chrissie and Richard spent endless hours planning and designing their dream home on a fairly simple piece of home design software, using magazines and the internet to guide their schemes. They used the company Potton, who turned their drawings into working constructional drawings and planning submissions, alongside designing and erecting the kit home.

Plots on the island are sparse and when an opportunity came up, Richard and Chrissie had to move fast.

“It was around a third of an acre, heavily wooded and sloping — it was effectively the bottom of the garden of a house up the hill,” explains Chrissie. “We could see it would have great views, and decided to go for it.”

Given the location, which is in close proximity to local areas of historical interest, their offer was made subject to the satisfactory outcome of a geophysical survey, assessing the site too for any archeological interest which would have put the kibosh on any development. When this was received, the couple went ahead and acquired the plot, which came with outline planning permission.

The contemporary scheme, which Richard had informally ran past a planning officer before submitting, was approved without trouble.

With the exception of some of the groundworks, the basement formwork, some steelwork and all of the timber frame, he and Chrissie effectively built the home themselves over a period of four years — two of which he fitted in around his work, two of which were full-time upon his retirement. To call this a self build barely does it justice.

To name but a few of their achievements, between them they handled the blockwork, all the plumbing and electrics, drainage, bathroom and kitchen fitting, installation of the western red cedar cladding, the finishes, all the landscaping and much else besides. Richard also removed 200 tonnes of the 1,200 tonnes dug out of the site by wheelbarrow, fed by a digger bought for £5,000.

“We went for Potton’s closed panel timber frame system, maxing out the Kingspan insulation to 120mm (achieving U values of 0.15 in the process),” says Richard.

The basement is built out of concrete formwork, with steel beams cantilevering out to provide support for the deck. The timber frame sits off the basement walls.

Triple-glazed windows from Internorm provide excellent performance throughout (U values of around 0.8 compared to typical double glazing of 1.6) as well as pleasing looks — large areas of glazing with minimal frames and lovely large sliding doors.

The heating system consists of an Earth Save 4kW heat pump powering underfloor heating with a MVHR (mechanical ventilation heat recovery) system from Genvex managing ventilation as well as using heat generated in the kitchen and bathrooms to help heat the rest of the home. With a woodburning stove providing bags of heat for the open plan ground floor space, Richard and Chrissie have had the underfloor heating on a grand total of once over the 15 months they have lived in the house.

In many ways the key issue is controlling overheating, which they have accounted for in the design (covered outdoor spaces minimising direct sunlight) and specification (the Internorm windows are coated to reduce solar gain — the triple glazing helps in this regard too). Meanwhile, 15 photovoltaic (PV) panels hidden behind a parapet on the flat roof (single-ply membrane) provide a significant contribution to the bills. LED lights throughout minimise energy use too. 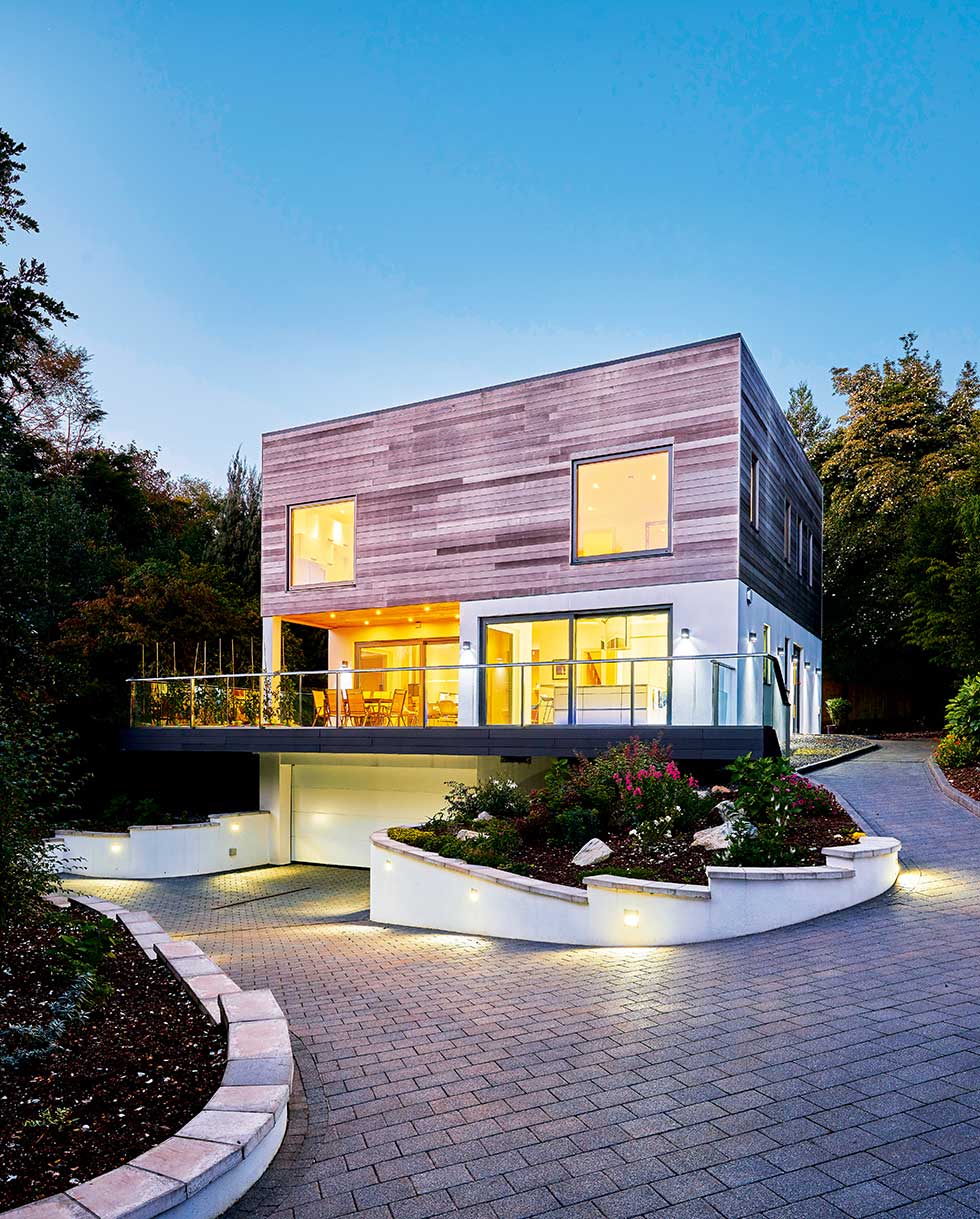 The new home successfully navigates the challenges of a sloping site, with a formwork basement holding cantilevered steels which support the overhanging deck and Potton timber frame 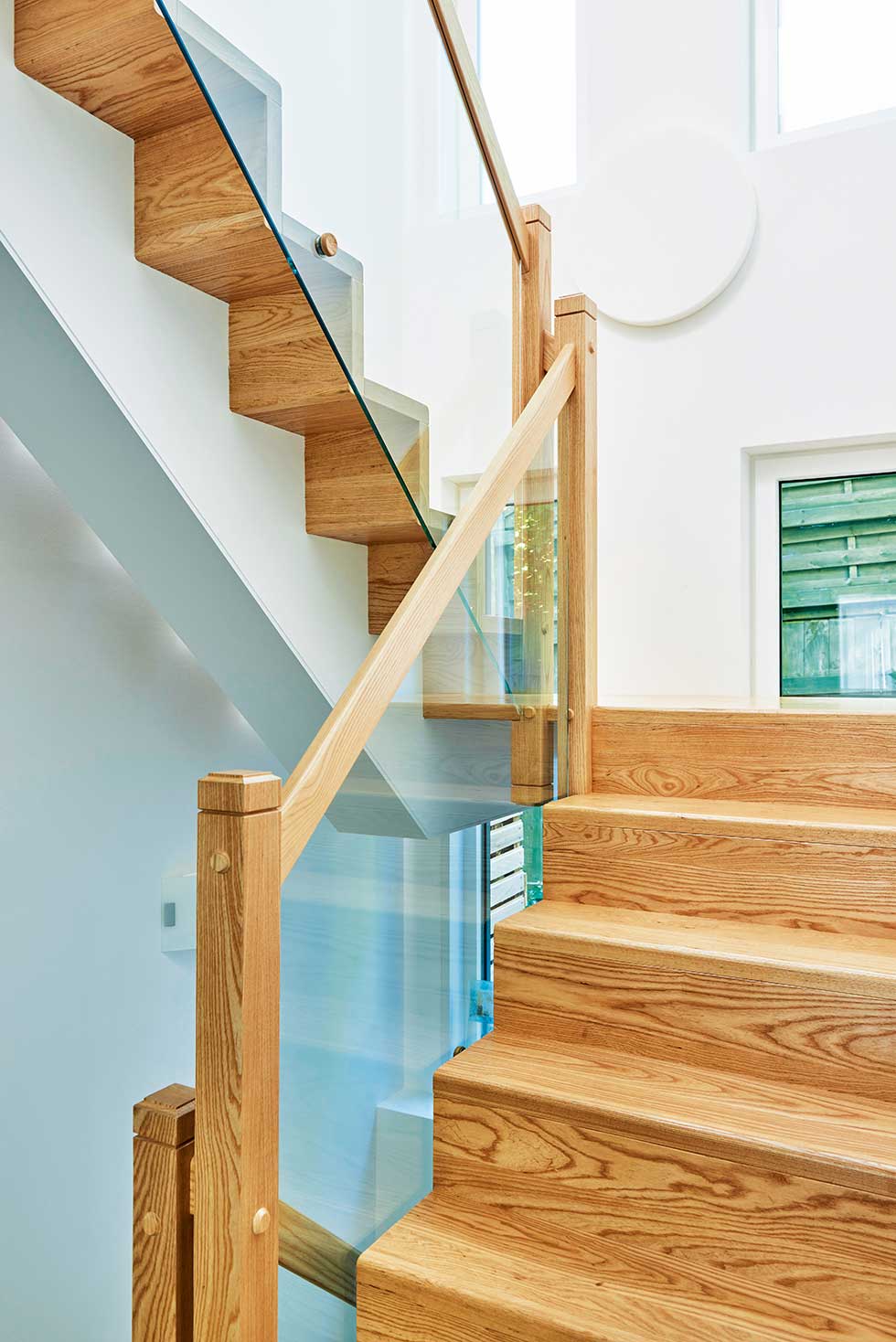 The bespoke staircase runs off a central timber beam spine 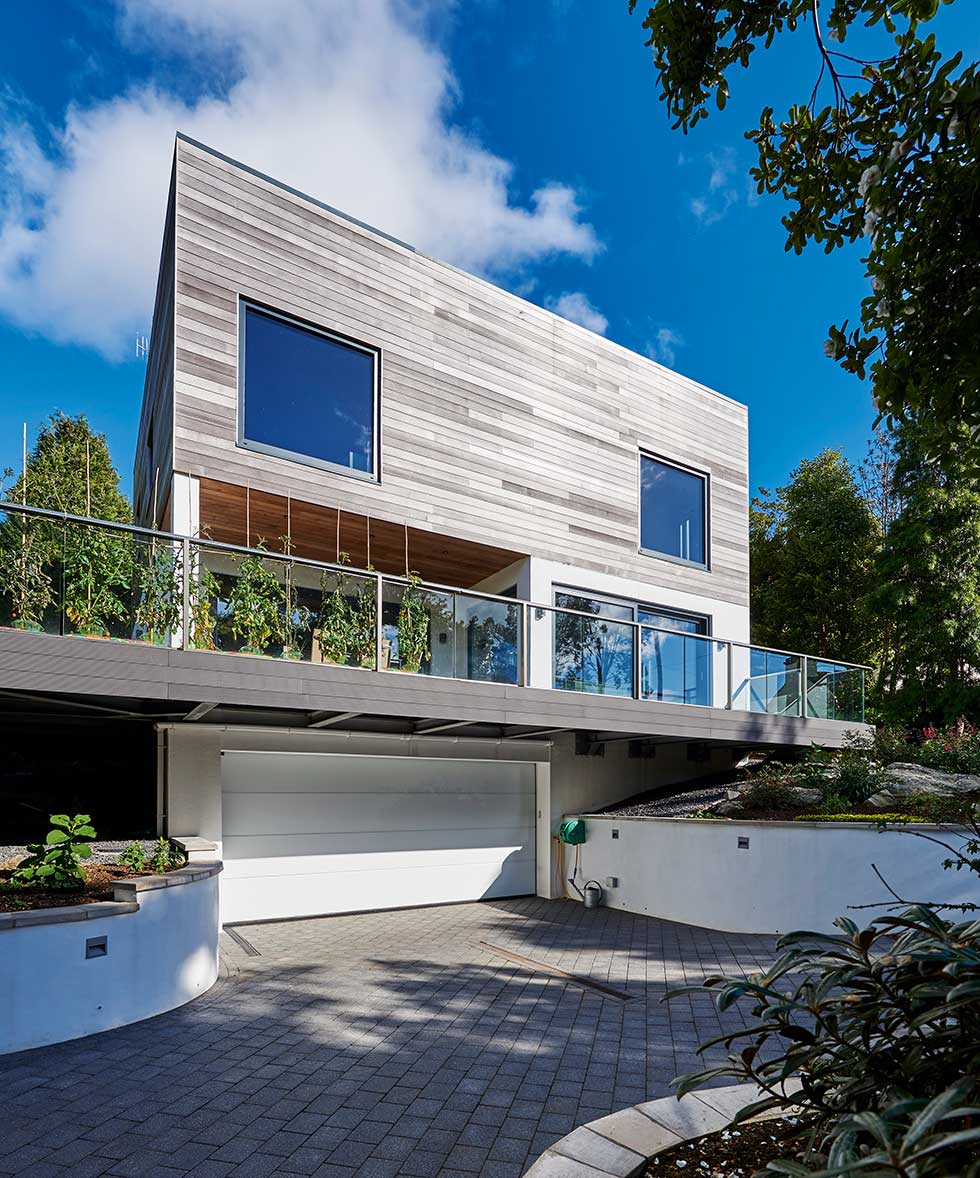 The cedar cladding was fitted by Richard 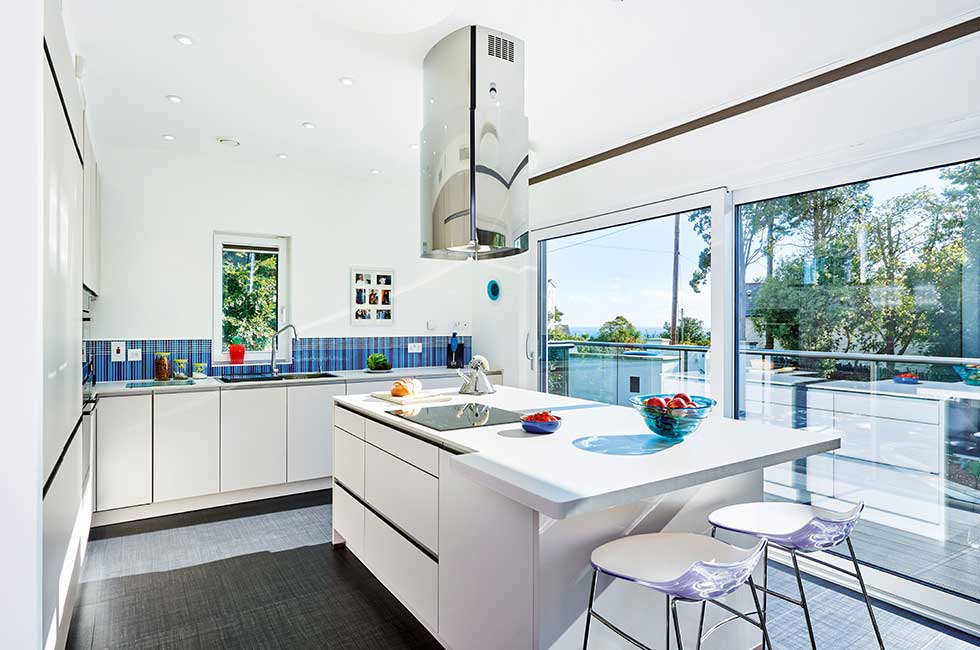 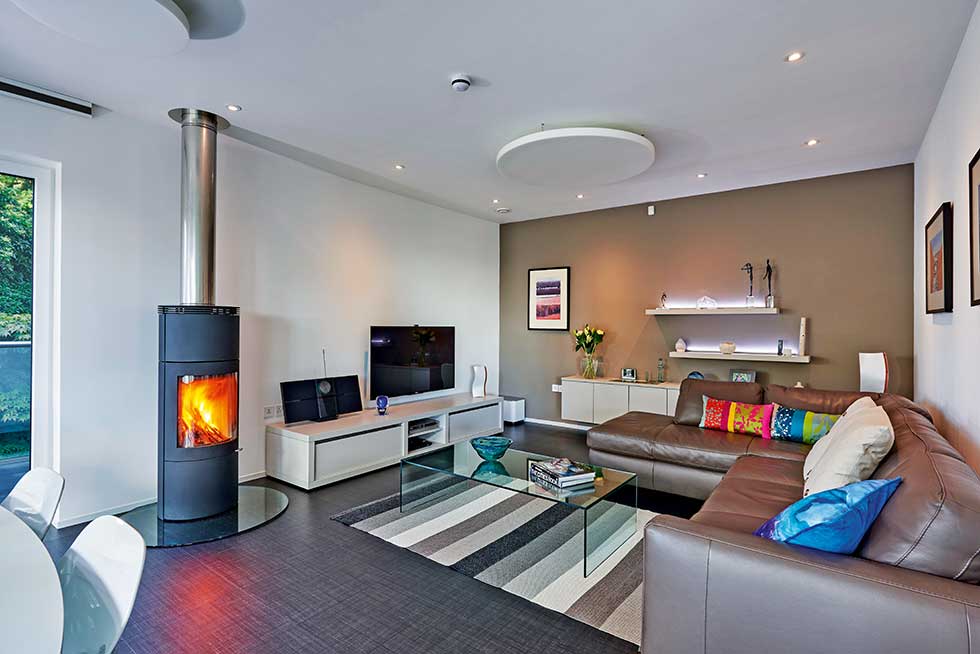 The large circular features are in fact acoustic baffles (they used the Halo model from Sonata Acoustics), specified to address potential sound problems with high ceilings – which are 2.9m high here – lots of glass and hard floors. A woodburning stove, from Stoves Online, is hardly used thanks to the building’s airtight, insulated envelope and mechanical ventilation heat recovery unit 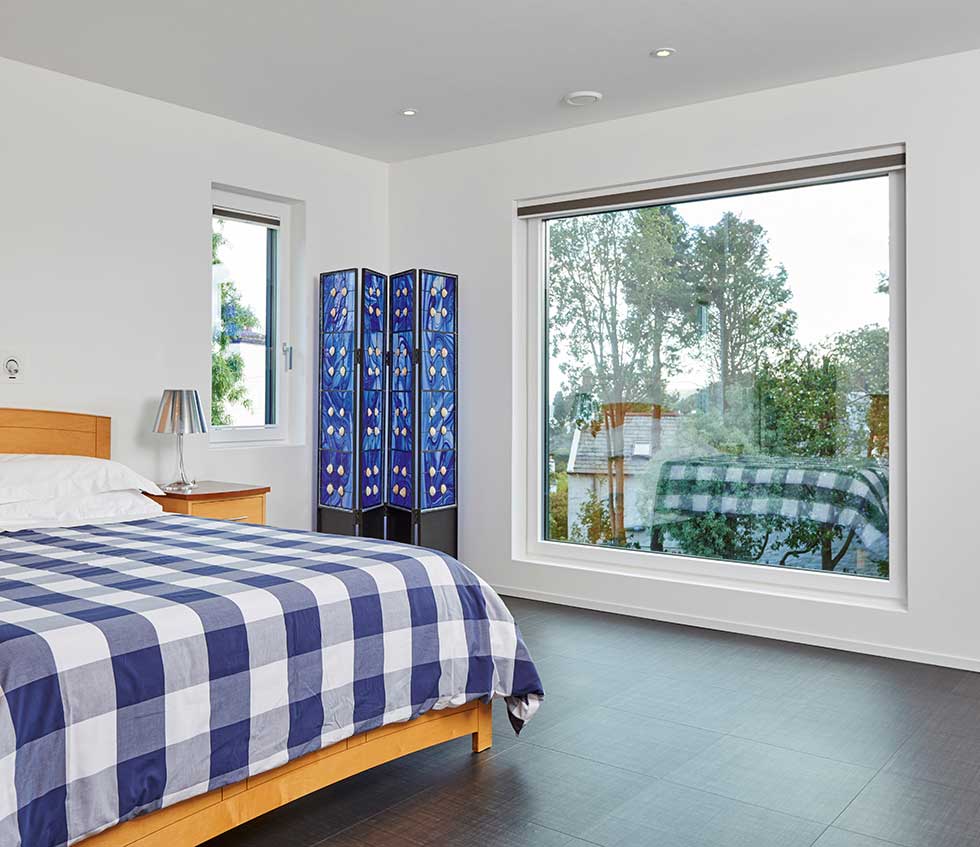 As self builders Richard and Chrissie aren’t slaves to the vagaries of building to the market, so have designed in fewer, but bigger bedrooms, all with large picture windows 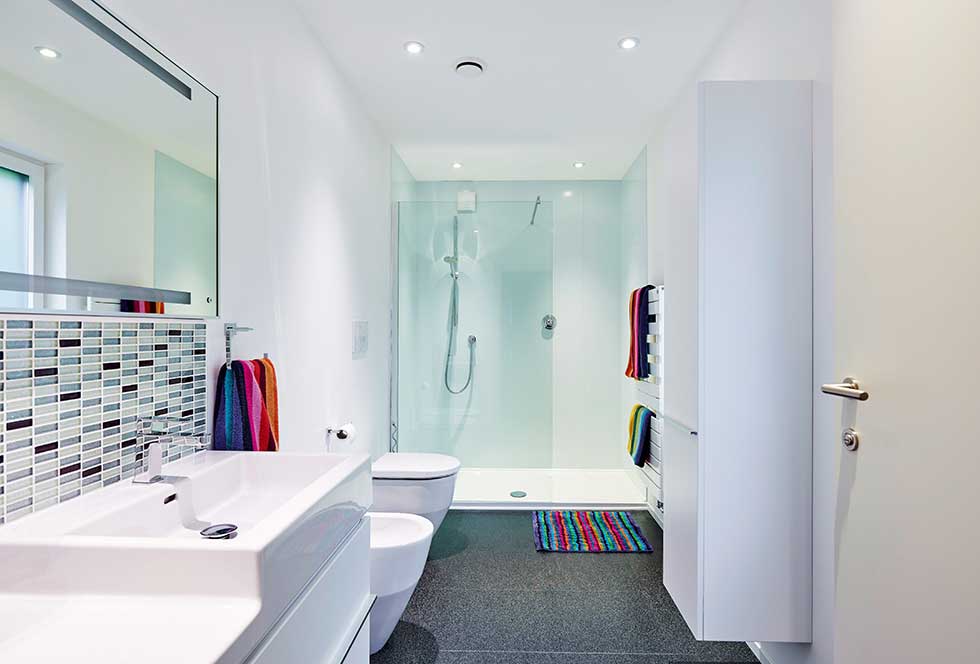 The sanitaryware is from Laufen, supplied by Riverside Ceramics. Large PVCu Whiterock wall panels from Altro ensure a low-maintenance and smart finish for the shower enclosure