Rupert and Lindsay Osborne undertook a lengthy battle for planning permission of seven years in order to self build a stunning oak-framed home. The plot they had set out to gain planning permission on formed part of the garden of their existing home, a country merchants home built in 1650.

“We had decided that we wanted to downsize, we both have a real interest in design and we also wanted the chance to use more modern technology in our home — plus this was our way of leaving a legacy,” explains Rupert.

Their existing home sat on two acres of land and plans were submitted to build a new property some 100 yards from their old house. Despite the plot forming part of their existing garden, it was considered by the planners to be outside the village boundary — and so the battle began.

Having come across Oakwrights at a Homebuilding & Renovating Show in 2007, they visited the company’s showhome in Herefordshire, and were subsequently introduced to architectural designer Pete Tonks. Plans were drawn up for an oak-framed home on the garden plot, but were turned down flat. In 2008 Rupert and Lindsay submitted a planning appeal but were once again turned down. “We decided to leave it,” explains Lindsay. “Then after five years, planning rules changed under the new government and we put forward a sustainable proposal for the new house — which would effectively be a ‘nil-bill’ home.”

“The planners couldn’t really turn it down,” continues Rupert. “Permission was finally granted in January 2014.” 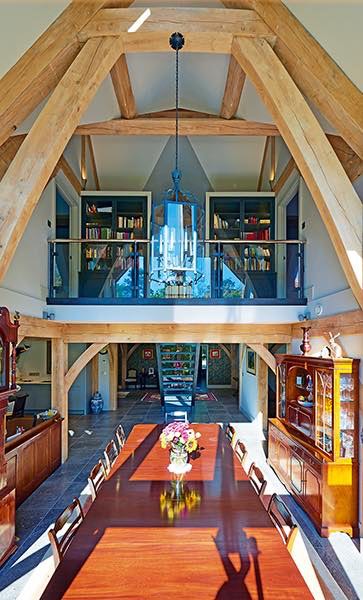 The striking staircase, designed by Lindsay, is made from steel, glass and granite and dominates the central area of the house. It leads up to a mezzanine-style landing which overlooks the double-height dining space with its stunning garden views

A design was developed, involving Pete Tonks and Oakwrights — although Rupert and Lindsay already had a very clear idea of the house they wanted.

One of the priorities for the couple, who are both landscape gardeners, was that they could enjoy the garden all year round. With this in mind, the veranda, created by large overhanging eaves that run the width of the house at the rear, plays a big role in the design of the house, plus the layout internally was designed to maximise solar gain — huge areas of glazing, all largely south-facing, flood the interiors with a clear, natural light. 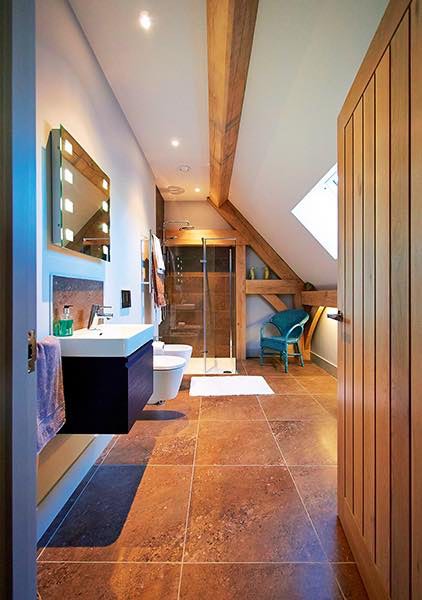 Work began on site in September 2014, with Oakwrights acting as main contractors and using local trades where possible.

Oakwrights began work on the new oak frame, which was constructed off-site in around six weeks, while groundworks were put in place on site.

When the frame arrived on site, it took just five days to erect, with only four men and the designer. 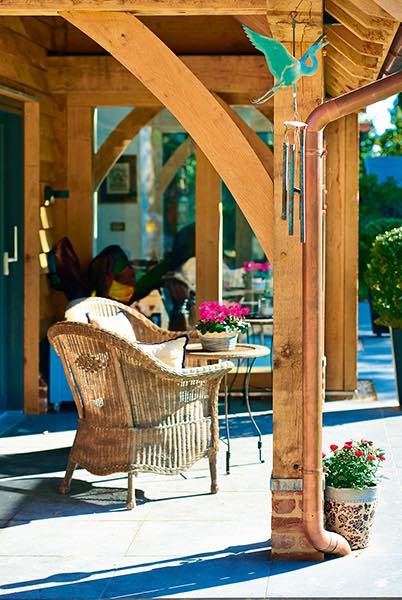 A generous veranda allows the couple, both landscape gardeners, to enjoy the outdoors all year round

Two boreholes were dug, which now pump water up from the ground at 11°C before passing through a heat exchanger in order to heat the wet underfloor heating system that operates on both the ground and first floor of the new house. The hot water is also heated by an open loop ground-source heat pump.

“In the summer, the heat pump can be turned off,” explains Rupert. “We have 16 solar panels tucked discreetly away in a sunny corner of the garden and these heat the water.” The couple receive financial rewards, in the form of the Renewable Heat Incentive, from the government for running the heat pump.

A separate borehole was dug to provide filtered and softened domestic water, so Rupert and Lindsay have no water rates to worry about. In addition, a Klargester BioDisc is used to treat waste water and only has to be emptied every four to five years. 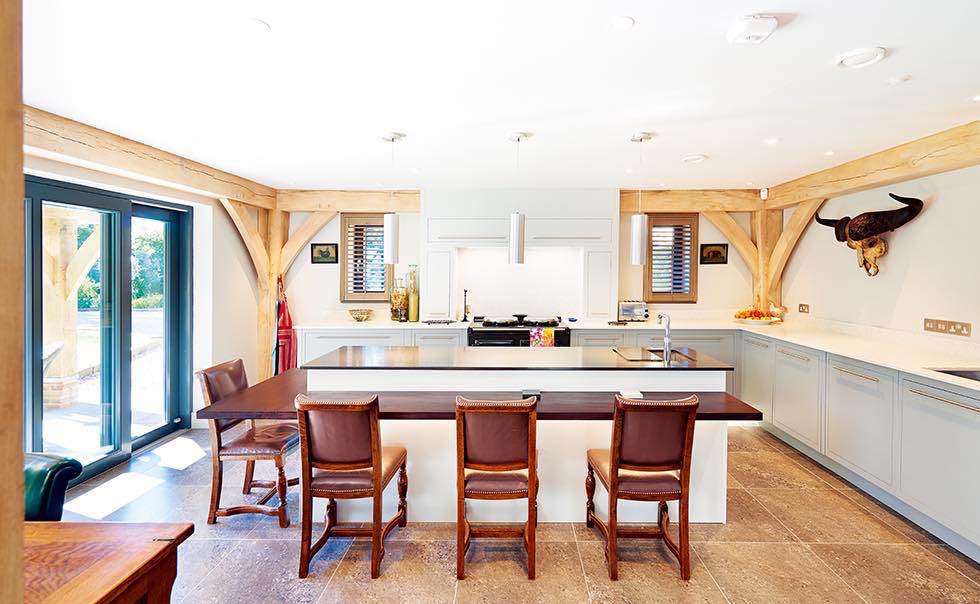 Pale flush units with stainless steel handles – to echo the steel staircase – sit alongside a Total Control AGA. A minimalist island, complete with boiling water tap and waste disposal, is flanked by a timber breakfast bar section and antique chairs 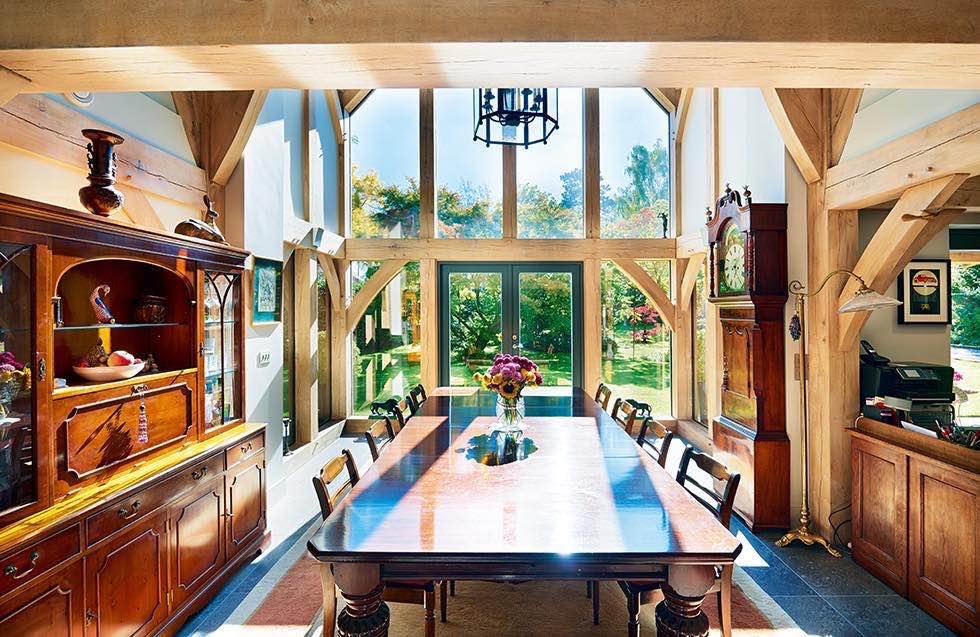 The dining space is filled with light, thanks to the impressive double-height glazed gable end 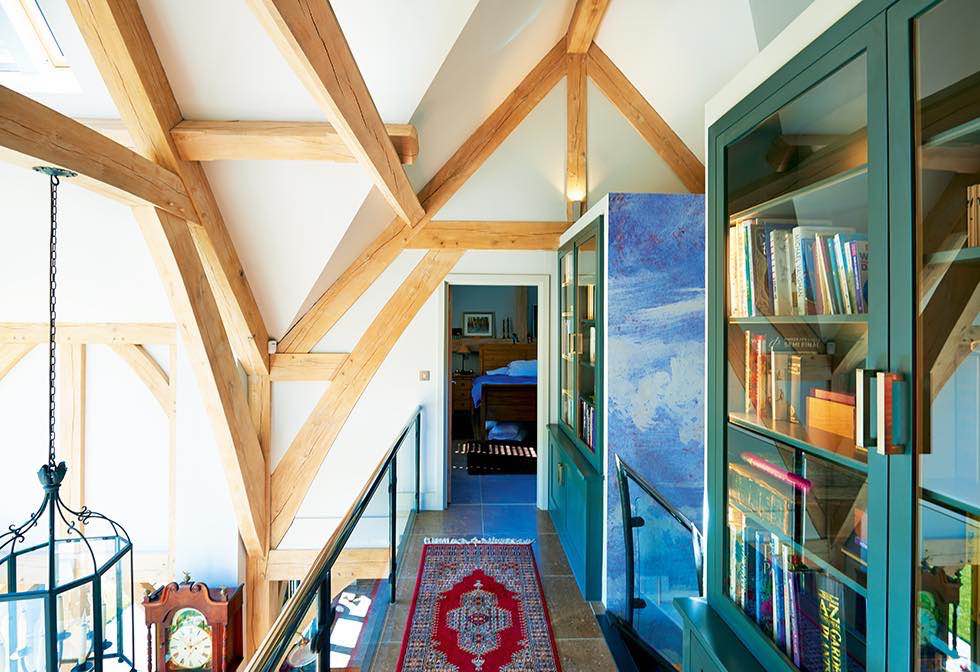 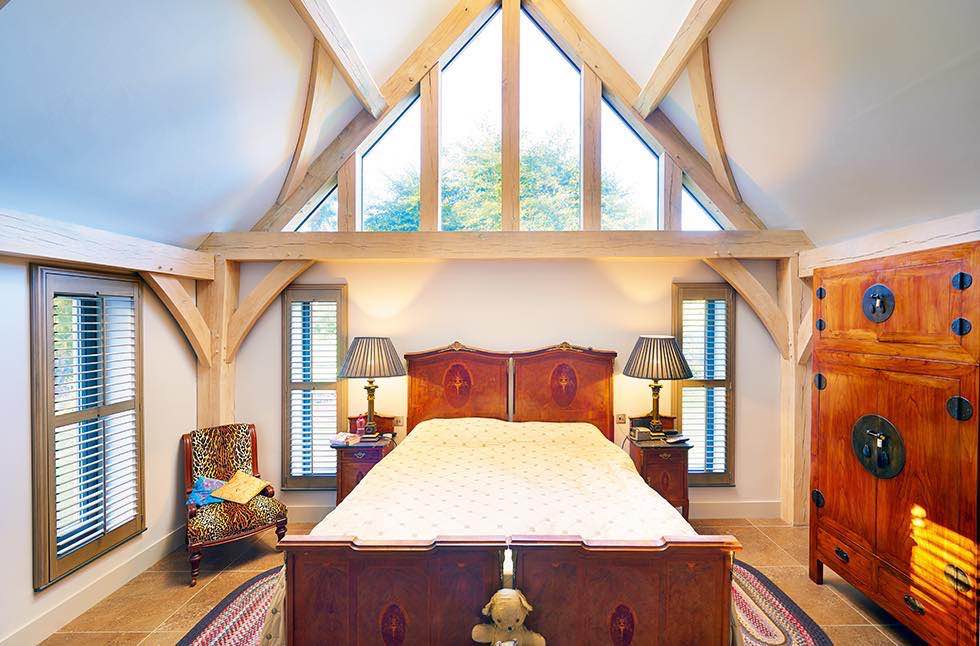 Oak beams and vaulted ceilings add character and interest, while the couple’s antique furniture and contemporary flooring, fuss-free shutters at the windows and expanses of glazing work harmoniously together 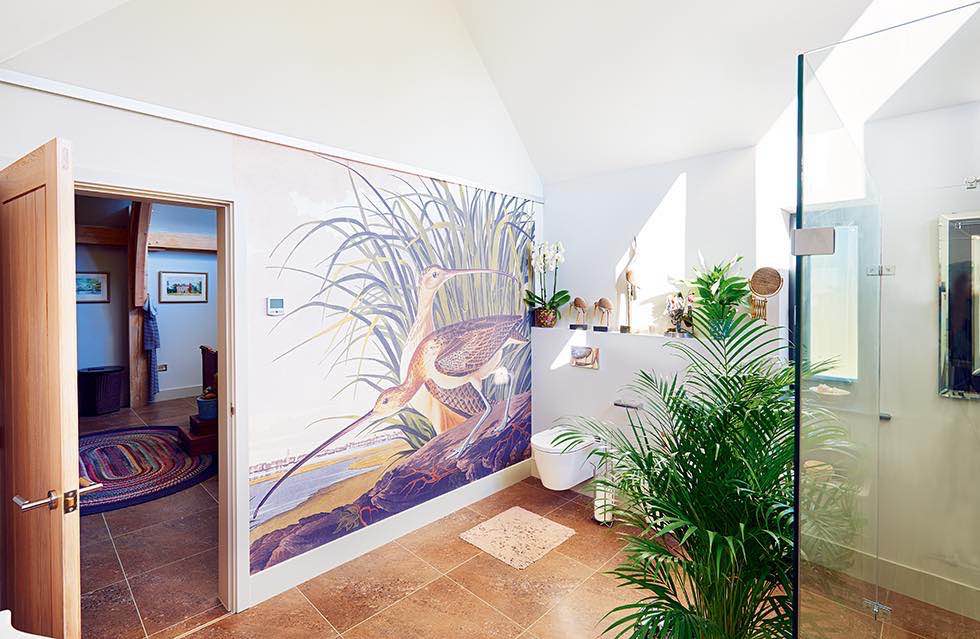