“When Anne and I decided to downsize, we began looking for a plot to build a brand new maintenance-free home for our retirement,” says Ron Skinner on how the self build project started.

Couple Rob and Anne found a prime plot just a short walk from the west Sussex village of Lindfield, which was occupied by a 72m² pre-war bungalow, constructed entirely out of asbestos sheeting and ripe for demolition. “It was the perfect spot for us, overlooking a field to the south-west and with an adjoining wood,” says Anne. “We loved the seclusion and unrestricted views.”

Ron and Anne had renovated several previous homes, but had never built a house from scratch. They researched local building companies online and spotted an interesting new property with a glazed gable end that had been designed by James Minett of Belmont Designs — a Sussex-based practice specialising in bespoke residential projects. “We asked James if the design could be adapted for our needs, and used it as a rough template,” says Ron.

“The elevated plot lends itself to something a little unusual, and because it’s so secluded and not overlooked we didn’t anticipate any objections from neighbours,” says Anne.

The planning process proved to be the most difficult part of the project. The initial application more than doubled the size of the asbestos bungalow, and was rejected on the grounds that the site stands in ‘a countryside area of development constraint’.

A size restriction of 100m² was imposed, which would have made the project unfeasible for the Skinners, who engaged a planning consultant at this stage. The consultant’s statement and a cardboard scale model built by Ron were presented to the planning committee, which overturned the recommendation for refusal and approved plans for the 175m² house. “We got everything we wanted in the end, but it was a real battle and involved additional costs,” says Anne. 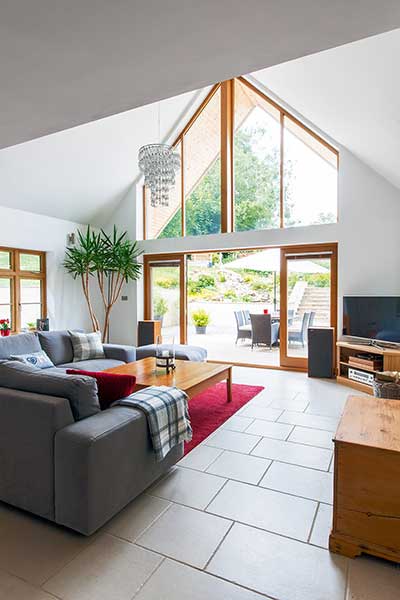 An underfloor heating system extends throughout the entire ground floor, beneath the cream Italian ceramic tiles. The system is serviced by an air-source heat pump with a dual cylinder tank, which also provides hot water for the property

The couple lived in their previous home during the build, which was completed by a local builder, with Ron taking on the role of project manager. “There was so much rain that winter that the trenches collapsed in places and the concreting was delayed, so it wasn’t a very good start,” recalls Ron, who spent almost every day on site. “Substantial land drainage needed to be installed, as well as a waste treatment plant. Just to remove all the soil cost over £10,000.”

A specialist local company was employed to construct the bespoke oak-framed element of the house, which supports 4m-wide oak doors on the ground floor, while the remainder of the structure consists of rendered blockwork walls constructed on a brick plinth. 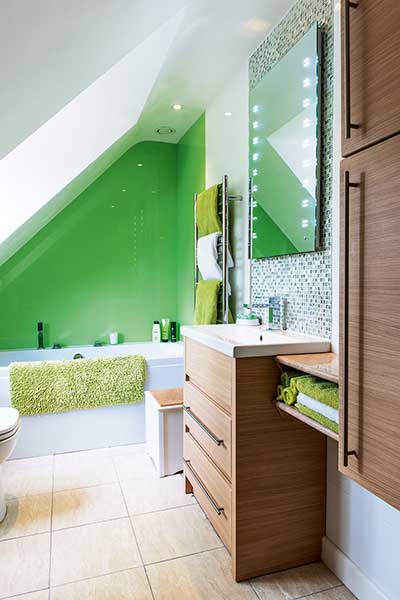 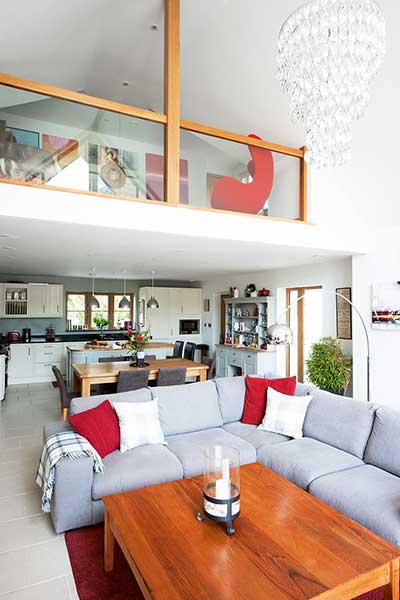 Artwork is displayed in the mezzanine seating area, which provides views through a glass balustrade and the full-height window beyond 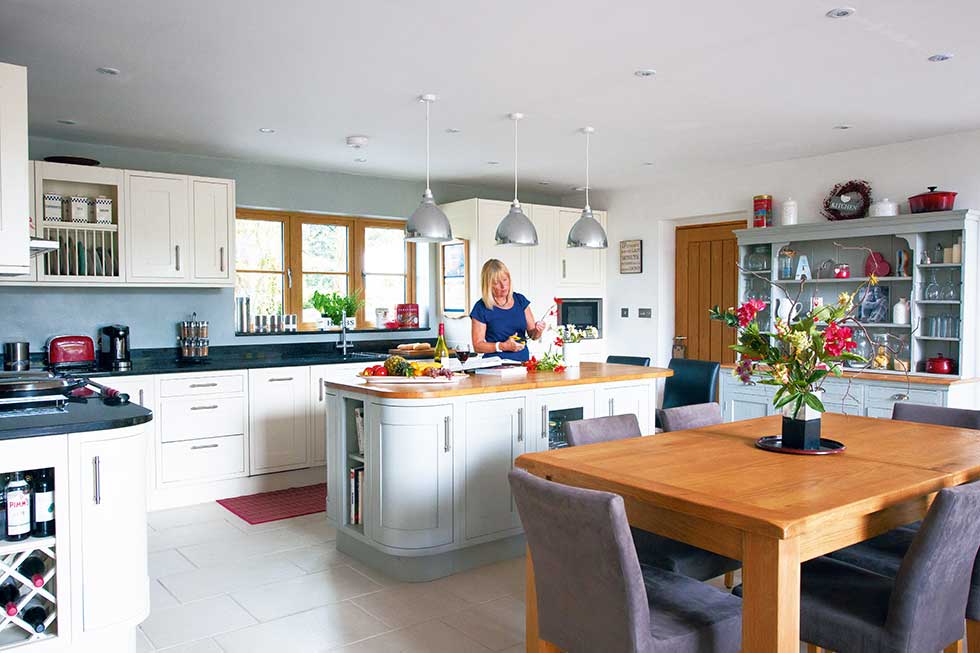 The open plan kitchen features painted cabinets with black granite worktops, which were manufactured in three large sections. A power outlet was installed in the floor for the island unit, which was fitted at a later date 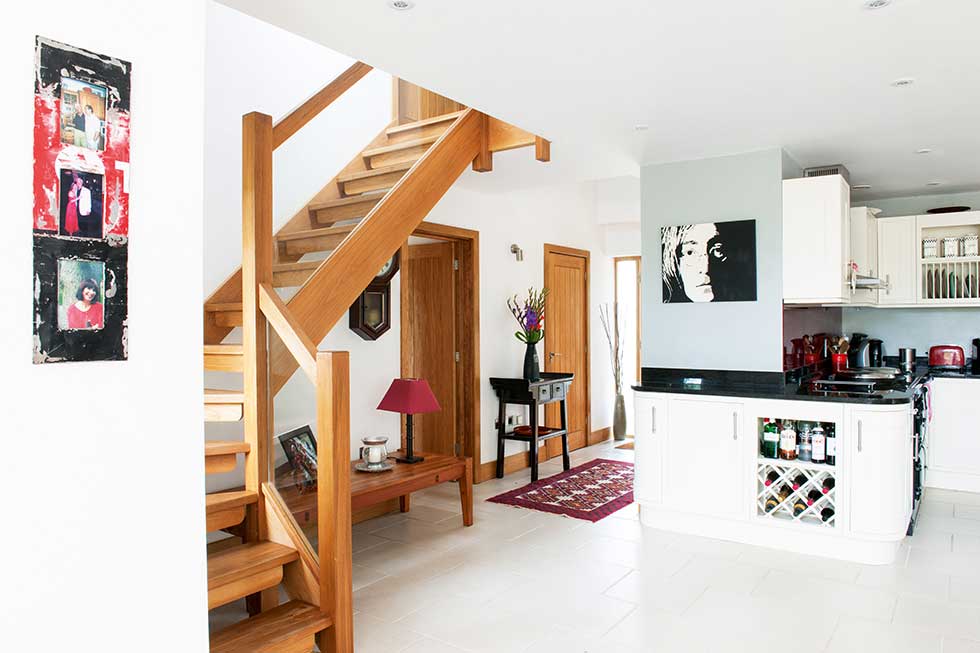 A bespoke solid oak staircase, made by a local joiner, rises up from one side of the open plan kitchen space 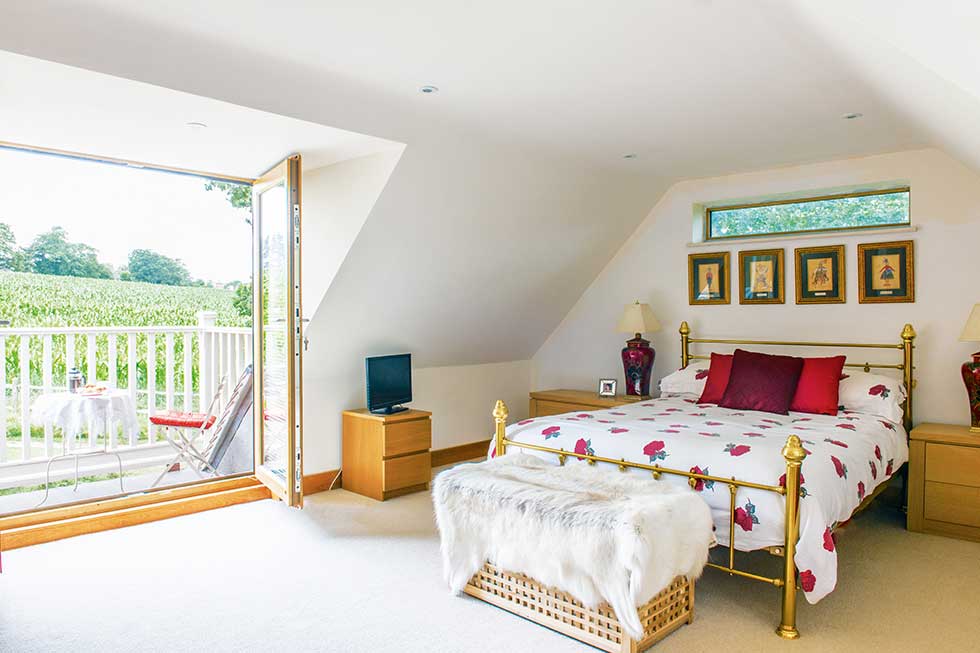 The first floor master bedroom was built into the sloping roof space and opens through glass doors on to a bespoke timber balcony overlooking the neighbouring field. There are no radiators upstairs, as the open plan design allows warm air from the ground floor underfloor heating to rise to the upper level 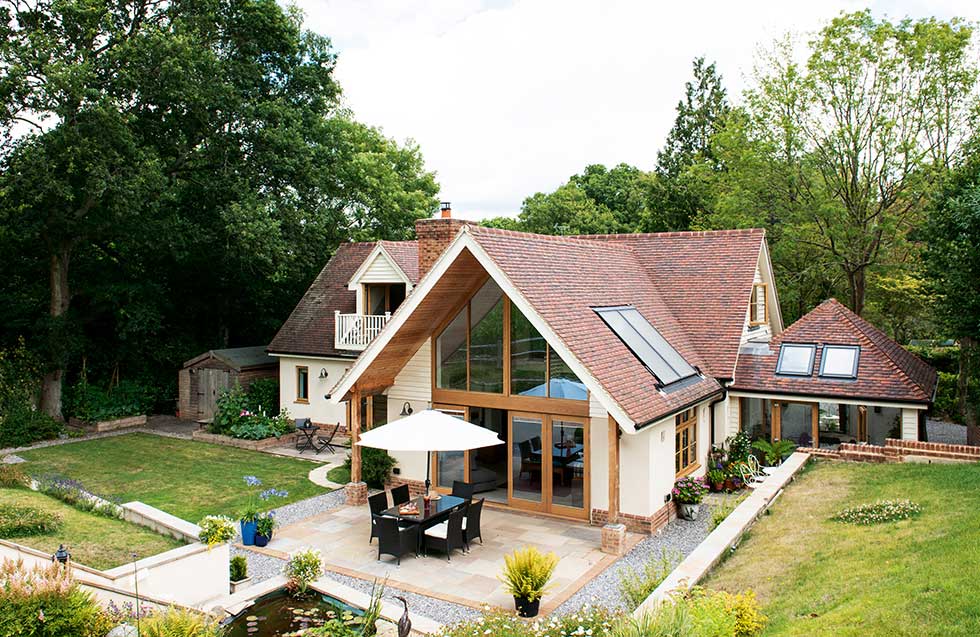 Maintenance-free self-coloured render, powder-coated black aluminium guttering and oak-effect PVCu window frames were chosen for the L-shaped dormer bungalow, which stands on a third-of-an-acre-plot overlooking a field and bordered by woodland. Steps, retaining walls, pathways and a cascading stream bring interest to the landscaped garden. The vaulted A-framed living and dining area leads directly on to a spacious outdoor seating area