Alex and Naomi Tarry have restored and extended a 16th century farmhouse in rural Suffolk, using the same skills and materials that were used to build the property more than 500 years ago.

Alex and Naomi are utterly passionate about preserving old buildings, and it is this enthusiasm and dedication that helped them complete the extensive renovation of their Grade II listed farmhouse in Suffolk. Experienced property developer Alex was looking for an untouched farmhouse with traditional outbuildings, surrounded by its own land. “We are fussy about our environment and realised it just wasn’t going to be possible to purchase something that was 100% suitable — so we decided to create it ourselves,” recalls Alex.

Surrounded by four acres of land, with a pond and a wood, the couple, who are members of the Suffolk Wildlife Trust, had found their perfect location. “From the kitchen window I can see two and a half miles down to the nearby valley and there’s not another house in sight,” says Alex. 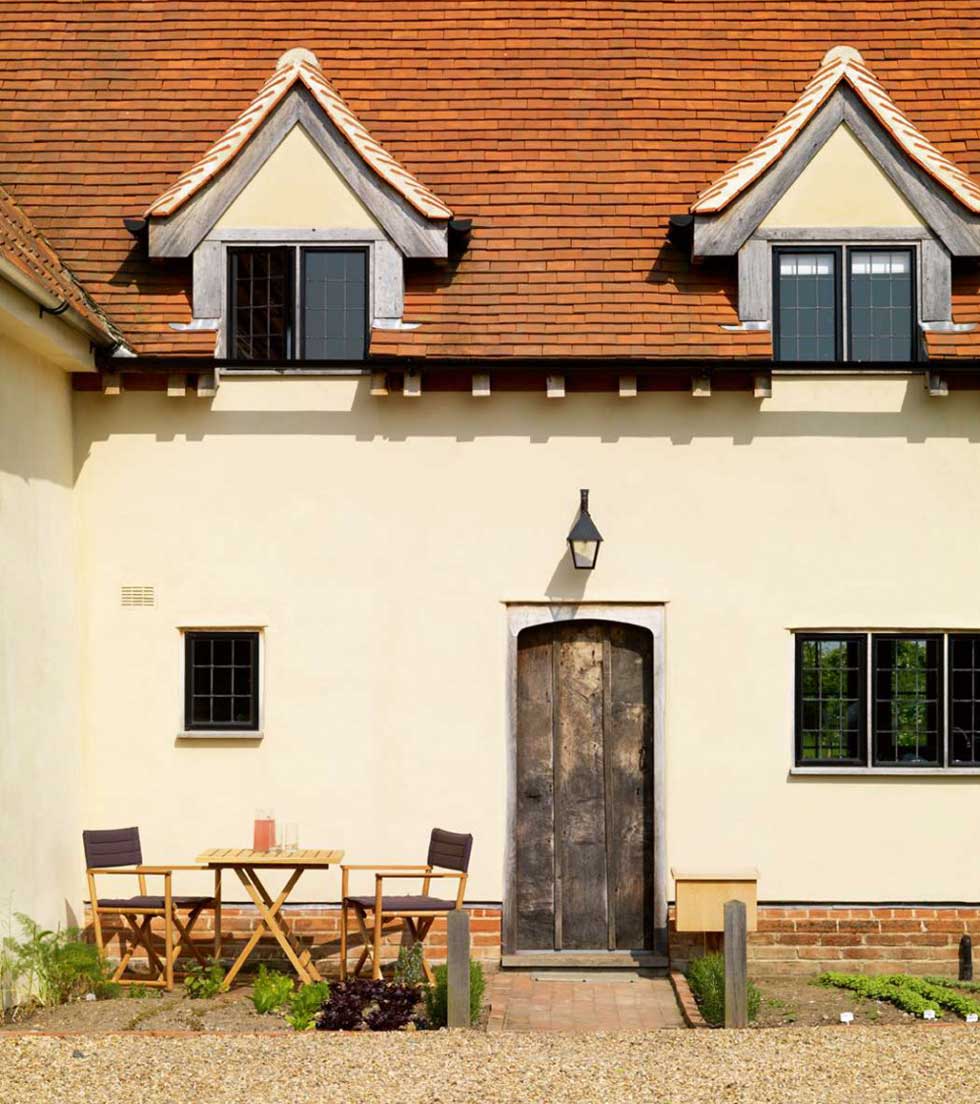 From the start Alex had a clear vision for the farmhouse as a conservation project. “For the main construction we didn’t use anything that wasn’t available to the original builders in the 16th century,” he says. Popping down to the local builders’ merchant wasn’t an option. “We had to create a network of contacts, research suppliers and learn traditional building skills.”

Alex learnt many of the skills from an old-school traditional builder, who he worked with for over five years. “It helped me get an understanding of the role that materials make in the aesthetic. A lot of people try and create an ambience with paints, but for me, it’s all about materials and how they weather with age,” he says.

There were two aspects to the project: firstly, the renovation of the original farmhouse, and secondly, a sympathetic two storey extension on the rear of the building. “We wanted to create a spacious kitchen with a separate scullery for appliances, and upstairs we wanted a master bedroom and en suite,” explains Alex. 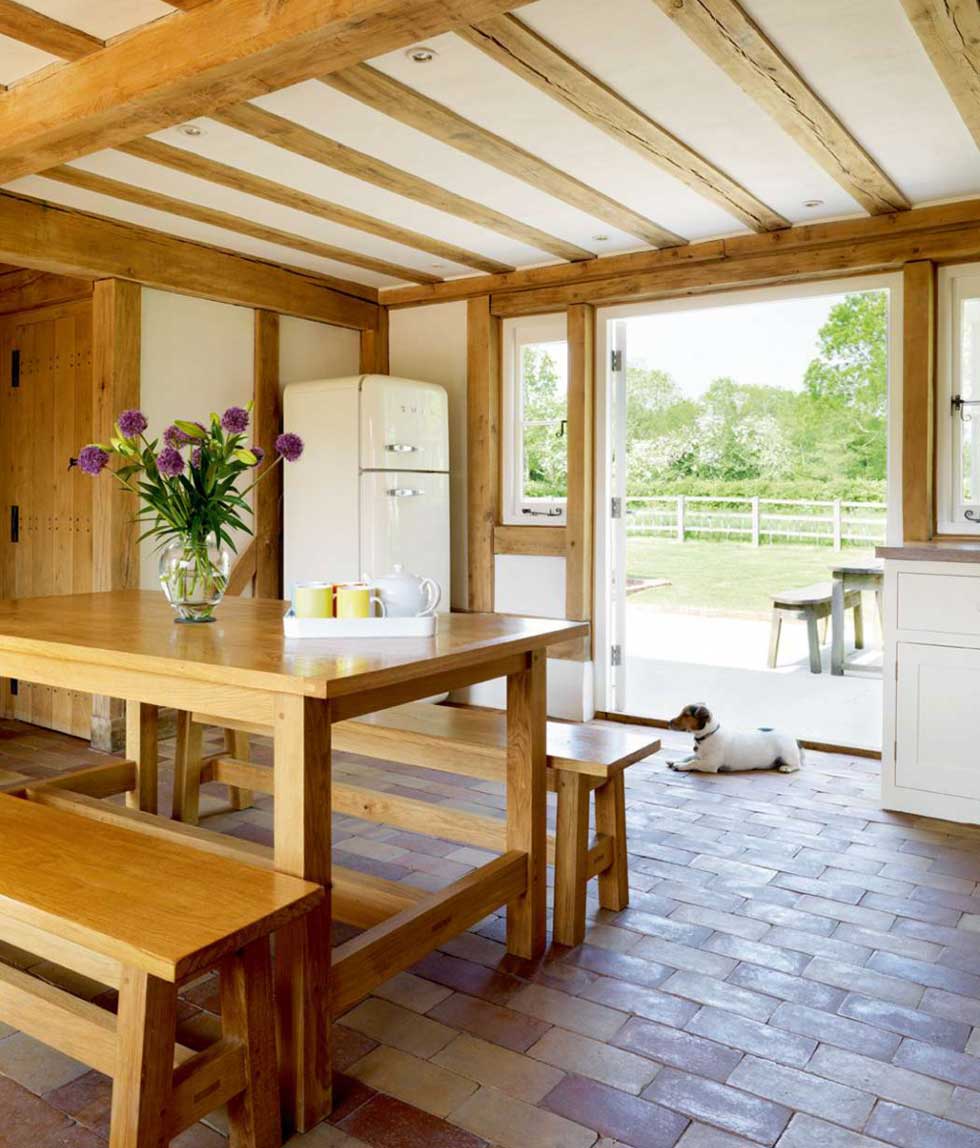 The couple enlisted the help of architect Sarah Roberts, from TW Gaze & Sons, to draw up the plans. “She offered us a depth of knowledge in building conservation, as well as an approach that helped us realise our vision,” says Alex.

To ensure that the extension was built in the style of the original farmhouse, they researched local buildings of the same era. But purely copying details was not going to get the plans through Building Regulations. “Sarah helped us get as close as we could to what we wanted and ensured that the building complied with the necessary legislation,” explains Alex.

One of the problems they had to solve was gaining the correct insulation value, as the Grade II listing disallows double glazing. “To gain the correct U-value we overcompensated with plenty of floor and roof insulation,” says Alex.

With a wealth of experience in property development – Alex renovates properties for the couple’s holiday rental company Best of Suffolk – he took on the role of main contractor. 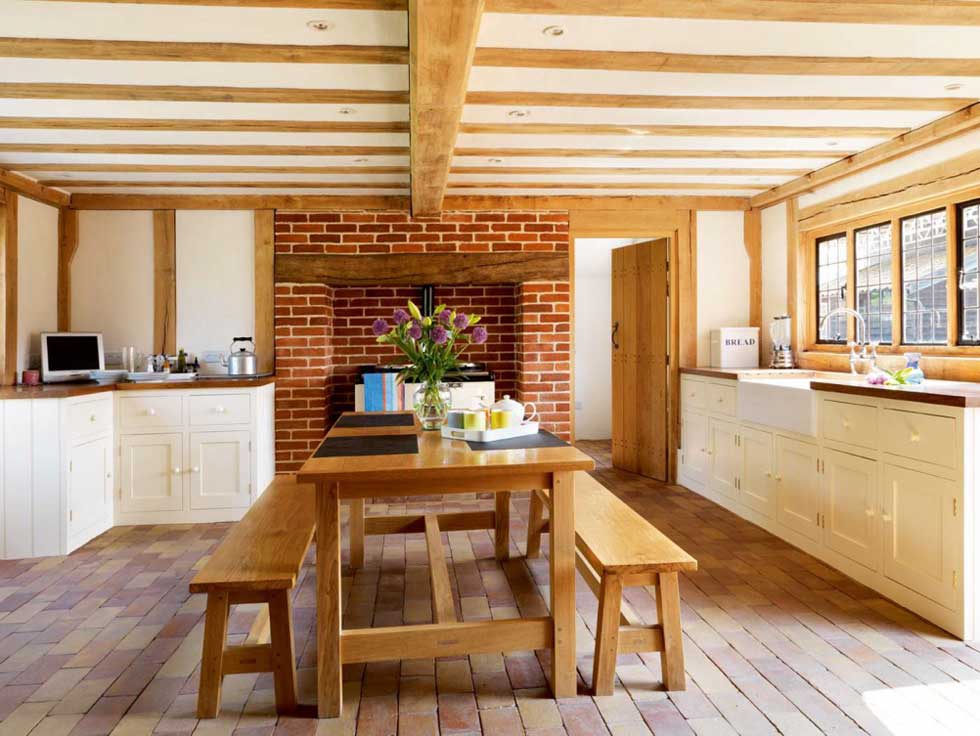 As soon as the work began it became apparent that a full renovation was going to be necessary. “We went into the project expecting to do a lot of work, but not knowing what that work would be,” says Alex. “Where we should have found a beautiful oak frame network, we found a rotten mess. Only a handful of the timbers extended to the ground and a modern softwood door frame had assumed a structural role of supporting the building,” recalls Alex.

“We saved as much of the original fabric as we could, preserving the wattle and daub and splicing in new oak beams where the original ones couldn’t be rescued. Where we found modern materials we took them out and replaced them with traditional ones,” he continues.

The next stage was the construction of the green oak frame for the extension that had been designed by Alex and the architect. “It arrived like a giant flat pack,” says Naomi. “The whole project took 11 months to complete, but it was incredible that it took only a couple of days for the 20-tonne frame to go up.”

Part of the ethos of the project was to allow the house to breathe and because of this there are no membranes around the walls. Rockwool has been used to insulate the wall structure and a multi-foil system incorporated into the roof structure. The outside frame was clad with a Scandinavian sustainable board called Heraklith: “It gives a good insulation value and allowed us more flexibility — we were able to lime render directly on top of it,” explains Alex.

Although they have removed unsuitable modern building materials from the house, there was no compromise on the heating system: “The house would be miserable to live in unless it was warm. So we renewed the heating and electrics and fitted a large boiler and an Aga,” says Alex.

Both Alex and Naomi are modest in their outlook and this comes across in the property: “It’s not about making any kind of statement. We wanted the farmhouse to sit within its setting and to have integrity — it’s the real deal,” smiles Alex.