When internationally renowned wildlife artist Michael Jackson and his wife, Ali, moved into their 17th century farmhouse in Lancashire, they thought they would live there for just three years and then it would be time to move on. But it’s now 16 years later and they are still adding the finishing touches to a mammoth renovation project which has almost doubled the size of their property. “We put so much time and effort into it that, in the end, we decided that we just didn’t want to move,” smiles Ali.

Using materials sourced from all over Lancashire, the couple’s aim was to extend and restore the farmhouse to such a high standard that no one would be able to tell where the old property ended and the new began. When Michael and Ali first saw the house in the late 1980s it was small (just 30ft x 25ft), dark and damp, but they saw its potential and loved its location overlooking rolling countryside near Preston. “It was a bit like the house that time forgot,” recalls Ali. “Although it was very dilapidated, is was also incredibly beautiful and peaceful – the perfect place for Michael to paint.”

The existing house was too small for their needs, so Micheal and Ali decided to extend the footprint to almost double its size; building a two storey extension to the side and a conservatory at the back. “We did lots of forward planning and bought materials as we found them,” says Ali. “We wanted everything to be reclaimed so that whatever we did wouldn’t stand out like a sore thumb; in just a short time we ended up with piles of stones, windows and timber which would all be used.” This included a series of arched windows salvaged from an old hospital in Preston, which were stored and later used as the basis for the new conservatory. 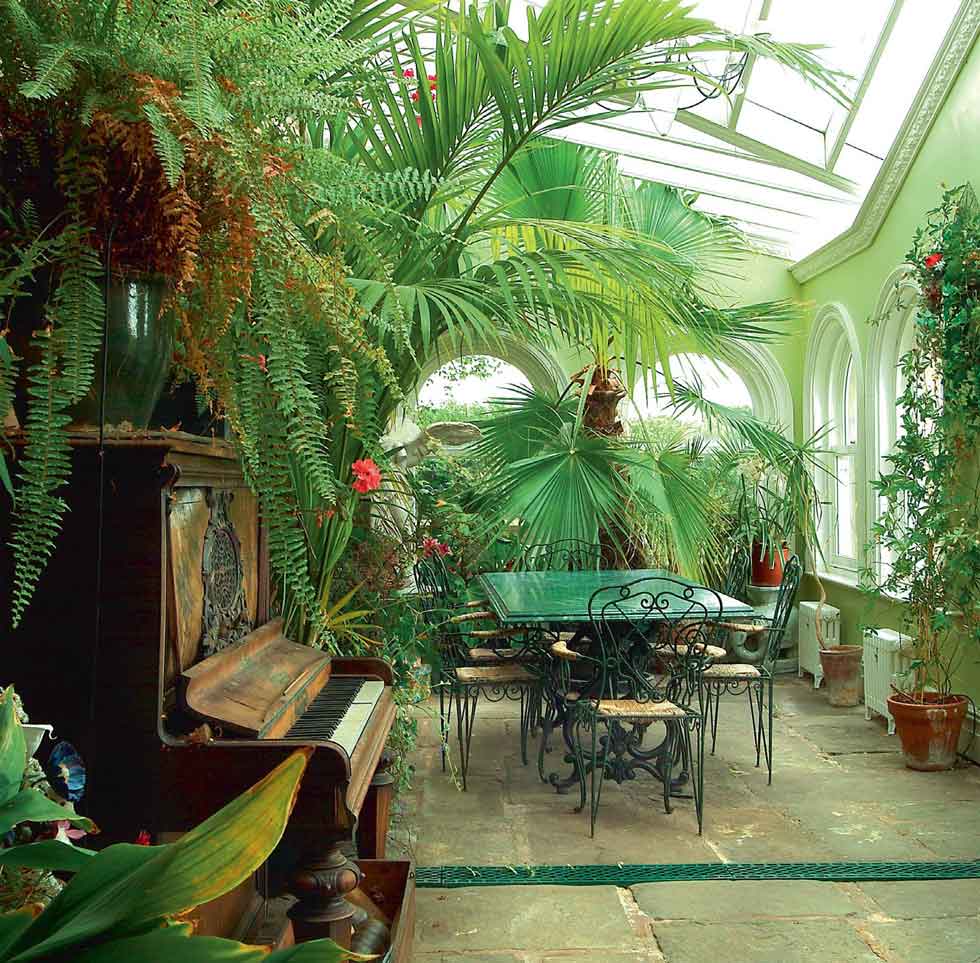 For the first 12 months the couple lived with Michael’s parents, finishing their ‘day jobs’ at 5pm to start an evening shift on the farmhouse. They both worked until 11pm every night and weekend, with the exception of Sunday evenings which was the only time they allowed themselves to unwind. “Neither of us wanted to live in the middle of the chaos,” says Ali. “Besides, almost every room in the whole house needed taking back to a shell so there wasn’t anywhere for us to go anyway!”

The house had already been re-roofed before they moved in, but every ceiling and most of the joists (which were rotten) came down, along with a number of non-supporting internal walls. “The house was full of dirt,” remembers Michael. “It took months for us to get all the rubbish out and it looked like a demolition site. In the kitchen you could look up through two floors to the slate roof.” All the floors were asphalt and there was no damp-proof course, so these were taken up and the floors dug down several inches to accommodate a Visqueen lining topped with concrete, ready for flagstones to be laid. Some rooms still had their original flagstones, which were cleaned and relaid face down. 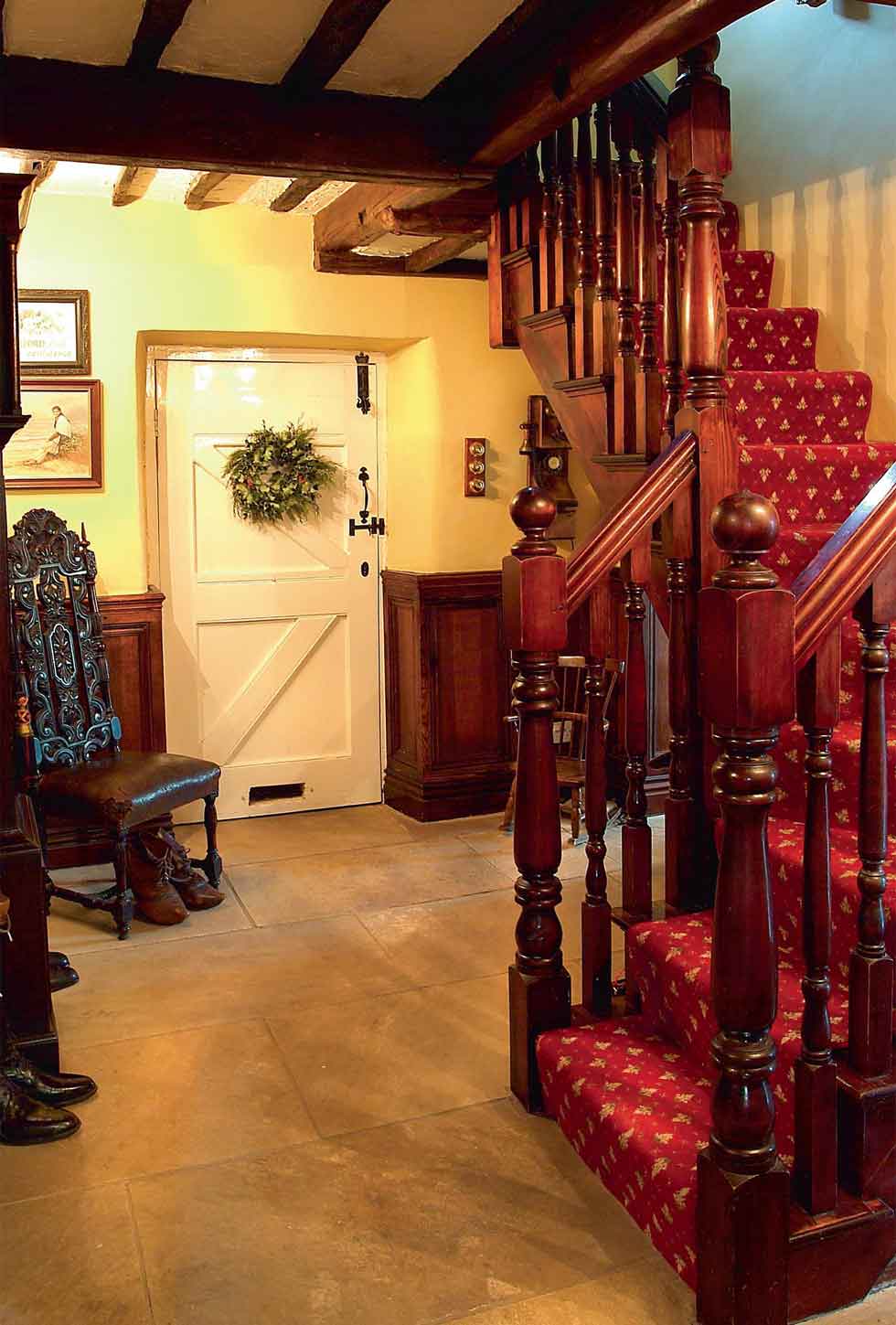 The kitchen was much smaller when the couple bought the house, with stairs at one end opening directly into the room and a former pantry-turned- washroom at the other. The couple made a kite winder staircase which was centrally positioned in the hallway and the pantry wall was knocked down in order to create a larger kitchen area. New carcasses for the units were built and finished with elm doors which were then sanded, painted and varnished with a distressed look.

The original farmhouse had four bedrooms, two of them linked by a long, narrow corridor. Micheal and Ali took space from one of the bedrooms to give them a larger landing. A further bedroom was created in the new extension, which also features a bathroom, a second staircase and a utility room. “When we moved in, the washing machine, dryer and freezer were all in a shed outside but it was awful having to run backwards and forwards in all weathers, so the utility room was a top priority,” says Ali. 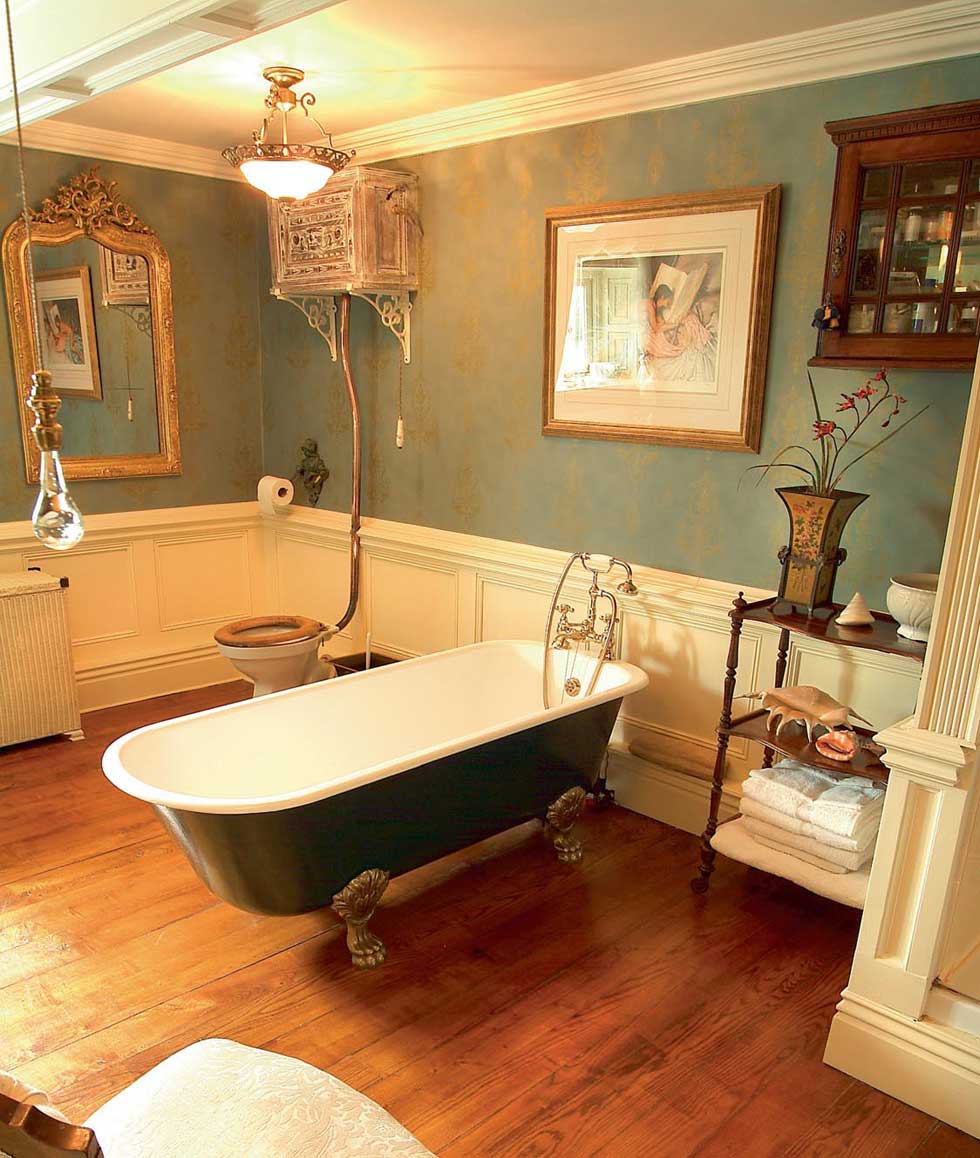 Getting planning permission for the extension and conservatory wasn’t without its problems. Chorley Borough Council asked them to change the design but, after marginal alterations, the plans were finally passed. The extension was straightforward to build with standard footings. The walls were built of reclaimed stone to match the existing property, but it took several years to source enough materials to get the extension off the ground and all the stone for the gable end wall was cropped and dressed by hand to achieve a good face. “The stone is very particular to this area and has a distinctive buff tone,” says Ali. “We also used a limebased mortar as we wanted everything to be just right.

“However, we made a major mistake by chipping off all the brushed render which had been painted on the outside of the original part of the house. We hadn’t realised that it was protecting the property against the elements and we kept finding big damp patches where the rain had found its way through. One night the rain was particularly relentless and driving against the house almost horizontally. I was in the sitting room when, all of a sudden, a flood of water ripped through the wallpaper and poured down the wall!” Rather than rerender, the couple decided that each time they tackled a room they would cover the walls with tar, baton them and fix foil-backed plaster – board onto the wood, leaving air vents at intervals. 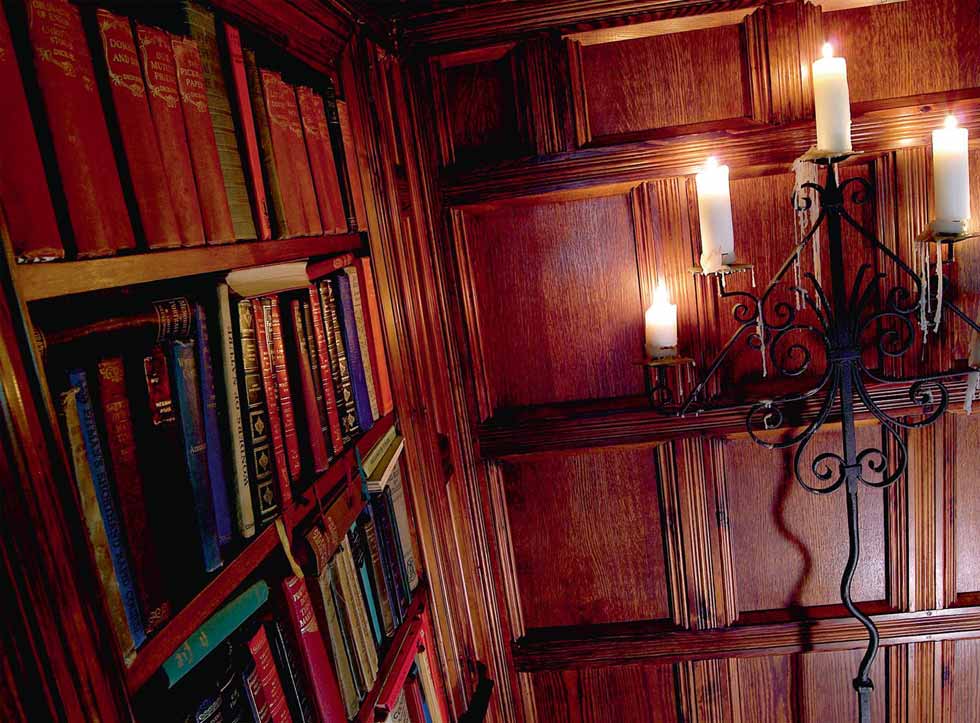 Initially, Micheal did most of the joinery and building work himself, including all the wood panelling in the hallway which he handmitred, piece by piece, over several months. “He would paint during the day and work on the house at night,” recalls Ali. “When our son was very little I would use the time when he was asleep during the day to stain and varnish the wood or to decorate. We effectively did a project a year, working very hard to earn the money for each stage, and that’s why it has taken so long. We stretched ourselves to buy the house in the first place and have been constantly working on it ever since. It was only later that Michael became too busy to do everything himself.” 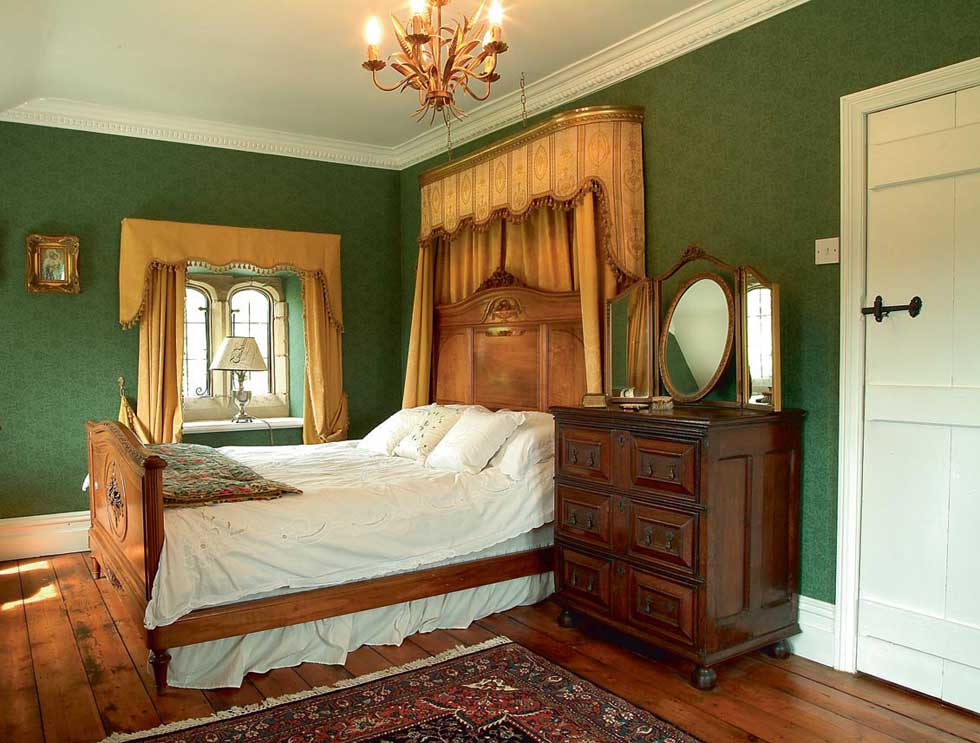 The conservatory was built around the reclaimed arched windows. “Micheal had an idea of the look he wanted to achieve, so it was pure coincidence that the windows from the hospital were just what he was after. He did a deal with the people demolishing the hospital and saved the windows from the skip. We drew the plans for the conservatory around them and when the time came to start the build, we laid the windows on the floor and Michael built a template for the builders to work from so that the windows went exactly into place.” All the hard work was certainly worth it because the light and airy space is now filled with lush flora and fauna including exotic bamboos and trailing ferns.

One of the biggest mistakes made during the whole renovation project involved the chimney stack. “We were admiring the new stack with our builder and praising him for doing such a good job,” says Ali. “It was only when he’d gone that we wondered where he’d found the stone to build the fascia and we realised that he’d cut up our stone fire surround that was for the sitting room!”

It was a relatively small price to pay for a renovation project which has transformed a tired, run-down farmhouse into a beautifully restored and extended family home. The property, which was once their second workplace, has become the inspirational location for some of Michael’s most successful works of art.

His new studio, therefore, was the icing on the cake. Separate from the house, but in keeping with its style, it’s built of stone reclaimed from a derelict old hall topped up with quantities bought from Ribble Reclamation. Old kerbs chopped in half create a stone course along the edge of the roof and the window finishings came from a bank in Preston which was being knocked down. 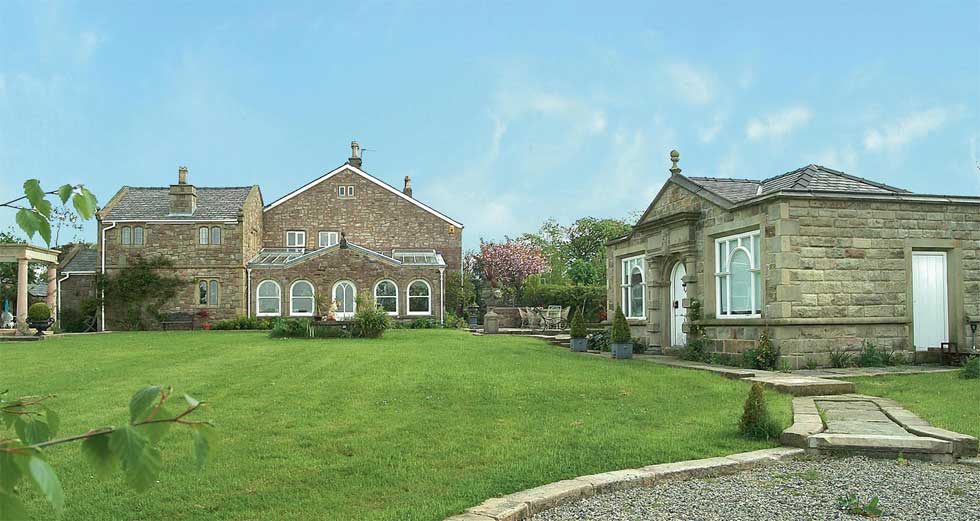 Even the external details of the farmhouse, such as the paths and outbuildings, have been given a new lease of life with old materials. The path around the house and studio is created from millstone flags which Michael and Ali forklifted into place between them, and an old pigsty and shed have been faced with reclaimed stone.

“Although we wanted everything to look as though it had been here for years, we still wanted it to look presentable,” says Ali. “It’s been a long project and we still haven’t finished, but the satisfaction of doing so much of the work ourselves, and knowing that our house will stand the test of time, makes it all worth the wait. I thought we’d only be in this house for three years but now we can’t imagine living anywhere else.”

There is no better way to complement the character of a period home – or create a ready-aged look in a new property – than to use as many reclaimed materials as possible. However, buying the right items is not as simple as ordering new products, and is often the result of frequent visits to salvage yards coupled with many hours spent trawling websites such as salvo.co.uk and eBay.co.uk. Some materials are easier to source than others: roof tiles, slates, timber, bricks, doors and radiators are quite widely available, but you will find getting the right windows, fireplaces and unique ornamentals a little tougher – especially now ‘buying old’ has become so popular, with the good pieces getting snapped up quite quickly. Even classic reclaimed items such as cast-iron baths are increasingly harder to find at bargain prices. Although it can be heartbreaking to find exactly what you want, only not in the right quantity, bear in mind that with salvaged materials you always need to allow for more wastage for items such as roof tiles and bricks, so don’t take the risk of buying too few.