The eaves of a house are where the edges of the roof overhang the face of the wall. How much they overhang is down to you, the homeowner (working with your designer). All eaves project a little, but some designs employ a very deep overhang and can be used to striking architectural effect — as well as creating a veranda which seems to be the natural progression for designs that try to blend the outside and indoor spaces.

Why the Deep Overhang?

The eaves of a house have the very important job of ensuring the rainwater that hits the roof is thrown clear of the walls and windows, protecting them from water damage. They also help to prevent the ingress of water where the wall meets the roof.

In sunny climes, eaves can be designed specifically to control solar penetration, depending on the orientation of the building, the climate and the internal layout. However, they also make up an important part of the architecture of a building, with their proportions and the amount they project beyond the walls heavily impacting the overall look of the house.

Overhanging eaves are typical of certain architectural styles — for example, homes built during the Arts & Crafts era, where the eaves came down low, typically reaching down to first floor level in many parts, often using a catslide roof to at least one elevation, adding to the asymmetrical character of the style.

Flared Eaves
On this oak frame home (by Oakwrights) the roofline is flared and extended to create a covered patio area. 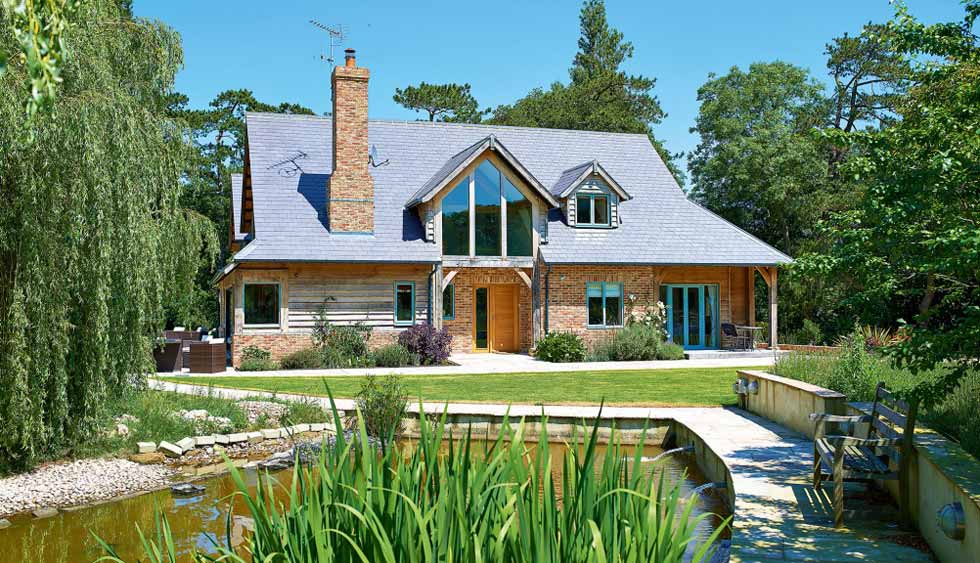 How to Achieve Overhanging Eaves

There are several ways in which over-hanging eaves are constructed and supported — influenced mainly by the look you are hoping to achieve, but partly by the construction of the rest of the house. The way in which the eaves are supported in particular has a huge influence on the final appearance and there are a whole host of ways in which this can be done depending on the design.

In terms of insulation, there is no need to insulate the space between the underside of the overhang. The design of your roof will determine what kind of ventilation you require, but in the case of a warm roof (where the insulation is placed on top of the rafters), any gap between the roof inside and the projecting eaves must be fully sealed. However, if you have a cold roof – where the space between the joists, which make up the floor of the roof-space is insulated – some ventilation will be required.