How to Choose a SIPs System | Homebuilding & Renovating Skip to content

Wall thickness was a priority on this narrow site. The Kingspan TEK® Building System was sourced from SIPs@Clays

The debate over which is the best construction system continues to rumble on, with no real prospect of agreement or resolution. However, even once you’ve opted for a particular system – be it masonry, timber frame, ICF (insulated concrete formwork) or structural insulated panels (SIPs), for instance – there are still choices and decisions to be made. Here, we look at SIPs in detail and explore the different options available.

Essentially a SIP is a panel consisting of a rigid foam insulating core bonded between two structural facings, typically oriented strand board (OSB) but this can also be plywood or metal. The bonding of the insulation to the facing material creates a stress that allows the whole panel to withstand structural loads.

There are two distinct differences between different SIPs products: the insulation material which makes up the core, and the method of connecting the panels. To be considered a genuine SIP the insulation can only be a rigid foam and therefore polyurethane (PUR), polyisocyanurate (PIR) or polystyrene (PS).

There is another ongoing debate about which type of PS is best, but in terms of insulation quality there is really little to choose between the two. A paper entitled The Way To Go published by Harvard University in 2008 essentially suggested that polystyrene, on a global scale, is a negative thing from an environmental perspective; so maybe which is the best insulator is a bit of a moot point.

A paper published by Prathan Rungthonkit and Jian Yang at the School of Civil Engineering at the University of Birmingham (Behaviour of Structural Insulated Panels (SIPS) Under Short-Term and Long-Term Loadings) compares the three options. Laboratory testing shows that a dimensional timber spline (which consists of a 50x100mm softwood between joints) performs best in structural terms, i.e. it supports a greater load before failure and deflects less under loads.

It’s worth noting that there are also panels sometimes referred to as SIPs that use sustainable insulation materials — hemp, hemp lime, straw, etc. While using sustainable insulation may be a good thing, these panels need dimensional timber on all four sides and the insulation is not bonded to the sheet material being used as an infill. So these are, in fact, closed panel timber frame systems, not SIPs.

From a technical perspective, choosing between SIPs systems comes down to a decision on the insulation (PUR or PS) and the panel jointing method — these are, after all, the only features that really differentiate the various options. Here we look at the principal issues surrounding these two points.

How Much do SIPs Cost?

None of the main suppliers will commit on this point. “Unfortunately it is very difficult to give you an idea of costs, as this is very much dependent on the complexity of the building design,” says Andrew Porter of SIPS@Clays. Other suppliers say broadly the same.

Again, all the major players say a similar thing: they all work to a 60-year design life, but state that this is the minimum standard. There are a few buildings in the US dating from the 1930s and 1940s, but the technology only really got going in the 1970s, so we only have around a 40-year history to work with. That history shows that SIPs buildings continue to perform well, and that different systems or core insulation materials have no impact on the life of the building.

Having said that, it is recognised that SIPs do not perform well in flood situations; be that internally or externally caused. The sealed nature of a SIPs wall means that it takes a long time to dry out. This can lead to the OSB or plywood delaminating (i.e. falling to bits), which tends to happen at low level and will have a serious impact on a panel’s stability.

Here there is inarguable difference.

What this means is that PUR transmits about 40 per cent less heat for a given thickness, so PUR SIPs can achieve the same U value in a wall with a thinner cross section. Constructing a wall with a U value of 0.2W/m2 will make it around 212mm thick overall. Achieving the same U value with EPS will mean the wall will be 262mm thick. The question then is does that loss of 50mm internal floor space matter to you?

Wall thickness aside, there are other differences too. The insulation core of PUR panels is autohesively bonded to the OSB facings; this means that the PUR is injected in liquid form into the panel, where it expands. The panels are held at high pressure, making the PUR foam bond to the OSB. It is said that this provides better adhesion than the glues used in panels using PS as the core insulation.

It should also be noted that there is a geographical difference. PS is the insulation of choice across the US, where the use of PUR remains diminishingly small. This is perhaps a legacy issue: SIPs were developed in the country using PS, and when the technology began to take off there in the ’70s and ’80s, PS was virtually the only option.

Similarly, PS has many adherents in the big German off-site house manufacturers, where it is used as the core insulation and as an external insulation. The sense there is that it works so don’t change it. Conversely in the UK PUR is the big player, with the Kingspan TEK® Building System dominating the market.

But the quality of insulation is not just about thermal conductivity, it is also about thermal bridges – said to account for 25 per cent of the heat escaping from a house – and airtightness. This strikes at the joints, so the jointing method and the competence of the erection team is key.

Relatively high levels of airtightness are available as standard with all SIPs systems but actually achieving this is reliant on the competence and diligence of the erection team. The best system available can be wrecked by sloppy on-site workmanship. Airtightness is, ultimately, a function of that team. 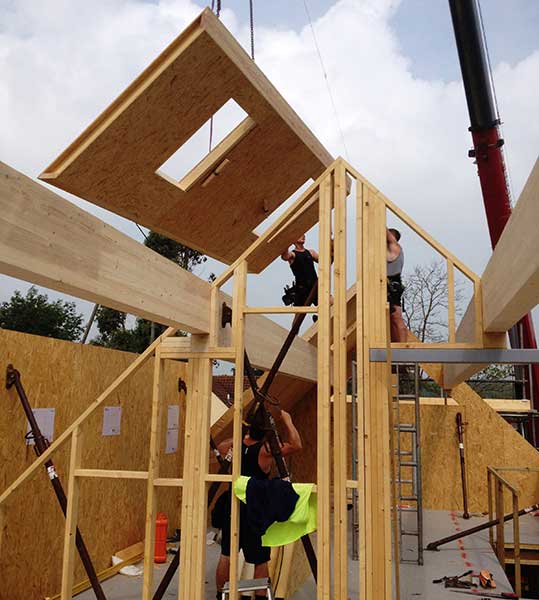 Wall thickness was a priority on this narrow site. The Kingspan TEK® Building System – sourced from SIPS@Clays, who provided the erection team – were specified by the self builder behind this project; the PUR core gives this system a comparatively thinner cross profile

But this is not the whole story. SIPs are subject to ‘creep’. The bonding of the insulation core to the facing material puts stress on that facing. Over time that stress begins to release and the panels ‘creep’. As the aforementioned University of Birmingham paper suggests, this movement can be measured in millimetres, and dimensional timber spline joints perform best in this respect.

The major impact of this is on insulation and airtightness and there is an argument that this really only applies to PUR systems due to the autohesivity (the bonding) of the core insulation.

The manufacture and use of PS has been subject to a lot of regulation in recent years to eliminate the use of Ozone depleting and toxic gases in its manufacture, particularly in the UK and EU. Now, neither PS nor PUR use toxic or Ozone depleting gases; both use gases with low global warming potential.

In terms of recycling, EPS and PUR can be recycled but XPS cannot. Whether EPS or PUR actually are recycled is another question. One major UK SIPs manufacturer using EPS compresses the waste into solid, heavy blocks which are then shipped to China for ‘recycling’. Whether this is motivated by environmental concerns or merely to meet EU regulations is still in question.

So, in conclusion, the cost of the system itself will not make or break the deal.

The key is to do your research on any product you are interested in. TRADA (Timber Research and Development Authority) suggest third-party certification – which means BBA approval – is a good idea. But over and above this, they suggest that the choice will be between cost and availability — the cheapest local supplier perhaps when you take delivery fees in to account.

“In my own opinion, the competence of the supplier is more important than the type of insulation that forms the core,” adds Andrew Porter of SIPS@Clays, who also recommends taking up references. Always good advice.

So, disappointingly perhaps, we arrive at a position where, technically at least, there is little to choose between the various SIPs options.