Many self builders choose to emulate Georgian style for its associations with prestige and power. The look is clean, symmetrical and offers good resale potential should you wish to move on — in fact most of the new homes we see today, built by volume housebuilders take cues from this style.

Illustrated by the homes built between 1714 and the 1830s, the style evolved in a period of much social and industrial change in Britain. People wanted to reflect their growing worldliness in the look of their homes, which drew upon classical architectural elements born in Greek and Roman cities.

As the style spanned a period of over 100 years, it underwent much change, so the style itself is split into several categories and was also adapted to suit differing economic restraints.

What are the key characteristics of Georgian style?

Because the Georgian era was so long, it is usually split into early, mid and late phases, but in general, Georgian homes stood for simplicity, power, prestige and stability, which was particularly important in England after the political and religious upheavals of the 17th century.

Proportion is key to Georgian architecture, with houses of the period following strict rules in terms of size and position of windows and doors, roof pitches and so on.

A house built to the later Georgian style

Why is Georgian style so popular?

The crucial Georgian principles of architecture are things we look for in our homes today — large, tall windows letting in lots of light; plenty of kerb appeal; elegance and simplicity of design; and, internally, tall ceiling heights and a sense of openness.

It’s also a popular house style because it’s cheap to build relative to the more ornate styles. Georgian homes tend to be boxy in shape and therefore have minimal edges, nooks, valleys and ridges — all of which add to the cost of construction and time on site.

How to get Georgian style right

The Georgian era ran over such a long period that its style evolved — if you’re building Georgian, you need to make it clear which style you’re working towards. The classical end of Georgian, with its columns and parapets, is noticeably removed from the softer later era, with its heavier roof line.

The key to Georgian domestic architecture is proportion. Homes of this time ascribe to what is known as the golden ratio which sets the proportions of the various sections of the build and features like its doors and windows. Even the humble workers’ cottages built in this era follow this design principle.

It is hard to build in the Georgian style without creating a pastiche, so being influenced by the style is usually preferable to copying it. However, several architects specialise in this style and can be relied upon to create a stunning modern example.

Inside, a classical Georgian floorplan has a large central hallway, with evenly sized reception rooms to either side. Upstairs is similarly formal and rooms are placed so that the windows can follow the pattern set by the ground floor. Dormer windows and mansard (dual-pitch) roofs – which permitted large, lighter rooms in the roof – were popular in the earlier Georgian years.

Developers get Georgian wrong in several ways, but the easiest to spot is in the windows. They are usually the wrong size and shape; they are positioned incorrectly; and they are rarely even sash style (see BELOW for an example of how it should be done).

Window choice is critical: they must have thin, refined glazing bars and deeper-than-standard reveals (the way the window is inset against the brickwork — in too many modern houses it is almost flush). Follow the above principles and pick the right product. 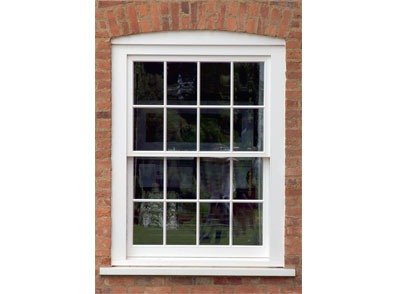 The shallower the roof, the more dominant the façade, meaning that Georgians – who really valued kerb appeal – tended to either opt for a very shallow pitch or they would cover part of it with a parapet — either way, reducing its impact.

Successful Georgian interior design is all about proportions too. In general, the ceiling heights on the ground floor should be taller than those on the first floor; those on the first taller than those on the second (which may have been originally servant’s quarters) — this is one of the key characteristics that marks Georgian architecture out from, say, Victorian homes. Concentrate, too, on a grand staircase, preferably with a long, winding handrail, and classically derived mouldings. 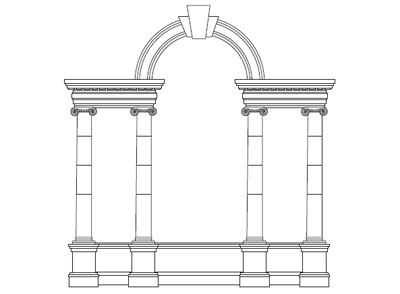 The Venetian window style is one of the classical elements of Georgian architecture that retain its popularity today.