The name Ian Pritchett has been well-known in building conservation circles for nearly 30 years. Ian, a builder, has written and lectured extensively, mainly in association with SPAB (the Society for the Protection of Ancient Buildings).

So it came as a surprise to many that in 2010 Ian, along with his wife Simone, chose to swap their brick and flint 17th-century listed farmhouse in the Chilterns for an undistinguished bungalow 20 miles away, which they would later demolish and replace with a new low-carbon four bedroom property.

Although he was brought up in the building trade and has restored and rebuilt a number of old houses, this was Ian’s first self build. The move to Abingdon in Oxfordshire also enabled him to live closer to where his (then) company Lime Technology – which he founded in 2002 – was based. Ian is dedicated to the development of lime-based building products and sustainable building solutions, and transferring these materials from the world of historic buildings to the new-build sector, so the obvious next move was to apply this method to create his own energy-efficient home. The result is a demonstration of the effectiveness of building in hemp/lime panels.

The Process
The process of building in hemp/lime has been in use in this country for about 12 years, but very few houses have been constructed so far using this material in panel form. Ian’s aim for several years has been to prove the effectiveness of hemp/lime in the self-build sector.

“Historically the material has been cast on site,” Ian explains, “but this is slow and the unpredictable British climate causes constant drying problems. I spent several years developing a process whereby the material could be cast into panels purpose-built to architects’ designs and then assembled on site.”

These panels proved effective during the construction process, with the entire build taking just seven months. During the build, the couple moved into a caravan on site where Simone, who project managed the build, could be on hand at all times to oversee proceedings while Ian assisted with the build along with a two-man building team of Paul McKenna and Dave Ledger, who erected all the panels in just two days. 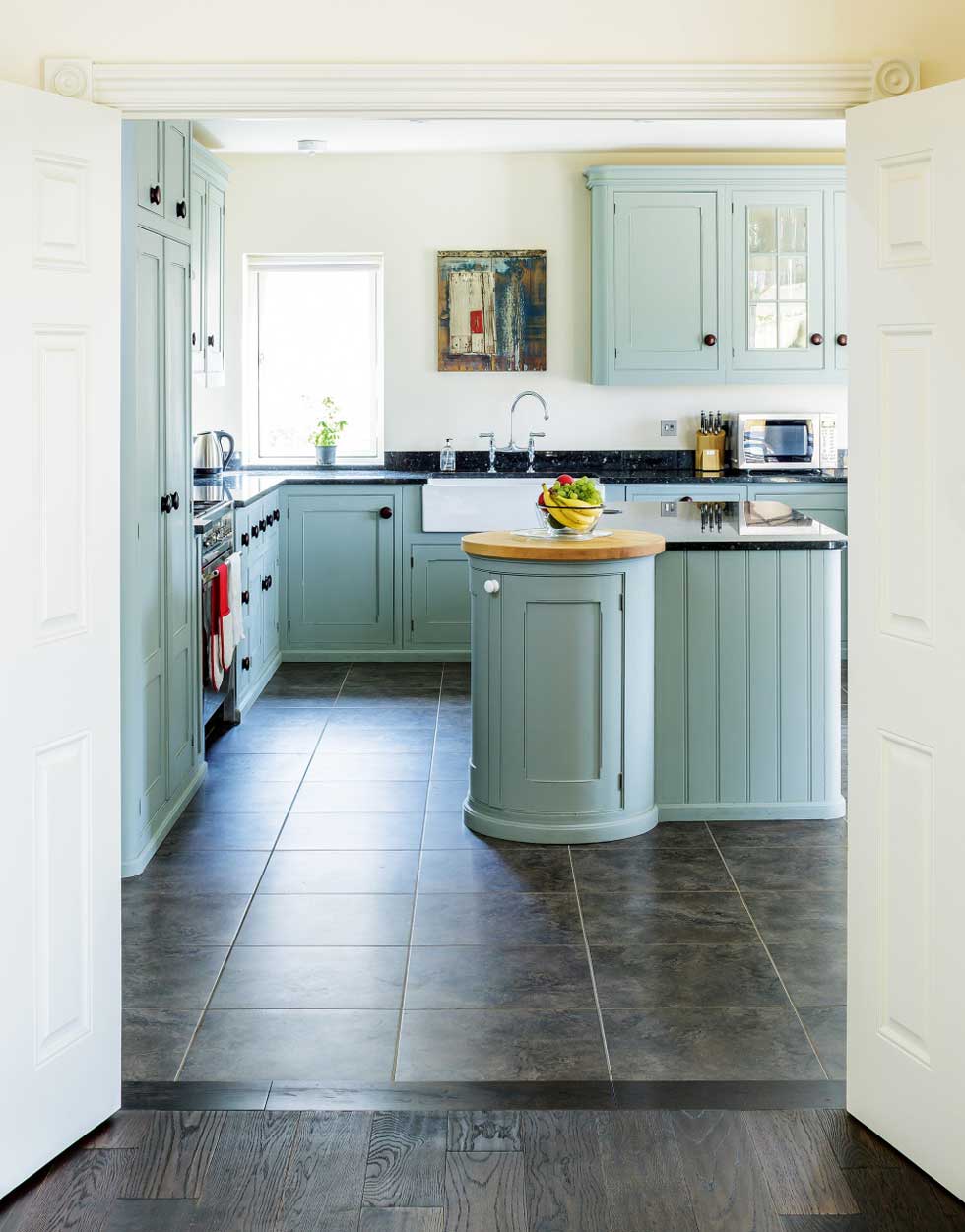 Offering a splash of colour to the neutral interiors, the bespoke shaker-style kitchen with emerald pearl granite worktops includes a centre island suitable for gathering round, as well as providing additional workspace. The ceramic floor tiles are from British Ceramic Tiles and have been laid above underfloor heating which keeps this surface warm underfoot

The Pritchetts were conscious of achieving a low-carbon home and took measures to ensure any technologies brought into the house would work hard to reduce running costs. Thanks to its hemp/lime construction – which has created a home of low U values – together with eco solutions, the entire house achieves a heat demand of about 2.5kW — approximately the output of a high-powered hair dryer.

“On average we have been running at £1.25 a day,” says Ian. “If we assume 150 heating days per year, then our predicted electricity bill will be £187.50. However the first winter was mild, so the £250 a year figure I have been working on should be about right.”

Effective Heating
The low-energy home is effectively heated using electricity supplied by underfloor heating (upstairs only the bathrooms are heated). In fact, the energy rating is quite close to Passivhaus performance — the heat demand is no more than 10W/m² during peak times. The house is also continually monitored, but Ian is quietly confident that they have hit the Passivhaus requirement. The combination of the 300mm hemp/lime and hemp-fibre walls gives a U value of 0.13 — about twice as good as the standard modern home.

The hemp-fibre insulation in the roof betters this, giving a U value rating of 0.1, and the addition of triple-glazed windows and a mechanical ventilation heat recovery system also helps improve performance. “What is really nice about this house is that the vapour-permeable walls buffer humidity and help create a really comfortable environment,” says Simone. 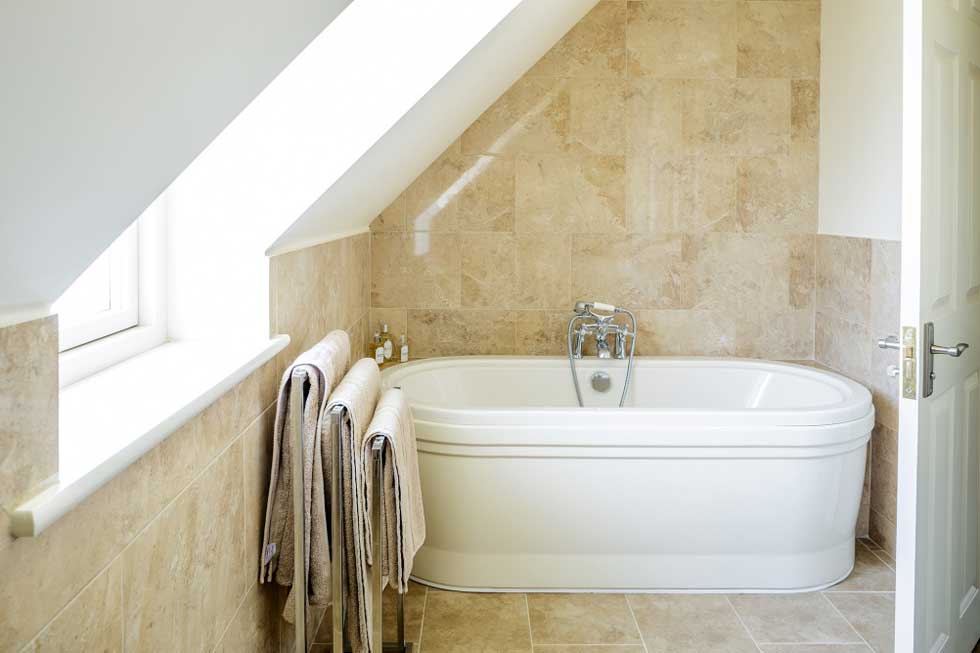 Despite their strict budget, Ian and Simone have managed to finish their home with beautiful fixtures — the family bathroom is case in point with neutral floor and wall tiles from British Ceramic Tiles and Villeroy & Boch sanitaryware

After their attempts to build a more exciting design fell foul of the planners, and not wishing to spend time going to appeal, Ian and Simone chose to stick with the design that came with the plot.

“We threw out the idea of switching to a more imaginative design and adjusted the specification to suit the £200,000 budget,” explains Ian, who called on a few favours from the past to keep costs down. “We were keen above all to prove the house could be built rapidly and effectively for the best value. There is plenty of time to move on to a more exciting design at a later stage, and the point with this house was to show that these lime-based materials, with their breathing walls and tremendous insulation qualities, point the way for future house construction in both the private and the public sectors, at a price that is achievable for everyone.”

While it is true that Ian could buy the main hemp/lime panels at a highly discounted price because of his connection with Lime Technology, Simone had to go to market for most of the other materials.

“We chose everything – even the triple-glazed windows – on the basis of value for money,” says Ian. “Because of the way we organised the build there were no layers of profit in the overall cost. In most self builds the cost escalates because everyone has a hand in the till at every level.” 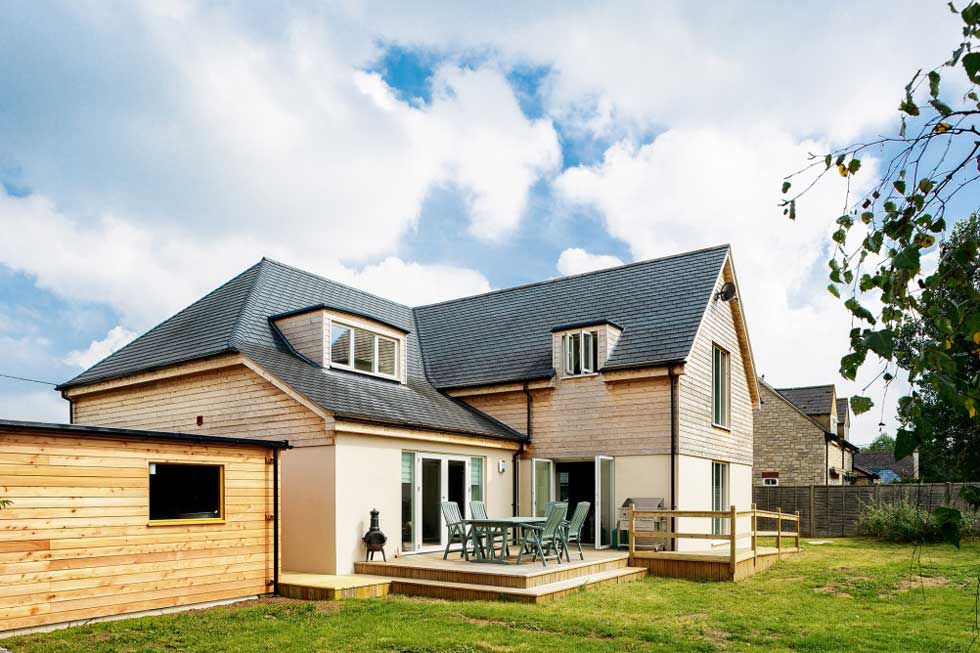 The L-shaped floorplan, prominent gable and dormer windows allow the rear elevation to adopt a modern cottage style, while glazed double doors from Rationel open the internal spaces out onto a raised deck for outdoor entertaining, leading down to the garden. The recycled rubber Eco Slate roof provides a contrast to the render and cedar-clad façade

The end result is a 250m² four-bed home which has been finished in render to the ground floor with cedar cladding above, adding warmth to the contemporary front elevation. To the rear, dormer windows and a strong gable offer a cottage-style feel to the home, with full-height glazed windows from Rationel to one aspect and two sets of glazed double doors on the ground floor allowing the living room and kitchen/diner to open out onto a raised decking area for outdoor dining. The recycled rubber Eco Slate roof covering completes the look, and was chosen for its benefits of recycled materials and zero breakages.

Bitten by the building bug, Ian has now left Lime Technology and founded, with a partner, a company called Greencore Construction. The aim is not so much to build complete houses, as to assist self builders and others with thermal modelling and calculations, and to provide self builders with what he calls: “The second of the three stages of a building project.”

The first stage, he explains, concerns everything to do with the foundations, and the third stage is the fit-out. “We aim to help self-builders with the superstructure — the external walls and the roof envelope,” Ian explains. “Unlike stages one and three, this is the area where traditionally the UK building industry has a bad record. Three men erected all the panels in this house in two days, and it is amazingly energy efficient and nice to live in. Surely this is the way the self build market should move in the future?”