The roof is the key focal point of any home’s exterior and as such, it’s vital that you get the design right. And it’s not just about choosing between a traditional pitched, flat or curved design, but also considering the structural system used, how it’s insulated and whether you want to use the roof space as living space.

One of the key factors in roof design – and how to make the loft space habitable – is the angle (pitch) of the roof.

Many conventional house forms have a roof pitch of around 35°, but this is too low to make good use of the loft space in all but the widest footprints. 45° is a far better bet for loft living, but 45° brings its own problems as it can make the house as a whole look top-heavy, or roof dominated. You must decide here on a balance between overall look and practicality.

Other options include using the one-and-a-half-storey effect, where only the top half of the upper storey is built into the roof, or opting for a mansard roof, where the pitch of the roof changes abruptly at midpoint.

Not everyone wants a conventional pitched roof. Flat roofing used to be the province of home extensions, but many Modernist designs incorporate flat roofs, often used with decking as garden areas.

There is nothing particularly taxing about building flat roofs except to note that in reality they are never flat but rather built with a minimal fall so that water does not pool. The key to their success is the waterproofing detail and in recent years, the development of single-ply membranes has made this less of a problem.

Curved roofs are a little different. They are something of a post-Modernist design statement, usually clad in an expensive metal, such as zinc. The curves are usually constructed from specially made timber composite beams, known as glulams.

If you opt for leaving the loft space empty, you can simply roll out insulation above the ceiling (though care has to be taken to ventilate the unheated loft space if condensation problems are to be avoided).

If you don’t intend to use your loft as a living space in the near future, then simply roll out insulation

But if you want to use the loft as living space, you have to insulate directly under the sloping roof. The problem here is that the amount of insulation required is deeper than the rafters or trusses.

Various techniques have evolved to overcome this problem. Extra insulation can be added to the underside, but this reduces headroom. Alternatively, all the insulation can be placed above the rafters: the so-called warm roof.

Another approach is to do away with rafters and use insulated panels laid across a series of beams, in the way that modern commercial units are built. This works well on simple roof shapes, but may not be cost-effective if the roof is made up of many different planes.

You also have to consider how best to build the roof. The traditional way of building a pitched roof is to make it on site, with carpenters fixing wall plates and ridge plates and then cutting rafters to length. It’s skillful and exacting work, especially when there are complex additions like hips, dormers or side roof extensions. Care also has to be taken to ensure that the structure of the roof is adequate, and that it won’t sag or move, or lift off in high winds.

In the past 50 years, much of the skill of roof carpentry has been replaced by the use of prefabricated roof trusses, which can be lifted or craned into place relatively quickly and easily.

Looking at these diagrams, it’s easy to see the huge difference the positions of the rafters makes.

The standard fink roof truss – which has been fitted into millions of houses – is not readily adaptable for loft living, especially as most fink truss roofs are 35° pitch or less, and so in recent years, builders have been tending to use much beefier attic trusses which provide an open loft.

However, much of the cost advantage of using trusses vanishes when the trusses themselves get larger and more complex, so traditional roof carpentry is still widely used.

In the attic truss roof, a high collar beam and two struts make a wide, open expanse, which will be easy to convert into liveable space. Alternatively, while possible, a fink truss roof, with its awkwardly positioned web posts, is not easy to turn into usable space. If it is a possibility that you will require more room in future, you should seriously consider opting for an attic truss roof. 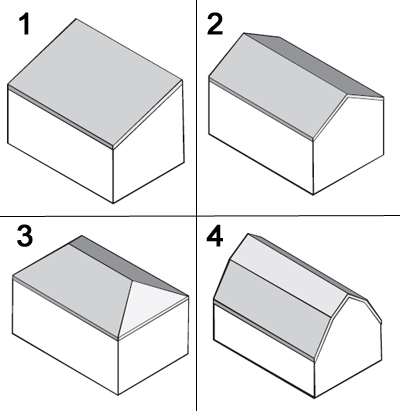 If you opt to use the roof space as living space, there are a number of implications that you need to consider:

If the roof storey is more than 4.5m above ground level (which it will be if it forms a third storey), then you have to design an enclosed route down to the front door, and all the doors opening onto this route have to be fire doors. You cannot have an open plan staircase rising out of the kitchen or living room.

You broadly have two options. Fit rooflights into the slope of the roof (simple and cheap) or build out from the roof, as you would with a dormer window. It rather depends on how big the roof space is and what you want to use it for.

If you don’t actually need the roof space, you can opt to build the open space and leave it unfinished. Then in future, should you want more space, you have a relatively simple fitting-out process to undertake. Note that if you do this, you should still pay close attention both fire-proofing the access and determining how any staircase would run.