Relationships can strain under the weight of a self build, but for Sandy Garfield and Melvin Starling, building their new home together had been part of the plan from the beginning. After a trial period renting together, the pair sold their individual London flats and set about searching for suitable properties to demolish and rebuild.

Sandy’s career as a freelance set designer meant that she needed to retain access to London, but Melvin, recently retired from his career as an architect, was keen to move out of the city.

The compromise was to buy a tired 1930s house in a Surrey village — close enough for Sandy, and far enough away for Melvin. The property, which the pair knew they would knock down, sat on a half-acre plot that was level, faced south-west and had a rear garden that wasn’t overlooked — everything they were both looking for. 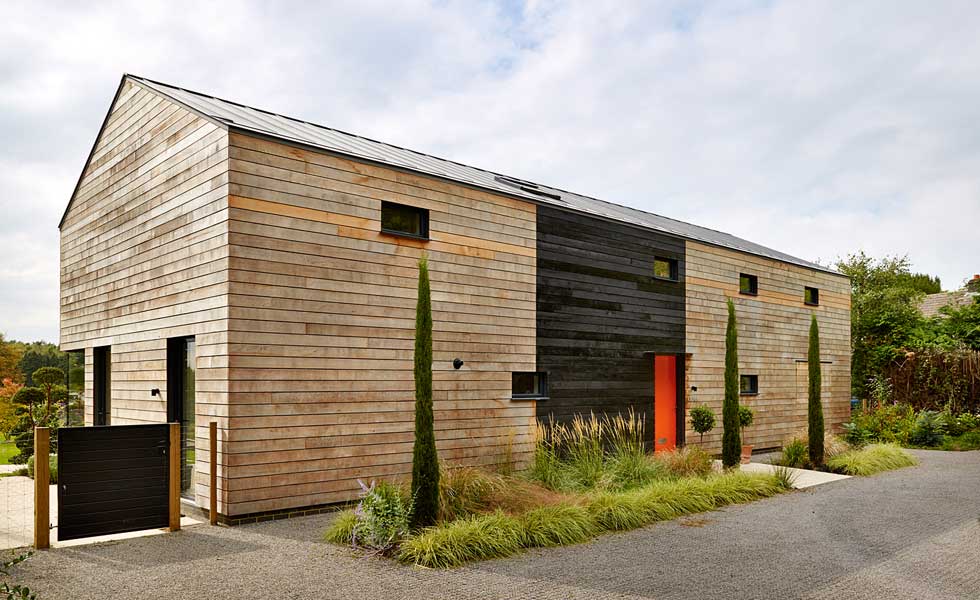 Externally the building has a clean and uncluttered appearance

Unfortunately, the purchase was far from stress free. And even on the day the pair were due to move in, the incumbents had not moved out, the front garden was buried under four feet worth of rubbish and the house hadn’t been emptied. This took another week to resolve, meaning that though their offer had been accepted in October 2014, it wasn’t until April 2015 that they were able to move in.

“We lived in the old property for about nine months while we drew up the designs, obtained planning permission, appointed consultants and negotiated the contract with a local builder specialising in one-off houses,” says Melvin. 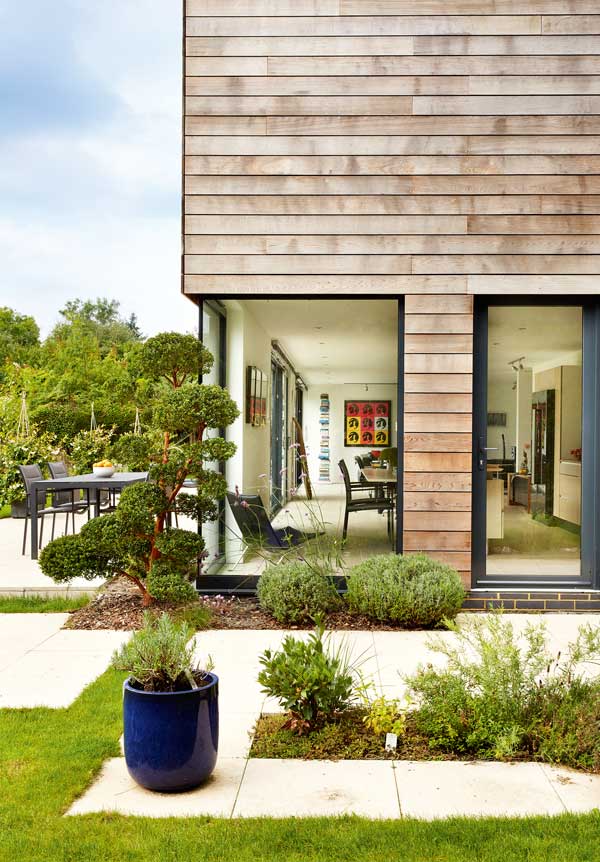 The walls are clad with untreated cedar boards, and this corner window makes the most of garden views

The couple employed a planning consultant to deal with policy issues and submit and manage the application. The plot is in the greenbelt and the local authority set an arbitrary limit on the size of the new building — this was based on the volume of the house pre-1968 plus 5%. Melvin, who designed the house, focused on maximising the built volume while staying on budget.

(More: All You Need to Know about Building in the Countryside)

The house was also designed to be energy efficient. Melvin’s design orientated the utility spaces to the north-east elevation, which faces the road, and features small windows to minimise heat loss and maximise privacy. All of the main habitable spaces face the garden, enjoy views to the south-west and benefit from double-glazed windows or sliding doors. 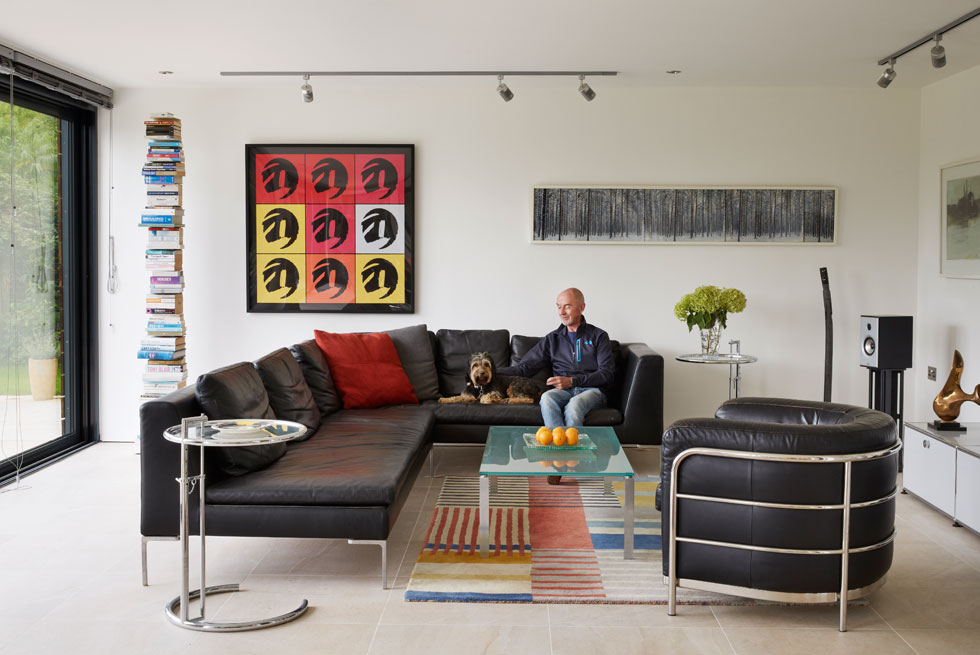 Thanks to this sympathetic and efficient design, the planning process turned out to be a smooth experience, taking six months to reach approval status. The pair wanted a main contractor to run the demolition and build, and Sandy found their man, David Jacques, in the bar of Dorking Rugby Club.

A budget was set and a two-stage tender process established with David, with the costs for the demolition, groundworks and services, timber frame and external envelope agreed for the first stage.

Melvin and Sandy moved out into rented accommodation as work on the first stage began in January 2016, with the second stage of the contract negotiated during the first stage works, to include all the internal works, such as the joinery, electrics, plumbing and decoration. This approach works well if a realistic budget is established, a good working relationship maintained, if the architect is confident of designing to a budget and changes are kept to a minimum — all of which occurred on this build. 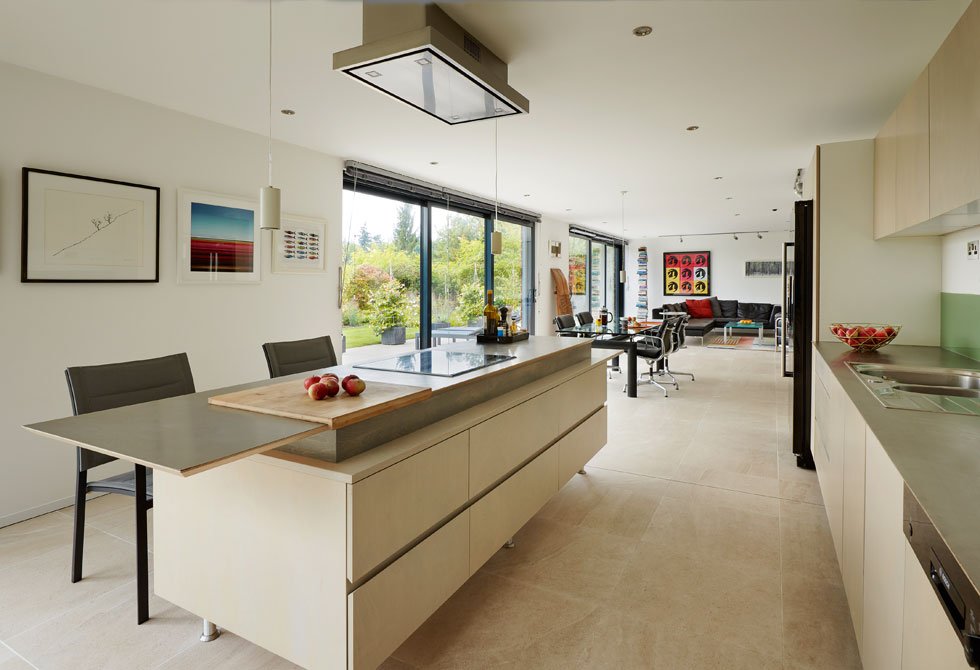 The build was completed well within the year thanks to its timber frame construction, with the couple moving into Koya (the house is named after a Japanese word for shed) by the end of October 2016.

Externally the building has a clean and uncluttered appearance. The walls are clad with untreated cedar boards, providing an open-jointed rainscreen cladding system. This allows the stainless steel rainwater goods and the extract grilles to be terminated in the ventilated cavity, keeping the elevations clear of visual distractions. The gutters are also concealed and there are no overhanging eaves. 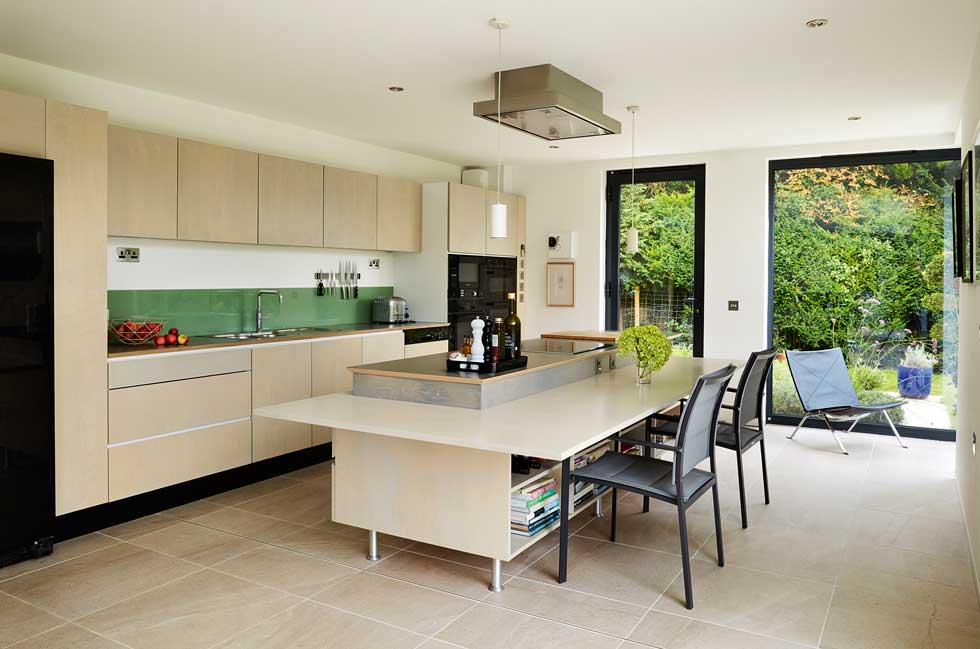 The kitchen was fitted by local company N&P Joinery

The choices also adhere to Melvin’s desire for a low-maintenance home: with the untreated cedar boards, aluminium doors and windows, and zinc roof providing a combination of long lifespans and low to no upkeep.

Koya’s energy-efficient credentials are evident too. There is 200mm of insulation in the walls and 250mm of insulation to the zinc roof, and the house has been designed to have minimal air leakage rates.

The home’s ‘A’ EPC rating is both rare (fewer than 1% of UK homes achieve this) and testament to Melvin’s design and David’s construction skills and attention to detail on site. 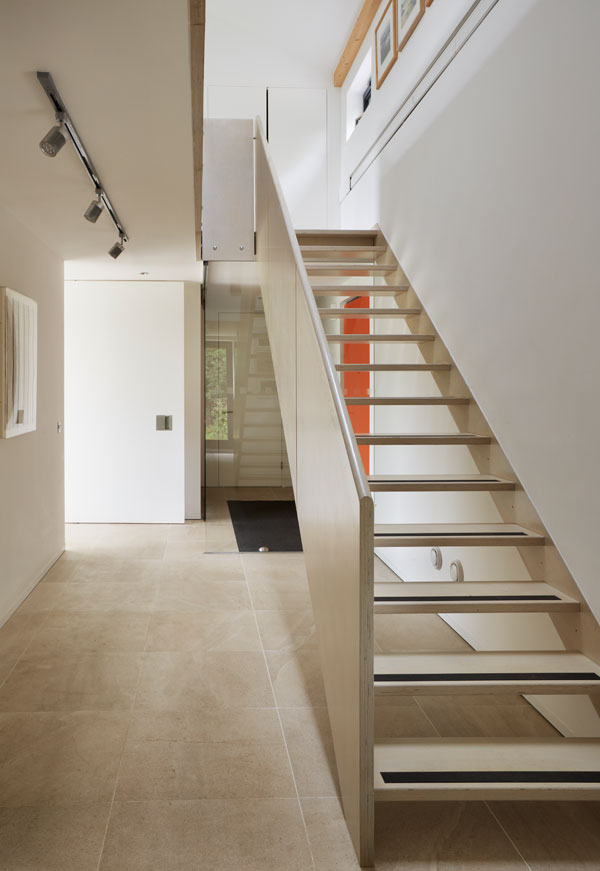 Inside, an underfloor heating system heats the downstairs, while hot water-fed recessed skirting radiators provide warmth to the first floor.

Last, but not least, Melvin and Sandy worked hard to ensure their garden does justice to the new home. Since moving in they have re-landscaped the rear garden including digging out a reinforced concrete path and a mature flower bed, moving 30 tonnes of topsoil by wheelbarrow from the front to the back garden, laying a new section of lawn and putting in a garden pond, seven planted beds, all edged with railway sleepers, and planting 11 specimen trees. 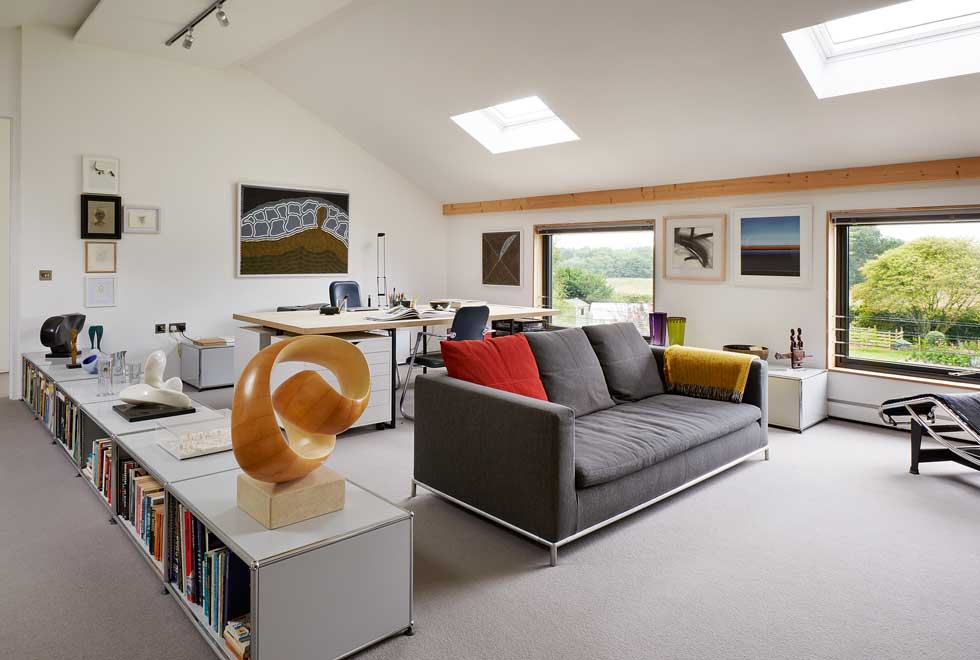 The studio area on the first floor feels more informal than the main living room, and features rooflights to bring in light from above

The couple couldn’t be happier with the final product, and have received effusive praise from those who worked on the project. “The house works very well for all of us, including Ralph the dog,” concludes Sandy. “It’s perfect.” 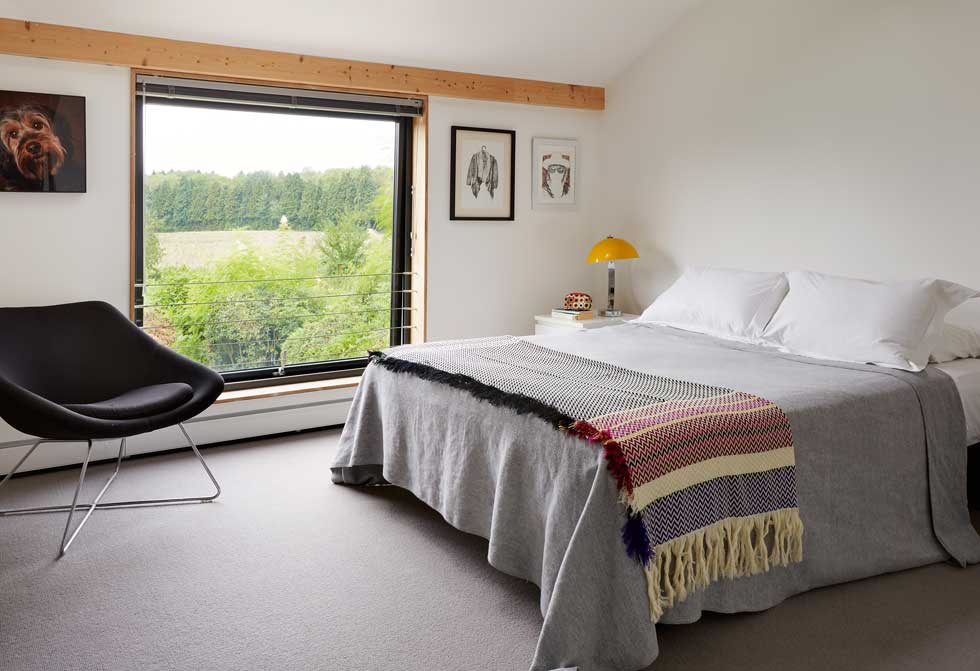 Melvin and Sandy decided on matching en suite bedrooms on the top floor, both making the most of the enviable views, that bookend the large studio space in the centre of the first floor plan 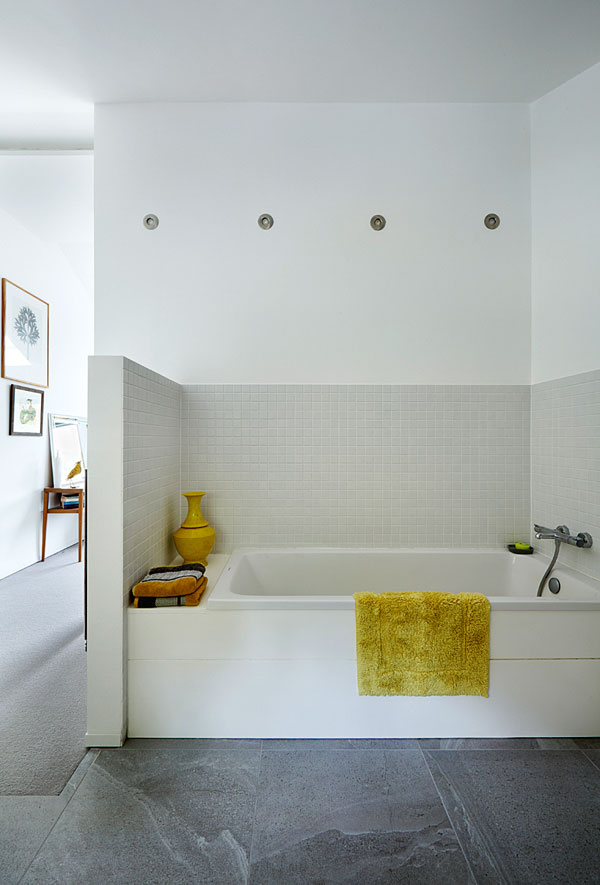