Louisa and Simon Cohn’s new striking, contemporary home on an awkward site has received numerous architectural and design awards since its completion in 2014.

“We were living in my house – a new three bedroom terrace with little character – in Oxford when we saw the plot,” says Louisa. “We were both keen on the idea of building from scratch, and Simon had built before. When we heard that the sale on this plot had fallen through, we just jumped in there.”

The plot came with planning permission for a three-bed chalet bungalow — but Louisa and Simon were keen to make some changes to increase the amount of liveable space and introduce their own design ideas.

The Design and Planning Permission

“We had been keeping a file of what we liked which we just handed over to the architect and then we worked together to achieve a design we were happy with,” says Louisa. The architect in question was Adrian James, who is local to the Oxfordshire area, and whose designs had previously caught Louisa and Simon’s attention.

Restrictions on the site, which falls within the green belt, meant that the roof height of the new house could be no higher than the neighbouring house, plus the new footprint could be no larger than the run-down bungalow that the new house was to replace. Despite the restrictions, planning approval for their revised plans were approved first time with no amendments — something that was no doubt helped by the number of renewables that have been included in the new house. “The simple cuboid form meant the house could go right up to the allowable height with occupied space. None of the height was wasted on a pitched roof.” 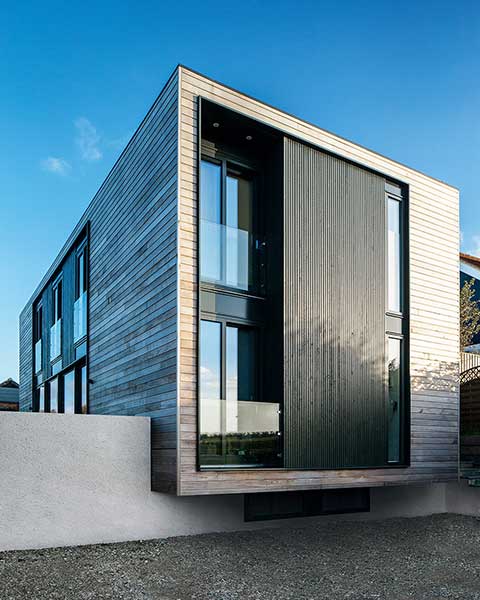 The front elevation of the house is cantilevered out over the wall. Composite timber and aluminium windows were chosen and have been painted dark green

The plot is heavily sloping and this, along with the requirement for a basement, meant that some hefty ground excavation had to take place before the build could begin. “Excavation vehicles were unable to access the area to be dug out because of an awkwardly positioned overhead power line and the fact that the new house sits higher than the driveway, ” says Louisa. “The power line had to be submerged into the ground, which meant that the power in the village had to be off for a whole day.”

Once the basement had been dug out and tanked, a flat-packed SIP (structural insulated panel) system was used to construct the basic form of the house, with the couple opting for an airtight membrane within the SIP envelope to increase the energy efficiency of the finished building. 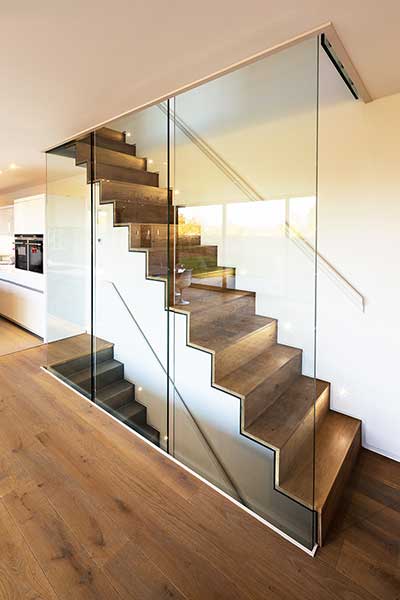 The folded plate staircase leads up to the first floor and down to the basement which houses a guest suite/home cinema, utility and plant room

The house has some other impressive eco credentials, including a mechanical ventilation heat recovery system, an air-source heat pump and an Ecocent hot water system. “We love the way the house works,” says Louisa. “We don’t have gas here, so everything is electric, but our bills are still no higher than when we lived in the three bedroom terraced house — and grants really helped with the painful upfront costs of some of the eco-friendly features.” 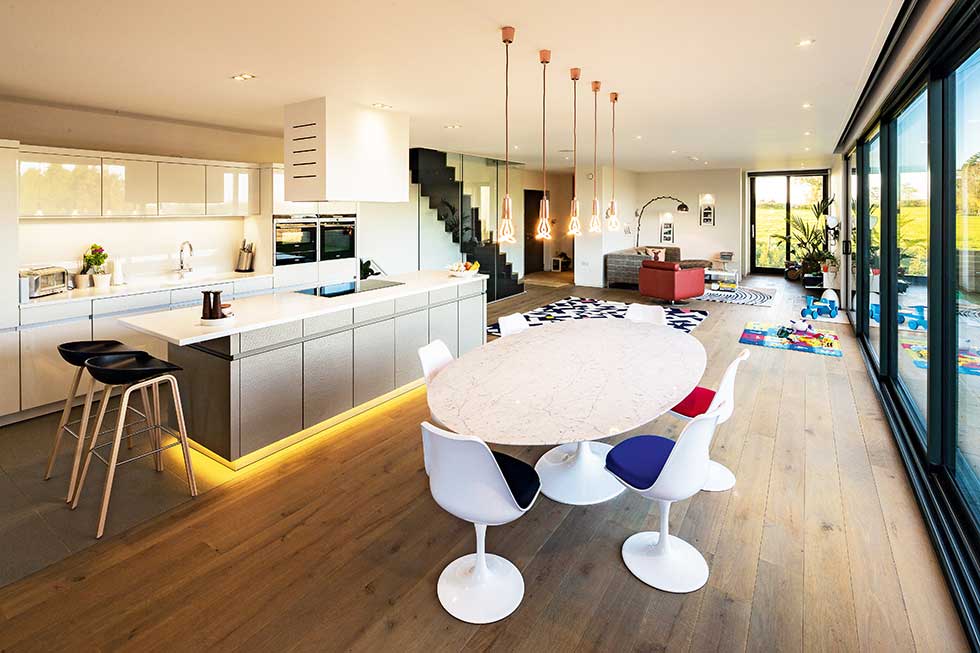 The ground floor space is open plan, with the exception of a home office, WC and larder. In the kitchen, a palette of grey and white enhances the feeling of light even further in this area, while an engineered oak flooring has been used throughout 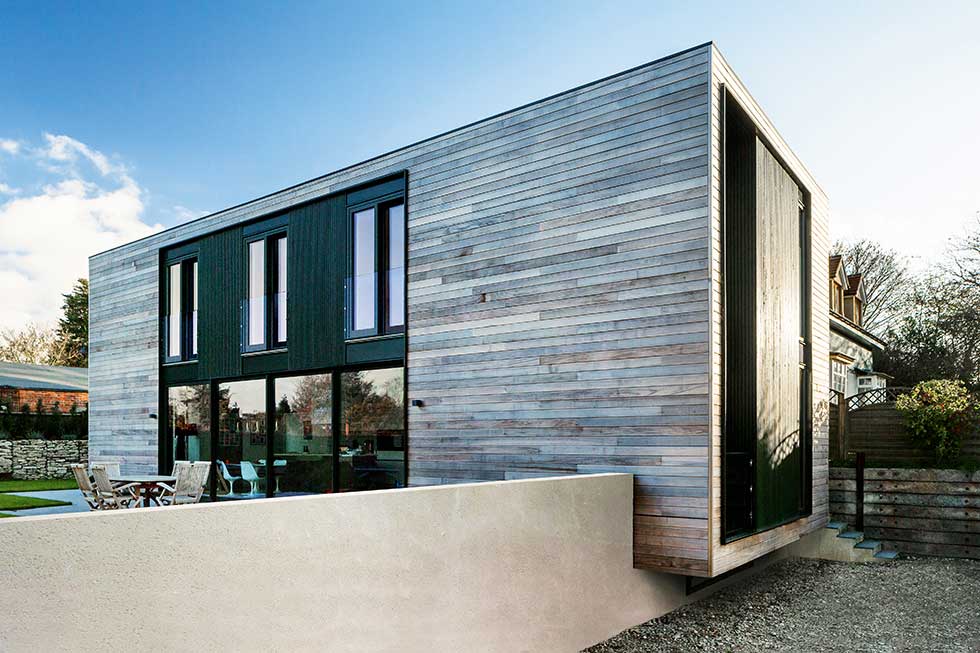 The cedar cladding from Vincent Timber is weathering beautifully, while the first floor sliding doors mirror the openings below. Materials were chosen for their simplicity as well as their ability to merge with the surrounding countryside 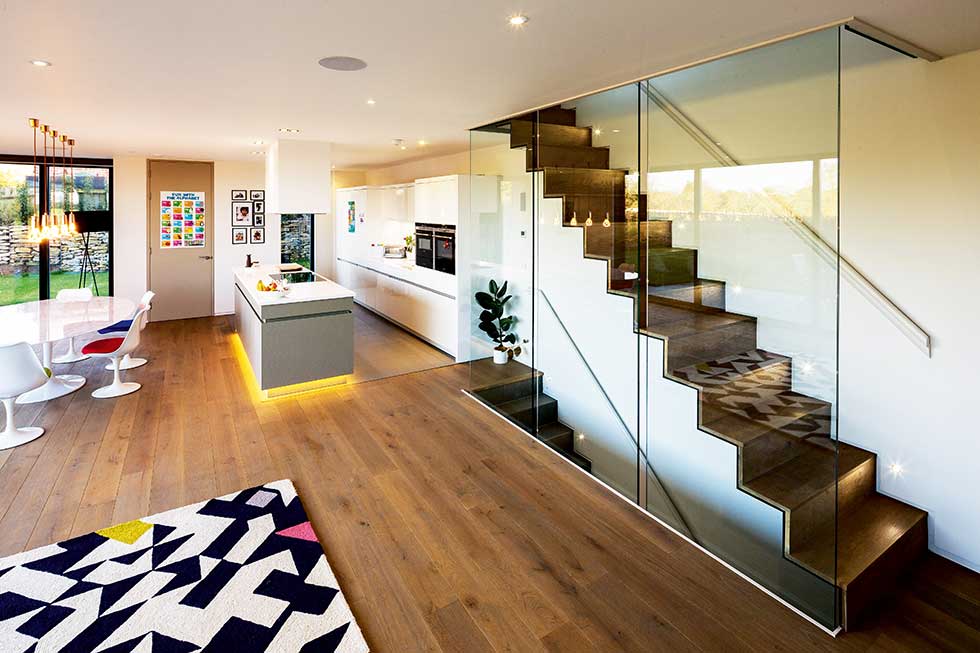 Internally, the huge amounts of glazing flood the spaces with light