According to project architect Alastair MacIntyre, the “sheer geometries” of his latest project – a remarkable home that recently emerged on a hillside on the eastern edge of Gare Loch in Argyll and Bute – meant that every detail had to be just right.

These sheer geometries, however, don’t even begin to describe the soaring cantilevered ‘viewing pod’, projecting out towards the sea and Arrochar Alps mountain range beyond.

What’s even more remarkable than its formal audaciousness and ambition is that the house actually started life as a 1970s red brick two storey home, which on first view reminded owners Alan and Linda of a community centre.

“We could see beyond the red brick,” admits Linda, who like Alan was brought up in Scotland, but over the past 30 years have lived in locations ranging from Cheshire to Tokyo, Connecticut and London, due to Alan’s work.

“We’ve always thought of Scotland as home and have family here, so we spent our summers travelling around looking for potential locations for our permanent home.”

When the red brick house went up for sale, the couple fortuitously met the son of the previous owner, whose childhood friend had spent a lot of time in the house as a teenager and was working in nearby Glasgow as an architect.

Following the purchase of the house and its surrounding three acres, that childhood friend, Alastair MacIntyre, was invited by the couple to revisit and reimagine the house according to their vision for a light-filled, view-soaked house. 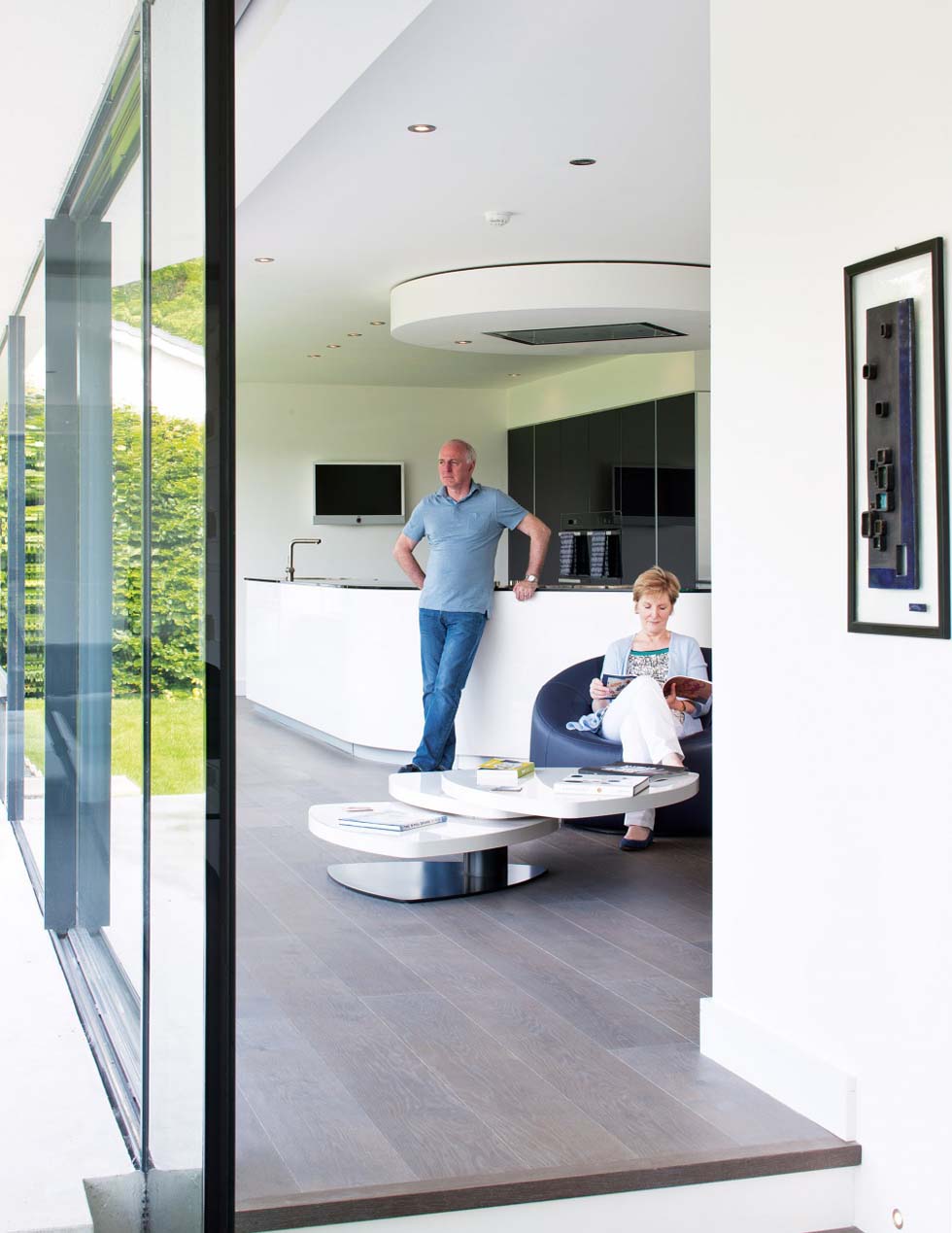 Floor-to-ceiling Sky-Frame glazing on the lower level of the home opens the interiors up to the stunning backdrop of Gare Loch and Arrochar Alps beyond. The glass also effectively promotes passive solar gain and contributes to warming the house throughout the year

“We had strong ideas about the design elements,” explains Alan of his visions for the new home. “We collected photos of features that we liked and wrote a design narrative beside these, saying ‘we like this because’.”

The couple’s ideas were also influenced by their travels abroad, as Linda explains: “We wanted lots of light and textures — a modern house with a Japanese influence in its simplicity.”

The design response, according to architect Alastair MacIntyre was radical. “The original house had a rigorous design profile in its own right — it was essentially two houses linked by a staircase. Having known the house, I knew its shortcomings. I knew we were looking for a slim-line form (which the original house had), clean lines and views towards the water from the main windows.

“The staircase was a weak link in the original house,” continues Alastair, “so there was a great opportunity to open that up and create a fantastic entertainment and gallery space beyond the staircase which overlaps like a two storey link with a view. It is a signature feature of the house now, with a cinematic view of the sea and hills that you see as soon as you step inside the entrance door. Then other views open up as you come down the stairs.”

Essentially, Alastair has reimagined the house as: “Part 1960s Californian cantilevered concrete and glass John Lautner house; part The Man Who Fell to Earth, in the way that Alan travels round the globe yet he’s fallen to earth on this particular spot.” 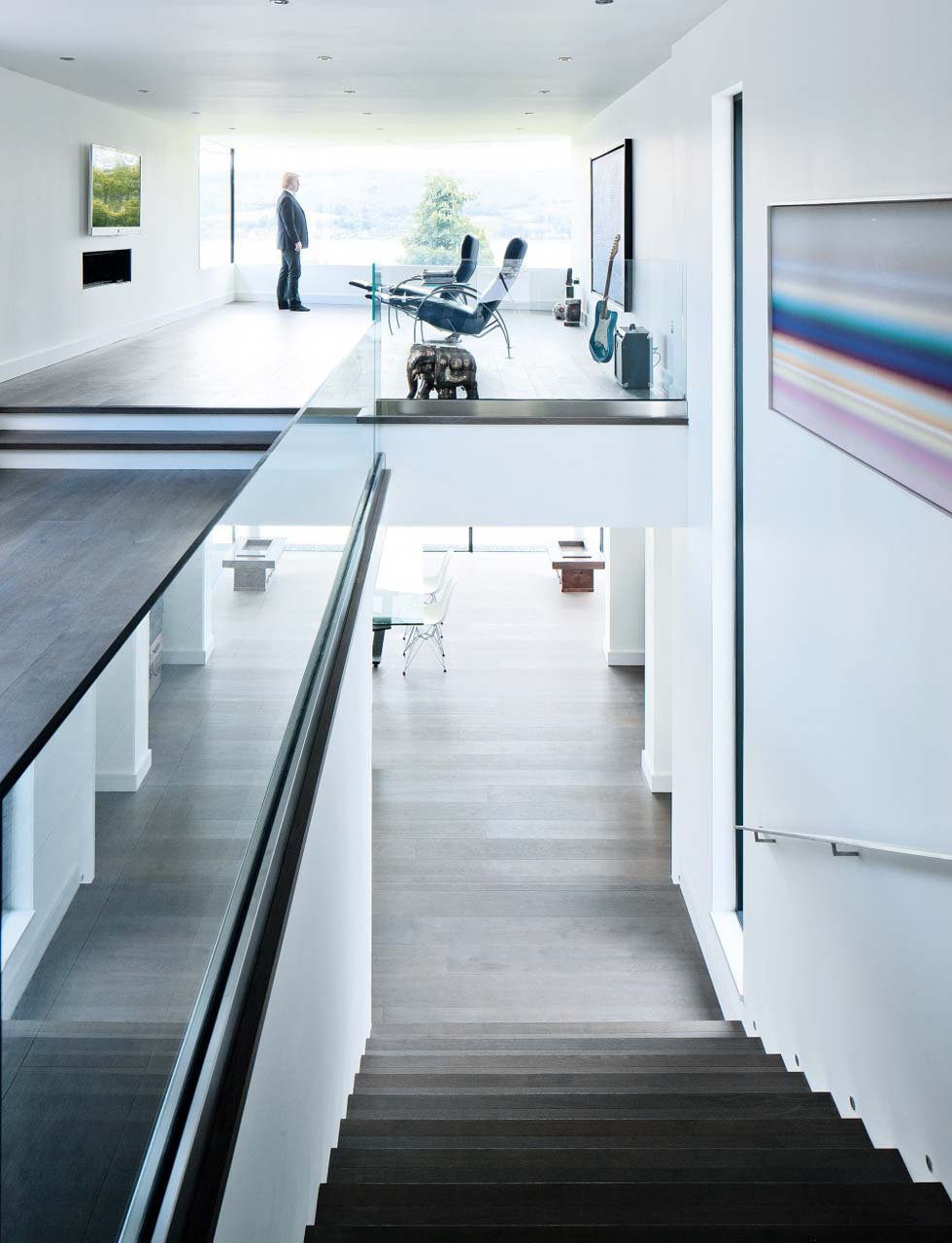 Thanks to the home’s clever, reimagined design, a new walkway from the entrance hall leads to the new cantilevered extension which provides a gallery to enjoy the views. This introduction also allows visitors to glimpse the views upon entry

One of the house’s main motifs is the unique concrete-effect rainscreen panels which were inspired by Frank Lloyd Wright’s Los Angeles villas. These panels, which were designed to give some relief to the plainer exterior walls, were arrived at only after no small amount of material experimentation. “Concrete would have been too heavy so we had to devise a rainscreen that looked like concrete but was much lighter,” says Alastair. “This is a technology by Capvond which we had not used before, with its simulated concrete panels manufactured using a ‘reinforced cast resin system’.”

Innovation is writ large in this element of the home, which is a striking addition to the mature gardens that surround it. However, on a more prosaic level the building effectively occupies the same footprint as the existing house, which is why there was little in the way of planning issues.

“The original carcass was there but the way it was going to look was entirely different,” admits Alastair. “The only space added is the area of the new viewing pod.” The original foundations were essentially retained but altered on the lower section of the lounge as this drops down a level. Underfloor heating has been installed here, while the upper section has been largely retained but relined and reinsulated, and the roof replaced with a single ply membrane. 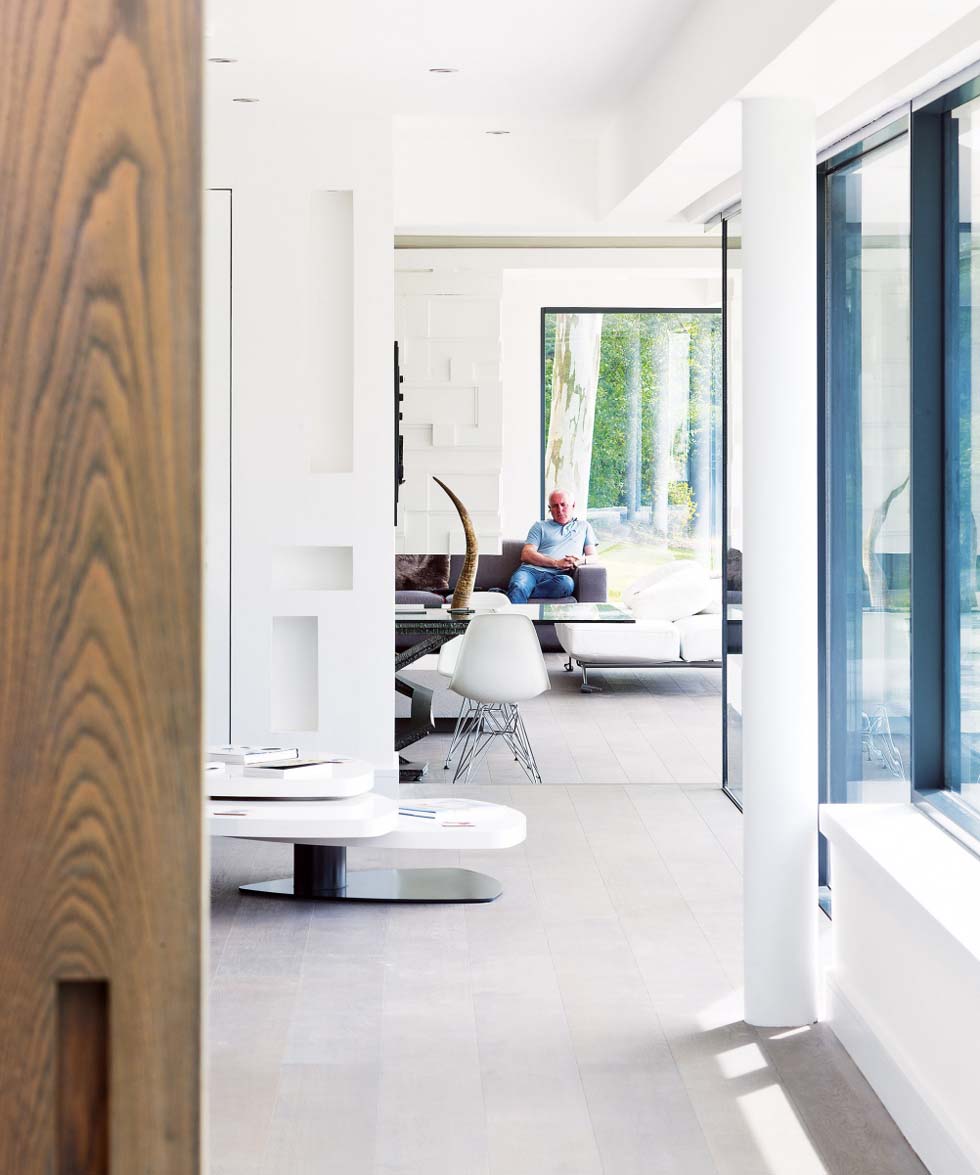 In keeping with the exterior cladding materials, the home’s interior adopts a similarly neutral palette of white and grey. The large open plan living/dining space (shown here and left) is zoned by a central feature fireplace clad in the same concrete-effect panels as those used on the exterior, while a Sky-Frame ‘wall’ of glazing allows the views to act as the artwork for the home. The washed oak wide board flooring is from Parkwood

The private spaces, such as the en suite bedrooms, have been arranged along the more private entrance wall on the upper level — which appears single storey from the front. “The bedrooms are inspired by living in Japan, where everything is very low and simple,” says Linda. The amount of glazing in the bedrooms has been reduced to afford greater privacy too.

In stark contrast, the sea-facing façade of the main living areas features a Sky-Frame ‘wall’ of glazing set atop a white concrete perimeter walkway. “Not only does the walkway create an intermediate space between the garden and the house, it also reflects the light back into the house,” explains Alastair. “The house benefits from reflected light from the loch, and also sunlight hits the loch and bounces up again, almost like a double-whammy effect. As a result the ceilings in the house are never dark.”

Another exterior device that has been continued in the living area is the central fireplace, which features an internal chimney constructed of the same Capvond concrete-effect panels that appear on the exterior. 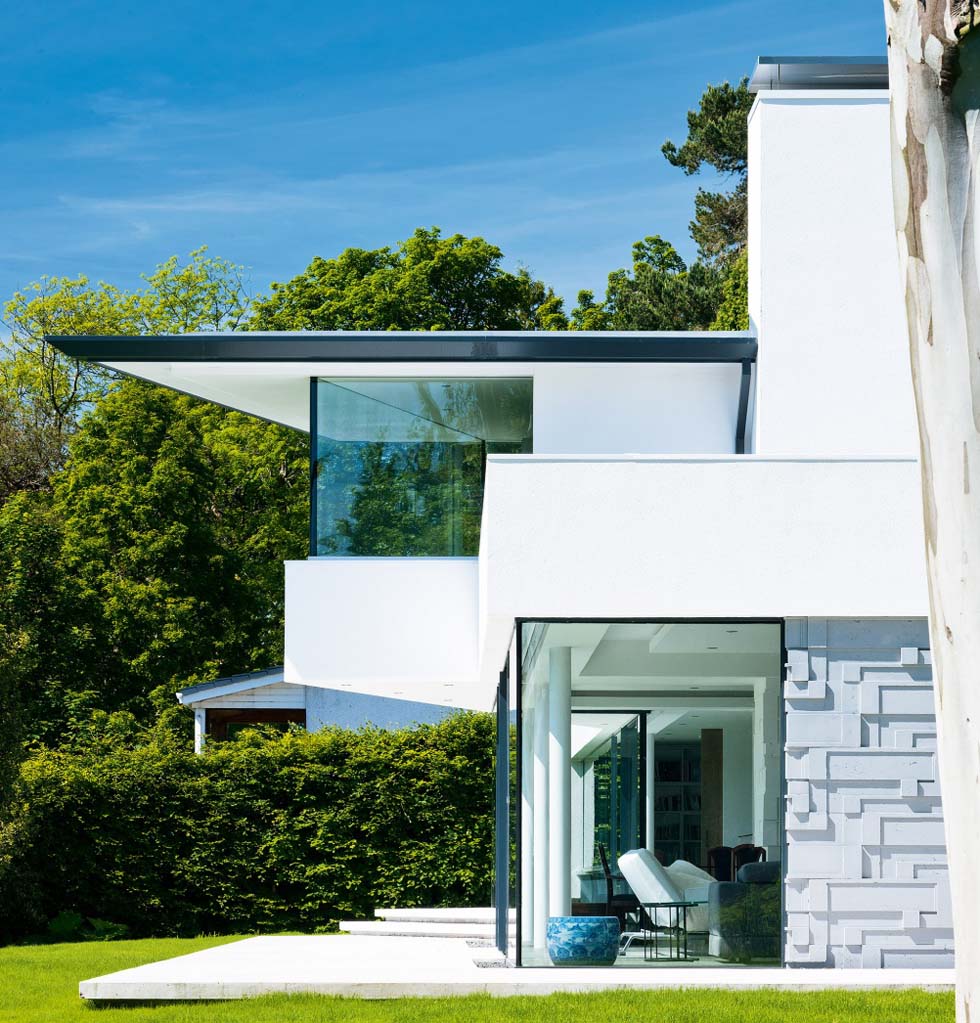 While the reconfigured home effectively occupies the same footprint, the new cantilevered extension projects out to create an additional gallery and provides architectural interest to the rear façade, where contrasting building materials have been used to great effect

Indeed, the detailing that project architect Alastair was keen to achieve has been realised throughout the house with a range of high-spec features, including bespoke chestnut doors that feature an abstract illustration of the home’s floorplan in wood, created by the builder Allan Leckie. The Italian curvilinear Pedini kitchen and circular living area snug also adds a contrasting softness to the building’s ‘sheer geometries’.

The couple, who were living in their London home during most of the build, also ensured that high-spec details were achieved by choosing not to scrimp on key features, such as the single-paned glass in the viewing pod, which could have been made up of two or three much cheaper panes. “We have an open mind and enjoy the same aesthetic approach as Alastair. He’s been a real driver behind the design, so we were keen to support his ideas. It was great having someone who knew the previous owners and house, and in fact, the core design hasn’t really changed since we first accepted the brief and it went into planning,” says Alan.

“The challenge in a house like this is that you cannot be careless in the detailing,” concludes Alastair. “It’s a sheer and precise concept that you have to stick to rigorously and think about it all the way through.”