The very best architectural gems are site specific, responding to the land upon which they sit and to the surrounding environment which they serve to enhance. This new contemporary home in urban Surrey, which was awarded the RIBA South East Award in 2014, is case in point — designed by SOUP Architects to meet a very particular set of challenges.

The plot of land began life as an unusually large garden to an Edwardian property, belonging to the clients’ parents. “The enlightened clients spotted the potential here and approached us with a brief for a contemporary five-bed home,” says architect Patrick Walls, co-founder and director of SOUP Architects, with whom the clients were familiar after the practice designed a new home for their friends. Carving out a building plot would bring the existing garden in line with those of neighbouring properties, with a shared driveway providing access to the landlocked plot. 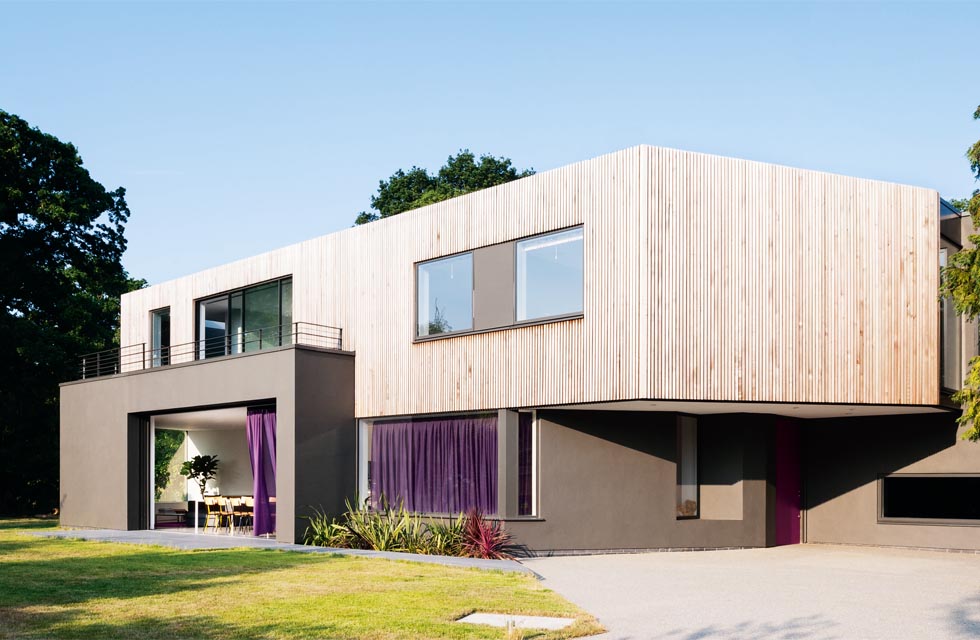 Bordered on all sides by surrounding houses, including a new three storey development of flats to the east, overlooking was an issue SOUP Architects needed to address from the outset. Another was preserving both protected by TPOs (Tree Preservation Orders) – and the views from the existing house.

“The site influenced the design and orientation,” explains Patrick. “Tucking the new house into a triangular corner of the plot was an obvious place for reducing overlooking, and for allowing the main living spaces to be orientated south and west so as make the most of the afternoon and evening sun.” A spacious balcony and a cantilevered first floor above the main entrance on this front, west-facing elevation reduce the visual massing of this 319m² house. “Most of the volume is instead at the back, on the east-facing elevation,” adds Patrick.

Minimal windows openings on the rear elevation also ensure privacy for both the new dwelling and for the flats adjacent; triangular-shaped rooflights instead punctuate the flat roof, bringing in natural light from above. This side of the house is mainly given over to the ‘service’ areas too – including the bathrooms, utility and plant rooms – where light is at less of a premium as compared with the living spaces.

Having been granted planning permission at committee level in June 2010, the contemporary build finally went on site just over a year later, allowing for a substantial period of detailed project and cost planning – the latter undertaken by a quantity surveyor – and to ensuring a suitable contractor was hired for the task.

One key decision made during this period was the construction system: the house is built in steel frame with timber infill. “The clients did not want any internal columns and steel frame allows for large spans to be achieved,” explains Patrick. “The frame fits into a highly insulated 150mm timber frame infill system. This system also provided an effcient envelop.” (So effcient that a mechanical heat recovery system was specified. Rainwater harvesting and solar thermal panels complete the sustainable picture.)

Living next-door to relatives had some very clear benefits when it came to the build and the delivery of such materials. “When the steel frame was delivered, it was ‘decanted’ on the front drive and slowly brought to the plot via the shared access driveway,” explains Patrick.

Externally, the first floor has been clad in western red cedar, and appears to float above the subtle grey rendered ground floor. “The clients liked the idea of a timber-clad cantilever, having come to us with examples. (We always encourage examples and references.)

However, to ensure the longevity of the cladding, we did not want to take it down to the ground floor. Plus, the different cladding treatments help to articulate the two volumes,” expresses Patrick.

The new contemporary dwelling’s connection to its garden plot is a highlight, with the open plan living/dining/kitchen space framing the greenery at every available opportunity; indeed, leafy branches captured by the cinema screen-sized picture window could easily fool one into thinking the house stood within the midst of the countryside, not suburban Surrey. But the crowning glory is the large set of triple-glazed doors, which can be slid into an aperture within the building envelope, creating an impressive 6.5m-wide opening.

Finally, with future flexibility in mind, the house embraces the Lifetime Homes standard, not to mention features a ground floor snug, which may double as a bedroom with en suite if future needs require.