For Sue and George Davies, self build was a natural choice when their minds turned to downsizing for their retirement. “We didn’t really talk about it, we just both assumed we’d build another home,” smiles Sue.

More natural too, perhaps, given that standing and admiring their latest project from the front drive, the two neighbouring properties were the couple’s aforementioned homes; lining the same lane in their leafy Bedfordshire village. From a characterful but draughty country cottage, to a spacious brick-clad build, to their new home — a 21st-century cottage which boasts light-filled, open plan spaces and an energy bill of just £1 a day. The field which adjoined their first home and provided the couple with a sizable plot for their self build in 1983, was to prove useful once again.

While the couple did not face the traditional plotfinding odyssey, achieving planning for a new home on their one acre garden unfortunately proved “unnecessarily hard work”. George and Sue had originally hoped to build on a different spot, but lying just outside the settlement boundary for the village (which also sits within a Conservation Area), planning was proving a sticking point.

Fortunately their architect, Simon Atkins of ABIR Architects, presented a solution: he suggested building a new home on the strip of land between their old house and a neighbouring property. With Simon on board, ideas for a modern two storey eco home, incorporating the couple’s brief for bright, open plan spaces, began to develop.

Several amendments were required to appease the planners. Windows to the west elevation, for instance, were excluded to address the planners’ concerns with regards to overlooking. Large rooflights positioned some 2m above first floor instead bring in light, while glazing on the front gable was reduced to form a clerestory window. The plans eventually went to appeal, where they were approved.

Choosing SIPs as a Construction System

The couple chose their construction system as SIPs (structural insulated panels). “This system would enable us to build and render the 15m rear wall elsewhere on site and crane it into position.”

“We also realised that SIPs provide exceptional airtightness — we ended up achieving a measured air permeability of 3.012m³/hr/m² @50Pa for the house [under current UK Building Regulations a property should not exceed 10m³/hr/m² @50Pa]. And, it would provide us with several other desirable features: a high degree of insulation; vaulted ceilings upstairs; slim walls for our narrow plot; and speedy construction for building the shell,” continues George.

After researching different suppliers, they opted for SIPs@Clay, who provided the best price and came with a few other advantages as they use the Kingspan TEK® Building System.

Minimising utility bills for their retirement seemed a sensible idea to George and Sue. An air-source heat pump was specified to power the underfloor heating (UFH) on the ground floor.

The couple are particularly impressed with their mechanical ventilation heat recovery system (which recovers humid air from the bathrooms and kitchen to pre-heat fresh air being introduced to the home).

“We have been logging our energy use since we moved in, which was just before Christmas 2013. We use about £900 a year in electricity. However, we get around £500 a year back from Feed-in Tariff payments, giving us an energy bill of just over £1 a day,” continues George. 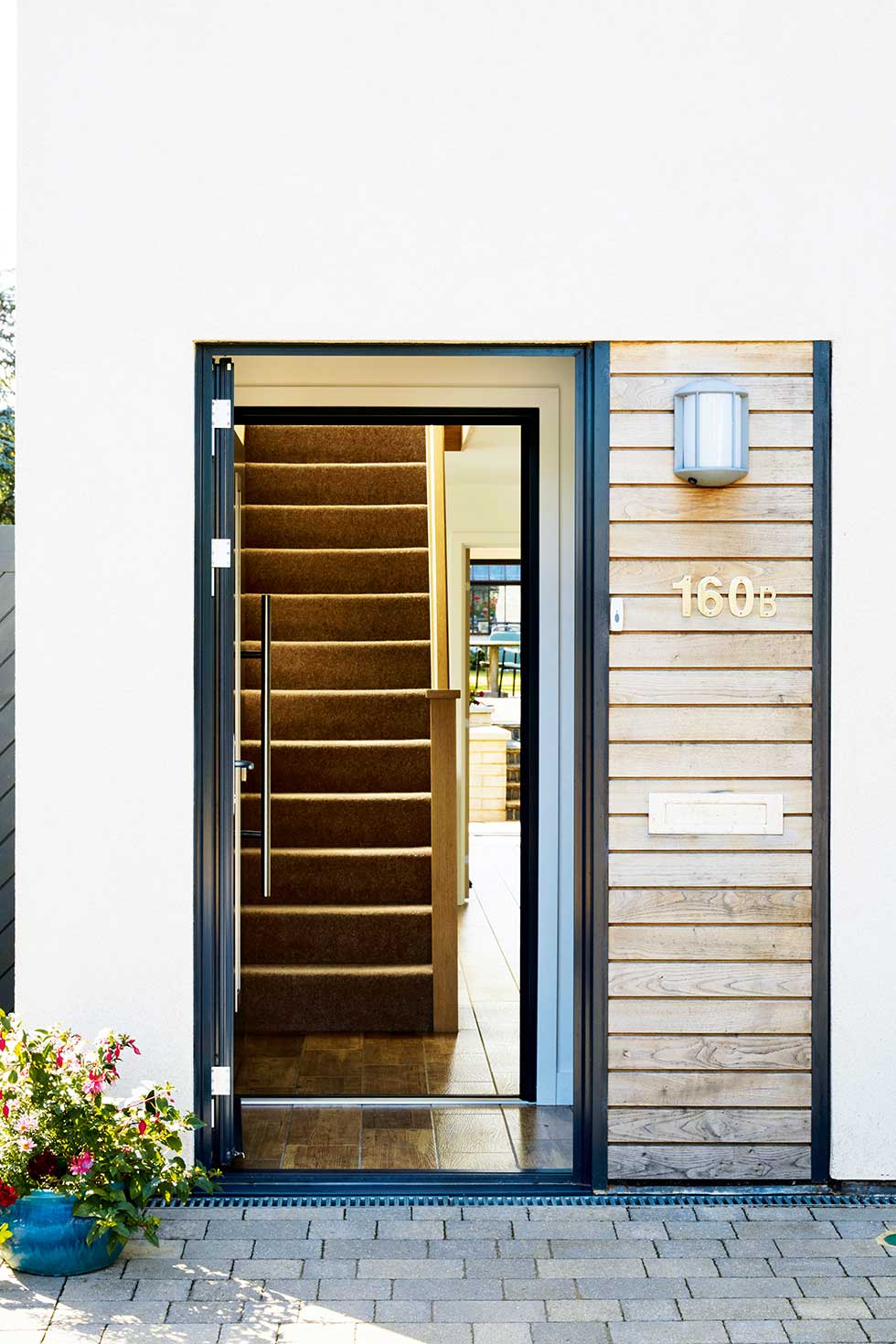 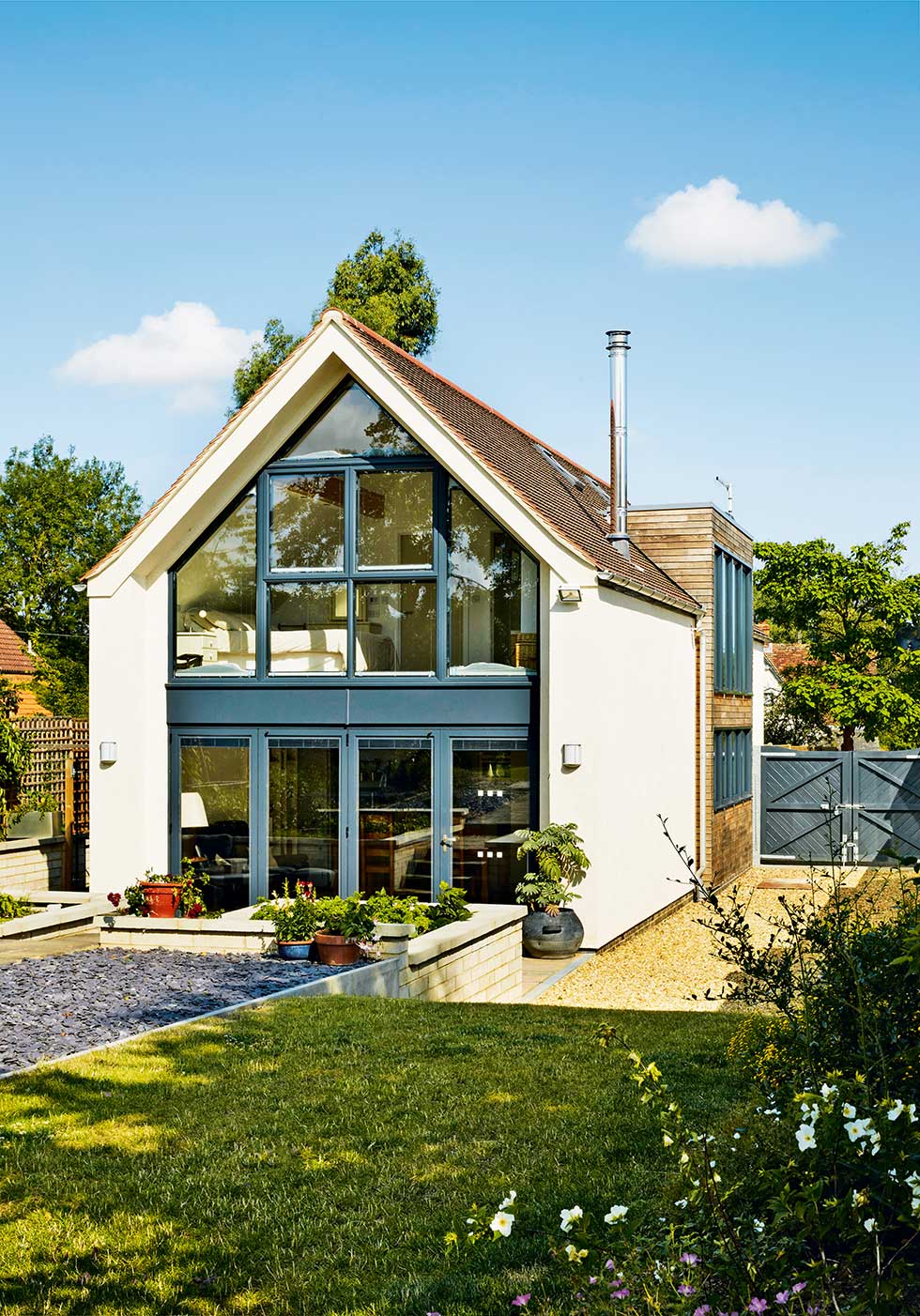 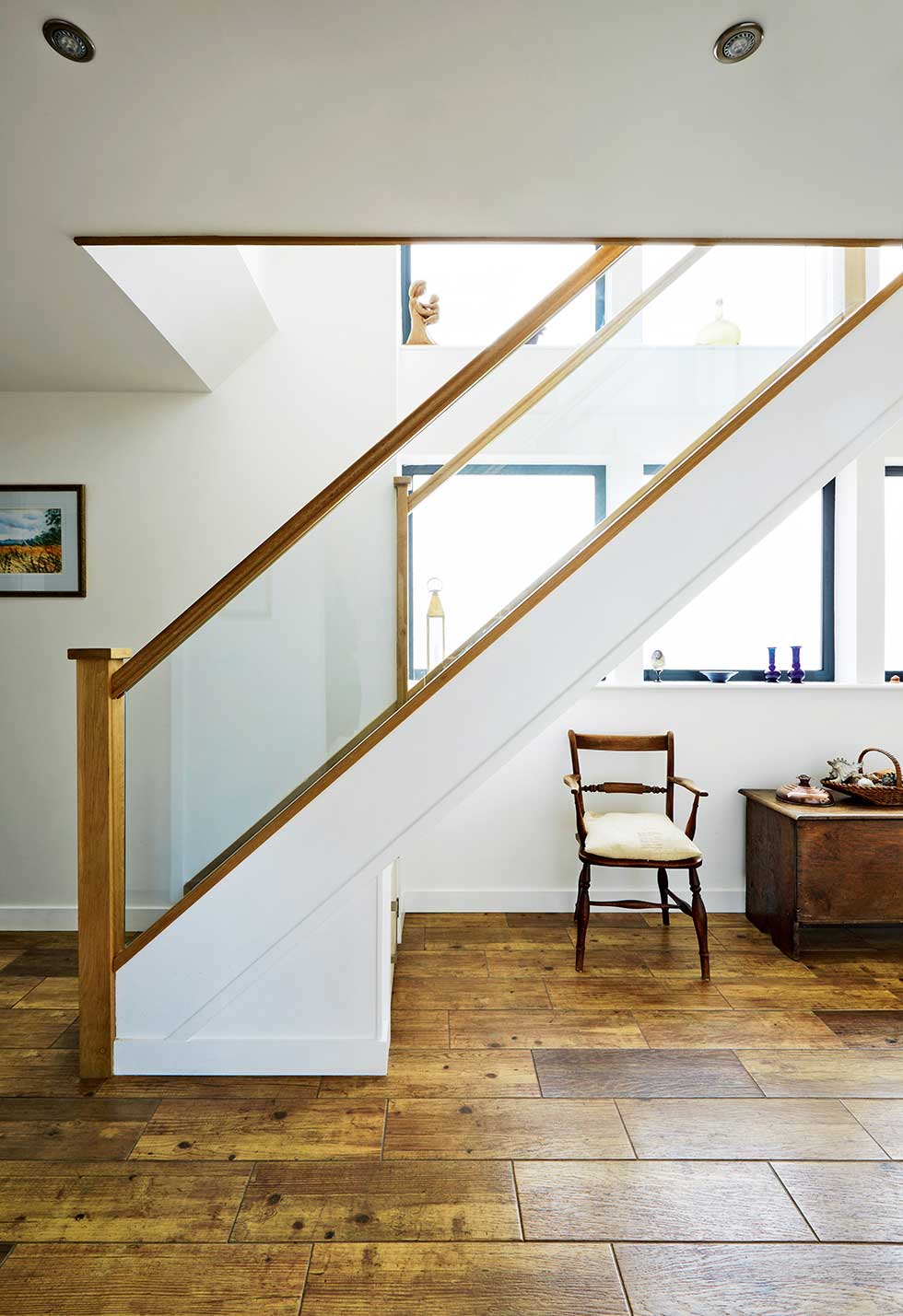 The east elevation features a bank of windows with frosted glass, and rooflights above — bringing in diffused natural light without compromising privacy 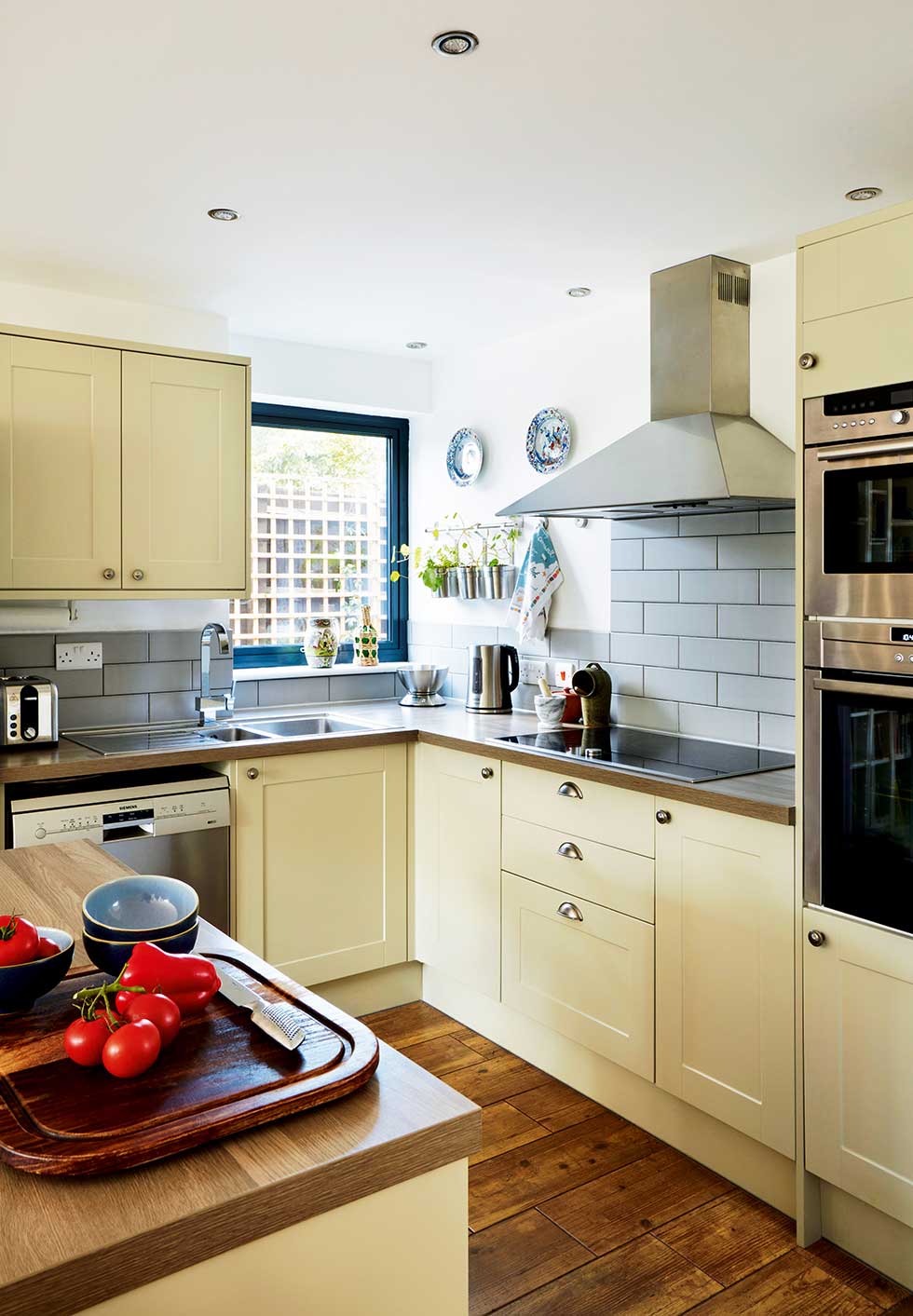 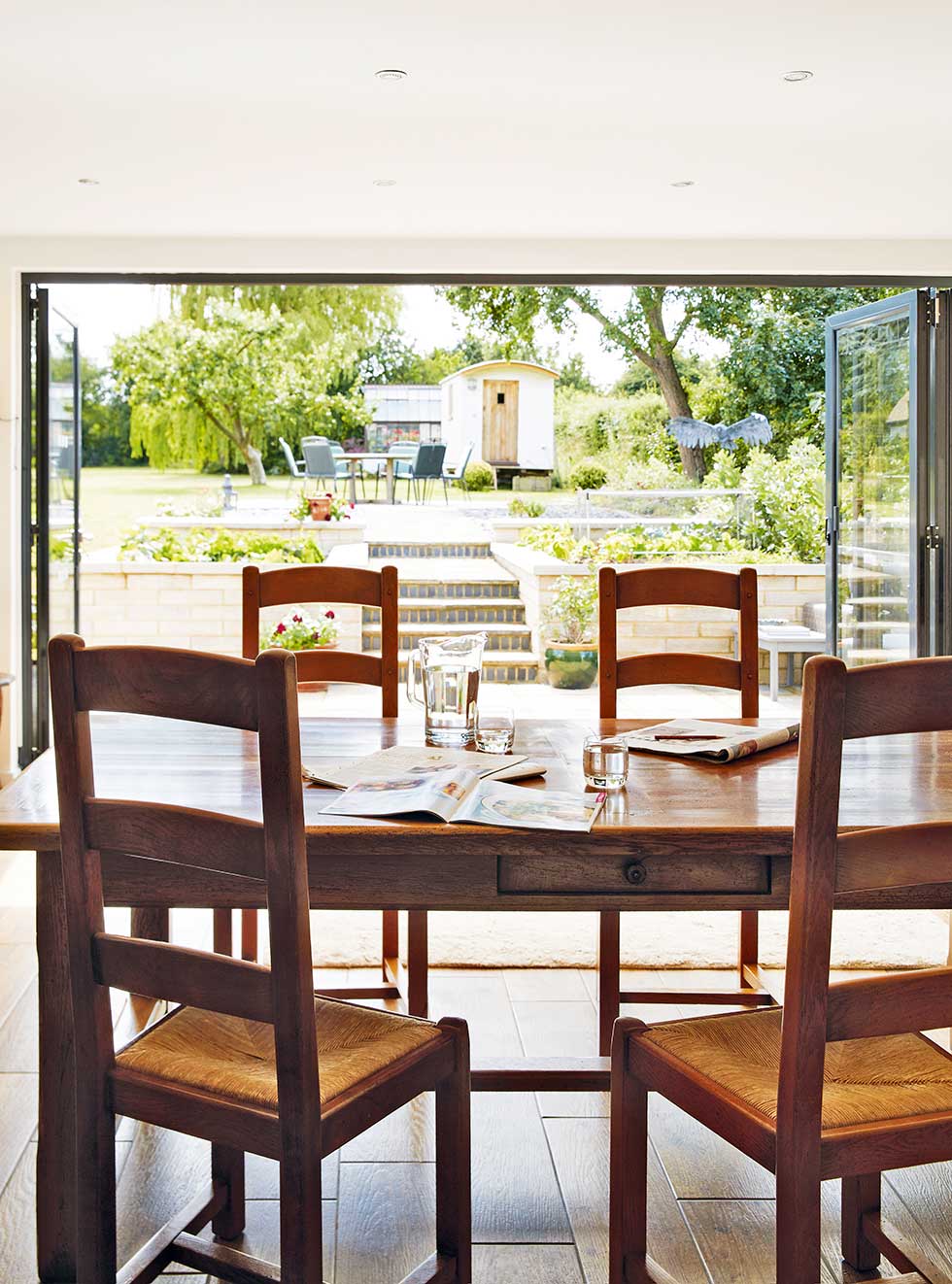 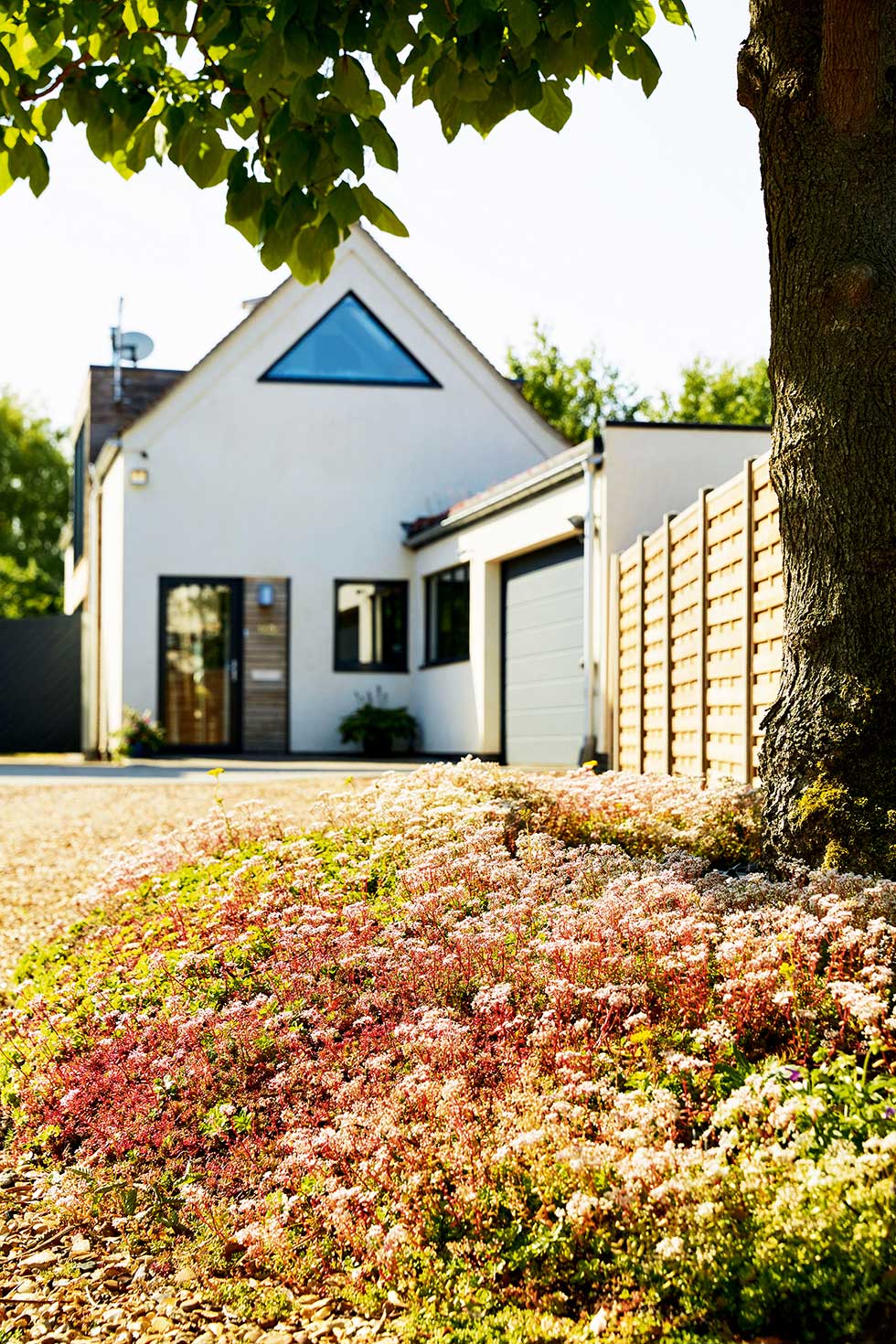 While to the front, a single storey element houses the plant room, garage and George’s workshop; the sedum roof softens the visual impact 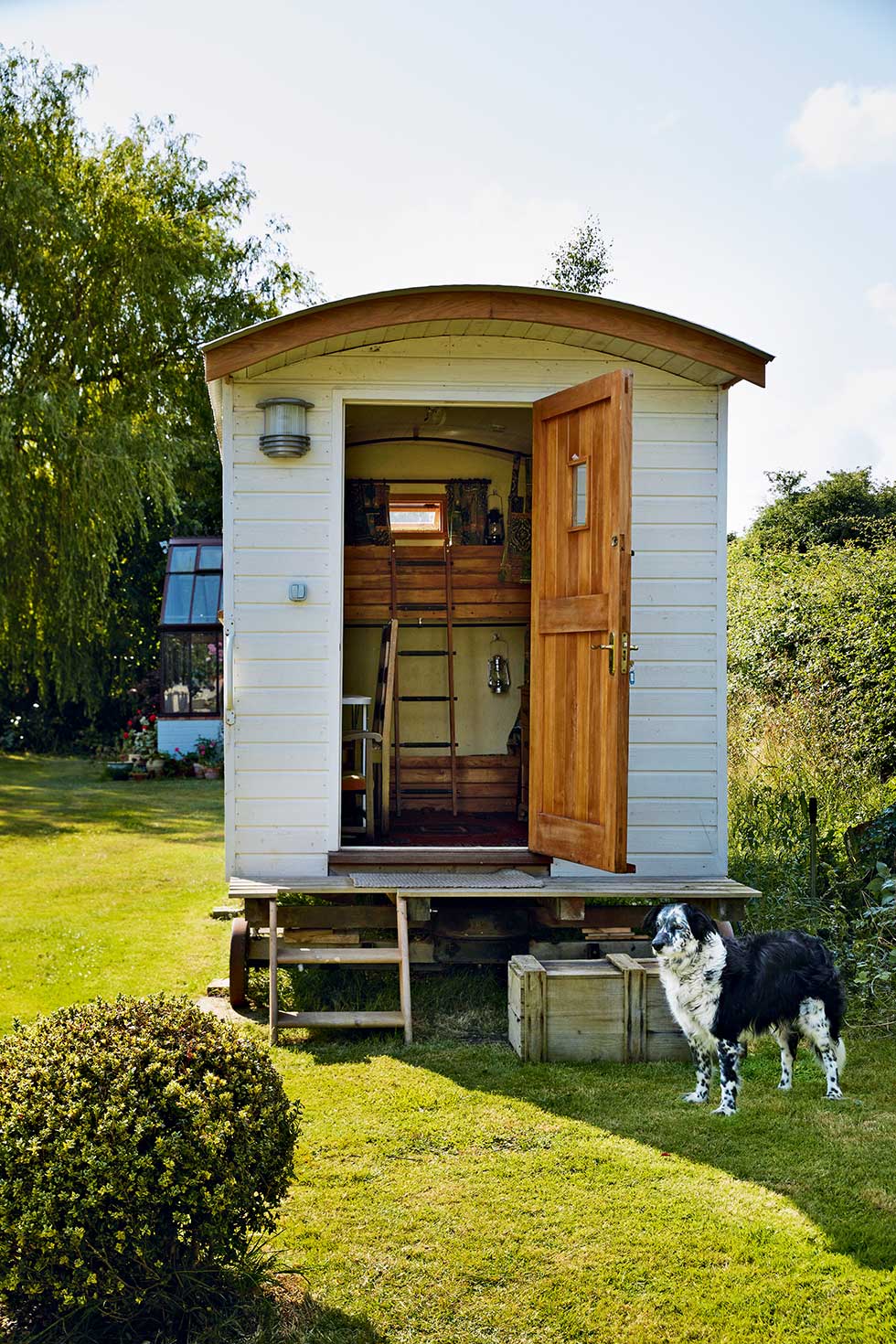 Quite unusually, one of the first tasks completed on site was the building of a shepherd’s hut; this traditional-style structure went on to become an enviable self-build site hut