Brighton Self Build for £90k | Homebuilding & Renovating Skip to content This bijoux eco house was designed and built for just £90,000 by talented product designer Jason Thawley, who applied his engineering knowledge on a much more ambitious scale than usual.

Jason and his wife Sarah could only borrow £160,000 for their project, so they had to be astute with the design and find a budget plot — which was no mean feat in Brighton’s city centre, even when they first started looking back in 2004.

At the time, the couple were renting a flat locally and wanted to renovate or build a small live/work space for themselves and Jason’s growing eco-friendly product design company, Luminair. With property prices steadily climbing, they struggled to find anywhere for four years. Then, one day in the summer of 2008, they came across a single storey 60m² brick paint store with planning for a replacement two-bed house.

It was ideal — however, it was being sold at auction with a guide price of £100,000, so at first the Thawleys dismissed it. Then a few months later the store was advertised through an estate agent with offers over £75,000. After some wrangling, the final sum of £80,000 was agreed. The couple paid the £10,000 deposit with inheritance money, leaving them with just £90,000 of their self build mortgage for the build. “You read how other projects go over budget but we couldn’t because we didn’t have any more money,” says Jason. 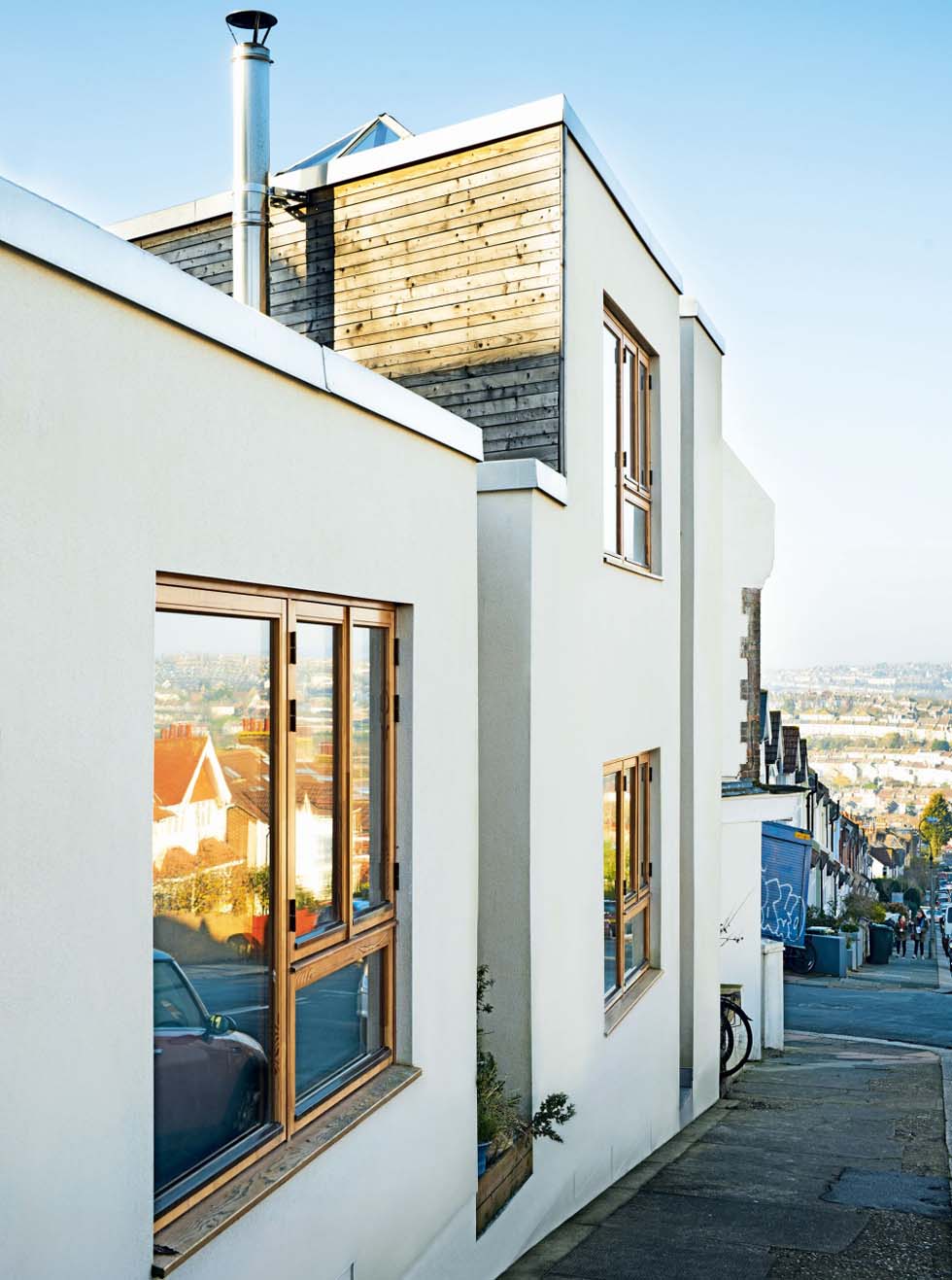 This small, but perfectly formed self build sits upon a triangular plot – once home to a paint shop – in Brighton. Homeowner Jason Thawley designed the timber frame house and built much of it himself. On the front elevation, larch cladding offers contrast and texture against the rendered rear walls; wood also features throughout much of the interiors

He was confident about designing the house using his CAD software. “A lot of what I do is proportion based, so I followed the same principles in this house design,” he says. “Although I understood the technical detail, I still had to spend hours online researching how to join this bit to that bit!”

The paint store was a triangular shape, sandwiched between the garden of the house behind, the street front, and a new development next door. Although the street was residential it was on a steep hill, so overlooking neighbouring houses was another issue to overcome. Jason’s skilful design has used every inch of this small plot, creating rooms with height and depth by drawing the eye along the longest length of the triangle, and oversizing the windows and doorways to give an illusion of space. They’re also carefully positioned to ensure privacy, with rooflights introduced above the dining space and first floor master bedroom to bring in further light. 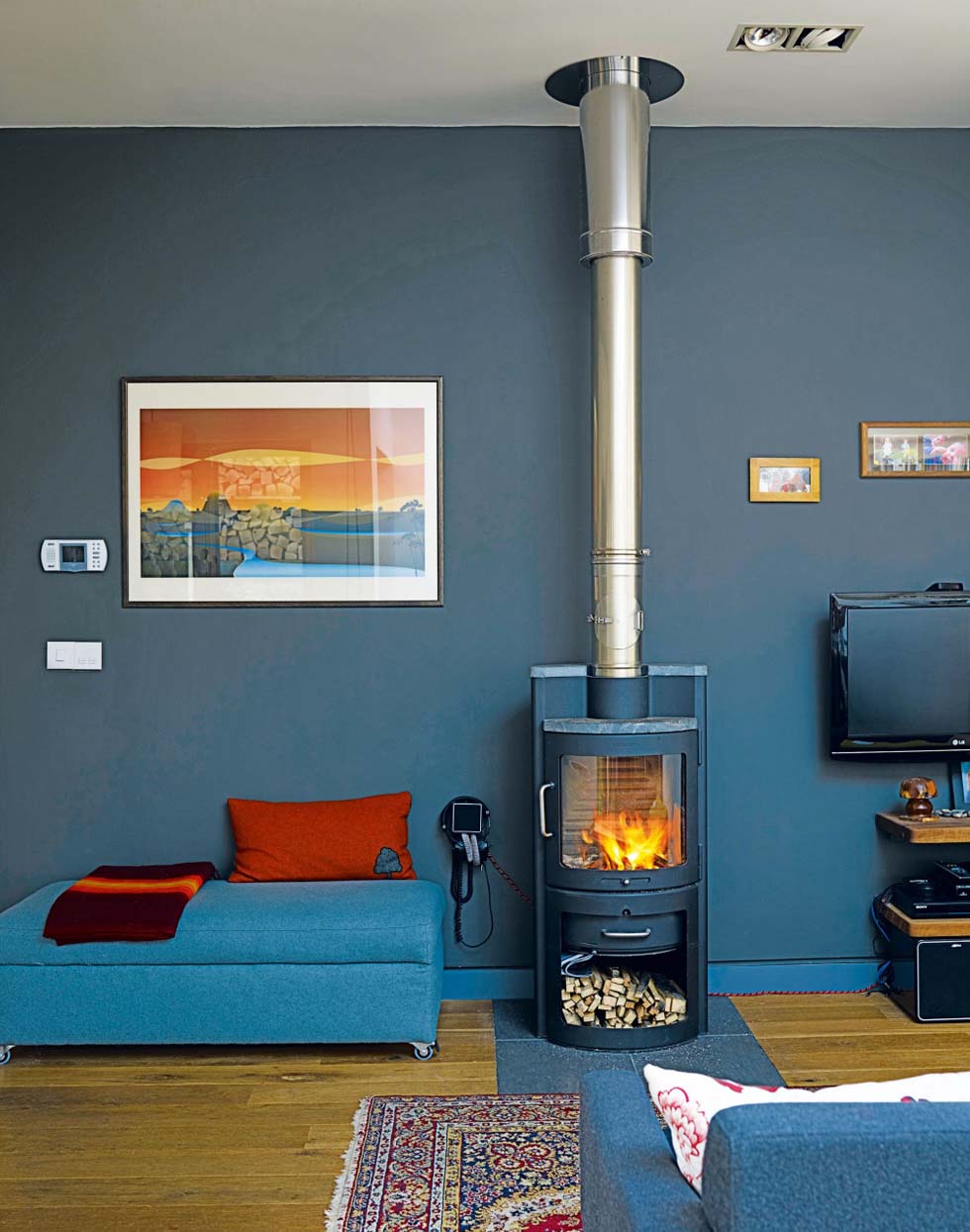 Jason demolished the paint store himself in July 2009. “Quotes were silly money – like the £5,000 asked for demolishing the paint store – so we just had to find other ways of doing things,” he says.

But it wasn’t until the site was clear that he realised quite how difficult the foundations were going to be — the new house had to be built to the edge of each boundary with neighbouring properties to maximise the space on the small 60m² triangular plot. This was further complicated by its proximity to the street front, the poor foundations of the Victorian house behind, and the steep gradient that created different levels within the plot.

By the time Jason had dug out what was needed to terrace the plot so that it stepped sensibly down the hill, the back of the site was 1.8m lower than the neighbouring garden behind. “We had to build a retaining wall to stop the garden falling in and waterproof it like a basement, as our house was so low down,” says Jason. “I also discovered you have to take into account highway loading when you build next to a road, which meant the foundations had to withstand big articulated lorries driving past.”

Jason and Adam Ellis, a structural engineering friend, sat down one evening in the pub to thrash out an engineered foundation design that would meet all the requirements — and Jason’s impossibly tiny budget. “I showed Adam my drawings and we kept going through them to come up with a solution for as little money as possible,” says Jason. “In the end, the design was a reinforced slab foundation that is actually the sort of thing they build multi-storey car parks on.”

Jason again saved money by undertaking the new foundations himself. He estimates that the groundworks and foundations would have cost £20,000, but instead he spent just £5,000 on materials by maximising each sheet of steel on his foundation design. “I knew each piece was eight by four inches so I’d jigsaw the sheet into my diagram knowing that if I had to cut a bit of steel off here, I could use it over there,” he says. 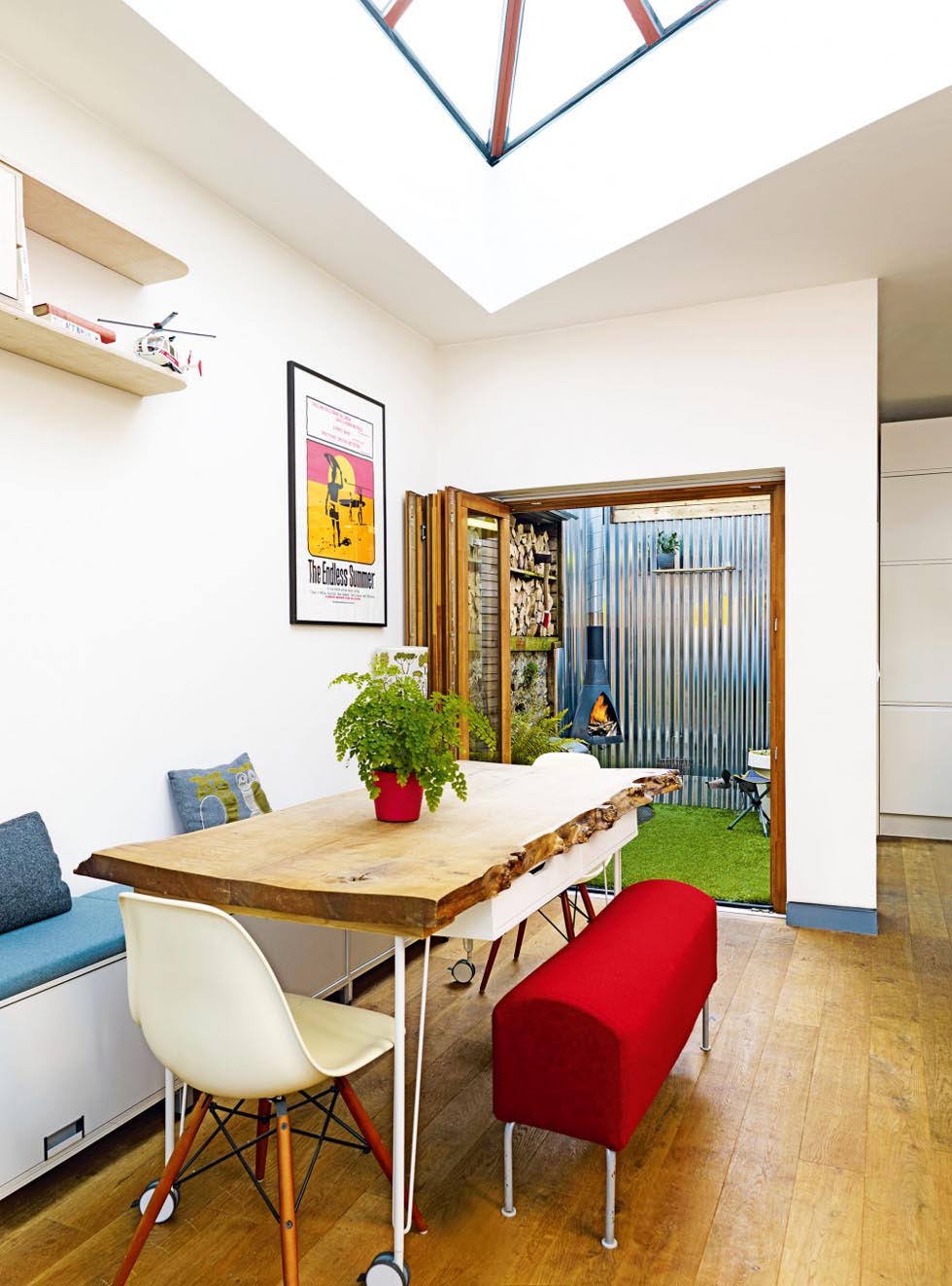 The open plan living, dining and kitchen space is the heart of the house

Building to a Tight Budget

A closed-panel timber frame was the construction system of choice due to its cost-efficiency: the structure would go up quickly, and a large proportion of the build costs would be fixed. Finding a local company to build and erect the system for £35,000 – which included the windows, a front door and 90mm insulation – was a good move.

Once the timber frame was erected, Jason was left to tackle the rest of the build — while he was aware costs would be tight, he didn’t anticipate how much work he was going to have to do. “Doing the plasterboarding was particularly hard work. I carried 100 sheets into the house on my own and screwed each 3m board into place, including the ones on the ceiling!”

He also designed and built the rooflight in the main living area using a steel frame and just two different-sized window panes. The materials cost £1,700 (instead of over £10,000 if he’d had them custom made) and Jason’s stepdad helped to weld the frame together inside the house. The design was made to fit through the void as it was hoisted into place. “There were six of us with ropes and sheer manpower,” says Jason, “and we got the frame up with just a few centimetres to spare.”

Jason also threw nothing away, instead creating a ‘waste pile’. When he needed more materials – for a cupboard door, for example – he would go to the pile first. Leftover plywood from the flat roof deck was even made into window cills. “It’s how I’ve gone about building things ever since I’ve been a kid,” he says. “And in this project it’s saved us thousands of pounds.” 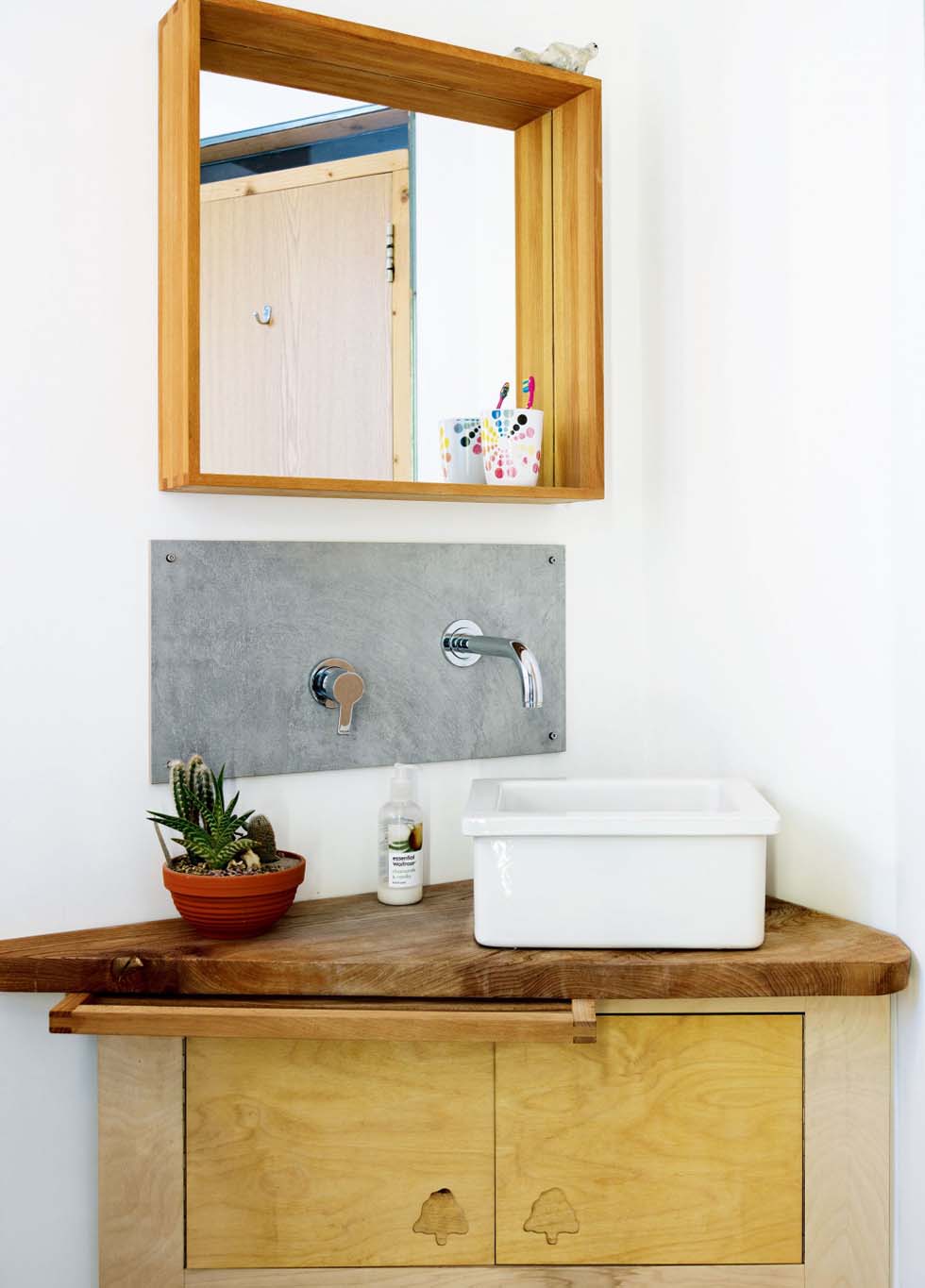 The bathroom features a tap aerator and low-flush WC, designed to save on water consumption. Warm, humid air is extracted from this room and the rest of the house via a heat exchanger. It’s used by the mechanical ventilation heat recovery system to heat incoming fresh air, which in turn is distributed around the house

Initially the couple wanted to build to Passivhaus standards, but this wasn’t an option within their budget. Instead they packed the compact house with insulation and made it airtight with a vapour permeable membrane to trap the solar heat and to prevent heat loss. In addition to the 90mm of rigid insulation, which came complete with the timber frame package, Jason installed further wall and floor insulation.

He spent £500 – instead of £2,000 to £3,000 – on Kingspan insulation seconds. “Seconds & Co. sells boards that are a bit battered and don’t have the foil layer, but that didn’t matter as we had some insulation with the foil already on.”

Jason and Sarah decided to forgo the expense of underfloor heating and a combi boiler, as it was going to cost £9,000 to connect to mains gas. Instead the house has a woodburning stove for the colder months, with a mechanical ventilation heat recovery system distributing the generated heat around the house. Hot water is provided by solar thermal panels and backed up by an electric tank. 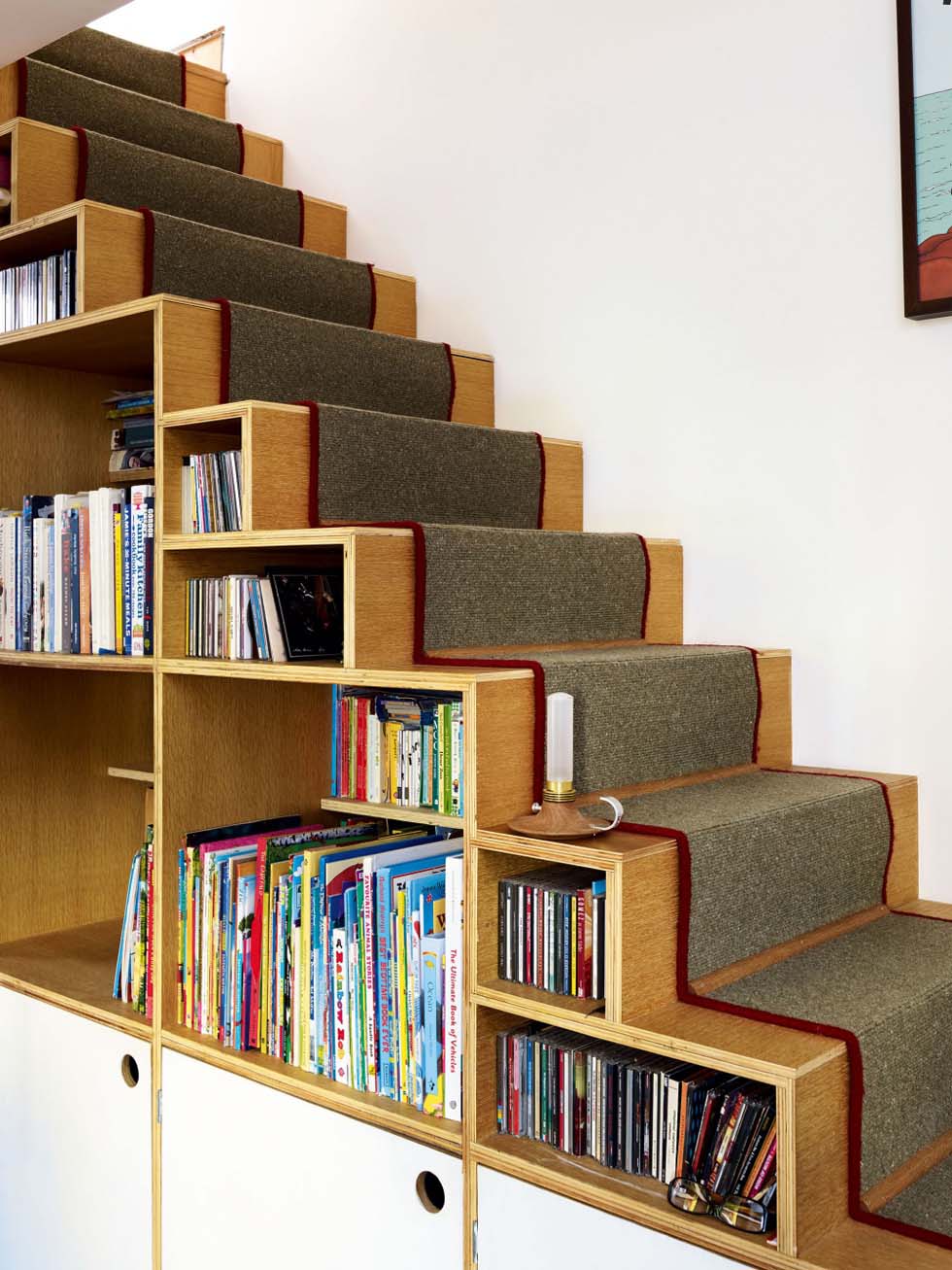 Jason designed and built the staircase using four to five sheets of plywood — he estimates that it cost around £150. It provides useful storage and display space for books and CDs in this small home

Just as the end was in sight, tragedy struck when Sarah had a reoccurrence of a brain tumour during the last stages of her pregnancy. Jason says he was determined to finish the house. “We’d been fighting Sarah’s tumour for most of our lives together, and had invested two years into building this house, so we weren’t going to let her illness stop us. If this was her end, we wanted it to be here.

“Friends and family did an amazing amount in those last two months — even a friend of a friend with a building firm came one weekend to do the tiling and finish the kitchen for us.”

By July 2011 it was a relief to have the house finally habitable. Sarah came home with baby Leo and was able to enjoy their new family home for a couple more years, but sadly the tumour returned and she passed away.

It’s been a challenging time for Jason and the children, but he continued to put a lot of hard work and love into the last details of the house, resulting in a finished home that has given the family solace. “Our home has protected us, kept us warm and been a happy and safe place for the kids and myself to spend time in these last few years,” says Jason. “But it’s a modest house with a big soul, and we’re starting to outgrow it now. It will be hard to let it go but I really hope it’s going to give somebody else a lot of joy and love.”