A Sustainable Self Build in Devon | Homebuilding & Renovating Skip to content “Our two-acre plot came with many of the problems that H&R readers are often warned about,” recalls Philip Nierop with a grin. “Difficult access, sloping ground, no mains services and as we soon discovered — bats!” Undeterred, Philip and his wife, Margaret, decided to continue with their self-build dream, encouraged by the elevated rural location of their secluded Devon site and the stunning farreaching views it enjoys.

The couple had decided to relocate from Lancashire to the West Country once their children, Lionel and Katharine, left for university. After selling their home they moved south into rented accommodation while they hunted for a plot — which took just seven weeks.

“People were amazed that we found our land so easily, but we spent those weeks doing nothing but visiting estate agents, who made it clear that they thought we were wasting our time,” says Philip. “We drove around the area looking for potential infills, checking out leads on Plotfinder.net, and spent our evenings trawling the web.”

It was Margaret who first spotted the derelict 1930s bungalow, just four miles from the centre of Exeter, described on the internet as ‘suitable for renovation/ possible demolition’. The couple looked up the location on an Ordnance Survey map and almost dismissed the plot as being too close to the A30, until they realised that it was 700 feet higher than the busy trunk road.

Being the first people to view the property, the couple wasted no time in making their offer via a sealed bid. Their proposal was successful and in no time Philip and Margaret began to compile a detailed brief for a replacement dwelling on the site. “We’d already undertaken a huge amount of research and attended self-build shows, so that by the time it came to talking to architects we had very firm ideas of what we wanted,” explains Philip, who wrote an informal four-page brief which included optimum room sizes based on the family’s previous homes.

In essence, the couple envisaged a light, open house designed for the 21st century — contemporary in style and ecologically sound but not overtly ‘eco’ in appearance. They wanted rooms which could connect to the garden and would lend themselves to entertaining — making the most of the views.

The couple scheduled a meeting with Paul Humphries Architects, an award-winning practice specialising in contemporary and ecofriendly property designs. “We’d renovated several period houses, and loved the character of these old buildings, but we were tired of trying to heat them and fed up of having cold feet every winter,” Philip explains, “so a new build really was a total change of direction and we wanted to include as many ecological elements as possible.”

The resulting design was so carefully considered that Philip and Margaret’s new home barely deviates from the practice’s initial sketch proposal. “We loved it from the word go,” says Margaret. “In fact, we were quite overwhelmed, and the planners were extremely supportive of the design.”

The single storey house is characterised by walls of fulllength aluminium-framed win – d ows and glass doors in many rooms, lined internally with timber, which give access to the garden and superb views of the surrounding countryside.

The property’s timber frame construction has been clad externally with a combination of pink-painted render and Siberian larch. A one-roomdeep bedroom block effectively acts as a windbreak on the exposed site, curving to meet the living area which features glulam posts and beams.

Designed to remain below the ridge height of the previous bungalow, the house has been dug into the hillside and the floor levels are stepped to follow the contours of the sloping site.

The roof is predominantly clad in zinc, with a flat section of Roofkrete above the main living space on which the solar panels are sited, and an overhanging brise soleil shades the west façade where glazing maximises solar gain in the winter.

The building has been highly insulated — tiled floors in the kitchen and living room act as an efficient heat sink, and underfloor heating from a 2kW ground-source heat pump is operated during off-peak hours. Water from the newly sunk borehole is solar heated, and a seven-metre-long rectangular rainwater-capture pond serves the garden.

Planning permission was easily achieved for the new house, but unforeseen problems arose when the discovery of bat droppings in the disused bungalow postponed the build. “We had to pay for an expensive survey and were instructed to design a separate garden building to re-home the bats, which cost over £11,000 to build and used up much of our contingency fund,” says Margaret.

One year later and the existing bungalow could finally be demolished, with strip foundations designed to the complicated shape of the new house.

Excavating the site to accommodate the groundsource heating pipes proved a more complex and expensive task than first anticipated, and further sitespecific problems ensued. “We knew that access wasn’t fantastic, but one delivery driver actually ended up in tears and refused to come back,” recalls Philip.

The post and beam timber frame was constructed off site by a local company, and took eight weeks to erect. Margaret took charge of ordering materials and chasing deliveries whilst Philip, who has a furnituremaking qualification, worked on site on a daily basis.

“We did a phenomenal amount of reading and planning, but nothing could have prepared us for the raw reality of a self-build project,” Philip admits. However, the finished house is a testament to the couple’s determination. Tall, thin windows and lowlevel lighting illuminate the curving corridor of the bedroom block, from which steps lead up into the airy living room. Here a contemporary log-burner stands against a half-height wall and porcelain floor tiles have been laid over the underfloor heating. Illuminated from above by a roof lantern, the living space is overlooked by the raised kitchen and its towering wall of feature glazing which overlooks woodland beyond.

“We could write a book about this build, it’s been so eventful, and we’ve had a steady stream of people knocking on the door, wanting to see inside the house,” says Philip. “After experiencing such a warm, environmentally friendly home we could never go back to living in a draughty older property, but we now realise just how demanding self-building can be — no matter how well prepared you think you are! 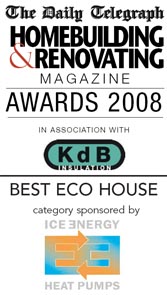 Philip and Margaret might be first-time self-builders, but their fresh outlook is an inspiration to anyone daunted by the process of ‘starting from scratch’. A mature angle to housebuilding – taking the best that the eco market has to offer and placing it handin- hand with a deeply analytical approach to specification – resulted in several innovative solutions, not least the remarkable glass downpipe. H&R loved the post and beam system too. Whilst being unashamedly dominant throughout the interior, it also retains a certain subtlety, and its floor-floating bottom is a clever design touch. This remarkable property, set on a magnificent site, isn’t just green for green’s sake either. The house complements Philip and Margaret’s sustainable lifestyle perfectly — they have a growing veggie patch and spend lots of time outdoors. The couple are thrilled with their Kensa heat pump too, which is one of the cheapest we came across at £3,800.