A Striking Self Build | Homebuilding & Renovating Skip to content A tortuous four-year planning battle wasn’t enough to stop Tim and Ceridwen Coulson building an organic-style home that uses stone and glass to masterly effect. No wonder it’s the 2013 Overall Winner of the Homebuilding & Renovating Awards.

“Organic buildings are the strength and lightness of the spiders’ spinning, buildings qualified by light, bred by native character to everyone and married to the ground.”

If ever Frank Lloyd Wright’s guidance about successful organic architecture could be relevant to building one-off homes in Britain in the early 21st century, then it’s here, for the fabulous Carreg a Gwydr (Welsh for Stone and Glass) — a masterly self-build in the countryside outside Chepstow that is the pride and joy of its owners, Tim and Ceridwen Coulson, and its architect, Martin Hall of Hall + Bednarczyk.

It all started off with a vision; as everything great must. The owners could see past the tired mid-1950s house already on the site to the views — a dreamy 270° vista of private farmland. The large plot sat on the edge of a small settlement within an Area of Outstanding Natural Beauty (AONB). With strict policies on replacement in place (initially up to no more than 30 per cent extra volume was allowed), they turned to Hall + Bednarczyk (who had already won a RIBA Award in 2011 for the four-bed home ‘Blue Door’) for help. 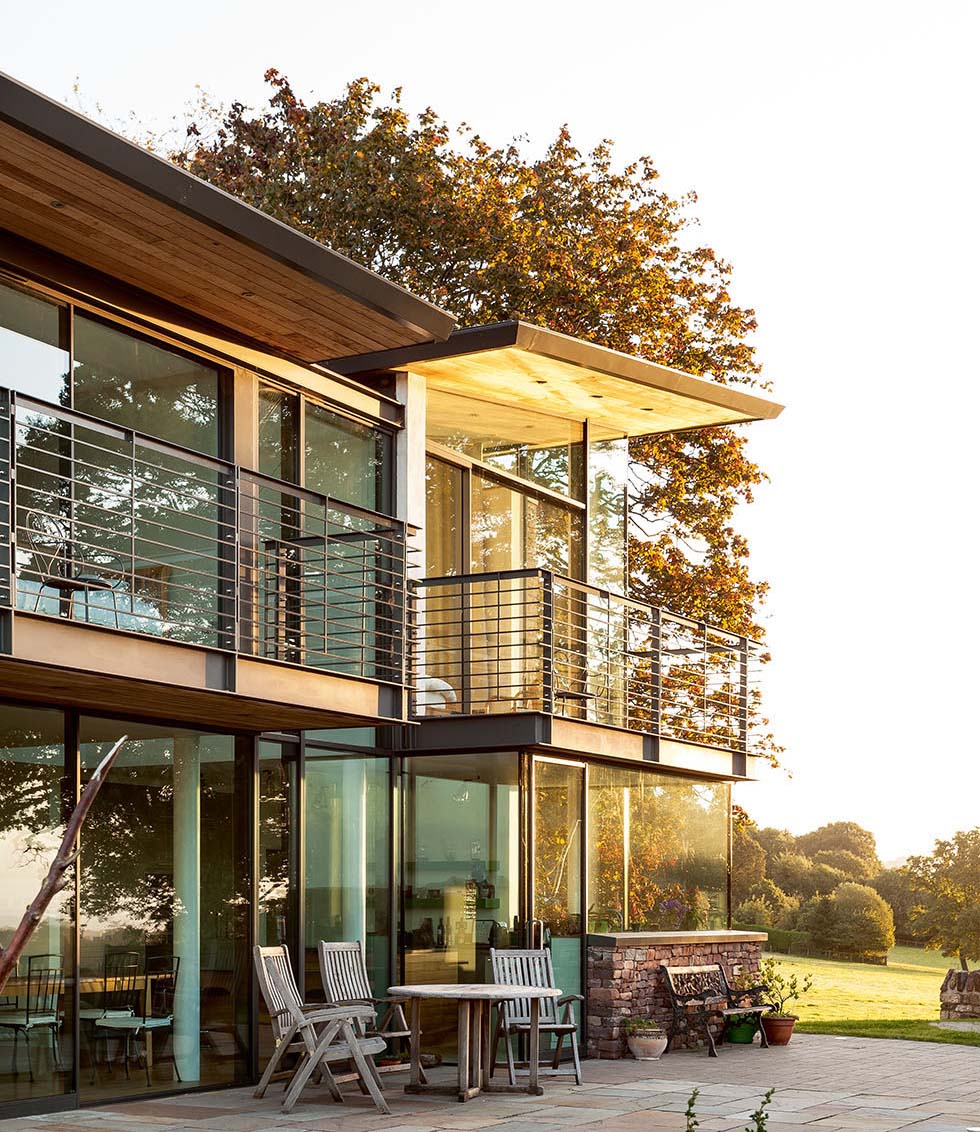 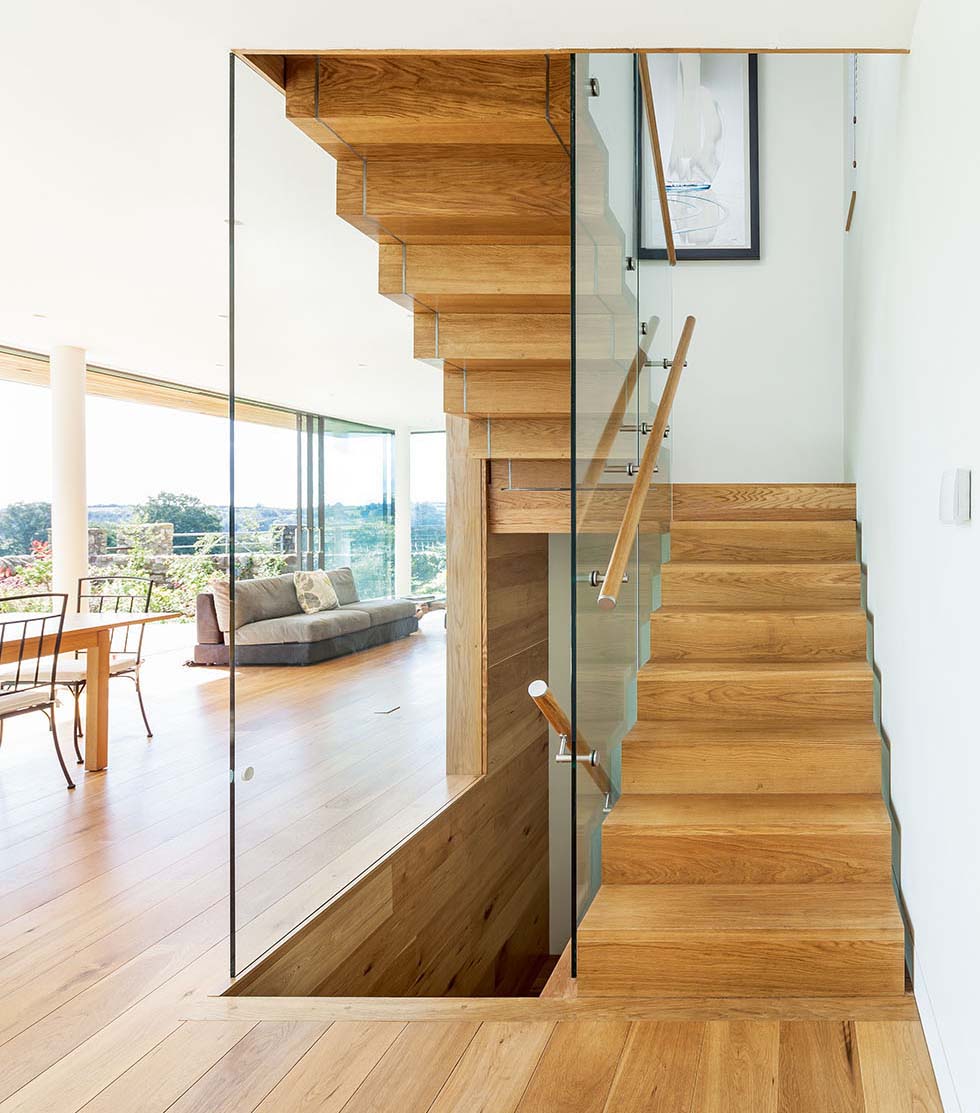 “We then spent an evening with Martin and Kelly, and over a couple of bottles of fine wine we went through a slideshow of contemporary architecture of houses from around the world and we picked out features that we liked. It might just have been a wall in one photo or a flight of stairs in another and we slowly gave them ideas of what we hoped to achieve.

“We stipulated that the house should be built of natural products such as stone, glass and wood — preferably recycling the stone from the original cottage, although this wasn’t achieved. We then gave them free rein to come up with a design. They have a very distinctive ‘look’ to their designs so we had an idea of what to expect. We were very happy with the design from the word go and are quick to make decisions, so went with the original design with only a few interior alterations.”

“Tim and Ceridwen wanted modern, but not too modern,” explains Martin Hall. “We knew that we needed to maximise the potential of the site both in spatial terms and to take full advantage of the views. The new house would be in the same position as the old and the solution was to use natural materials where possible to the public-facing (front) elevation, with a private rear elevation dominated by glass.” 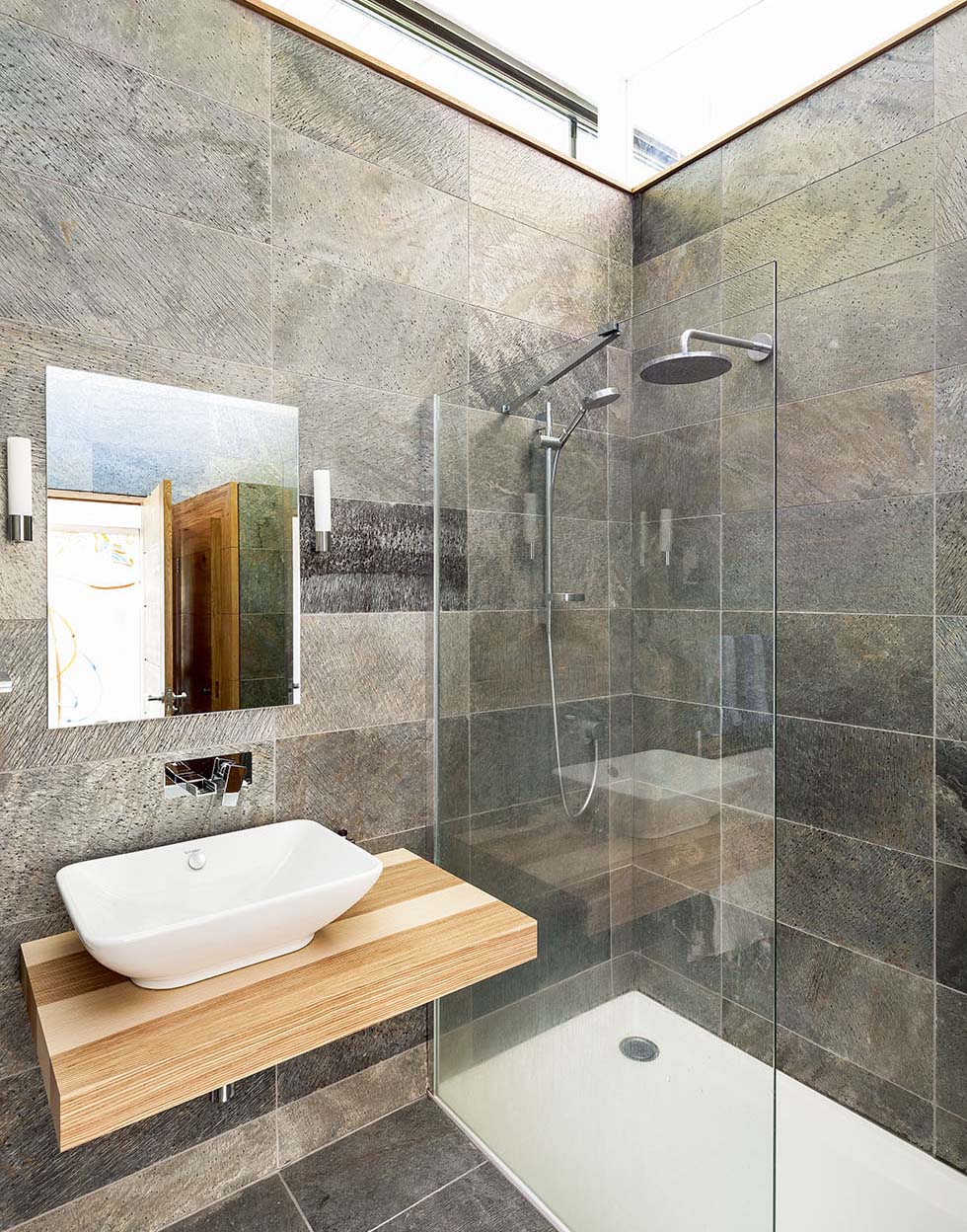 Because of the tight restrictions on volume, they decided to maximise the habitable space through the use of very low-pitched (practically flat) roofs and the inclusion of a basement. The north-facing front elevation has been clad in a mix of 175mm-thick sandstone, sourced from a local quarry, cut and laid with hidden joints to create a contemporary drystone wall effect, and western redcedar, laid horizontally.

Minimal openings to this elevation create a sense of privacy and contrast with the flared, open glass frontage of the south-facing rear, which incorporates overhangs to take the worst of the heat of the midday sun off the windows. The sandstone wall is a 75mm double blockwork cavity wall (with the stone an extra skin); the rest of the house is built off a steel frame, for its strength and slender lines. 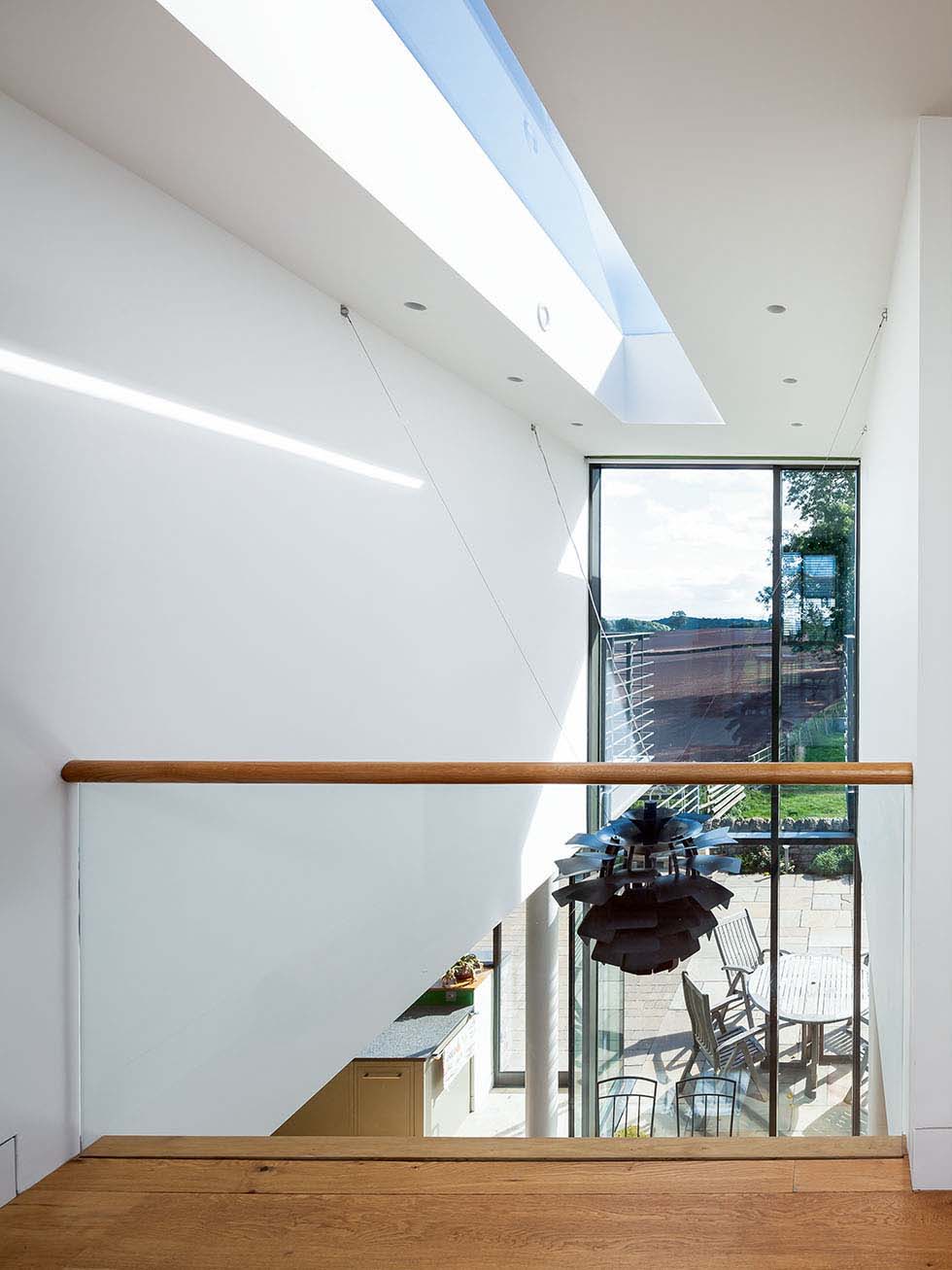 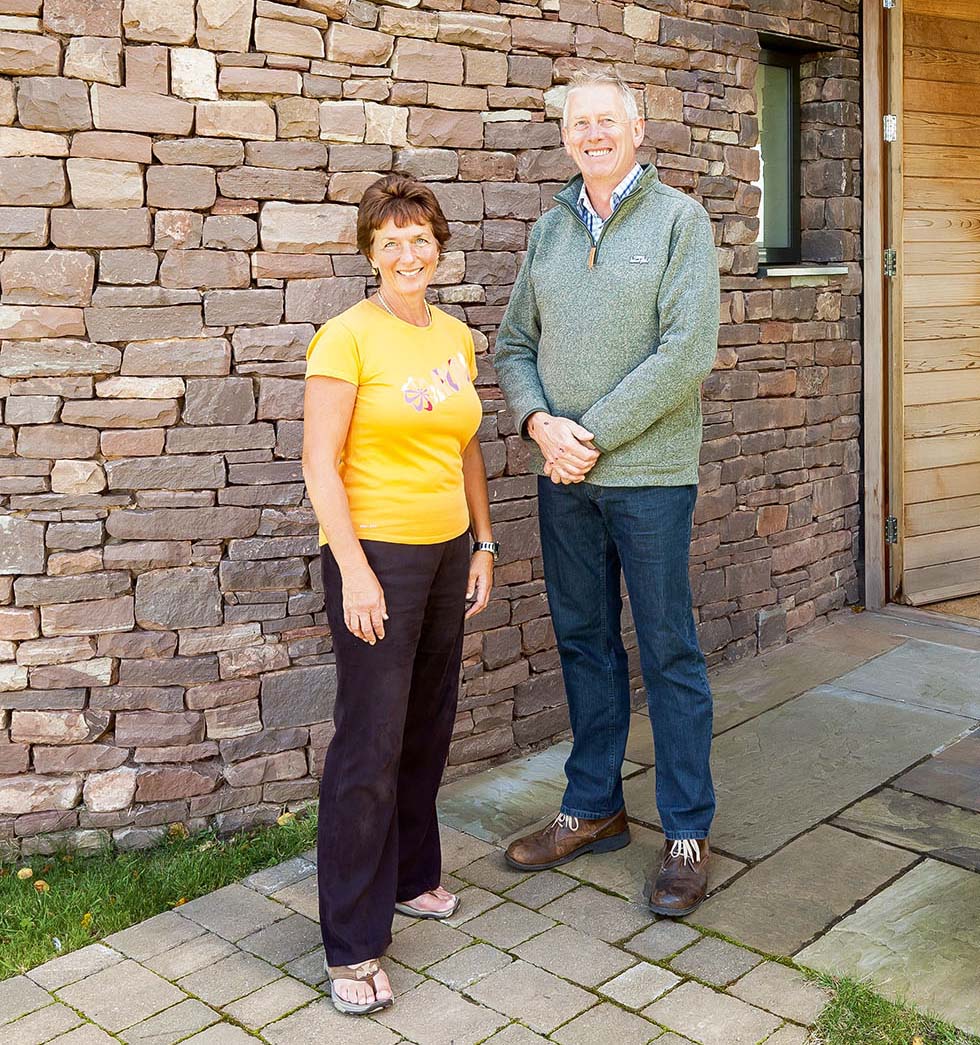 All of which rather begs the question — how contemporary is it? This house doesn’t really conform to our notion of what a modern house might look like — namely white render and harsh, straight lines. But its principles are very much of the moment, being sensitive to its surroundings, with its low, horizontal form merging with the landscape, and its use of modern steel and glass to suck in all of that view. The curves, the softer feel and the natural materials make this a rural home, effectively, and if that is the way modern house design is heading, then we’re all for it.