If ever a house showed how contemporary design can not only fit well in to a country setting but also enhance it, it is this one. Designed for Mike and Ann Urwin – dentists who wanted a change of scene and pace for their retirement – this astonishingly beautiful steel frame home is designed around the stunning views.

However, it is not only to be enjoyed from inside, as outside is a masterclass in creating a visually striking home that does not impose itself on its surroundings. In addition, the future of the home has been carefully considered and low energy living embraced so that the home plays its part environmentally.

Mike and Ann already lived by Loch Awe (in the western Highlands) in a large period home. As the home had all of the associated problems of an older house, and the couple wanted to downsize, they decided to self build on the adjoining land. This meant they wouldn’t have to leave the amazing location.The Site

They gained planning consent for the new home as a croft, which carried certain restrictions and conditions, such as them having to operate it as a live working farm. Aside from that, they could build in pretty much any style they liked. 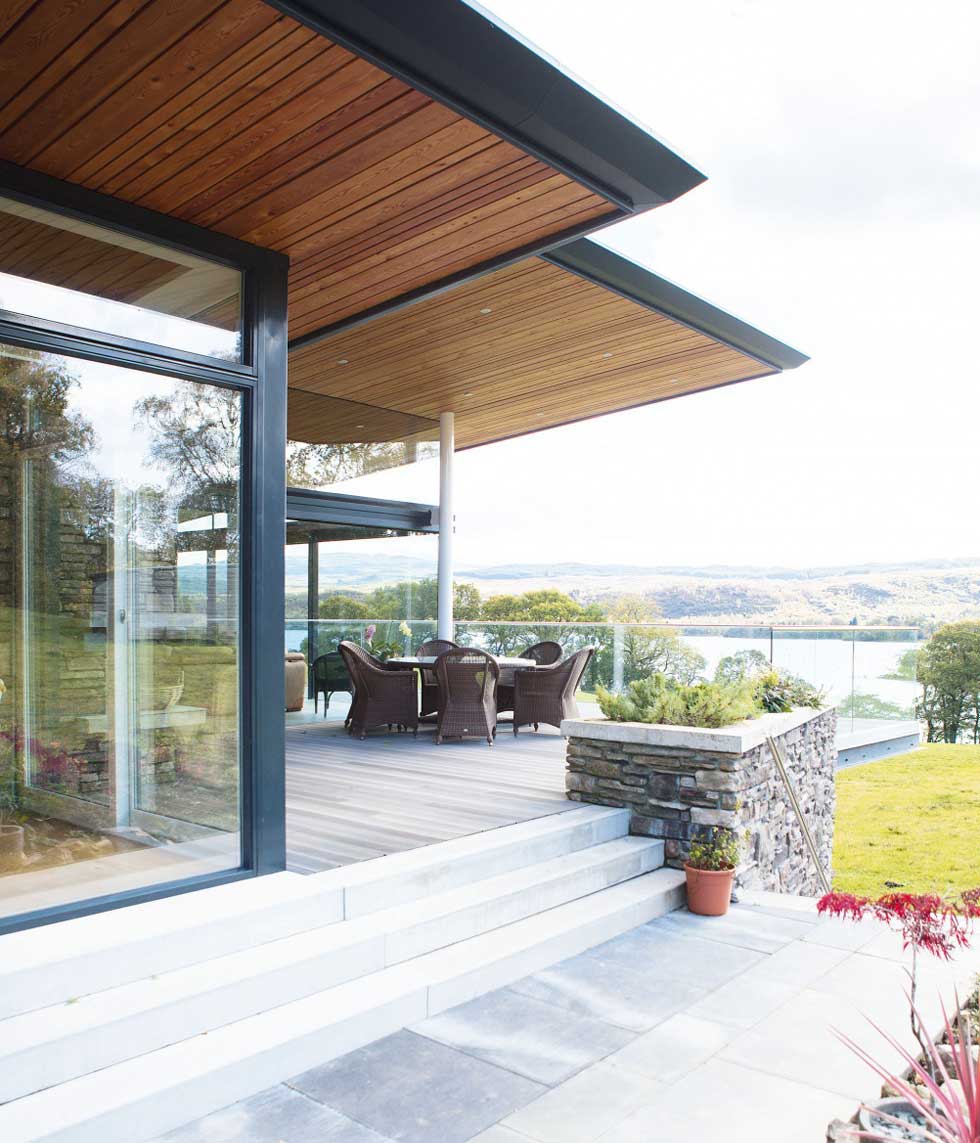 The couple felt it would be odd to build a new house in a period style, so they were open to the idea of a very contemporary home. They asked the main contractor they wanted to work with, to identify an architect and he put forward Glasgow firm McInnes Gardner as an option.

Architect Alastair MacIntyre from the practice, impressed them with his initial sketches so they set to fleshing out the plans. They asked him to design a home which would enable them to downsize, but still have room to accommodate visiting children and grandchildren. It also needed to be cheaper to heat than their previous home, and with this it was important that it be as green as possible.

Of course, an overarching requirement was that the views be a central part of the design. On top of this, because of the croft status storage and barns had to be included in the scheme. 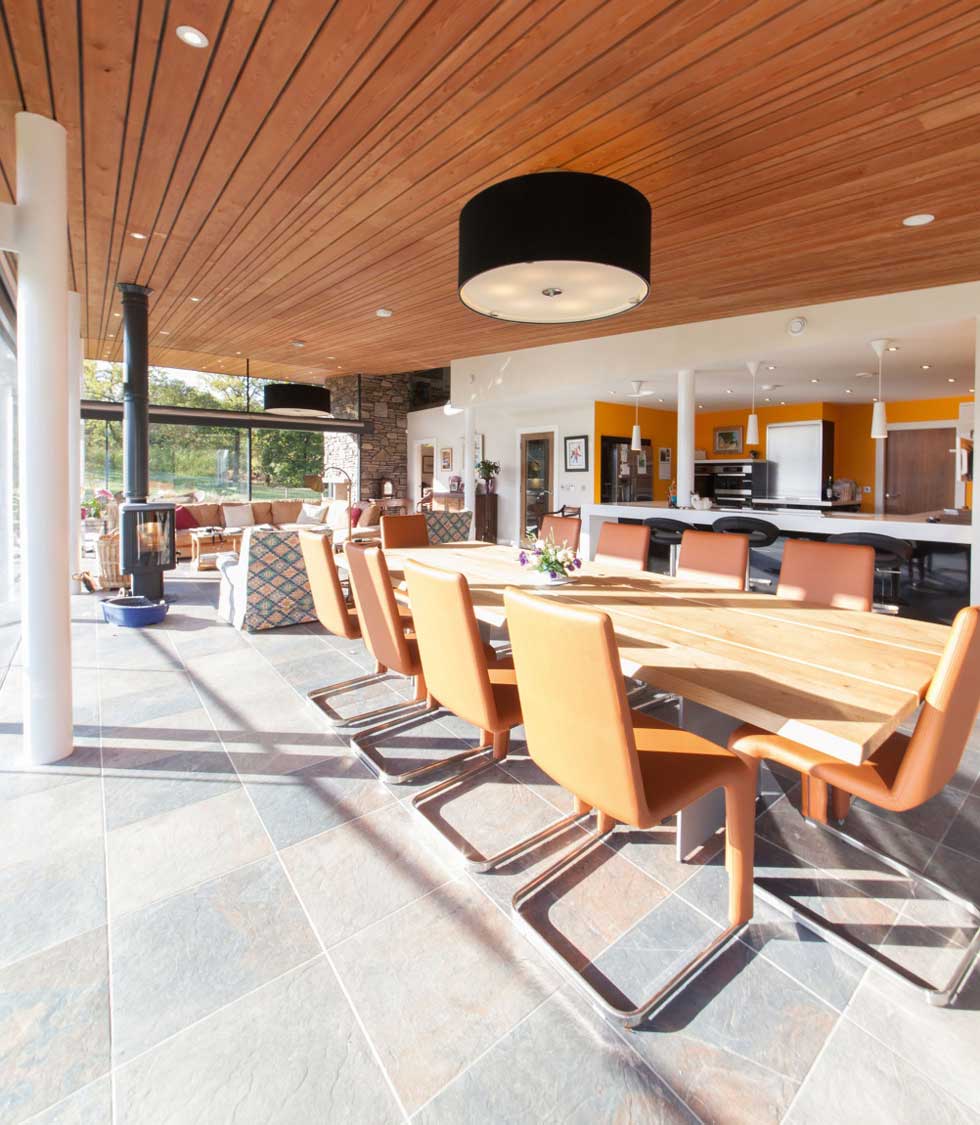 In part the site dictated the design. Sitting at the top of a small valley, the slopes of the landscape inspired the roof lines. The ground floor is essentially a large glass box with a large roof overhang which creates the main living areas and a covered deck outside. This flowing space is angled to overlook Loch Awe.

Tucked behind the open plan living space and music room is the master bedroom and twin study areas. Then below, the lower ground floor houses a series of en suite guest bedrooms.

Alastair was keen that his interpretation of modern, avoid the ubiquitous Modernist white box, so they purposely chose materials that were more natural to help the contemporary design blend into the landscape. A lot of the structure is glass, which provides a transparent façade. Elsewhere, the home has been clad with larch, stone and a neutral coloured render.

The undoubted triumph of this place, however, is the series of three cascading roofs — one flat, two sloping. Built out of a steel frame and supported by impressively lean steel pillars, it is a house that wears its engineering nouse on its sleeve, and is all the better for it. The sloping monopitch roof over the main living area feels brilliantly heavy and is the focal point of the design, highlighted internally with pine boards cut to varied gauges.

It’s simple, all very mid-century, and hugely effective in allowing bags of light and air to circulate. Even better, just as you think with all this glass and steel that it could feel light and temporary, the whole thing is anchored to the ground with a chunky stone chimney and facing wall. 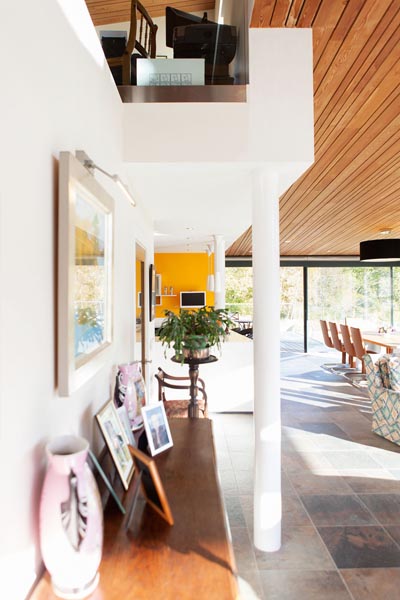 Another aspect that Mike and Ann are particularly happy with is the home’s performance. The house is well insulated and naturally warm due to the levels of south-facing glazing. They also specified a ground-source heat pump to feed the underfloor heating, complemented by a mechanical ventilation and heat recovery system. 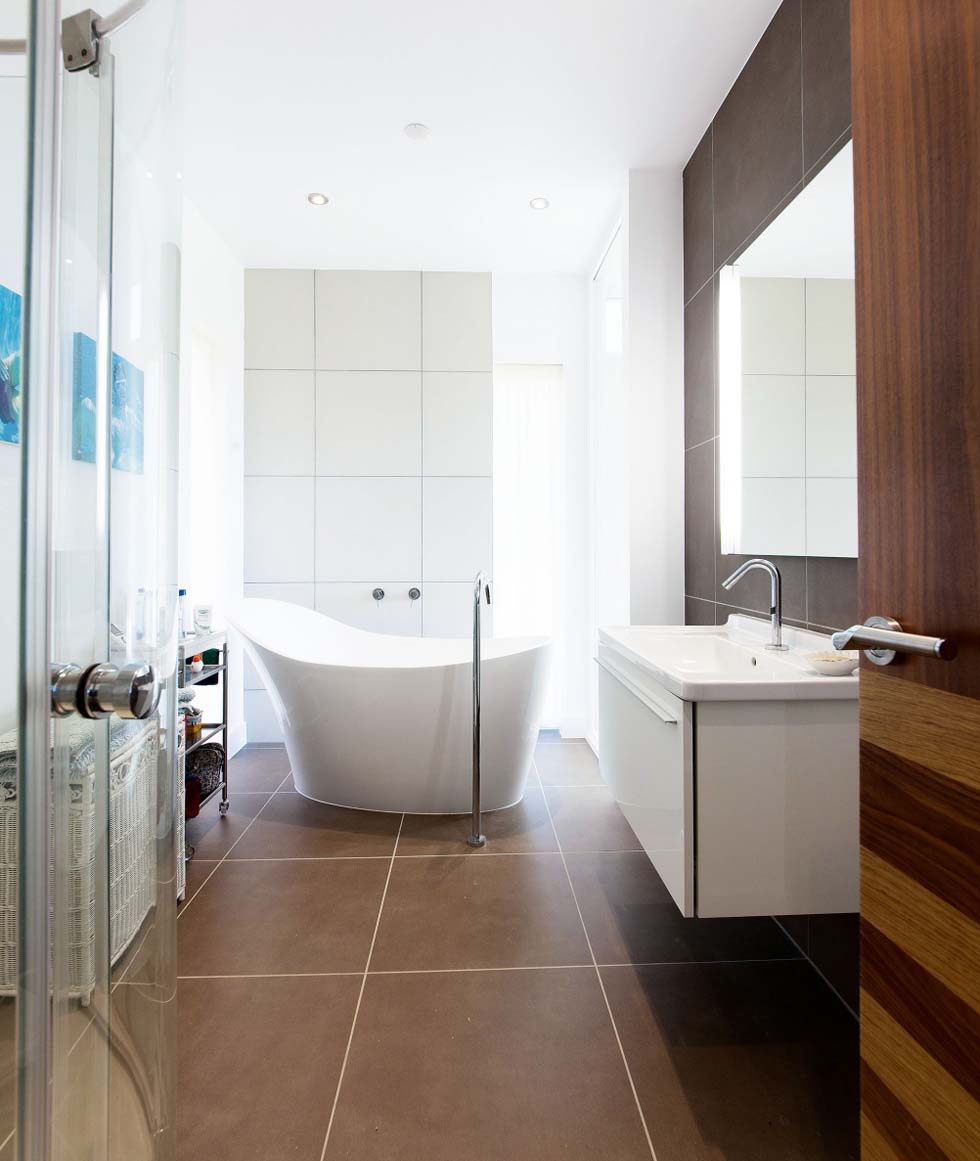 Four steel posts hold up the roof on the loch side, while internally it rests on a masonry retaining wall — it’s an awe-inspiring mix of design and clever engineering. The roof itself is a steel frame on to which plywood, rigid insulation and another layer of plywood is placed (a bit like a structural insulated panel system, without the structure) and finished off in a single ply membrane (it’s a bit lighter than zinc). A hidden bespoke gutter is built into the edge profiles of the roof too, keeping the overall appearance very slimline.

Although the contractors had never built anything like this before, they did a fantastic job. This was in part due to the detailing in the engineering, which provided the builders with a precise set of drawings to follow.

It is this high level of design, and Ann and Mike’s willingness to embrace it, that has led to the creation of such a beautiful home — and one from which the couple can peacefully observe nature.