A Self-Build in Somerset | Homebuilding & Renovating Skip to content Jim and Becky Dyer have self built a beautiful family home in Somerset.

The house was built in a Conservation Area and an Area of Outstanding Natural Beauty and the couple have gone to great lengths to ensure that it blends with the mature landscape and captures the surrounding views. The house was the overall winner of the 2007 Homebuilding & Renovating Awards.

“It took us years to find the right site for our dream home,” says Jim Dyer, “but when we first set eyes on ‘The Trees’ we instantly knew it had been worth the long wait.”

Jim and wife, Becky, who are both architects, have overcome more than simply a long search for a plot in order to successfully realise their dream of building a new family “When we initially came across the site, it was occupied by a 1960s Modernist timber frame bungalow which had been designed by a local architect. It was actually very well designed and we initially thought to adapt it, but the more we investigated it the more unviable this became,” explains Jim.

The bungalow, down a quiet lane in a small village in the Chew Valley, was one of a couple set back from the building line as backland development – handily, closer to the spectacular views – and both Jim and Becky were in no doubt that redevelopment would be controversial. To add to the difficulty, the site was located in a Conservation Area and an Area of Outstanding Natural Beauty.

Becky explains: “We wanted to build an open plan contemporary house that would take inspiration from the site, harmonise with the mature landscape and capture the wonderful views.” Having bought the site and moved into rented accommodation nearby, and prior to the purchase of the site, Becky and Jim began smoothing the path for the impending planning application by approaching neighbours and talking over their own concerns about the redevelopment.

“One of our earliest design decisions was to try and reflect and enhance the character of the site, that is, to continue the views below the tree canopy by visually raising the house ‘off the ground’. To achieve this we needed to create an open plan area throughout the ground floor and ‘remove’ the visual barriers between internal and external space through the use of full-height wraparound glazing. The more cellular sleeping accommodation was then located ‘within the tree canopy’ and wrapped in natural timber cladding, topped by a low monopitch copper roof,” explains Becky.

“We were keen to continue the idea of a tree canopy through the use of open-joint natural timber cladding and the layering of windows and timber screens on the upper level, to allow light and shadow and visually ‘soften’ the elevation, rather than create a solid flat box,” says Jim. 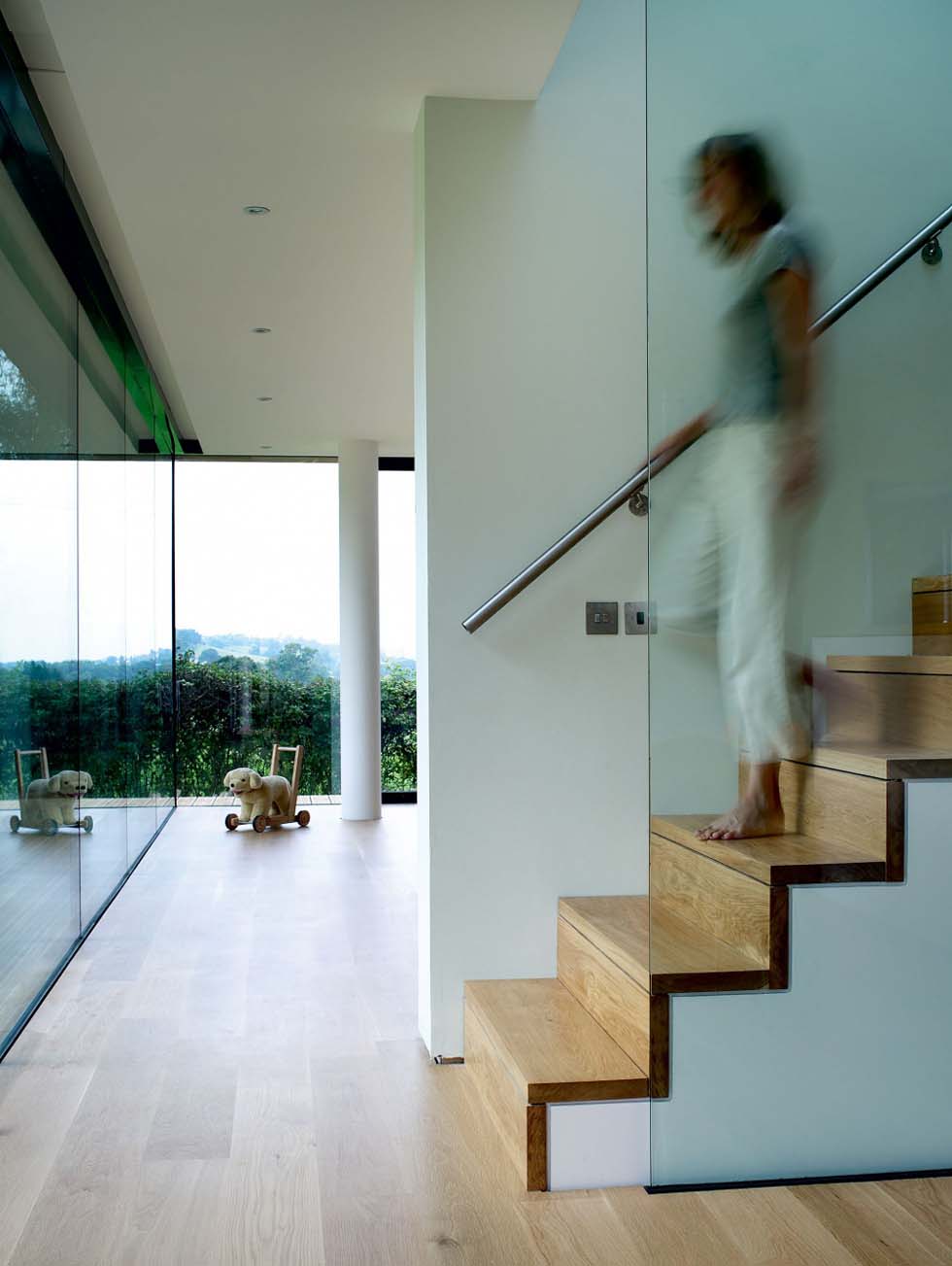 “The initial reaction of the planning office was very encouraging,” continues Jim. “Our case officer gave us a positive response and indicated that she would support our scheme, and so we continued on, making plans ready to start, occasionally keeping in contact with the planning office. However, to our horror, on the day we were about to submit our planning application, the planning office did a U-turn and advised that they would only accept a traditional two storey house on the site. We were devastated, particularly as we were so far down the line.

We believed that this decision was at odds with planning policy and we were prepared to go to appeal, but thankfully we managed to have the application taken to the planning committee after appealing to our wonderful local ward councillor. We lobbied hard and, thankfully, the committee granted approval despite the planning office’s objections. It was a huge emotional roller coaster!” recalls Jim.

Planning finally negotiated, Jim and Becky completed the purchase of the site and put the drawings out to tender, to local main contractors. Unfortunately – perhaps owing to the unusual nature of the design and the volume of construction details issued, thinks Jim – the quotes came back catastrophically out of their price range. “At that stage we had to take a deep breath,” explains Becky. “We could still have pulled out of the whole thing and sold the bungalow on with planning permission for redevelopment, but we had fought long and hard and were determined that we wanted this to be our family home. We decided that the only way we could get this thing built was to take over the project management duties and do most of the low-skill trades ourselves.” This was all the more difficult as Jim was now between jobs and Becky had just given birth to their second child, Tom.

“Acting as main contractors had its moments,” says Jim, “but it did enable us to keep a close eye on day-today developments on site which, in a project of this sort which requires high-quality finishing in the details, was critical. We found that the most difficult thing was dealing with subcontractors, several of whom seemed to operate to their own rules and time frames. Dealing with each trade directly and buying all the materials ourselves rather than through a main contractor certainly made the whole process more stressful, but financially we couldn’t have done it any other way,” explains Becky.

The works were at first fix stage when Jim returned to full-time work and Becky then took over the day-to-day project management duties. “It was particularly difficult to come home from work each day and have to go up to the house and work into the night,” recalls Jim.

Three months on from completion, it’s difficult to imagine this immensely tranquil home being the scene of any possible disruption. It would have been very easy to build a statement house here – something that tries to show itself off rather than make the most of its beautiful location. Becky and Jim’s decision to clad the upper storey of the house in western red cedar rather than the more obvious Modernist’s choice of a stark white render is a masterstroke. Materially and aesthetically it is perfectly suited to the natural spirit of this glorious home. The first floor windows benefit from sliding screens which are designed to both help keep the sun out but also to let the cedar motif continue uninterrupted.

As much as the house is designed to be subservient to the site, however, it also makes the most of it. The wall-to-wall glazing at ground floor level by Prism Architectural Glazing would not have been possible on a site that wasn’t so well secluded by trees and in such a favourable position away from neighbouring windows. 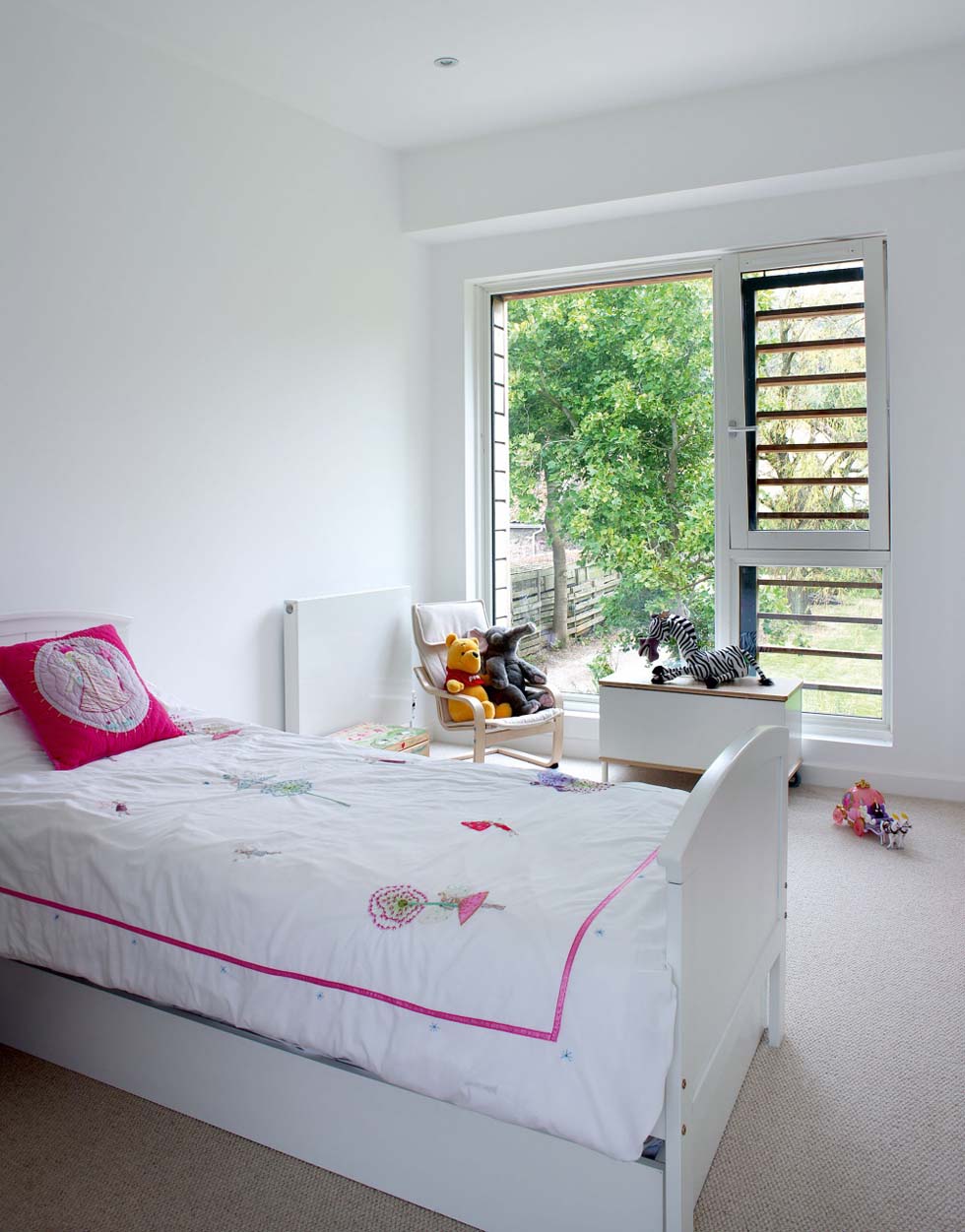 Inside, the clean lines and minimalist furnishings fit perfectly with the simple approach of the exterior. There is a clear flow between rooms and despite being open plan, a sense that the rooms do not totally overwhelm the young family that lives here. A beautiful floating staircase of solid oak has been created by a talented local carpenter called Phil Clarke – who also made the louvered screens on the exterior – and leads up to the first floor landing where a clever long, thin window follows the corridor at eye level to the bedrooms and office, meaning that light can enter this more exposed, northerly side of the house but minimising heat loss and privacy issues.

One of the most impressive elements of this project is not just the way that Jim and Becky have overcome the hurdles placed in their path, or that they have achieved their dream of a contemporary house that is so sensitive to the natural beauty of its secluded site – but that, while the very best contemporary homes tend to cost considerably more than their traditional equivalents, their total cost of under £270,000, working out at £1,200/m², is pretty much bang on the money. Considering the amount of specialist work that went into this, and the truly unique nature of the scheme, that’s some achievement.

The Trees is something special because it sets a new standard for contemporary homes. It’s not, for a start, slavish in its adherence to rigid design guidelines set out as standard fits – this is a truly unique, bespoke, and most importantly, thoughtful solution to a unique and charming site. It’s a busy family home with all the trappings of young children barging around – but it’s also immensely stylish. Most of all, though, it’s everything that the average contemporary house isn’t – it’s natural, soft, sensitive and understated; it’s good value; it’s respectful and earthy. And that’s why it’s our best new home of 2008.