A Self Build for Retirement | Homebuilding & Renovating Skip to content James and Diana France had very definite views about building a retirement home in the large garden of their listed 16th century house. If it were to happen, they always insisted the new house would have to be contemporary in style, designed around their huge collection of books, and retain, undisturbed, as much of their beloved garden as possible.

They have succeeded on all three counts. Their new timber and steel framed home has a highly contemporary feel, is extremely site-specific, and the ‘parterre and laburnum walk’ of their previous garden remains wonderfully intact.

“We were extremely fortunate to be able to move into a new house with a fully mature garden, but this was terribly important to us,” says Diana, an enthusiastic gardener and cook.

For James, a mediaeval historian, the crowning glory of the new house is the steel walkway that runs parallel to the first floor library. Although retired from his previous job, he has just published a third book on his prime area of expertise — the Cistercians.

The walkway culminates in space for a study desk with a small oriel window above which overlooks the approach to the house and adds an interesting exterior feature. It is just one of many details which reveal how the house has been precisely designed and tailored to the Frances’ way of life by their architect, son-in-law Paul Clark. 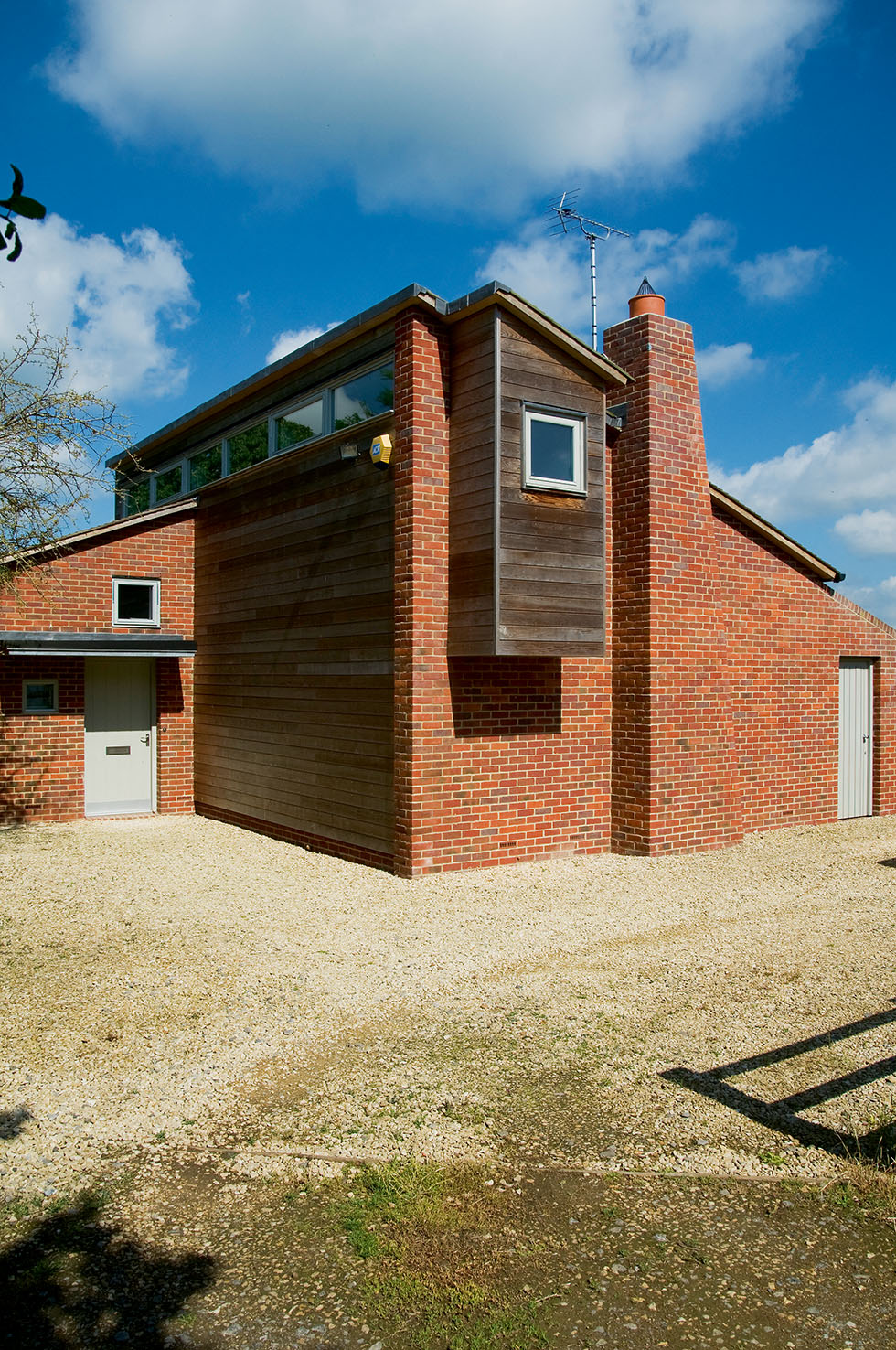 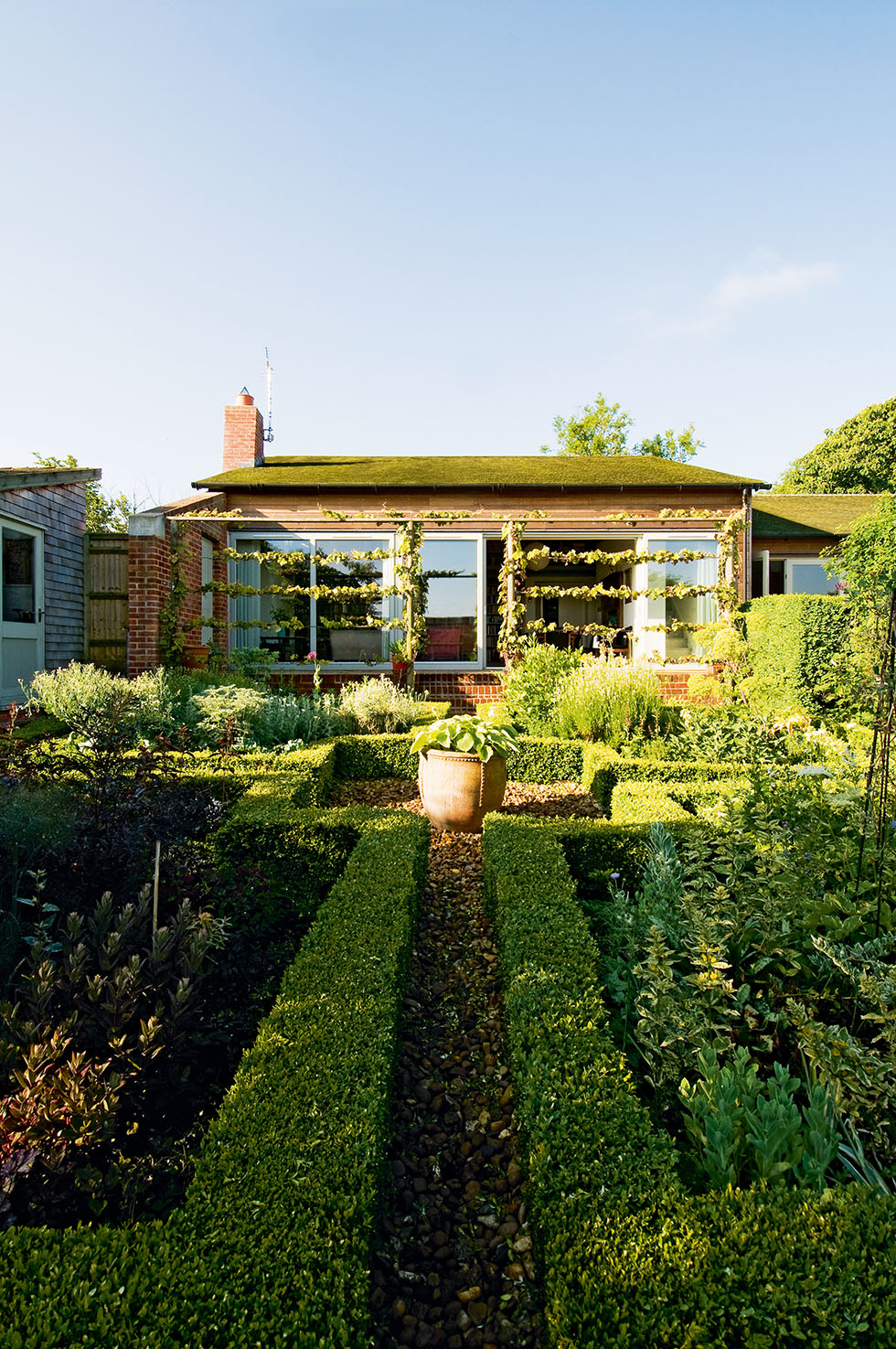 “Paul had a pretty good idea of our lifestyle and how we use a house, so knew exactly what we wanted,” James says. “The original concept behind building a house here was my idea and dates from eight years ago when we had a marquee – on the site of what is now the house – for the wedding reception after Paul married our daughter Lydia.

“We realised that employing one’s son-in-law in this way can be a bit of a risk. If it had not worked out it could have been rather unfortunate. On the other hand, we couldn’t really have employed anyone else! Fortunately Paul was very much on our wavelength, and it all worked out extremely well.” 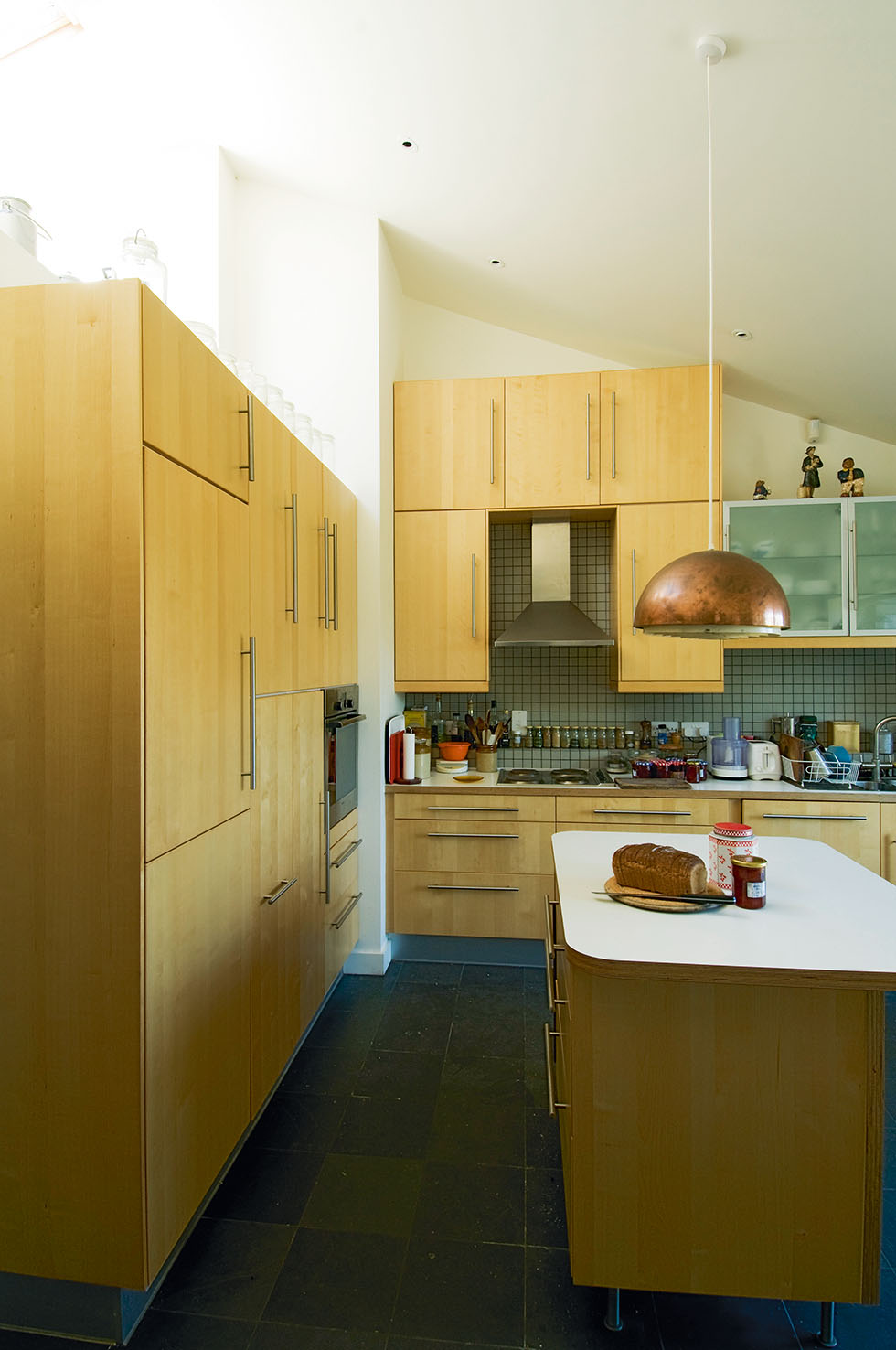 The project was, however, a complex one. Getting drainage to the sloping site was difficult, and there were considerable problems with access. The site is adjacent to a listed building (the Frances’ former house) situated in a village Conservation Area and also lies within an Area of Outstanding Natural Beauty (AONB). Together with the constraints of maintaining their garden, everything pointed towards an expensive build on a difficult sloping site. 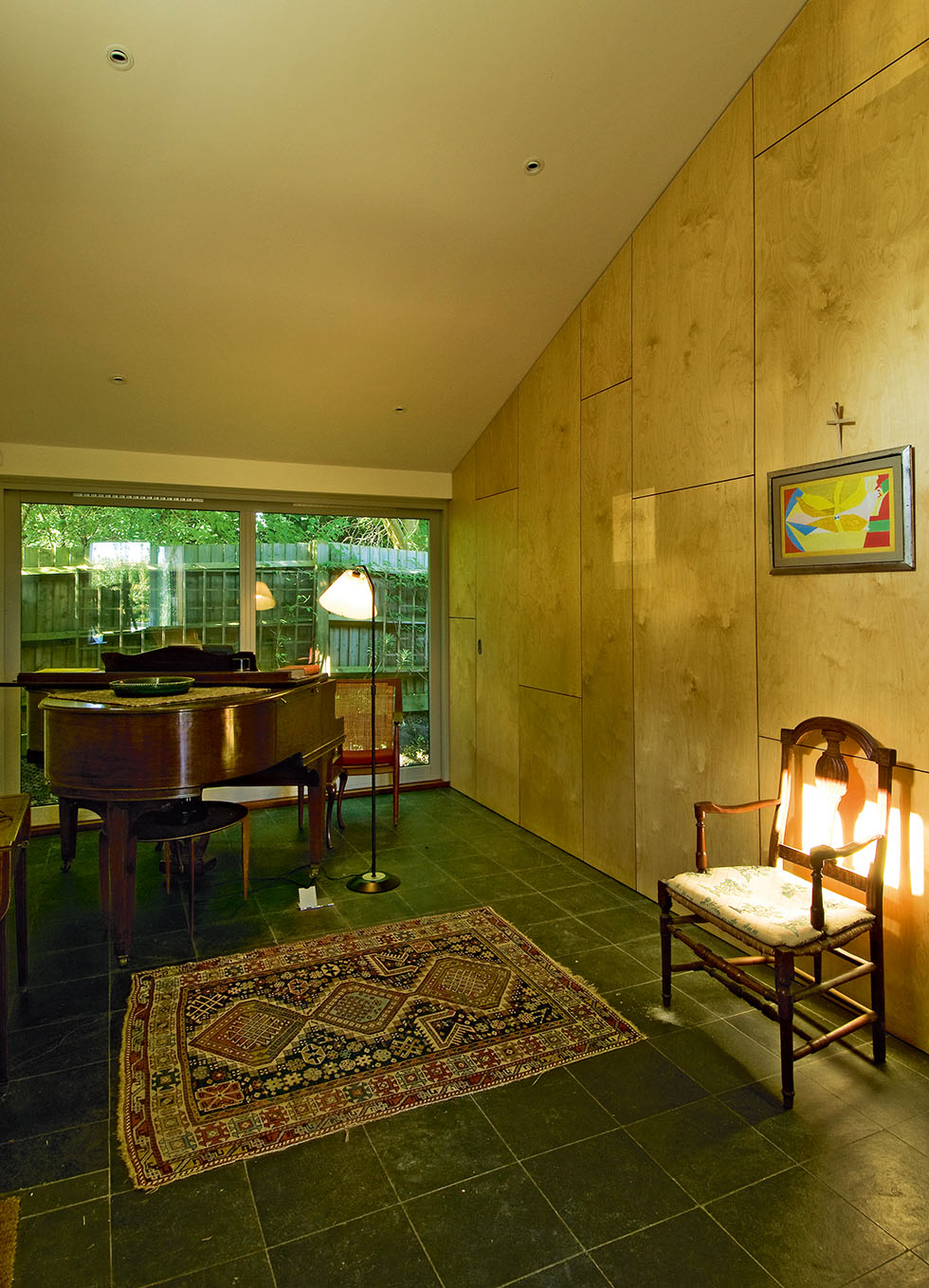 Despite adhereing to the planning guidelines, which demanded a single storey building, gaining permission was a fraught process. Their plans gained the approval of the conservation officer and his fellow planning officials, but met with opposition from the parish council. The result: a full planning committee meeting, which passed by a single vote.

The house that eventually won planning approval is built from a steel and timber frame with a series of monopitch roofs, all with a pitch of 20°. After competitive tender, the Frances and Paul chose a well-established Oxford-based builder, who created the frame in situ. James and Diana chose timber frame on Paul’s recommendation.

“It was the obvious solution for an edge-of-the-village site and for a contemporary house which was designed to feature sustainable materials,” Paul says. “We also felt the choice of cedar cladding to contrast with the areas of brick wall would weather well and look really good in a comparatively short space of time.” The same argument applied to the choice of lightweight North American cedar shingles as a roofing material — which have now mellowed to complement the mature garden. 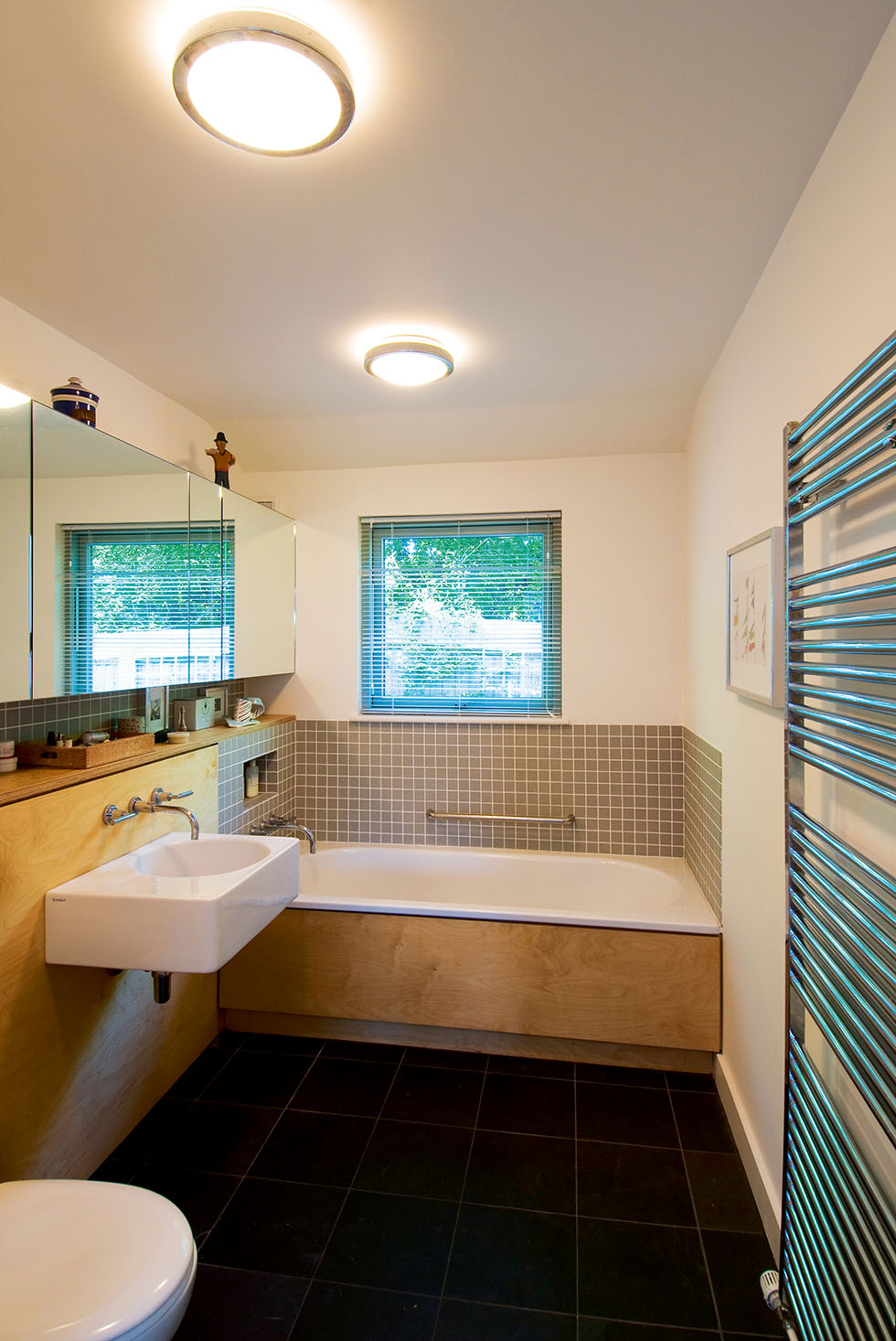 From the onset, the main design problem for Paul was the building’s north-facing aspect. “Our previous house faced south at the rear. We looked up the slope to the surrounding fields, but at times it became far too hot,” Diana says. “Having a north-facing rear in the new house meant we have had to install extra glazing to meet Building Regulations, but we find there are very few disadvantages. Nevertheless, Paul had to think hard to get light into the building from the south.”

In the main living area, Paul has designed in a ribbon of clerestory windows set on the south side of the dual monopitch roof. “Two of the windows open at the push of a button and bring in welcome ventilation when we need it,” says James. Along the rear of the house is a long terrace, accessed from both the main living space and the kitchen by sliding doors, which bring in further natural light.

“Paul has done a wonderful job importing light,” says Diana. “After so many years facing the reverse direction, in many ways we prefer facing north towards the garden. This is because we sometimes used to get overheated when sitting at the rear of the old house, particularly when we were in the sunroom. We prefer it on the terrace here. It is a long terrace and it is possible to move along it to different parts to follow the sun. It was quite hot enough for us last summer.” 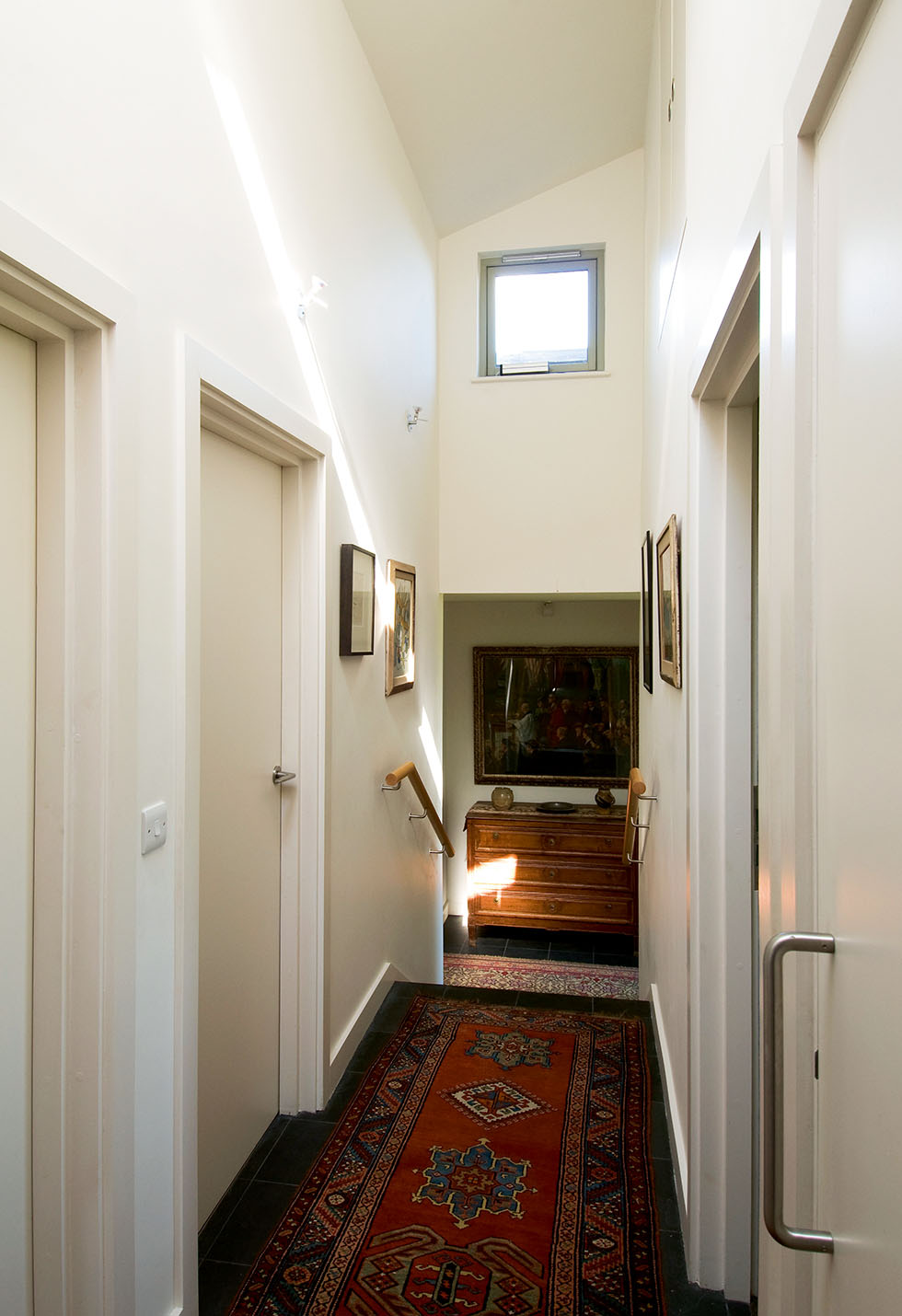 The front of the house faces east, and the front door leads to a spine corridor, which provides access to the bathroom, TV room and a bedroom. As a retirement home – both James and Diana are in their seventies – the house is also, as far as possible, designed across ground floor level. However, the en suite master bedroom and a further bedroom are both down a flight of five steps to take account of the sloping site. Both rooms are lit from either side by full-height plain windows.

“The whole idea was to have a large living/dining room, which, with the two storey bookcase and our elaborately carved 17th century Danish storage cupboard, would form the focal point. The other rooms are deliberately small,” comments James. The book gallery is reached by a hidden staircase. This is concealed behind a recess specially created to house the cupboard – a family heirloom – which was originally designed to be built into a wall and had been somewhat hidden in a dark corner of the old house. There is storage beneath the staircase, and at the point you pass beneath it to reach the kitchen from the dining area, there are further built-in units.

“You could say Paul has designed the house entirely around us,” reflects Diana. “He measured all the key items of furniture we wished to bring with us, and even the hallway was designed specifically to take my baby grand piano. This way we have also made the most of our paintings. You might call it ‘purpose designing’.” 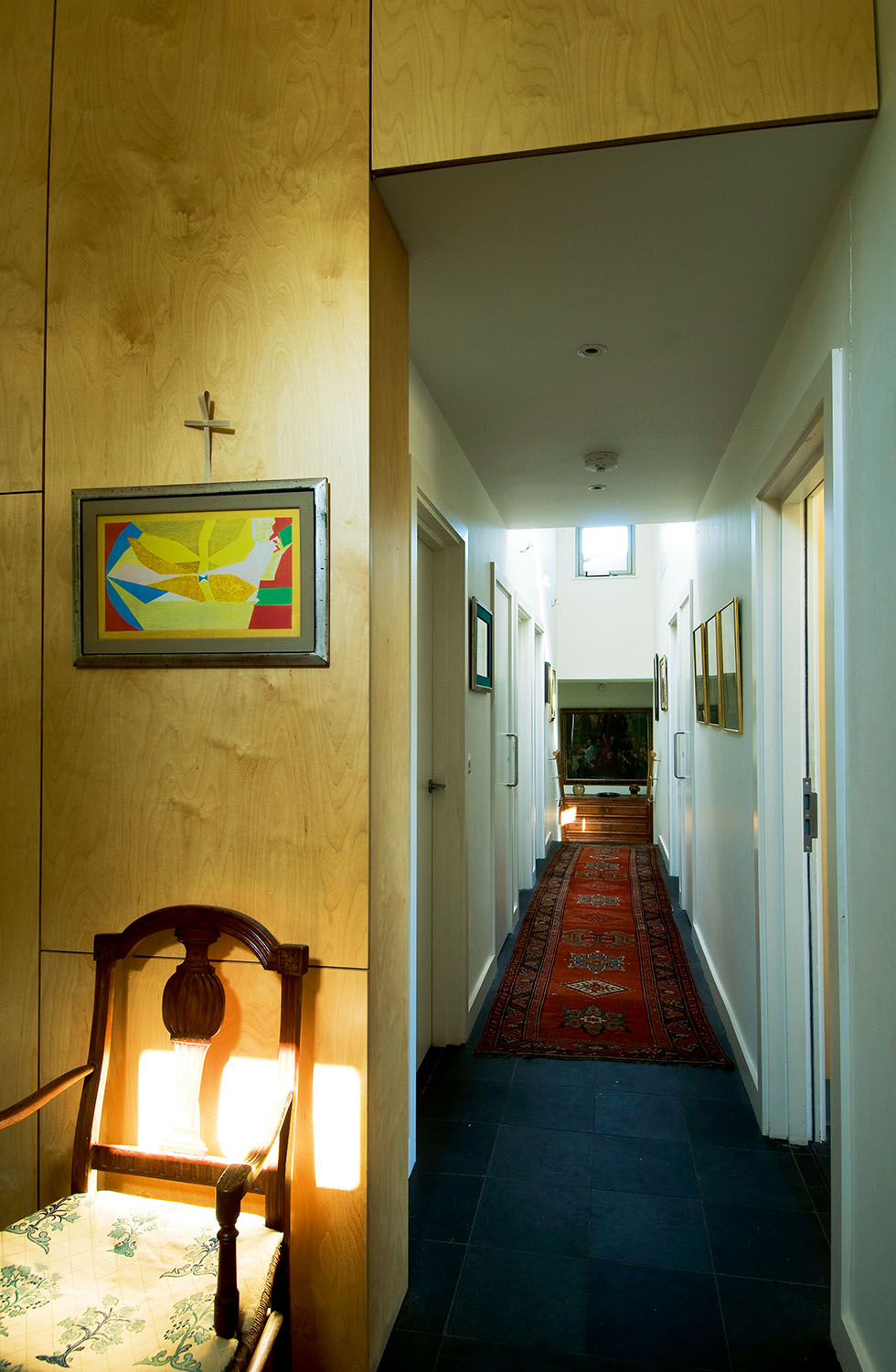 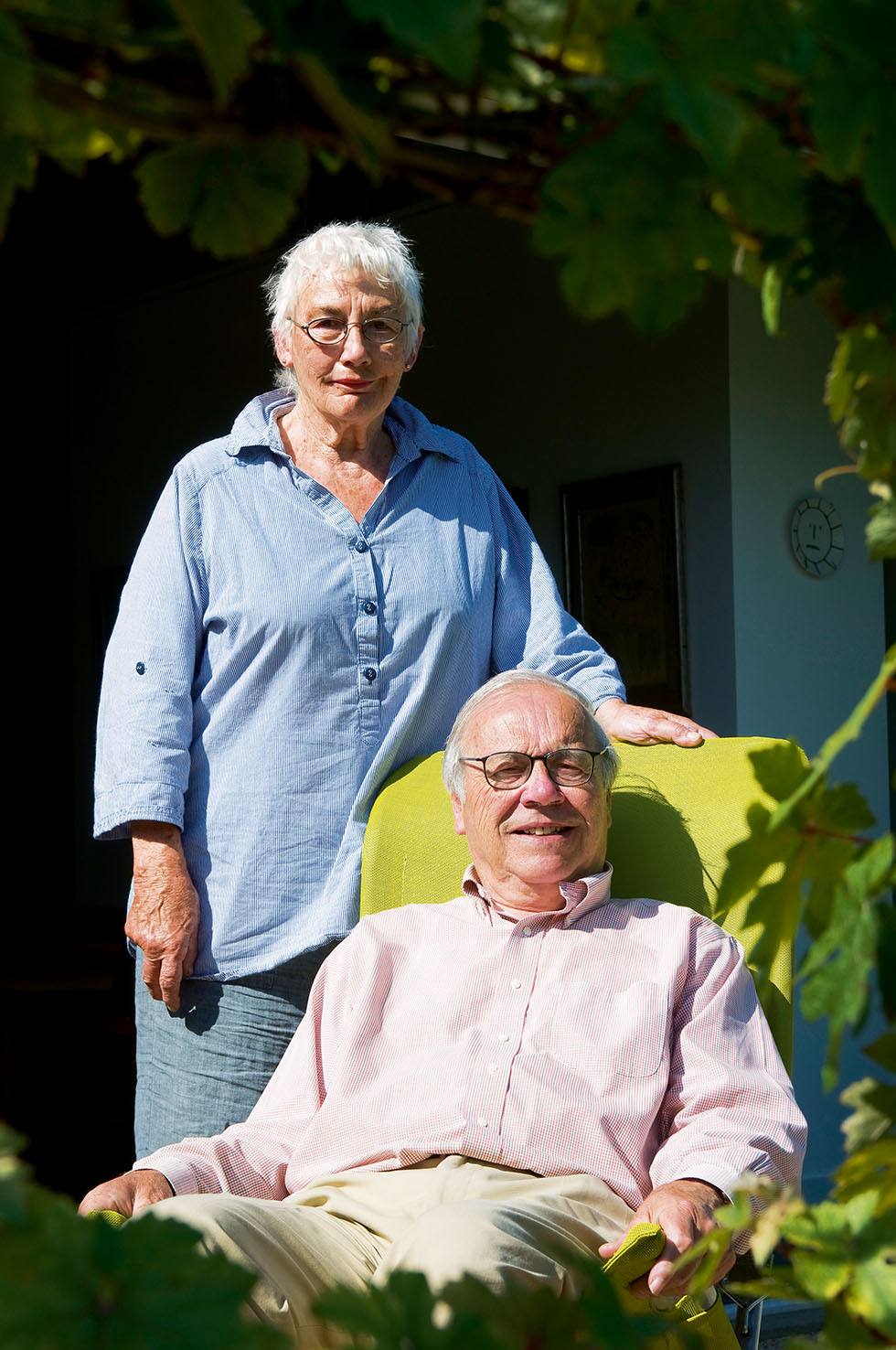 Paul has also designed an outbuilding clad in cedar with an identical roof pitch to the house. Although it is separated from the house, it appears, from a distance, to continue the line of the roof. It is home to Diana’s potting shed, plus a workshop fully equipped for James’ principal hobby, bookbinding.

Despite the opposition from parish councillors, the project won a commendation for good design in the 2006 Vale of White Horse District Council Design Awards. “It’s all quite divine,” says Diana. “We loved the old house, but being situated on the main road through the village, it was dusty and noisy. We far prefer underfloor heating to storage radiators and can still have an open fire in the chimneypiece Paul has designed for us in the main living area.

“Sometimes the old house was a bit dark and unwelcoming when we returned after a trip overseas, but the new house is quite the reverse. Despite quite a few misgivings at the outset we have not had to downsize to an unacceptable degree. It has all worked out extremely well.”