A Self Build Cottage | Homebuilding & Renovating Skip to content When Bob Bull and Edith Wellman decided to buy a two bedroom holiday home in the sleepy riverside village of Dittisham, the property was already well known to Bob, who had previously owned and sold it on ten years earlier. “I was living full time in the Midlands and my family had always enjoyed holidaying in Devon, so we thought it would be fun to own somewhere so close to the water,” he recalls. “I first bought the tiny building back in 1984 mainly because, at £23,000, it was the only property I could afford in the area.”

The lean-to outbuilding contained one large room with a small kitchen and bathroom tacked onto the side. Situated at the end of a terrace of cottages and built into the hillside at the rear, the single storey structure had previously been used for a number of purposes, including a cider store and a doctor’s surgery.

“We did some work to the building and took out the ceiling to create a vaulted space so that we could add a mezzanine sleeping platform,” says Bob. “Two years after we bought the place we decided to sell up, though, because my sons were keen to holiday elsewhere. They later regretted the decision, but we received double what we’d paid for the property.” 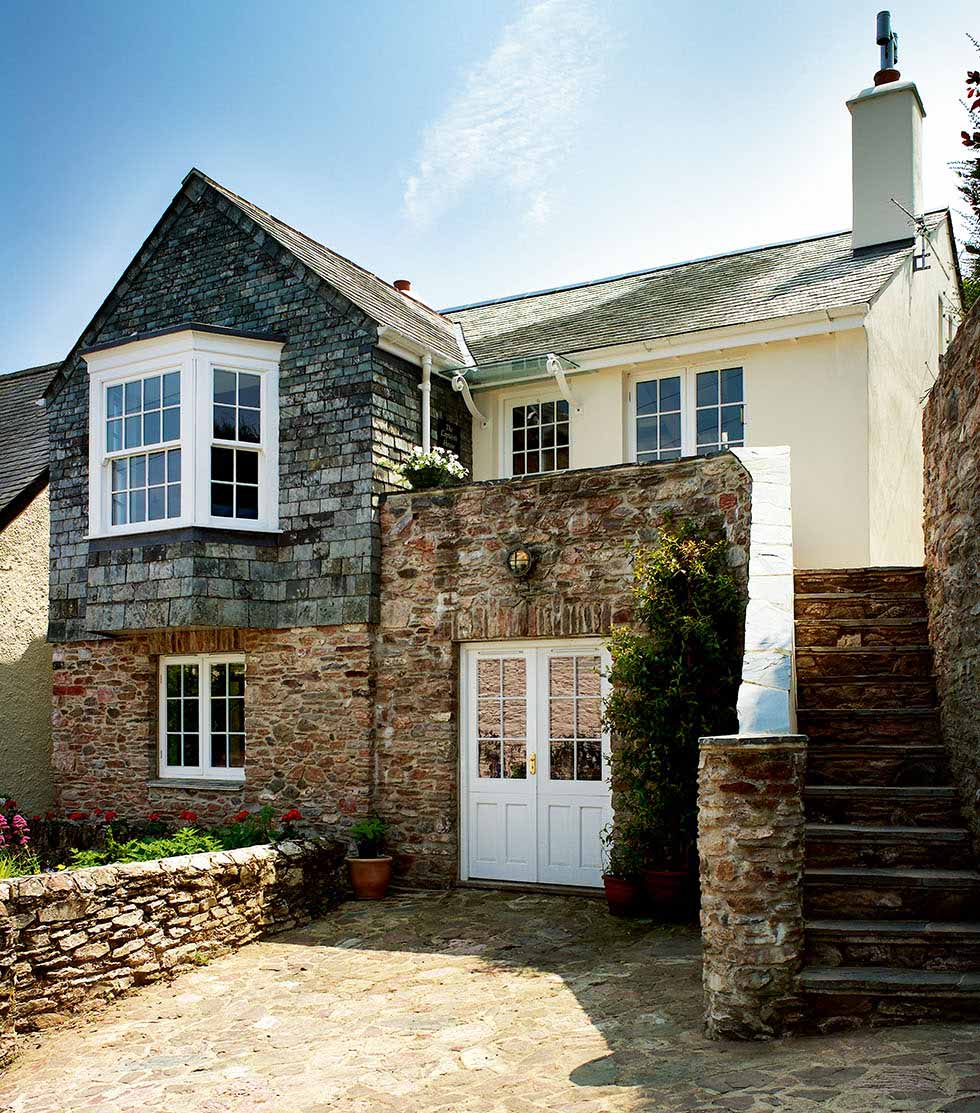 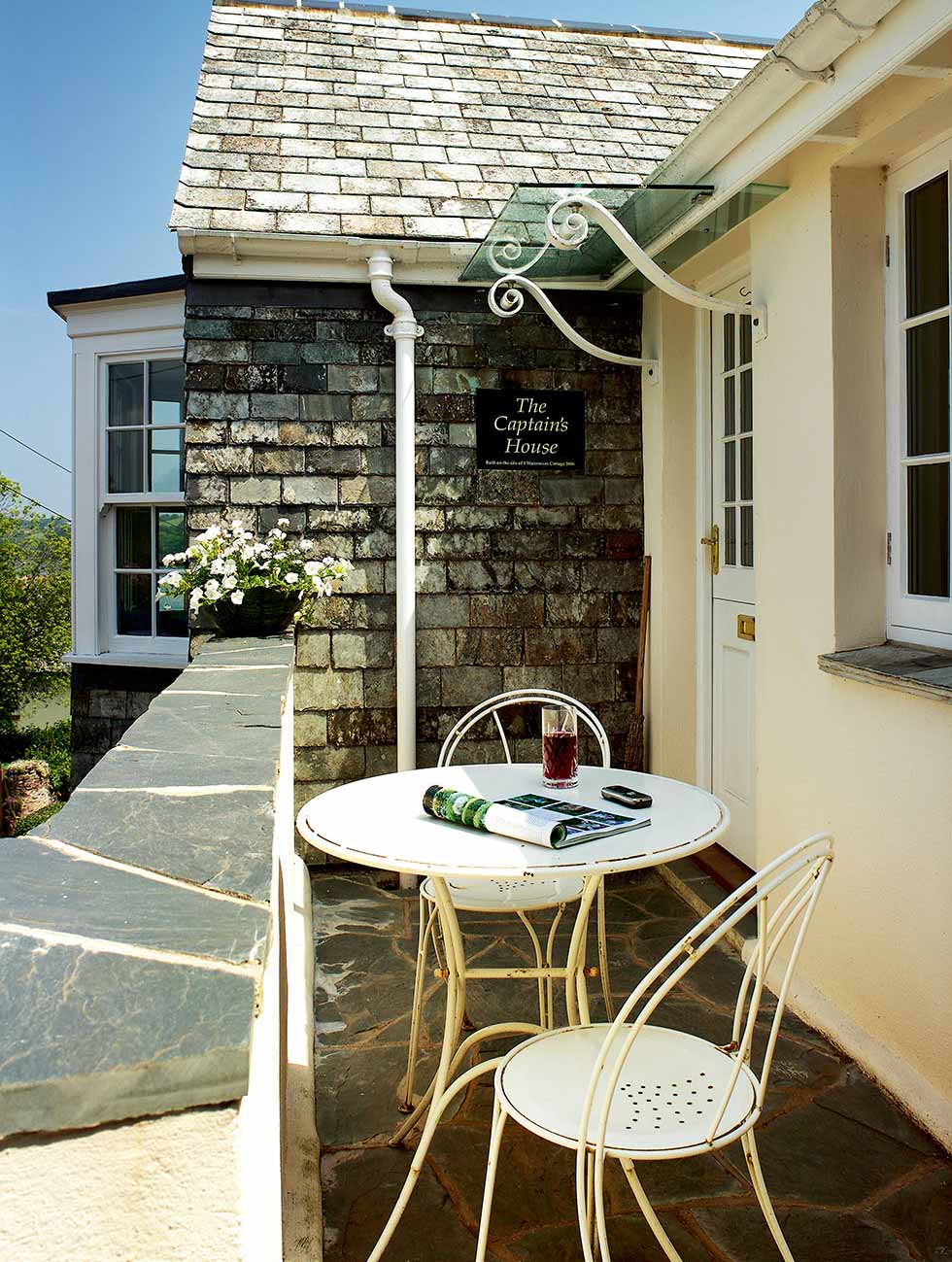 Bob and his wife later divorced, and ten years on he and now partner Edith were staying in Devon with some friends and happened upon the tiny cottage in Dittisham, which by then had been further extended upwards and outwards, with a new entrance porch and dormer windows serving two first floor bedrooms. “It was for sale, but we didn’t immediately decide to buy it,” Bob recalls. “Once we were back in the Midlands, though, it seemed like a good idea to put in an offer. We thought it would make a lovely holiday property, but at that stage we still weren’t considering making it our permanent home.”

In 1996 Bob and Edith bought the cottage for £75,000 and began making it their own — laying a new stone floor, changing the bathroom into a ground floor wetroom and fitting a 1920s cast iron woodburner. The couple own a small sailing boat which they use regularly to travel down the river to Dartmouth, and thoroughly enjoyed the relaxed pace of life. For this reason, with Bob approaching retirement from his profession as an insurance broker, they took the decision to make the cottage their permanent home. 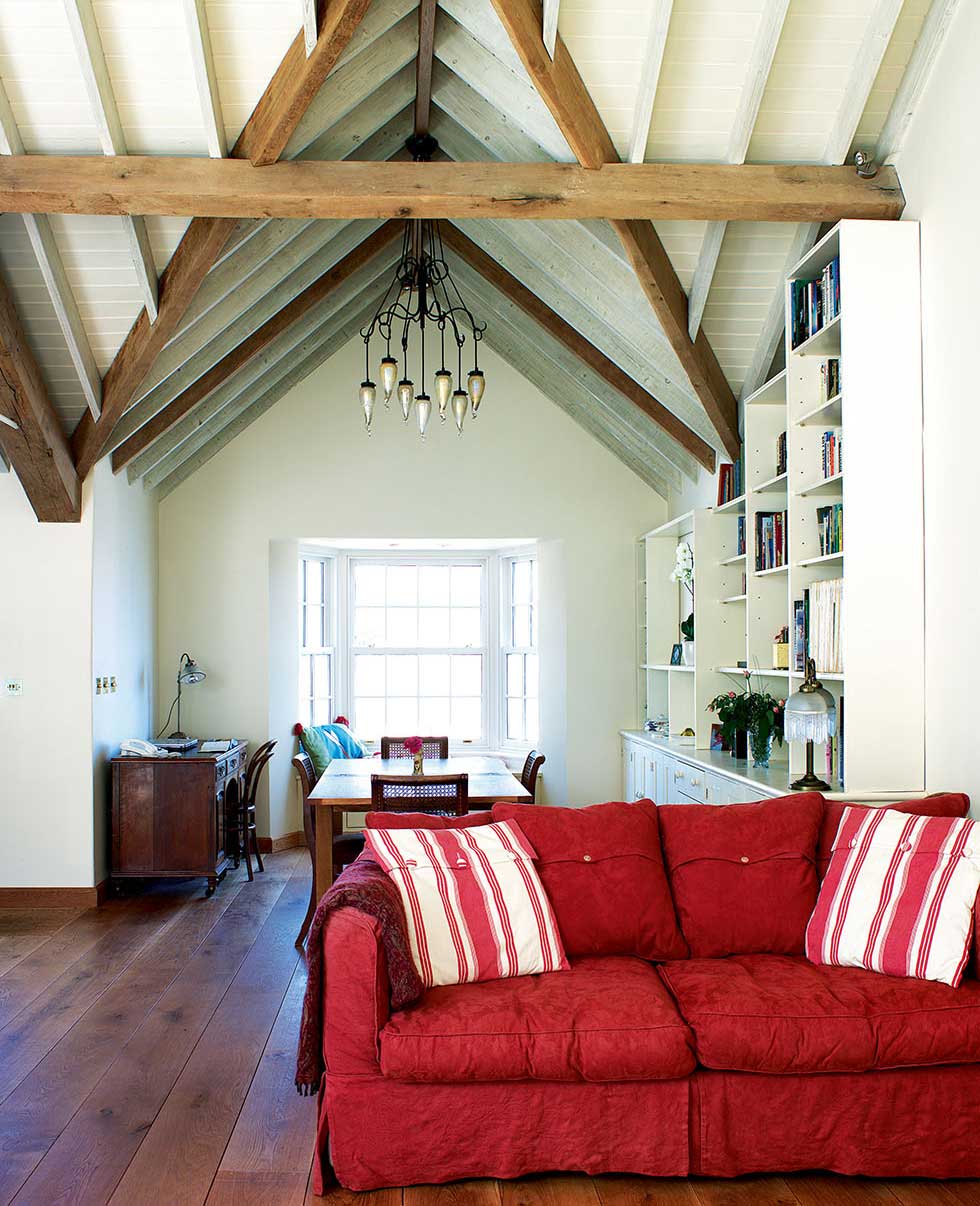 “We’d managed to acquire an overgrown piece of garden from one of the neighbours, and dug out the bank to create rear access,” Edith, a sales executive, explains. “At first we planned to extend the existing building to gain more living space, and an architect sketched some plans for us. Later we decided that it would actually be easier to knock down the old house and start again with a brand new build.” Edith and Bob engaged an architect friend to design them a replacement, and took the plans to the neighbours living directly opposite the site to ask for their comments and ideas. Little did they realise that this act of courtesy would result in a radical rethink of the entire design.

“The neighbour, John Pusey, was a house designer, and he came back after the weekend with his own suggestions, which were far more in keeping with the other traditional listed buildings in the road,” Bob says. “From that moment on we employed John as our project architect, and he helped us submit the planning application and then went on to oversee the build. He designed everything from the windows to the kitchen in minute detail, so we were very lucky to find him.” 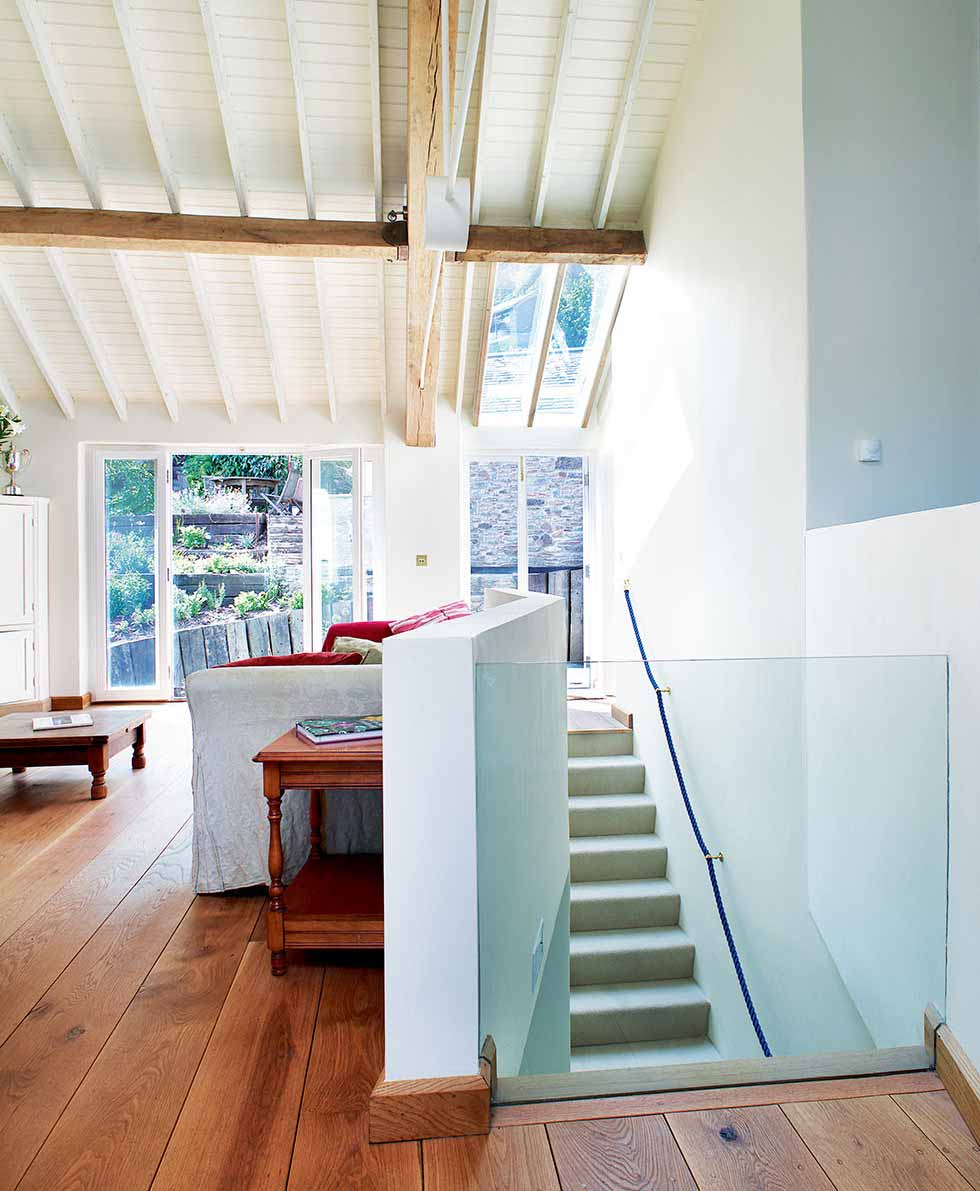 Externally, the front of the new blockwork cottage is clad in a combination of white-painted render, Delabole slate shingles and stone — which was reclaimed from the previous building on the site. Delabole slate laid in diminishing courses was also selected for the roof, and these natural materials – together with the small-paned sash windows – give the appearance of a much older property. In total contrast, the rear façade is of white-painted render and incorporates larger areas of glass, with glazed doors at both levels, creating a far more contemporary look. “The new design offered us the best of both worlds,” says Edith. They decided to position the main living areas upstairs to not only maximise the views, but also to create a space with a high-vaulted ceiling with exposed structural oak timbers and glazed rooflights. 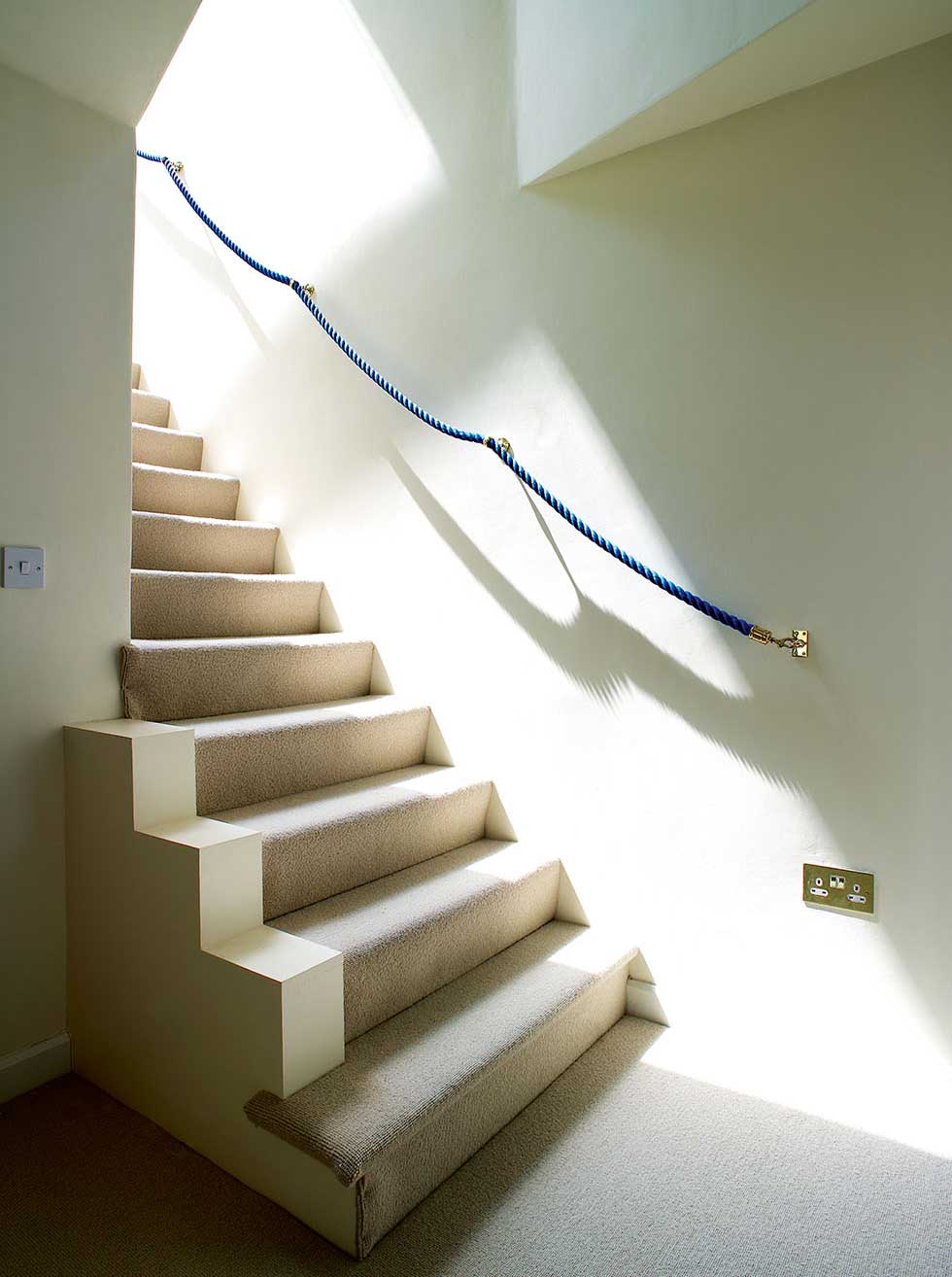 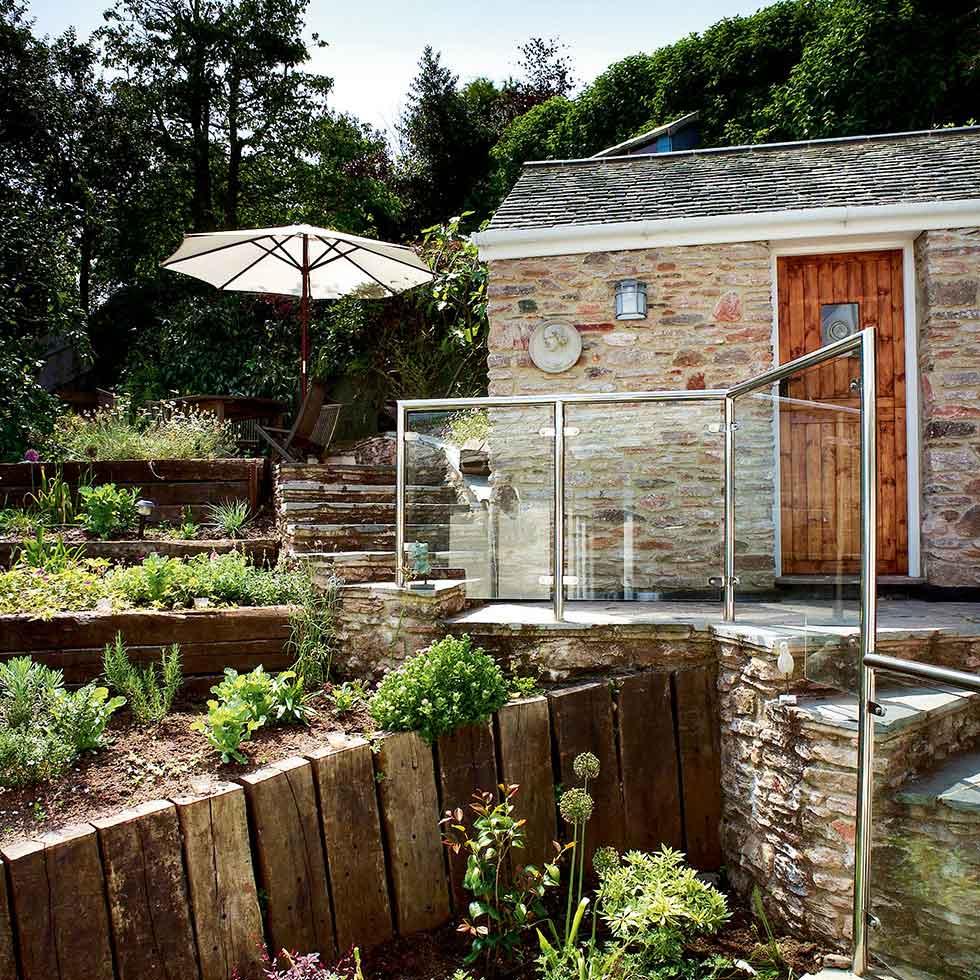 The spacious sitting/dining room has a kitchen area to one end with a cloakroom and utility room tucked beside the open plan staircase and, downstairs, the three bedrooms each have an en suite bathroom. The planners willingly approved the concept, although they insisted that the previous lean-to building should be replaced with a detached house — a factor which has slightly reduced the overall width of the property. To compensate for this loss, the new footprint stretches further back onto the site, creating an overall floor space of just under 130m².

Twenty years after Bob first purchased the original stone outbuilding, it was duly demolished and the site was cleared. Once the initial groundworks were completed, a local stonemason/general builder undertook the remainder of the project — subcontracting the carpenter, who made up all of the windows and doors as well as the bespoke kitchen.

“Everything has been designed to make the most of a really tight site,” says Bob, “and the house feels much larger inside than it actually is, due to the amount of glass and the open plan layout. Having the stairwell as part of the main living room, with a glass balustrade overlooking the staircase, tricks the eye into thinking it’s a far bigger space; the vaulted ceiling helps, too.”

Despite taking twice as long and costing far more than the couple had originally estimated, they are extremely pleased with their new home. “In hindsight, we would probably have made our bedroom on the ground floor slightly larger,” says Bob, “but other than that we’re very happy here and are enjoying a much slower pace of life.”