Chris Dyson has painstakingly restored a Georgian town house to its former glory, transforming it into an interesting combination of old and new.

It must have been a happy day for one local planner when architect Chris Dyson’s application to restore his newly acquired Georgian house arrived. Part of one of the loveliest terraces in Spitalfields, within chapati-throwing distance of Brick Lane, this remarkably elegant row of Huguenot houses was intact and original. All except for number 11: a stubby, derelict interloper that, wouldn’t you know it, was stuck right in the middle of the otherwise rather gracious sweep. The building had been festering for years, growing more and more prominent in its decrepitude — until Dyson’s proposal dropped through the letter box.

All Chris wanted was to reinstate the Georgian façade, raise the roofline to that of its neighbours and refurbish the interior – some of which is listed – with period detailing. No bold juxtapositions of historic and contemporary, no daring architectural statements — just good old-fashioned conservation. What’s more, he was proposing a live-work arrangement and public access, thus creating jobs in the area and retaining some of the dynamism of these streets, formerly used by traders and artisans. The application was rubberstamped and sent back before the ink had time to dry.

“It was a no-brainer for the planners,” shrugs Chris. “I could have spent four years arguing for a modern reinterpretation of the space, but it didn’t seem worth the risk.” 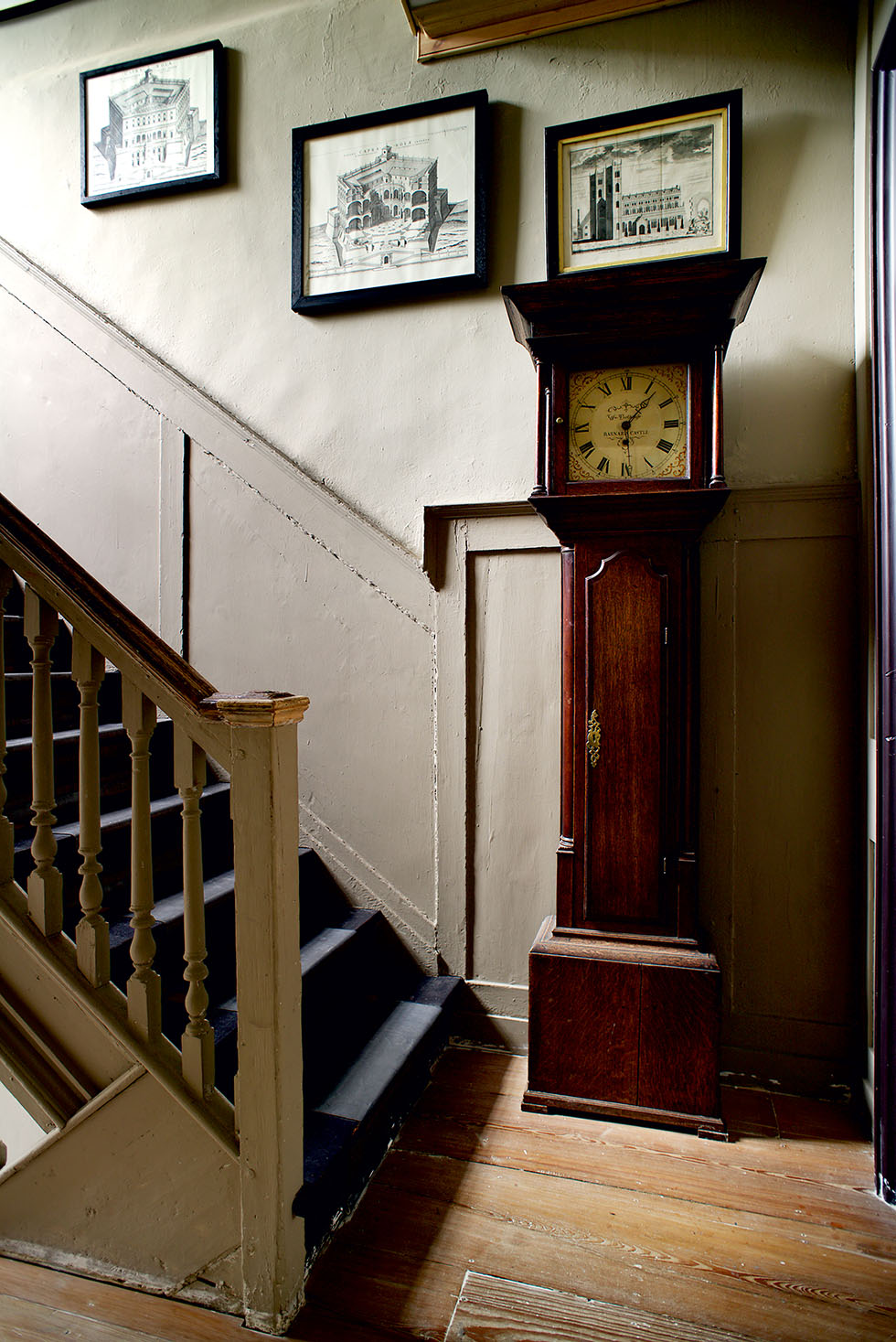 In fact, despite impeccable contemporary credentials – he worked for the late James Stirling as well as Terry Farrell before setting up his own practice a few years ago – Chris seems to have enjoyed thumbing his nose at modern architectural mores when refurbishing his home. “A lot of architecture seems to be about ego. I looked at the street and there appeared more value in the history and tradition of that than there did in making some grand statement that was all about me. I wanted to build something that was in sympathy with the other houses and respected the whole context.”

Although he had put a note through the then-empty building’s door several years earlier expressing an interest in buying the property, its owners had not responded and so Chris had bought a small industrial unit on the other side of the road, which he converted into a house. Meanwhile, number 11 mouldered and decayed as rival factions argued over who actually owned it and squatters moved in to use it as a guerrilla art space. “That was quite useful, actually,” says Chris. “I used to go to their gallery shows and so I had a pretty good idea about what state the building was in and what needed to be done to it.” 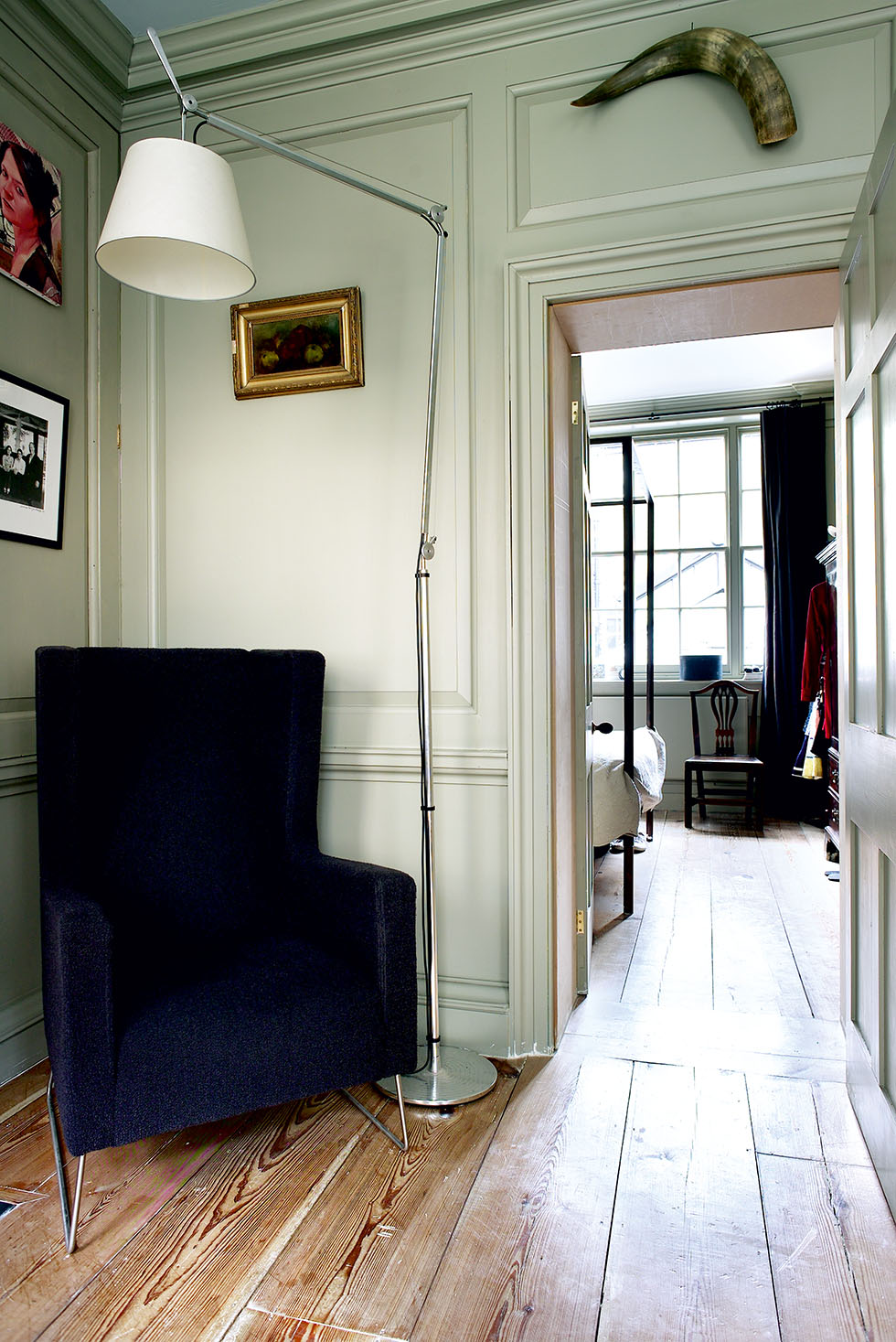 More than ten years after first popping that note through the door and entirely out of the blue, Chris received an estate agent’s letter telling him the property was now for sale and asking if he would still be interested. In that time, Spitalfields’s popularity had rocketed and, rather than being able to take the derelict building off the owners’ hands, he found himself going to sealed bids, which he won by a slender £8,000 margin.

Working out what needed to be done was easy: everything. An “enthusiastic neighbour” had gotten English Heritage to spot list the staircase which Chris describes as “useful — we used it as a starting point.” But it was the front elevation that proved trickiest. It had to be completely redesigned and rebuilt — “the best part of £100,000,” says Chris gloomily.

If you judge a restoration project on how convincingly it wears its age, then this one is flawless. You would never know that it had not stood there for more than 200 years, despite the use of modern bricks – artificially aged with a mixture of soot, bitumen and white spirit – and the relocation of the front door to provide a slightly wider and more storage-friendly hall. 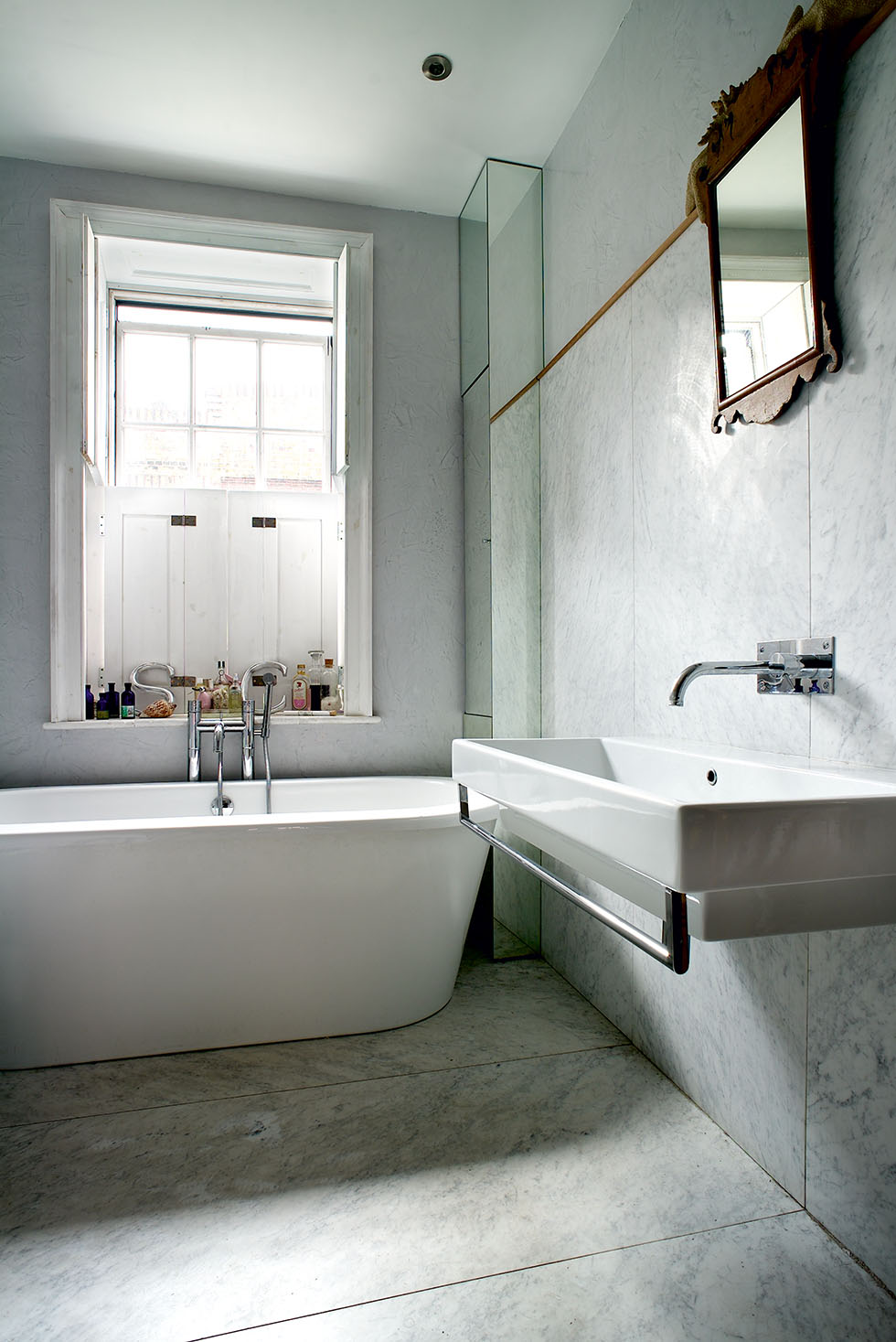 Internally, the use of the house is non-traditional. The Dysons had learned lessons from living across the road: the ground floor windows are unprotected by any garden buffer zone and are at a height that makes it a conscious act of will not to stare in as you walk past. In a supreme gesture, Chris has turned the two knockedthrough reception rooms into a fully fledged gallery space. The current exhibition features huge prints of extremely hairy and grubby pigs by a German artist; a soundtrack of barnyard grunting plays in the background and a small street-facing monitor in the window explains the works.

“It’s not very relaxing in the front room, it’s very public — I didn’t want to sit there,” he says as, not surprisingly, two passers-by peer in and point. “I didn’t feel I was giving up the room — I know a lot of artists but I’m not a curator. I just let them do their own stuff.”

So, with these two rooms spoken for and the basement converted to a self-contained flat that is rented out, Chris, his wife, Sarah, and their two teenage children are confined to the upper three floors. These comprise a formal drawing room at the front of the house on the first floor with Chris and Sarah’s room behind it; a bathroom and the children’s bedrooms on the second; and, on the top floor which is a new mansard addition, a kitchen/family room and roof terrace. 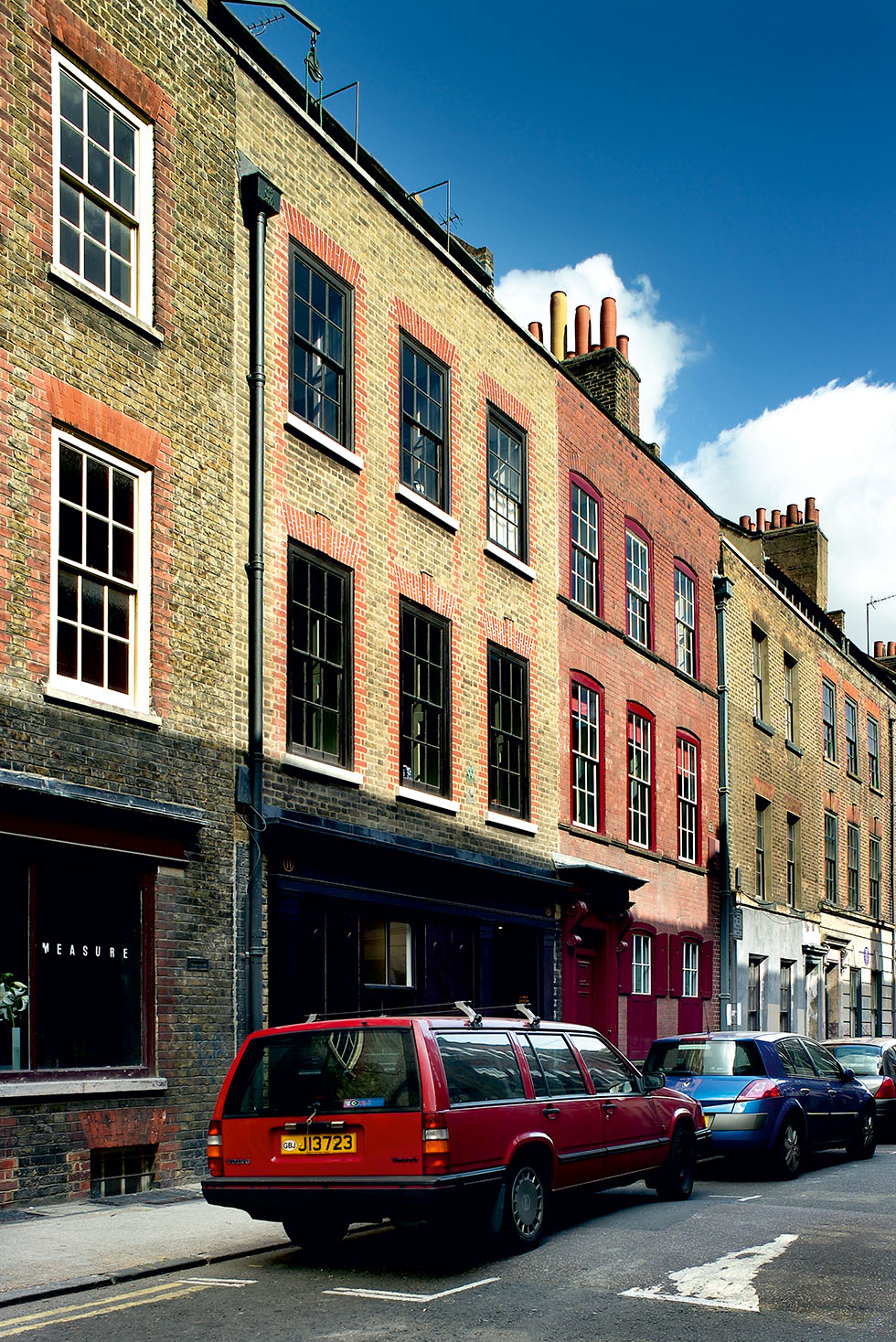 What is surprising is the contrast between the first three floors and the top one. On the lower storeys the restoration work has been impeccable: walls have been made of single-thickness wood panels as the originals, colours and tones are muted, and motifs were even borrowed from the nearby Hawksmoor church — “without being too baroque”. There is trompe l’oeil stonework in the hallway and a faux doorway. The original staircase is magnificent. True, the Dysons’ furniture is often modern, but the spirit of the place remains very much as its builders would have wanted.

And then, suddenly on the top floor, the staircase subtly changes shape and it’s all light and matt black units and polished American walnut. “There was no history here,” says Chris, “I did feel I could allow myself a freer hand.” 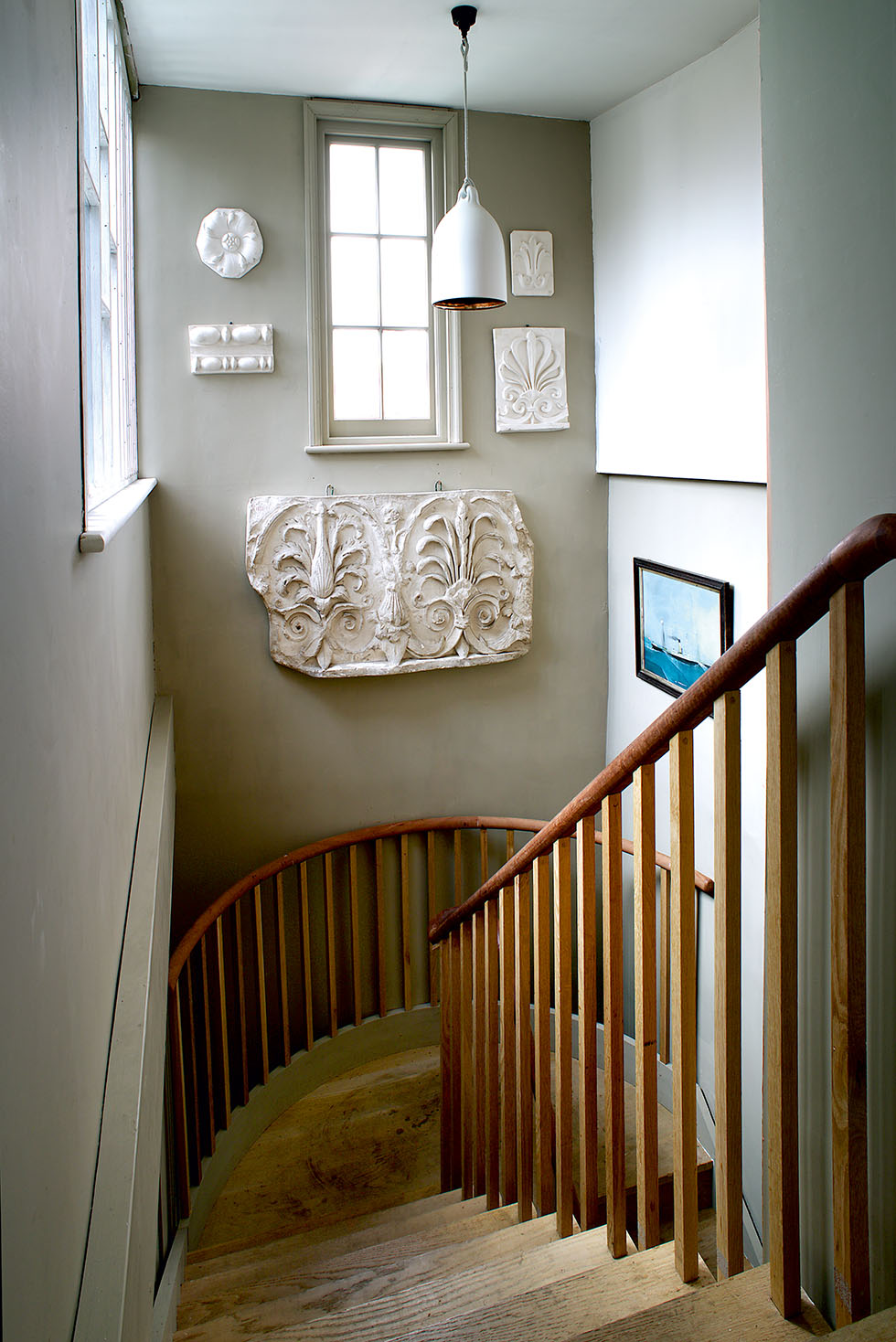 What makes the change of mood between the top floor and the rest of the living space feel dynamic rather than jarring is that the design is kept very simple. Although the house looks imposing from the street, inside it has a spare, almost Quaker, feel to it and, despite the extravagant use of expensive timber in the family room, the plain table and its benches, the unadorned surfaces and simple colour pallet do continue the spirit of the rest.

At the back of the house, across a tiny courtyard, Chris has installed his architectural practice in what looks like a landlocked boathouse. Once again, his modern instincts have won out and it is cool, white, airy and tranquil: the perfect environment in which to entertain any client wondering how an architect might bring order into their lives.

Despite its tranquillity, Chris’ office is currently being kept very busy with requests from neighbours to rework their homes and outbuildings. Let’s hope the planners continue to realise when they’re onto a good thing and keep rubber-stamping away.