With the aid of AR Design, Rob and Susie Eatwell have created a new home which embraces the best of their far-reaching views over the South Downs.

When Susie and Rob Eatwell decided to build a new home, following the loss of their daughter, they wanted to immerse themselves in a project which would provide a positive focus and mark a fresh start for themselves and their family.

It was vital that the resulting house should offer a peaceful and relaxing retreat where they could spend time both reflecting and looking to the future.

The plot they found offered what seemed like the perfect solution, situated in a prominent location overlooking the city of Winchester, with far-reaching views over the South Downs. “We’d renovated houses before, but this time we decided to find our dream plot and build something new,” says Susie, who owns a beauty salon. “There was already a three-bed 1950s house on the site, but we almost didn’t bother to look inside because we knew from the start that we would replace it.” Fortunately the couple did venture into the existing house though, because it was from the first floor bedrooms that they first realised just how extensive the impressive view was — such a sight would even go on to influence the reverse-level design of their new home. 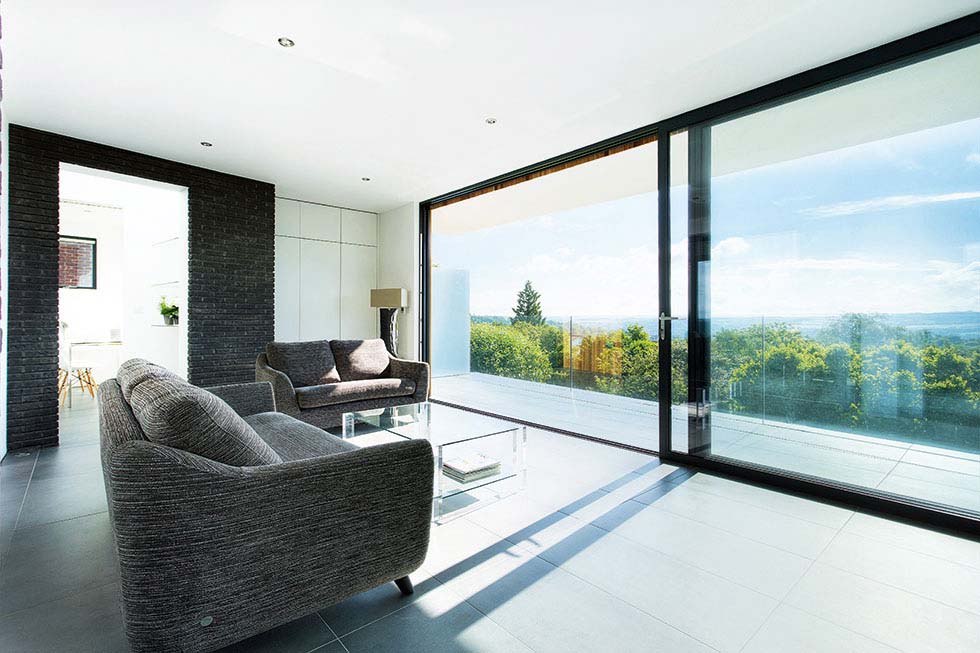 The first floor living room opens onto a balcony through sliding glass doors. Underfloor heating has been laid throughout the house beneath grey ceramic tiles

“We moved into the old house for a while and lived there during the planning process,” says Rob, who works in the internet protection sector. “We’d heard good things about local architect Andy Ramus of AR Design, and decided to approach him for ideas. Despite standing in a street of traditional houses we knew that we wanted to build a contemporary, sculptural home that would take full advantage of the views.” Not only did Andy Ramus want to design a house which would suit both the site and the Eatwells’ needs, he also undertook extensive research into the connection between architecture and health, determined to incorporate elements designed to improve wellbeing, such as natural light, air and views of nature. 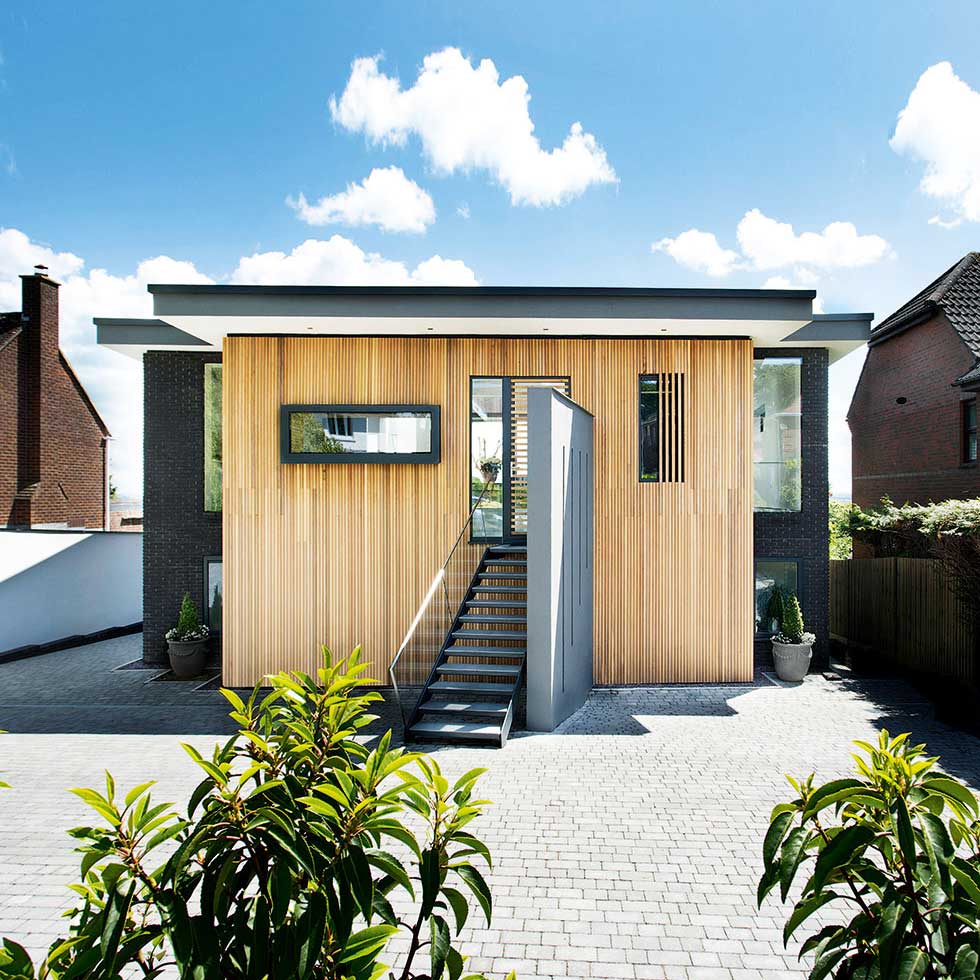 The front of the house is clad in cedar boarding, with small windows designed to obscure the interior and provide privacy. Steps leading up to the entrance door are sheltered by a wall of rendered blockwork

The resulting house is composed of four rectangular boxes topped with a flat, overhanging roof. Dark grey bricks, slim strips of cedar boarding and grey aluminium-framed windows further define the building. First floor reception rooms are arranged around a central open-air Zen garden which, together with extensive glazing and rooflights, allows natural light to permeate through the upper floor, accentuating the feeling of space. Located on the ground floor, the snug and four bedrooms are, by contrast, intentionally darker and cosier, with windows again framing views of the garden.

The simple layout helps fresh air to pervade the building, creating a connection with the outdoors which gives the house its feel-good factor. Fully glazed walls to the rear also take in far-reaching vistas of the South Downs. “The long views inspire Rob and Susie to look forward to the future, while the courtyard offers space for inward reflection,” says Andy. “It would be easy to just focus on the incredible outlook, but the courtyard brings the attention back into the house.” Initially plans for the new house were rejected as being too contemporary and too different from the neighbouring 1950s red-brick properties. Later, a virtually unanimous vote at committee saw the application approved, however. The building was even cited as a pioneer for good design in Winchester.

Rob and Susie moved out of the old house and lived in a flat nearby for the duration of the 13-month build, which was completed by local contractor Mike Jacobs. Once the 1950s house had been demolished and the plot cleared, the setting out could begin and excavation for the strip foundations then completed for the steel frame and blockwork structure, which has a single-ply membrane roof. No major issues occurred during the project, although bad weather during the winter months did delay progress at times. Sample boards were made up to test the colour of the contemporary grey bricks against dark-coloured, recessed mortar joints, and met with the full approval of the Eatwells, who enjoyed visiting the site to watch the build progressing. The same industrial grey brickwork and cedar boarding have also been used internally to emphasise the indoor-outdoor feel of the house and to maintain a simple colour palette. 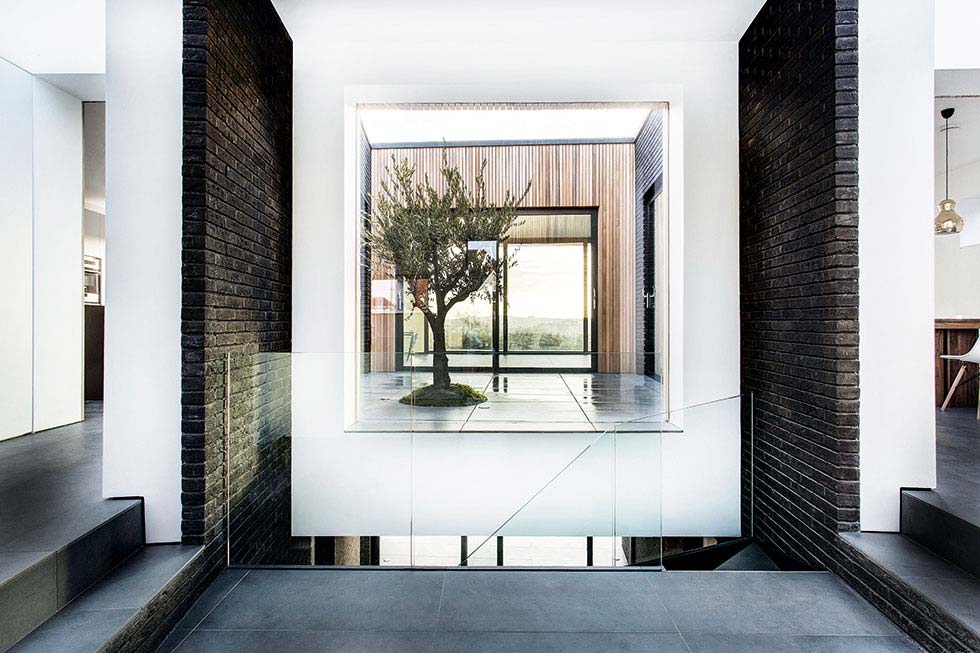 The courtyard garden, large balcony and covered patio are all designed to offer healthy outdoor living options regardless of the weather, and skylights have been positioned where the four rectangular boxes connect at first floor level. These ensure that the interior is constantly alive with light and shadow — providing a stimulating connection to the elements and bringing personality to the aptly named ‘4Views’. “The light in the house is amazing, and choosing simple, monochrome finishes helps to emphasise the features as well as creating a really relaxing atmosphere,” says Susie. “Every detail has been cleverly thought out and well made — it’s a real pleasure to spend time here.”

At the heart of 4Views stands the first floor courtyard garden where a single olive tree grows. It’s overlooked by the neighbouring kitchen, living room and dining room, each contained in separate rectangular blocks offset at rakish angles to one another, with the fourth box containing the entrance and staircase. In addition to being a beautiful focal point, this Zen garden serves a number of practical purposes — bringing light and air into the very centre of this new build house. “We were essentially given a free hand with the design, around a wish for a garden within,” says architect Andy Ramus. The olive tree in the courtyard was chosen as a species which would thrive in this environment, and was planted in a large container in order to control the roots and prevent them from damaging the fabric of the building. Around this, the floor is finished with the same large-format grey ceramic tiles used elsewhere.