After holidaying in St Ives for many years, Lesley and Paul Dadson started to think about buying a property in this picturesque town in west Cornwall, known for its artists who come for the unique light.

Having self built their main home in Taunton, however, a new project was the last thing on their minds. “But then we found this site,” says Paul. “It was the view; we felt we could do something here.”

The plot in question was a fairly tight piece of land at the end of a private no-through road, but crucially, it sits atop a hill overlooking the old town and the sweep of bay beyond. It threw up several issues, however, that needed to be resolved before Paul and Lesley could close the deal, and this process took almost a year. As is so often the case with private roads, there was uncertainty as to who was responsible for maintaining it, as well as problems regarding drainage, which crosses a neighbour’s property. Getting services up to the site also proved a headache.

With the plot secured, Paul and Lesley turned their attention to the existing planning permission and decided to resubmit plans for their own design. Despite Paul’s career as a conservation officer, the couple were firm in their desire for a contemporary build. “We knew what we wanted: something very light and minimal,” says Lesley. The constraints of the site and location also meant the build had to remain compact, with a low ridge height. But there were advantages. “With no road frontage, we didn’t have to worry about copying neighbours’ styles,” says Paul.

When looking around for a suitable architect, Paul and Lesley quickly found Neil Wall from local practice Studio West Architects. “He understands contemporary design and is on our wavelength,” says Paul. Over the next three months, plans emerged for a crisp, modern single storey home with a flat roof, designed around the principle of making the view available from the living areas.

In addition to the wall of floor-to-ceiling glazing (from Velfac), rooflights and an impressive glazed corner window, from Timbertec, are positioned towards the rear wall, bringing natural light deep into the floorplan. Pocket lights, created by hiding LEDs in wall insets, create swashes of light

The unusual grey fibre-cement board cladding was an early choice in the design process, and Paul’s inspiration was a contemporary slate-hung extension to the Victorian art gallery in nearby Newlyn. “The building is gorgeous,” he says. That sharp, clean look is one he wanted to emulate. Although used frequently on agricultural and commercial buildings, their architect Neil had also previously used the product on a Grade II* listed building in the Devon town of Sidmouth.

“When Paul came across Marley Eternit’s Equitone fibre-cement boards, the aesthetic detail of the house changed,” adds Neil. “The horizontal panels informed the flat roof. This was useful both in terms of cost, but also in lowering the ridge height of the building and reducing massing.”

The slate-gray colour is reminiscent of traditional local roofs and walls, and formed an integral part of the case they presented to the local planning office, which was ultimately successful. It’s all about ‘material context’, as Paul suggests.

The fibre-cement board is low maintenance, although it was quite a challenge to get the final look right. Setting out around the windows was fairly complex and Neil had to do individual calculations for each panel. In order to eliminate fixing holes in the panels, they attached battens to the structure to which they, in turn, attached the panels using structural adhesives. 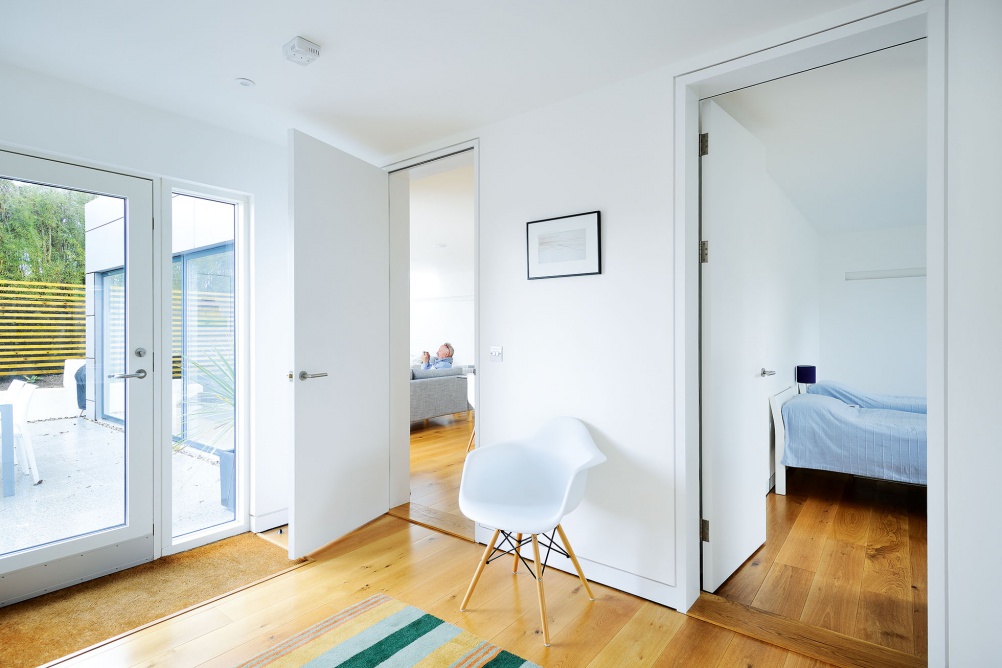 The corner where the two sides of the L-shaped design meet provided a good place to position the entrance hall — off which the living space and bedrooms (including the master bedroom, above, and main bathroom) lead. The couple decided on including a third bedroom, which replaced a planned utility, meaning the boiler and mechanical ventilation heat recovery system are now housed within cupboards in the entrance hall

Building to a Budget

The build also needed to be affordable. “The cost per square metre was fundamental,” says Paul, who set the initial budget at £143,000 for a 98m² build. Neil produced several highly detailed drawings to get ‘cost certainty’ for the project. Although this budget puts the build in the ‘affordable’ bracket, their design ambitions also meant large areas of glazing and the fibre-cement cladding had to be included in that price. (The latter cost a weighty £18,000.)

Both finishes and the contemporary style formed part of the objections made by the Town Council and neighbours. Despite this, after four months and some informal pre-application discussions, the Dadsons’ plans were passed and the contract for a main contractor put out to tender, eventually going to local firm Level Construction. “It was too far away for us to project manage ourselves,” explains Lesley.

A highly insulated timber frame was the construction system of choice. “It’s quick and provides an airtight build,” says architect Neil Wall. “I wouldn’t think of anything else, due to the standards of insulation compared to wet methods,” adds Paul. Together with Neil, the couple chose to use steels for the large spans across the sliding windows, sourced from Velfac, to the front.

The windows allow for some passive solar gain, although the property is cosy largely thanks to a gas-fired boiler supplying the underfloor heating. A mechanical ventilation heat recovery system also keeps the air fresh with low humidity (as well as passing warm air to the bedrooms).

The low-maintenance, powder-coated aluminium windows from Velfac dissect the rear elevation, exactingly positioned so as to bring light into the bedrooms and bathrooms (including the master en suite), without compromising on privacy

When it came to the interiors, the design morphed from two bedrooms to three following the couple’s decision to sacrifice the utility room, but this was compensated for by a clever use of storage space throughout. “I worked out where everything was going before the build,” adds Lesley, who also designed the kitchen. She then sourced this from Magnet, plus some quality detailing and a granite worktop. This was paired with an inexpensive but chic bespoke aluminium splashback.

The pared-back style is continued throughout the interior, with clever detailing such as shadow gaps around the doors – in place of traditional architraves – and tall, elegant internal doors. This attention to detail and careful use of space certainly gives the property a high-spec feel, which belies the eventual budget of just £160,000 (the overrun due in large part to delays in the ground works during a wet winter).

The Dadsons plan to retire to the resulting contemporary house, but for the moment enjoy it as holiday home, and also let it out for others to enjoy. “We love it here… the light and the views,” says Paul. “But I also loved the journey.”