Martin Hall and Kelly Bednarczyk’s house is, without fear of exaggeration, a truly exceptional testament to how high-quality, thoughtful design can meet well-considered, sensitive specification and result in a truly family-orientated home that is both of a human scale – the house is 240m² – and yet truly awe-inspiring.

The happy compromises that Martin and Kelly, who run the award-winning Chepstow architectural firm that takes their surnames (and who won a Daily Telegraph Homebuilding & Renovating Award a couple of years ago), contended with were the fact that this had to work as a family home and at the same time, as Martin admits: “We didn’t have a massive budget. This had to make sense for us.” If there is one lesson you should take away from this house it is that high-quality design features needn’t be an additional cost. Good spaces can be good value and the house is full of ‘ordinary’ materials being used in extraordinary ways.

“We were looking to move,” begins Martin, “and discovered agent’s details for a 1960s bungalow on a rocky, one-acre site. What we loved about it was that despite being at the bottom of the valley it got plenty of sun and the views were fantastic. The bungalow was really sold as a doer-upper but we took it on realising it could be totally transformed.”

And totally transform the plot they did. Keeping the existing house as a temporary home, Martin and Kelly managed to convince the planners to let them build a new house and reorientate it through 90° so that not only did it enjoy the views but the new rectangular form could be on an east-west axis. Martin’s theory is that while everyone is really obsessed by building houses north-south, building them across the east/west axis allows bedrooms to be positioned to enjoy the morning sun. 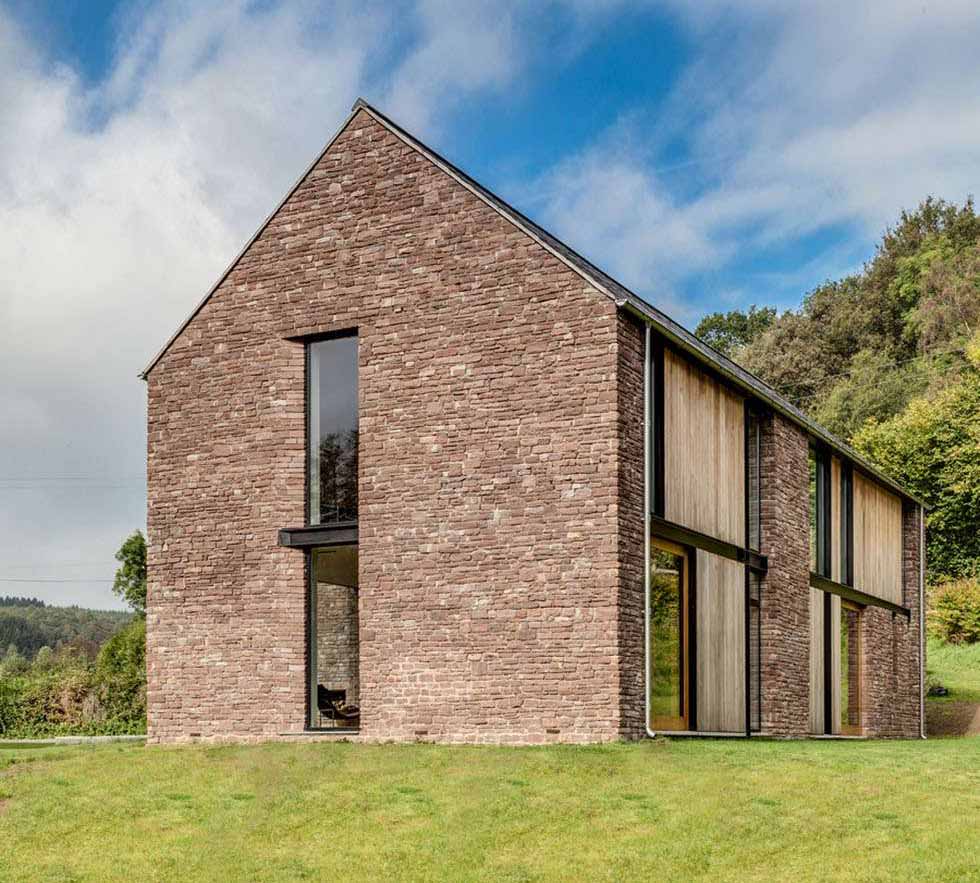 The stone was cropped and chamfered on one of the window edges and cut with a disc cutter to give it a purposefully smooth finish in order to contrast with the more rural finish elsewhere. Note how the window is off centre, but the right-hand side of the window edge is in line with the apex of the roof

What came next was a feeling of what Martin calls: “Being drawn to the no-nonsense solidity of the barn conversion.” The simple grid pattern of the building made it relatively straightforward to design, built around a steel frame structure with, in effect, a chequer pattern series of blanks and solids (windows and cladding). Indeed the steel frame is one of the house’s unsung victories, and Martin and Kelly have added some galvanized steel channel sections to express the structural steel frame that lies directly beneath, as otherwise it would have been completely hidden in the insulated build-up.

One of the great magical touches about this house is its scale — it’s almost a trick of the eye in many ways. Because of its positioning surrounded by woodland and because of its window positions and ‘domestic’ feel it looks, from a distance to be actually quite small. Yet up close it’s in fact quite imposing and impressive.

The flat frontage (save for a beautiful chunky chimney) and large glazing gives a real sense of ‘wow’. Indeed the chimney is perhaps Martin and Kelly’s favourite part of the house — it anchors the building to the ground and even incorporates an outdoor fireplace. 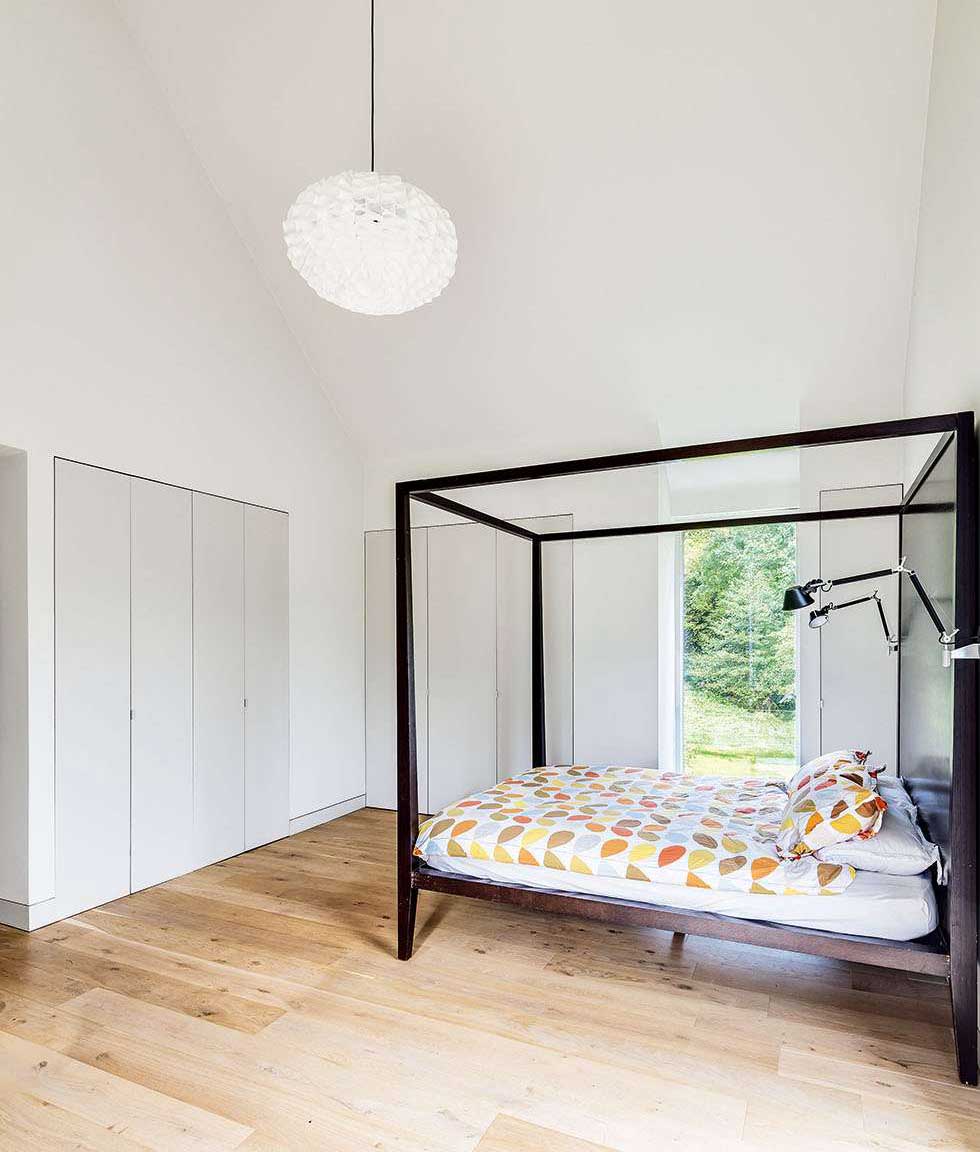 Wardrobes were built into the walls in the master bedroom. Because of the volumetric height of the space, the wardrobes help to give the external walls a greater sense of thickness and solidarity

Maximising ‘Wow’ on a Budget

“Actually, this house was all about maximising architectural wow for the money,” says Kelly (the budget was £350,000, coming out at £1,450/m2). Inside, the one-room deep floorplan (it makes it sound small but the depth is 7m or so) allows plenty of light to penetrate — there simply aren’t any dark areas. The plan is simple.

To the left, as you enter, is the family kitchen and dining space (with a utility and boot space); to the right, after the downstairs loo and plentiful built-in storage, a fantastic living space. 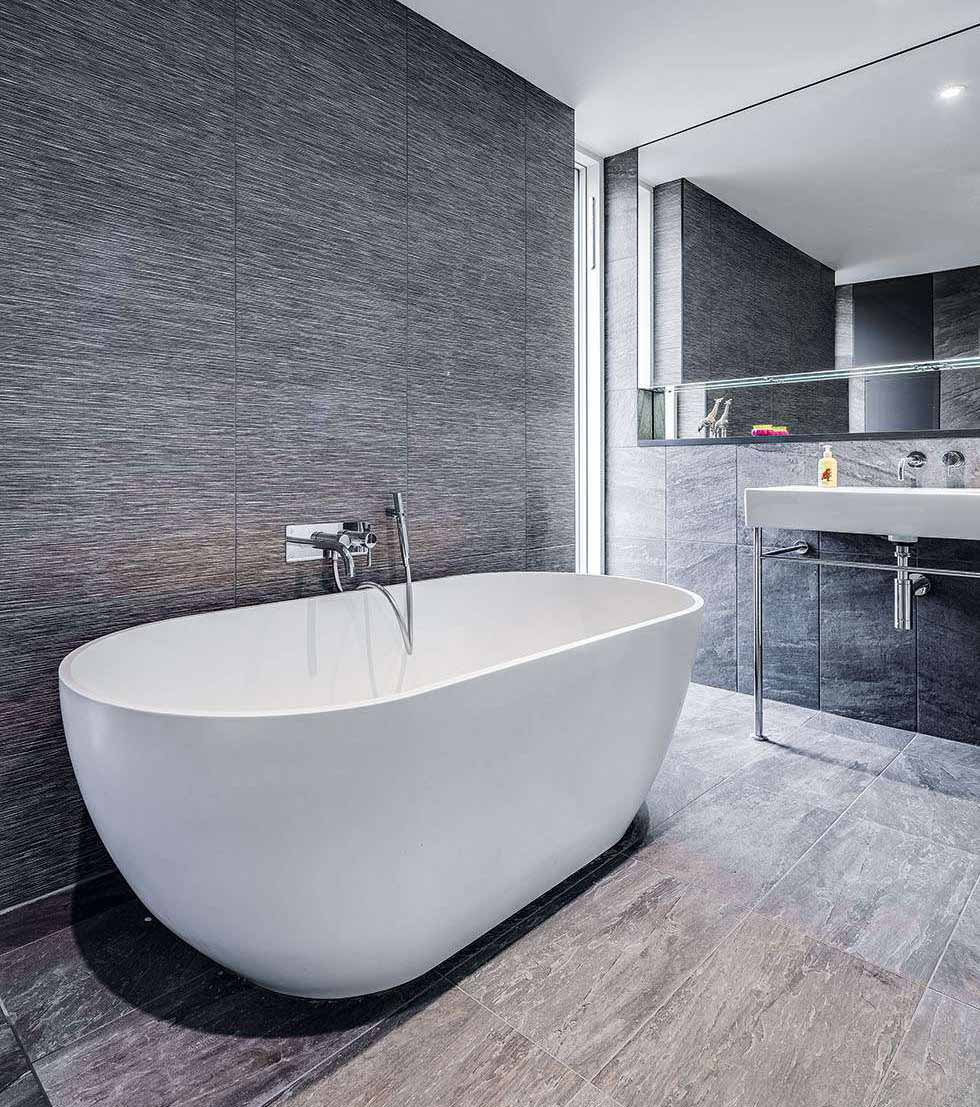 Upstairs, a couple of children’s bedrooms, a void overlooking the dining table, and a fantastic vaulted master bedroom suite that, thanks to the one-room deep layout, enjoys a triple aspect. It’s simple, smart and hugely attractive. With 2.9m ceiling heights throughout, the relatively modest footprint works very hard to give a sense of space.

Kelly calls it: “A robust family home.” There is plenty of storage to deal with the rigours of having two young children around and is built with Martin and Kelly’s family at the forefront. Yet, because Martin and Kelly are such talented designers, they have managed to incorporate all of these details and features which, almost without thinking about it, improve livability — all on a scale that isn’t beyond many people setting out to build their own home. Above all, the home is a statement for the power of good design. 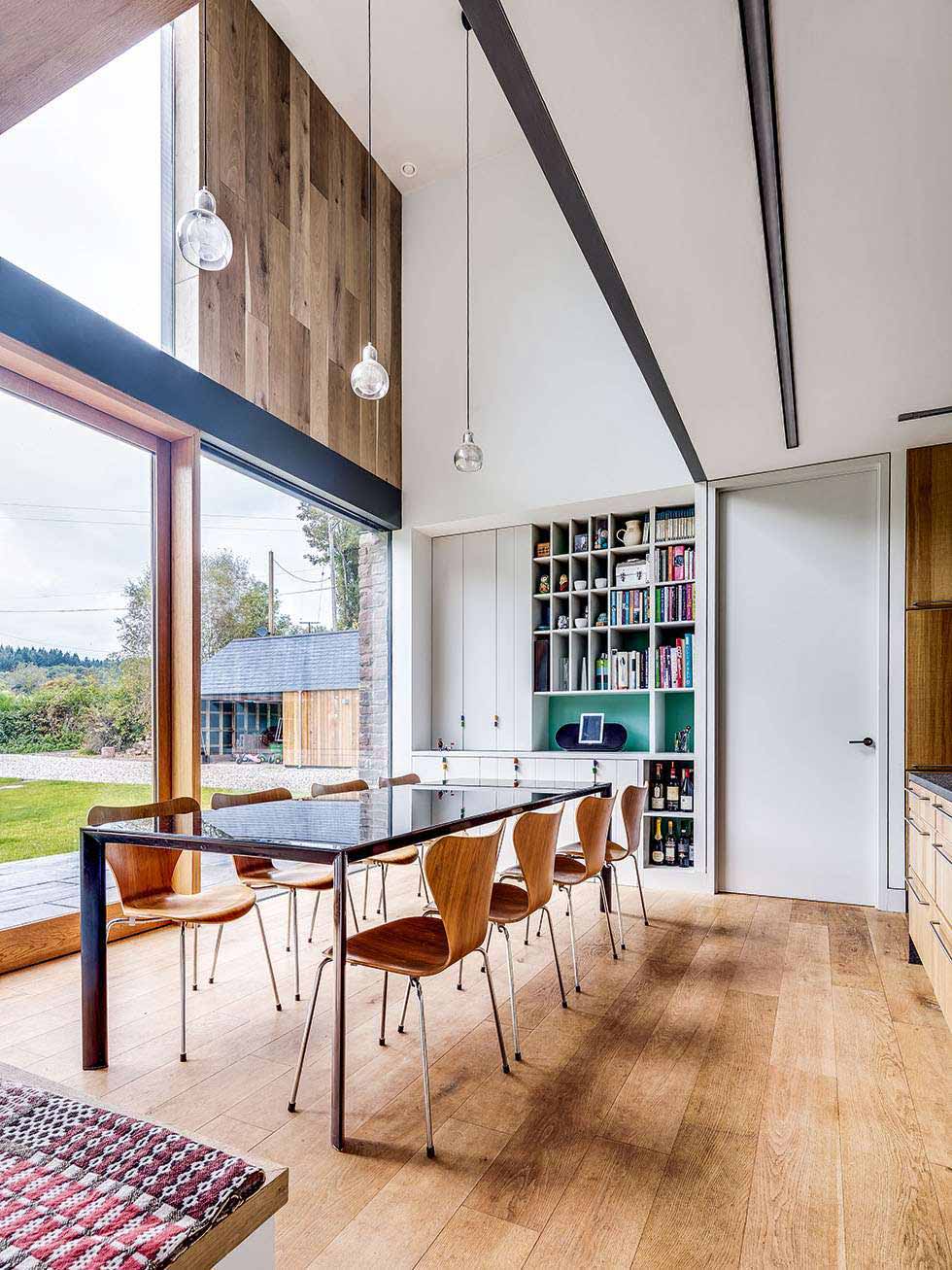 Engineered floorboards have been laid vertically in the double-height dining space, which features a bespoke glazing panel and large sliding glass door. The steel structure has been left on display

Martin and Kelly’s choice of steel construction should appeal to more self builders and renovators. Jason Orme explains why

Steel frame is a common form of construction in the commercial sector and it was this that was behind Martin Hall and Kelly Bednarczyk’s decision to use it on their home. “Modern barns, with their large spans and open spaces, are always made of steel, and so it seemed a natural option for us,” Martin explains. “We didn’t want to recreate a traditional 19th-century type of barn with stone walls, and so steel made sense.”

Almost all new homes, and many extension and renovation projects, have steel in them in some form – usually RSJs (rolled steel joists) to allow strong support above openings – yet timber frames, and in particular masonry blocks, account for the overwhelming majority of new-build construction types. But given Martin and Kelly’s design, which demanded large spans and large areas of glass, steel was the only system that could have worked. As Martin puts it: “Steel enables you to do architectural things that you wouldn’t be able to do otherwise; it was also competitive on cost with the poorer alternatives.”

The process of using steel as the structural system for a new home or extension is a little more bespoke and localised than, say, modern timber frame packages (the result is similar to the traditional open panel ‘stick-built’ timber frames). Martin and Kelly used a structural engineer to produce calculations (not just on loads but wind-bracing and how it would deal with thermal bridging issues) as well as member sizings and gridlines before engaging with a local steel fabricator who produced fabrication drawings and then went on to manufacture the frame.

“One of the best parts of using steel is that it is so quick,” says Martin. “The whole frame went up in just three days which gives you an incomparably quick sense of the scale of the finished home.” 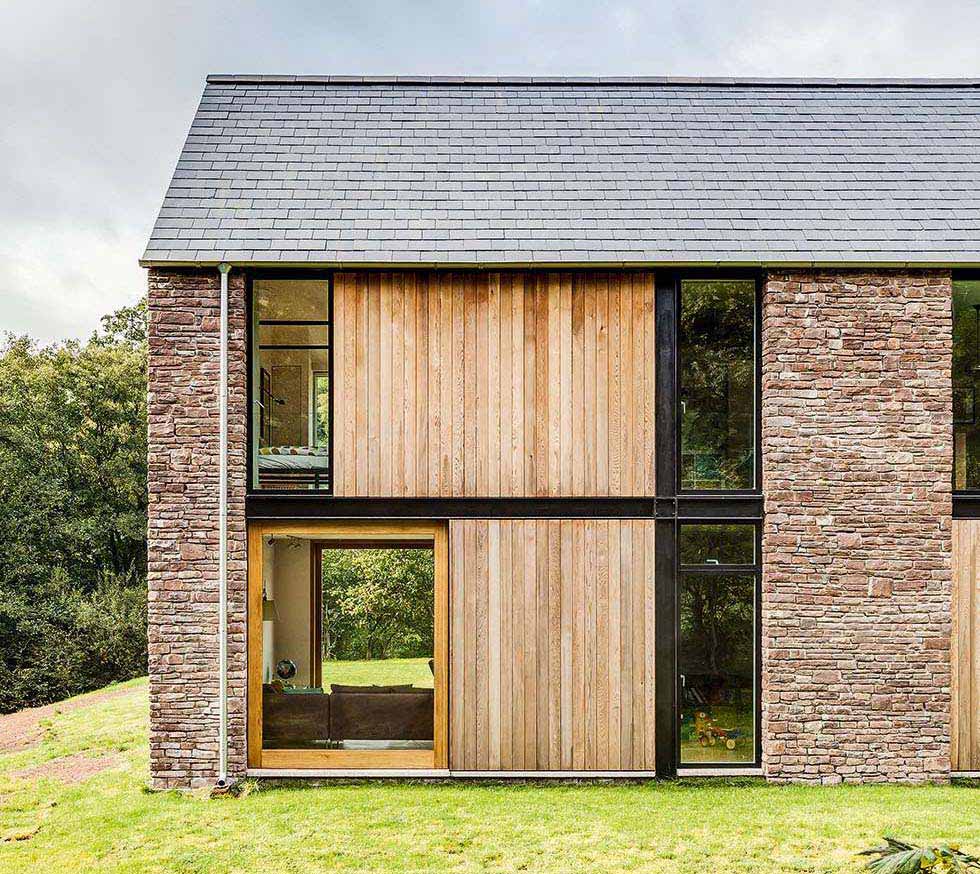 The new house, build out of steel frame clad in a mix of natural stone and timber, draws on the traditional simple barn form

The process itself on site was quite straightforward. Foundations are built in the usual way, at which stage the holding-down bolts are cast into the concrete. The base plates are then installed and the frame erected (by the fabrication company). Martin and Kelly opted for a beam and block ground floor with a timber joist first floor.

Steel is not without its challenges and, compared to the full coverage supplied by masonry and SIPs (structural insulated panel) walling systems, is decidedly minimal. You’ll still need to build infill panels, and thermal bridging is a complex issue that needs serious design consideration. The route is absolutely anti-’package’ and you will be rather off-piste when it comes to suppliers and, perhaps, Building Control officers. Yet for designs that demand large open spans across rooms, and large amounts of glass – which sounds like many contemporary homes – then in many ways it is the most sensible option available. 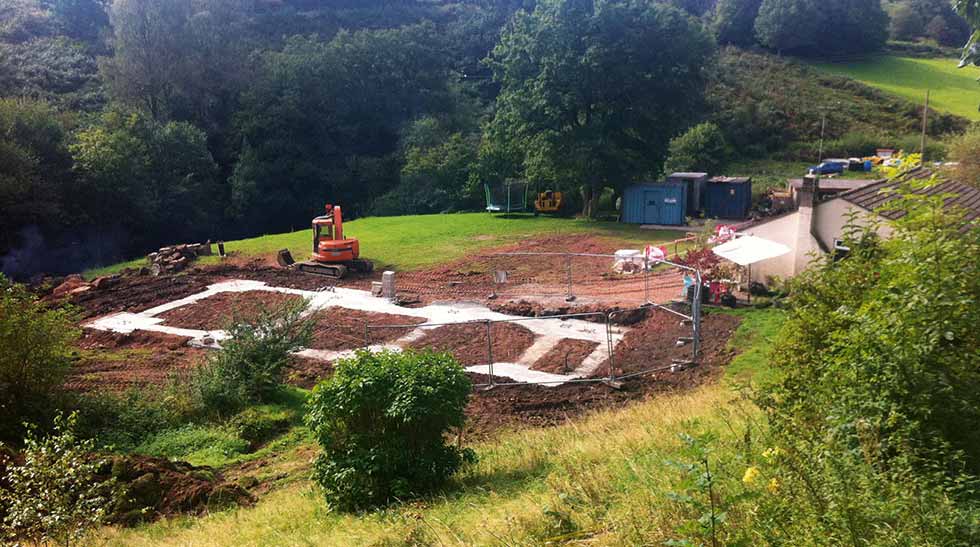 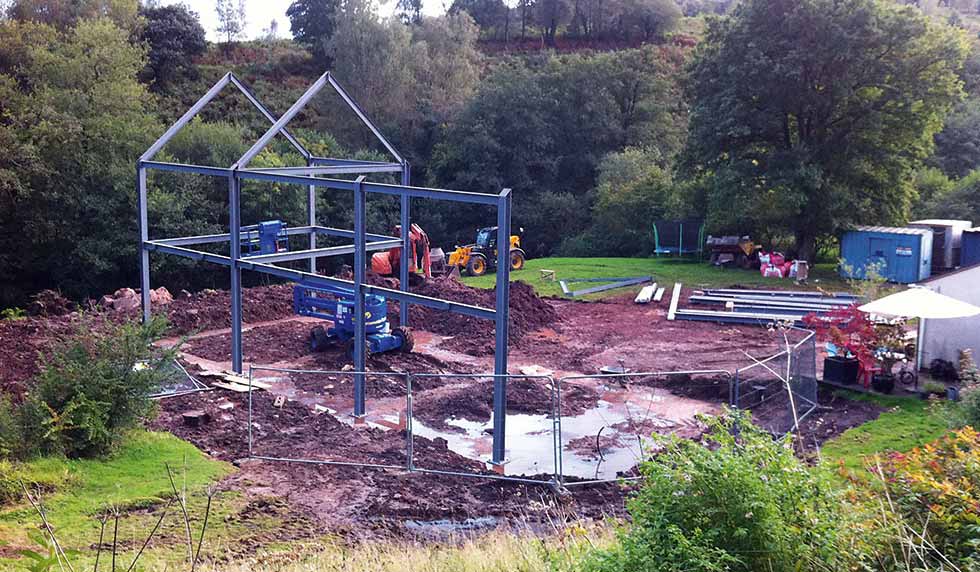 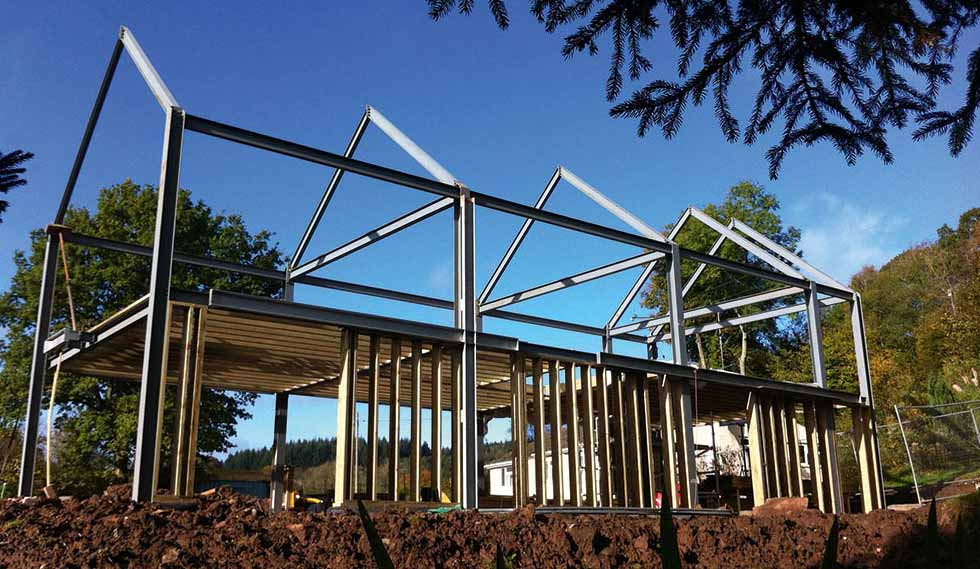 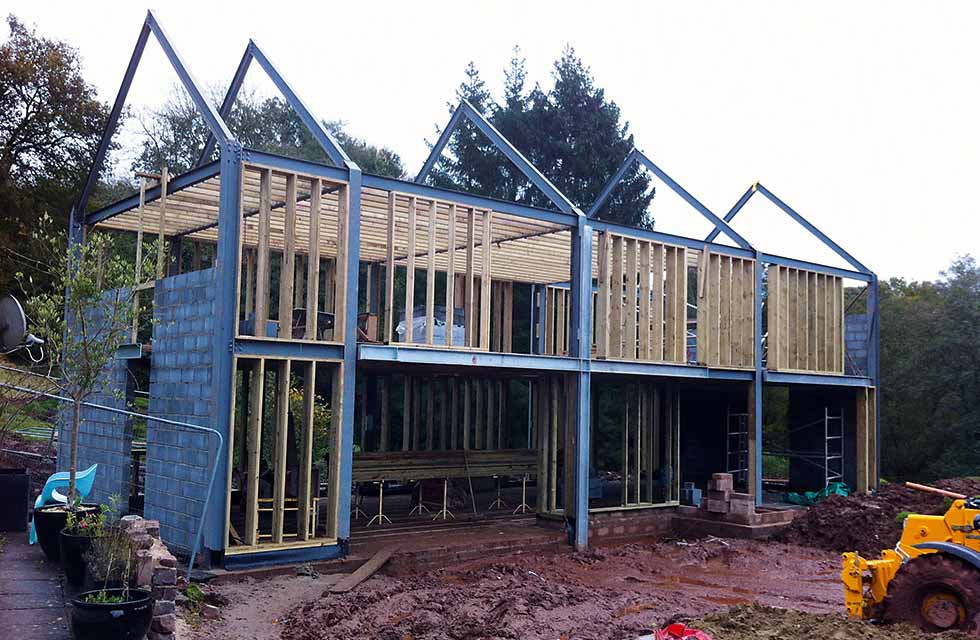 In a matter of days, Martin and Kelly’s house took shape. Note the need for external studwork and blockwork infills