It’s remarkable that Lisa and Ryan Tucker succeeded in buying their cottage at all, given the many twists and turns of fate. “We first saw it in 2014 after we had been looking for a long time,” begins Lisa. “It wasn’t beautiful and we didn’t exactly fall in love with it because it was damp, very cold and had been empty for some time. But we could see the potential.”

The 1820s cottage was originally a ‘two up, two down’, but had been extended in the 1970s; the extension consisting of a lounge and kitchen with a bedroom and bathroom above. A single-storey extension in the 1980s had added another room, a long hallway, a cloakroom and a utility room, with a conservatory appended in the 1990s. 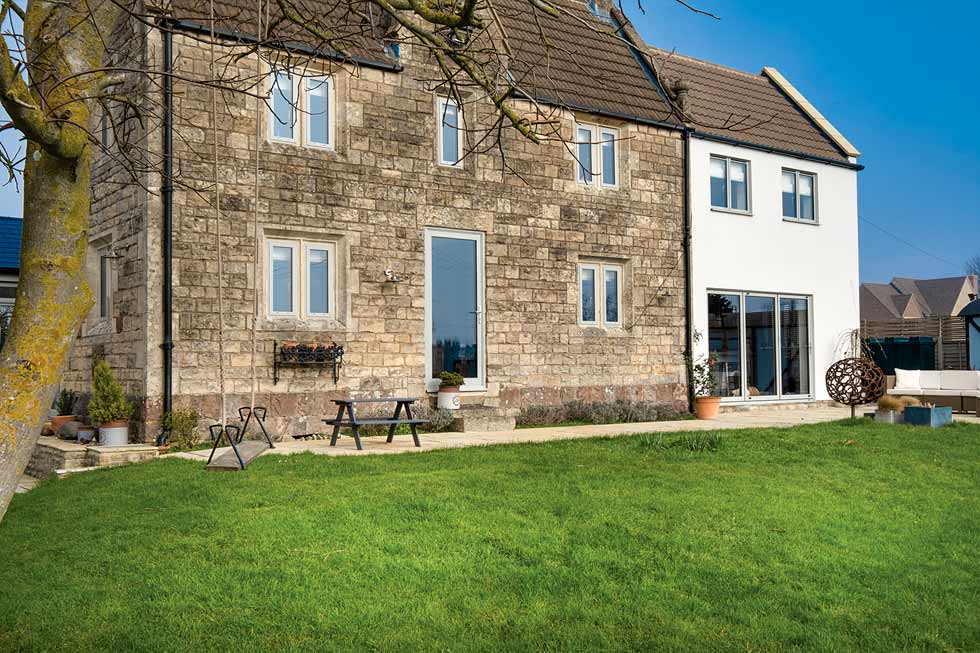 The property’s exterior. The two-storey extension have been finished in white render

“We could see there would be a huge amount of work,” says Lisa, who at the time was expecting her second child, Francesca. The work required to ensure the house reached its potential, combined with raising a new baby and their son Ruben, stopped them from placing an offer.

But after Francesca was born the couple had a change of heart. “I rang the agent who said firmly that no, the house was not available, the sale was going ahead,” says Lisa. “Nevertheless, I rang again two weeks later — and was delighted to hear that now the sale had actually come unstuck.” The couple contacted a solicitor to expedite things and in anticipation sold their car and Ryan’s expensive watch to raise extra funds.

But then the solicitor told them their purchase had also fallen through. “We were gutted,” says Lisa. “It quite spoilt our Christmas, especially as we had already sold our house and would have to move anyway in the April.” 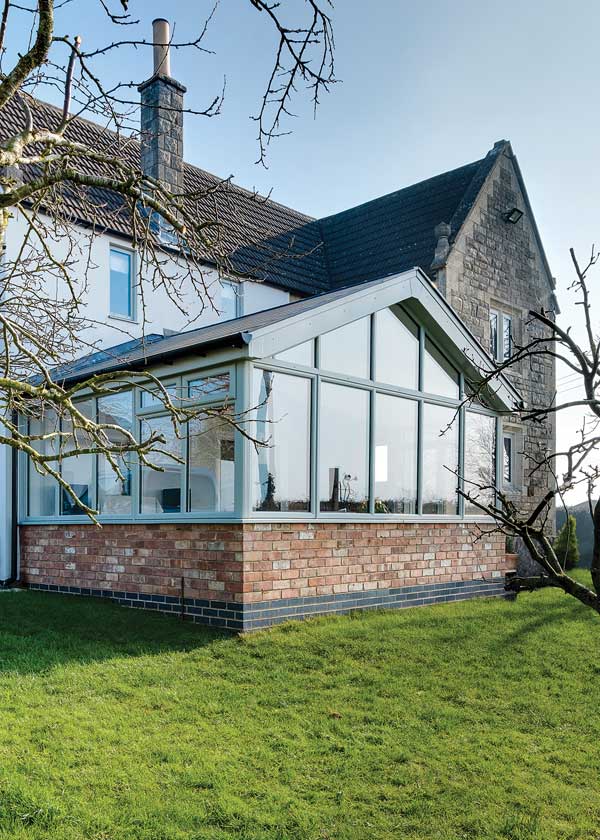 The Tuckers also decided to partially rebuild the 1990s conservatory, replacing it with a more modern space

Then, out of the blue, in January 2015 they received the news that all problems had been resolved and the cottage was theirs. “We spent the next three months clearing the very overgrown garden and field — so overgrown in fact we had no idea there was an old railway carriage in the garden and a second one in the adjoining field!” Lisa laughs.

Because the cottage was uninhabitable, the family moved into a caravan in the front garden.

“With two children and two dogs!” says Lisa. “And later we incubated some chicks in it too! But it was fun, despite being exhausting, exciting and unpredictable.”

(MORE: Living On Site in a Caravan) 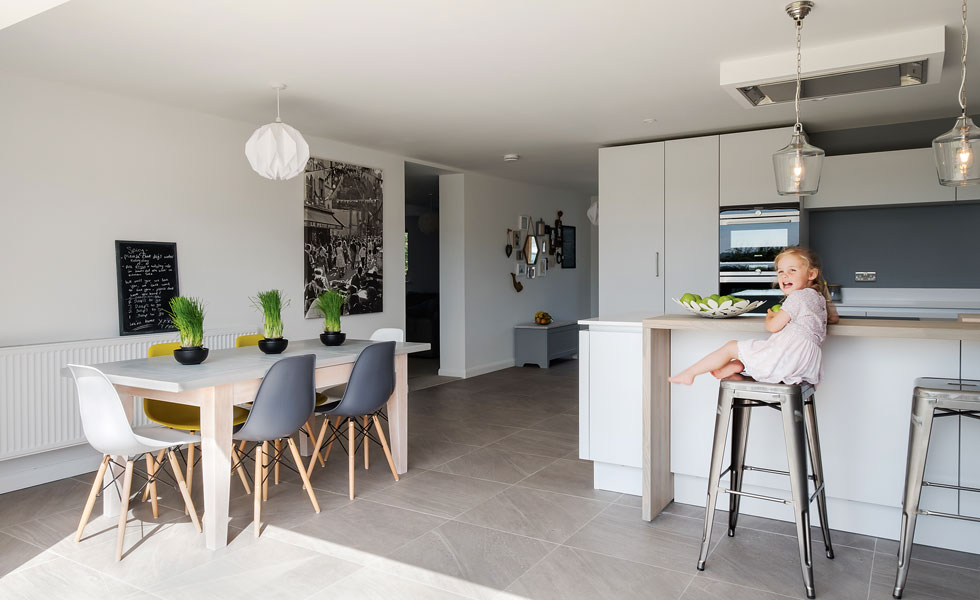 The kitchen/dining area is situated in the new 56m² two-storey extension. Above it sits the master suite

The couple employed Gary Patefield-Smith, senior engineer and director at Davidson Walsh, a structural engineering company, for the drawings and planning permission.

“The original plans were to have a single gable over the new extension with a flat roof beyond to the rear with render and stone quoins. The planners didn’t like this scheme therefore it was altered to what has been built today,” begins Gary.

What has been built is testament to Gary’s problem-solving abilities, which were tested by the design of the new extension. “The first floor structure of the extension needed to span the large openings within the ground floor while keeping the floor thickness as thin as practically possible. Therefore steelwork was introduced to split spans and keep the floor thickness to a maximum of 215mm overall,” says Gary. 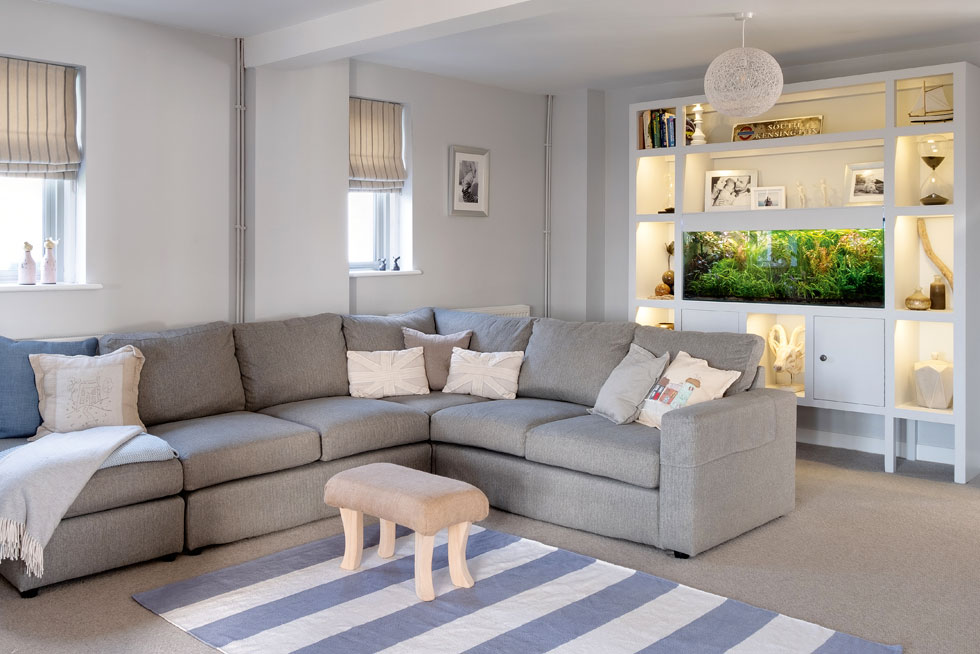 The sitting room used to be the cottage kitchen, but much of the floorplan has been rejigged to adapt it for modern family living

“The roof also presented many challenges due to the large spans and desire to have flexibility in the first floor layout, coupled with the need to create two gables with a central flat roof. This was resolved by minimising the number of load-bearing walls taken to wall plate level and introducing load transfer structures to support the roof structure in key locations.”

The family lived in the caravan while the building work went on. They gutted the original cottage, rewired, replastered and replumbed. The old staircase at the end of the cottage was demolished and a new one was put in in the centre of the house. They reconfigured the rooms and introduced new double glazed windows, doors and bifolds throughout. 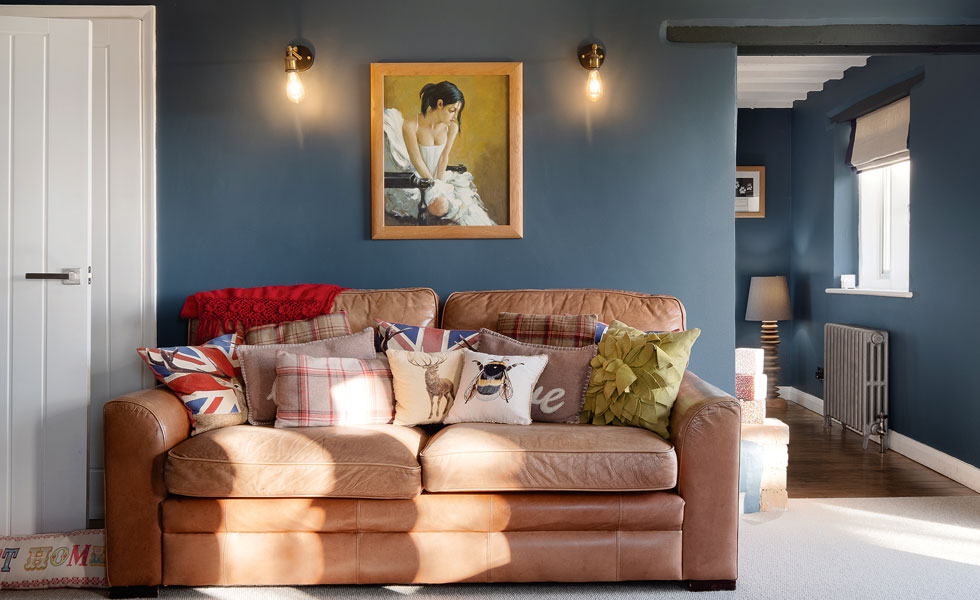 “So now we have a big kitchen/dining room with a master suite above,” says Lisa. And it was Ryan who fitted the German-made Leicht units from Contour Kitchens, with the help of a friend. Lisa wanted the kitchen to have a crisp but coastal look and she achieved this with worktops of Spekva heart ash and Silestone. 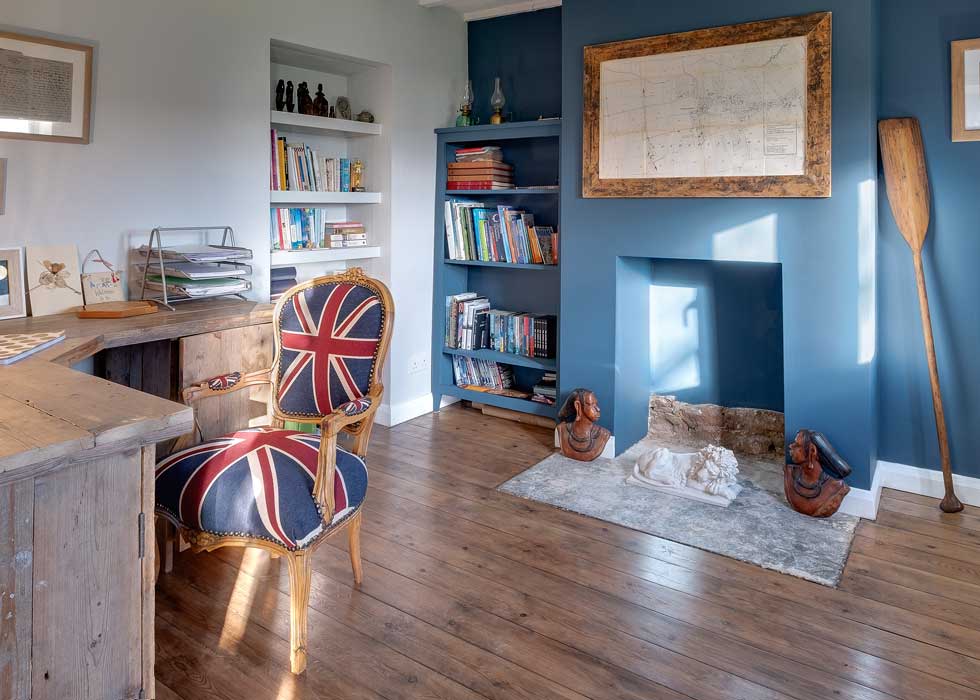 The snug originally functioned as a dining room before the remodel, and Ryan had to replace the old flooring, with Lisa painting it to give it a more characterful look

The couple did as much work as they could themselves while keeping their business running. Ryan, for example, did all the plumbing and flooring throughout the house and made a great deal of the furniture too. The bedroom furniture was crafted out of old floorboards which Ryan’s brother rescued from a skip, a bench was made from an old RSJ which they had to replace in the lounge, and the fireplace was concocted from various handmade bricks found in the garden.

(MORE: Which DIY jobs should be left to the professionals)

The final touch was reworking the 1980s single storey extension as a conservatory from World of Smile — its new warm roof system, designed to replace an average glass or polycarbonate roof of a conservatory, while maintaining the original windows, doors, frames and walls. 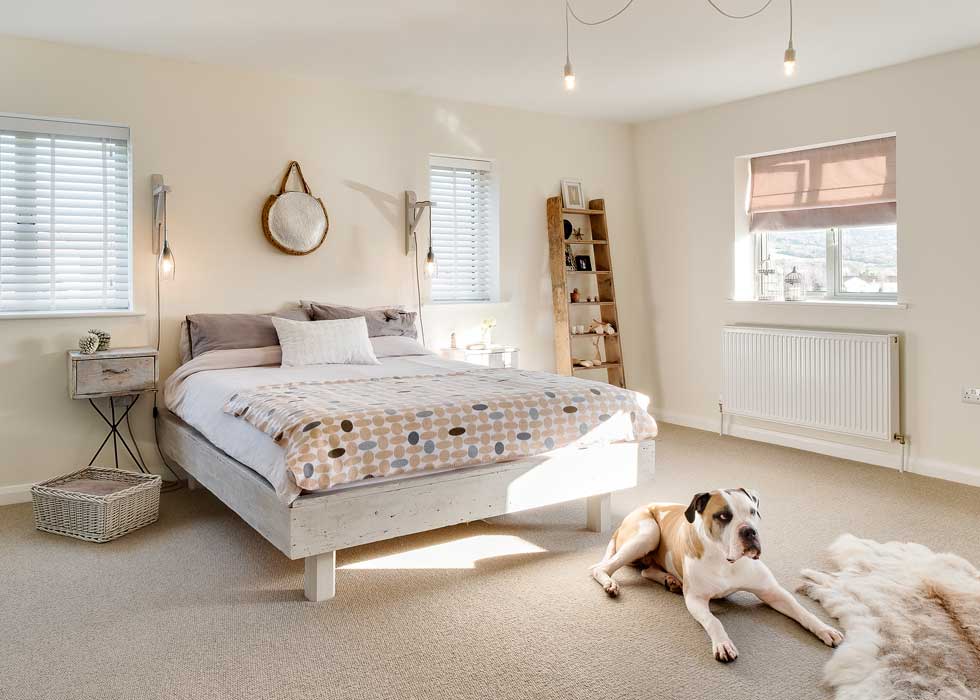 Having endured a very windy winter – which nearly blew their caravan over – the family managed to move into their new home in October 2016. However, it wasn’t until the end of 2018 that all the decoration and Ryan’s furniture making was finished and they considered it complete.

As for the carriages, one has become the hay store for their five alpacas, and the other a glorified shed. “We love the combination of old cosy cottage and bright contemporary rooms,” says Lisa. “Plus the mature garden and adjoining field are a haven for us all and have given us a huge sense of freedom.” 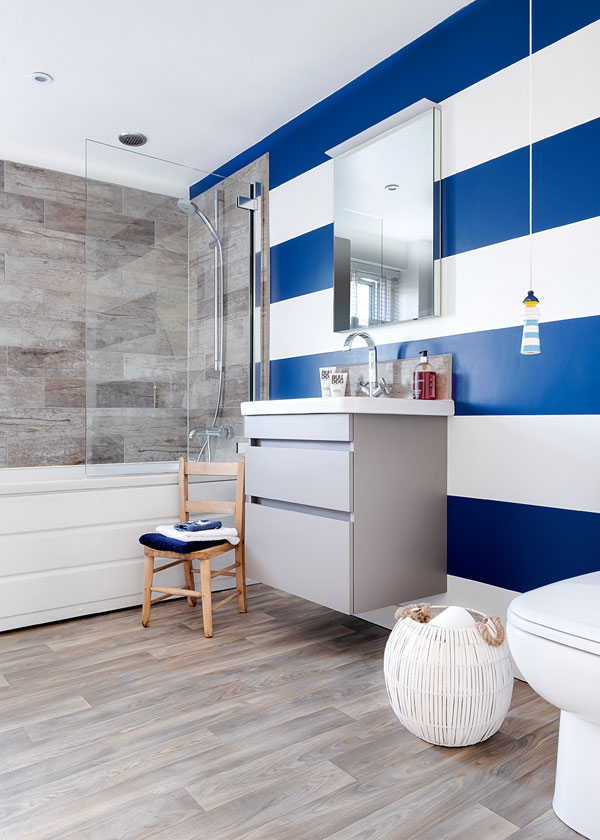