Wanting to downsize is a classic trigger for starting a self build, as is finding yourself with more free time after a busy career and bringing up four children — exactly the position Adrian and Sandra Girling, from a pretty village in north Essex, were in.

What is unusual, however, is that their eldest son Matthew was happy to put his architecture degree on hold for a year to design their home. “We never thought about using anyone else — it was brilliant to have him on board,” says Sandra.

Ten years earlier, the couple had bought a double plot in the same village. On plot one they self-built a six-bedroomed family home. Now it was time to turn their attention to plot two. 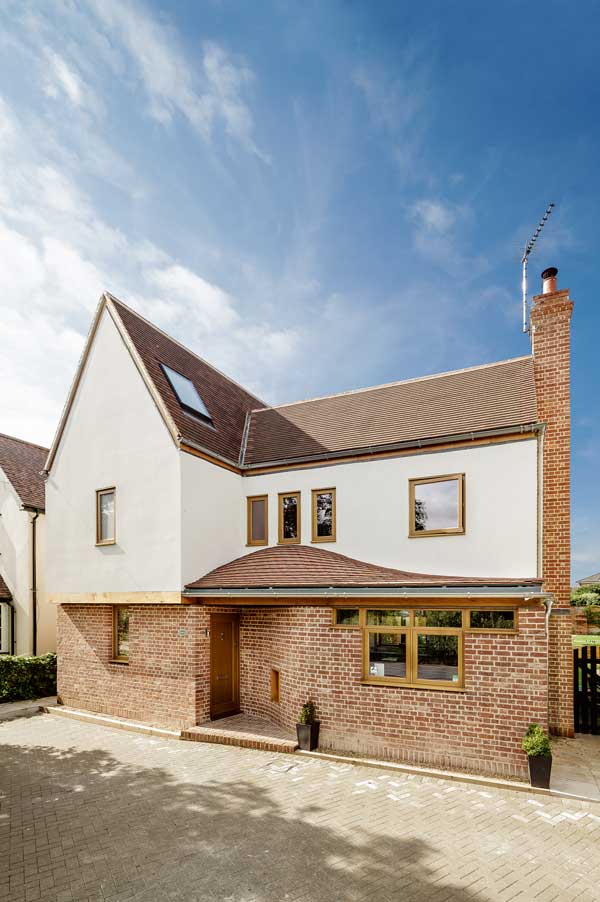 Inkeeping with its conservation area site, the exterior of the house has many traditional features, such as a jetty, a steeply pitched tile roof and red brick and render cladding

“We knew we wanted something a lot smaller, lighter and more open plan, but with a private space downstairs,” explains Sandra. “We also needed lots of storage.”

The couple were also after a low maintenance house and garden that would leave time for activities such as golf and stargazing. “Apart from that, we really left Matthew to it,” says Sandra. He in turn presented his parents with choices on everything from light switches to door handles and the colour of the mortar for the bricks. “He was very calm and we never fell out,” she adds.

Even so, there were potential stumbling blocks. The plot was small and irregular, in a conservation area, and just two metres from the next-door neighbours, requiring a Party Wall Agreement before work could start on the foundations. 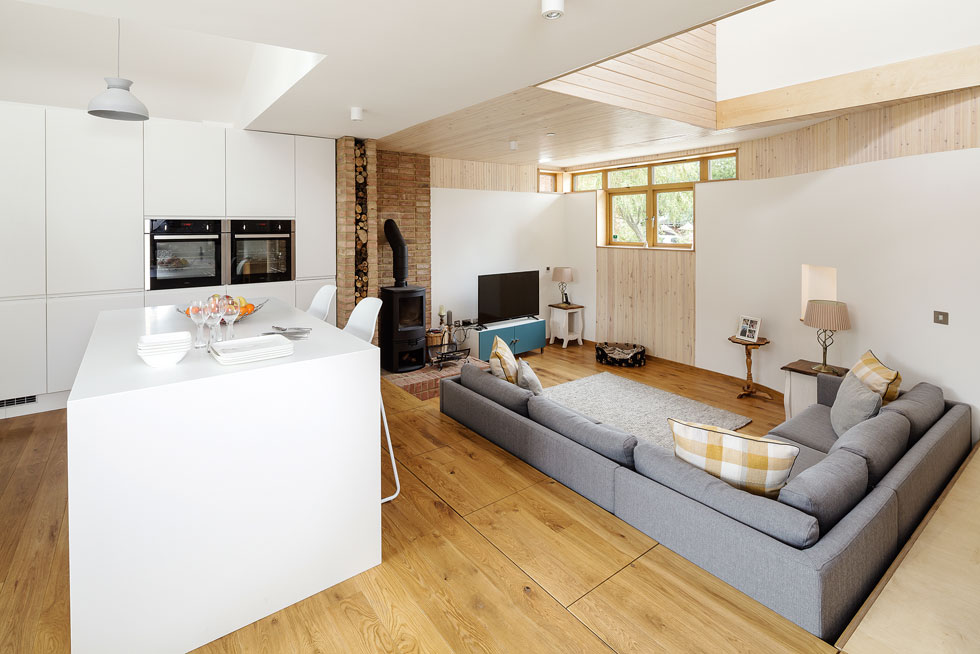 Undaunted, Matthew drew up plans for a traditional-style exterior with a more contemporary, Scandi-influenced interior. Thankfully, the proposals sailed through planning first time, on the condition that potential overlooking issues with the neighbours were addressed.

Keen to build with timber frame, the Girlings opted for a traditional stick-built route, rather than prefabricated structural insulated panels (SIPs). “I wanted my parents to have the option to change things on site, which you can’t do with SIPs,” explains Matthew. 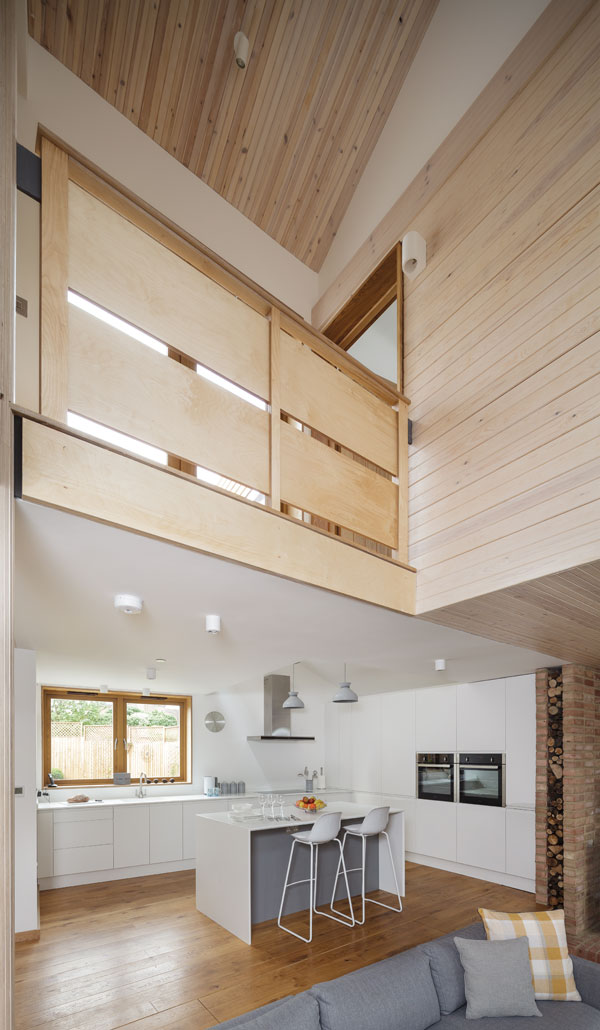 Changes in the ceiling height in the kitchen, from single to double, as well as the rooflight above, brings extra interest and valuable natural light to the interiors

The complex design and irregular shape (the house is slightly wider at the front than the back) also pointed to an on-site build.

At just 80m², the footprint of this three-storey house isn’t large, but it feels neither cramped nor dark, thanks to several clever design features that become apparent once you step inside.

A central atrium allows anyone seated in the sunken living area to gaze up to the first floor, while a galleried landing provides views downstairs, as well as allowing natural light to flow through the house. “That definitely makes the house feel bigger and more spacious,” says Sandra, who was initially unsure about sacrificing the bedroom space needed for the feature. 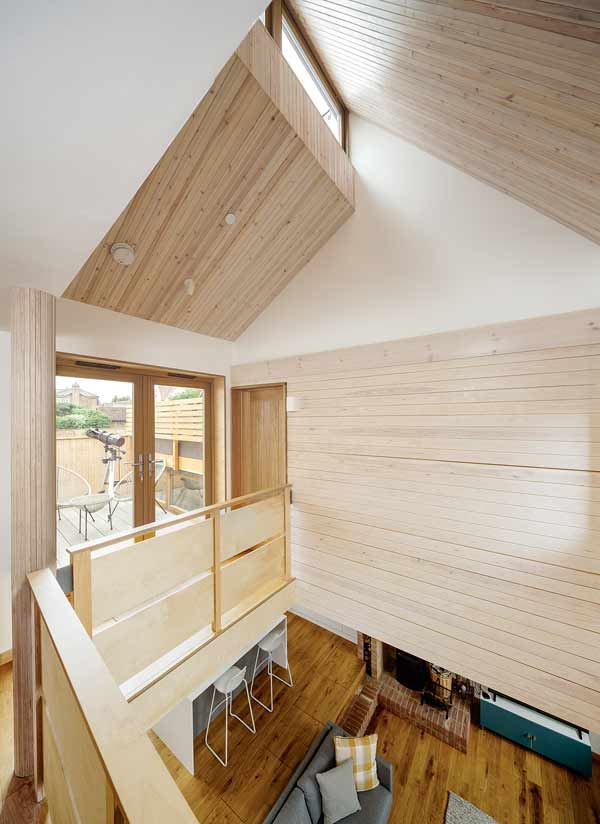 The atrium above the sitting area transforms the downstairs space with natural light from the first-floor windows. An enclosed balcony provides a further spot to sit

The extensive use of pale timber cladding and white painted walls also helps to make this a light-filled house — the timber has the added benefit of making the space feel warm and inviting. With the loft housing a third bedroom and shower room, Matthew hid the home’s main storage space underneath the perimeter of the sunken living room and along the side of the loft bedroom within the eaves.

In keeping with its relaxed feel, the home features a private balcony that can be reached from the landing on the first floor, and an outdoor covered seating area at the rear. Here, Matthew added a curved brick wall and timber slatting to meet the planners’ concerns about overlooking (next door’s windows face directly onto the back of the property and garden).

Externally, the stand-out feature at the front is undoubtedly the Arts and Crafts-inspired curved tiled roof that sits over the living area and porch. “There were some concerns about its buildability,” says Matthew. It was a tricky task, for sure, that required digital software and computerised machinery to cut the plywood rafters with total precision. 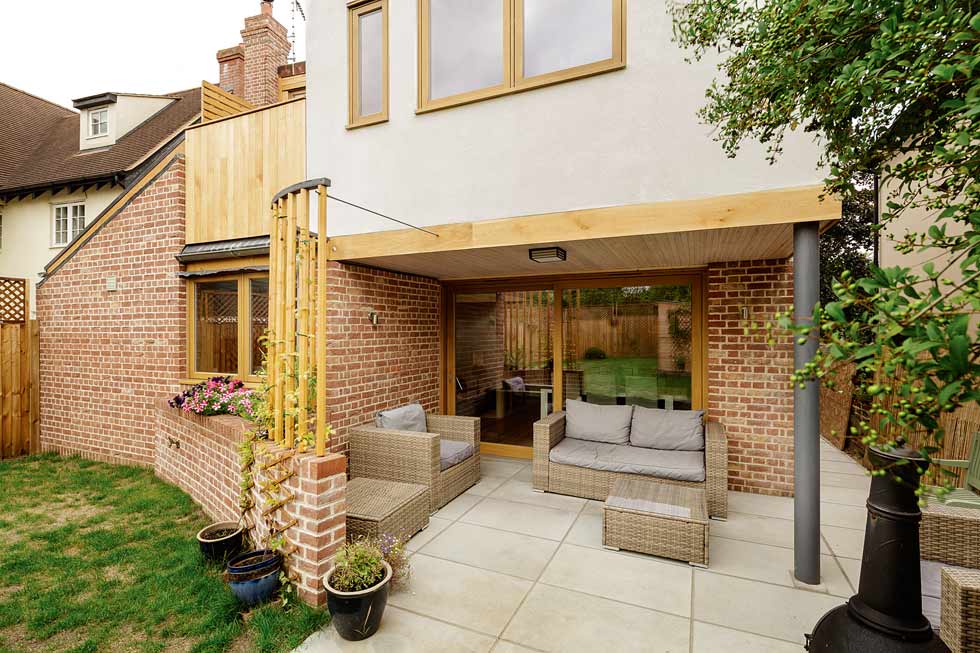 To avoid overlooking, Matthew added a semi-circular brick wall to the rear and timber slats around the large curved patio (the master bedroom was also cantilevered over to provide shelter)

Constructing all this on a tight budget was no easy task for the family. Matthew explains: “It was really tough — I had to do lots of research to find the cheapest options. I got the cheapest bricks I could find, at 55 pence a brick, but managed to keep some more expensive items such as the roofing at the back of the house.”

His detailed drawings and 3D models meant that almost nothing was changed on site during construction — alterations here can mean many thousands wasted. Adrian and Sandra, who were living next door during works, also pitched in. 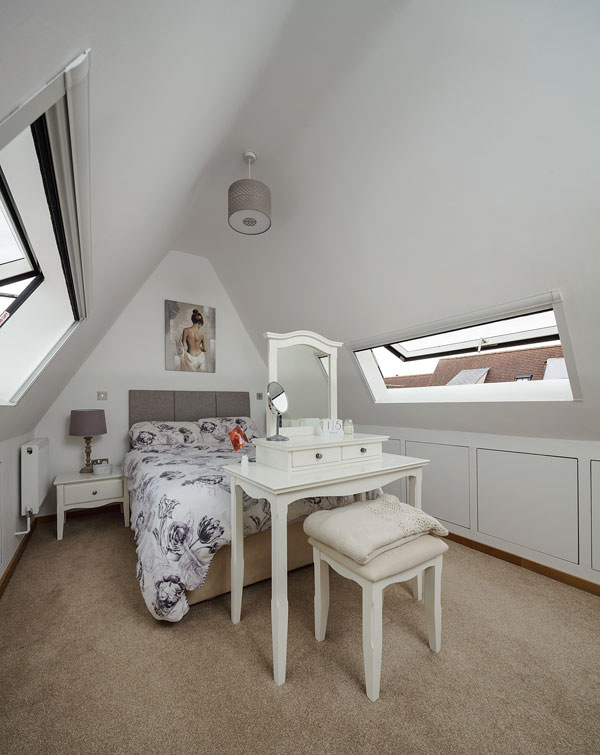 Some potentially expensive features were scrapped, including curved high-level glazing at the front. Solar panels were also value engineered out, although generous amounts of insulation (a honeycombed reflective foil system from Actis) and high levels of airtightness means that this house comfortably meets the latest Building Regulations for energy efficiency.

With so many interesting design features, which part of the house do the couple enjoy most? They both agree: the central atrium on the first floor and the masses of easy connection to outdoor spaces.

“If we want privacy, we can use the little balcony upstairs — Adrian keeps his telescope here and uses the space for stargazing,” says Sandra. “I feel that we have always lived here. I can’t imagine living anywhere else!”