In this article you can find advice on:

The fact remains that living in a damp climate means keeping rainwater at bay is fundamentally important to maintaining the health of our buildings. If problems go ignored, outpourings from badly maintained pipes and gutters, or persistent small leaks, can ultimately result in extreme damp, fungal decay and even subsidence.

Fixing relatively minor defects in your home’s rainwater goods system before they have a chance to wreak havoc prevents the need for costly repairs further down the line. However, some tasks that might appear to be fairly simple at first glance – such as fixing gutter leaks – can sometimes be deceptively difficult.

Patch repairs using gutter sealant never last long, so where you’ve got a number of defects the best long-term solution may be complete replacement. However, the number of different manufacturers who produce guttering in a wide range of sizes, styles and colours, means one brand doesn’t necessarily connect to another of the same nominal size and type (a problem that also bedevils the world of plumbing).

Picking the right material is also important from an aesthetic viewpoint. By far the most common material used is PVCu; it’s relatively inexpensive and has the benefit of being lightweight and non-corroding. However, it’s easily damaged and prone to developing leaks at joints, not to mention it does not tend to look right on period homes. The materials of choice for conservation officers are typically cast iron or cast aluminium (which looks very similar to cast iron but is lighter and not prone to rusting). Modern stainless steel, zinc or extruded aluminium suit contemporary homes.

Before looking at how to deal with common defects, there is one more question to address: which trade should undertake the work? Traditionally, plumbers were employed for work to lead downpipes or lead-lined wooden box gutters. But today, the trade best equipped are roofers, because of the importance of integrating guttering with roof slopes and their ability to operate fearlessly at height. There are also specialist firms who can combine repairs with the overhaul of eaves and fascias.

In terms of access, most work on single and two storey buildings can be carried out using ladders or mobile towers. In most cases scaffolding isn’t necessary, unless there’s a conservatory in the way.

If water is allowed to ‘pond’ at the base of walls then it can, over time, soak into the walls and eventually soften the ground, robbing the property’s foundations of support. So channelling surface water well away from your house is of paramount importance.

In older properties this was often achieved simply by running pipes out under the pavement into the street, or into a ‘combined’ drainage system. But today, surface water must, by law, be kept separate from the foul waste drainage system to avoid overwhelming sewage networks. So unless you’ve got a ditch or stream nearby, surface water normally needs to be safely discharged via underground pipes out to a soakaway in the garden.

Soakaways are rubble-filled pits which should be located at least five metres from the house. Creating a new soakaway involves excavating a 1x1x1.2m pit, filling it with hardcore and topping it with 50mm of concrete on a polythene sheet and a 25mm layer of sand blinding. It will cost in the region of £250. 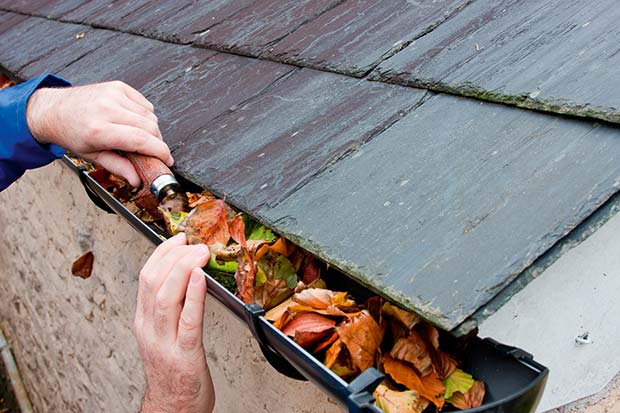 Implications
The most likely cause is simply down to blocked gutters. Sometimes a blocked hopper (the open box at the top of a downpipe that collects and channels water from guttering or pipes at high level) or downpipe causes the water to back up and overflow.

With cast iron gutters, unless the inside surfaces are fully protected, water that does not drain away can lead to corrosion. Cast iron ogee gutters are screwed to fascia boards, where rust can make them prone to splitting — resulting in dampness at the top of the walls and rotting the eaves timbers as a result.

Older properties sometimes feature hoppers which are particularly prone to blockage and need to be periodically cleared, or replaced if corroded, split or leaking.

PVCu gutters are jointed using rubberised gaskets which tend to perish over time, so it is not unusual for small leaks to develop at joints. PVCu is prone to expansion in hot weather, too; stresses can occur at brackets, joints and connectors as a result, and in time the rubber seals can degrade or become silted and start to drip.

PVCu guttering can also be prone to sagging or twisting due to either old age or a lack of support from broken or missing brackets. What’s more, PVCu gutters can easily be damaged when ladders are leant up against them.

Water leakage is most serious where it can occur unseen, which is why gutters on Georgian and early Victorian roofs, which are hidden behind parapet walls, can be such a concern.

Unblocking
It’s amazing what finds its way into a gutter — dead birds, tennis balls, twigs and fine soil. Before grass and plant growth completely choke your gutters, this debris needs to be scooped out with a trowel; a job that can normally be done with ladder access. If you’re intending to get someone in to do the job, it’ll cost around £5/m length for a two storey house. So, budget around £50 for clearing gutters on the front and rear of a small mid-terrace house — or, say, £75 if there’s a small conservatory (to allow for awkward access and time spent clearing the gutters with an extendable rod, and hosing the glass down). If, however, a larger conservatory needs a scaffolding bridge over it, this could add in the region of £225 to the total cost. 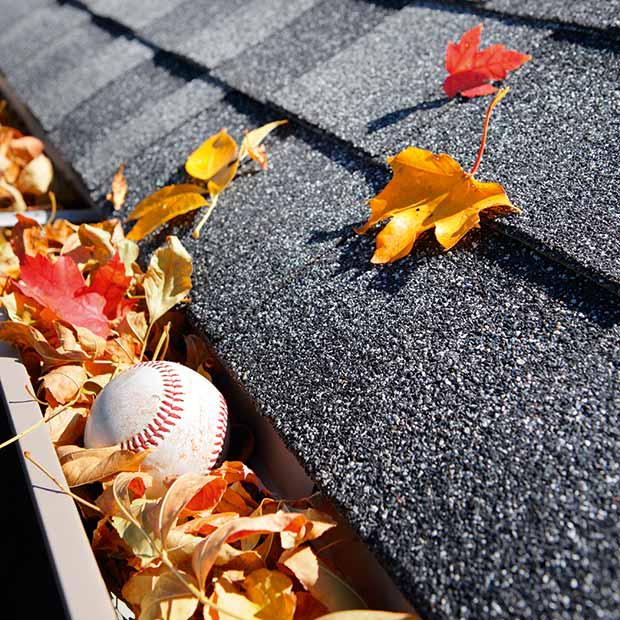 Repair
Cast iron guttering is generally more time consuming to work on. Joints are bolted together (and usually firmly rusted in place), but once released, joints can be cleaned with a wire brush before applying rust-inhibiting metal paint. When dry, gutter sealant should be applied to the joint, which will then be bolted back together and reinstated. With PVCu guttering, defective rubber seals or connectors at gutter joints, or stop ends, can be replaced with new fittings, although care should be taken to leave expansion gaps (of approximately 7mm).

Support and Realignment
Sagging gutters need improved support so that there is at least one bracket per metre of guttering. If the brackets are fixed to a timber fascia board, check the condition of the fascia; if it has rotted or is not level, it will first need to be overhauled or replaced. If there is no fascia to secure them to, gutters are sometimes held in place with special brackets fixed to the rafter feet. In some cases, the guttering may need realigning so it forms a gentle constant 1:40 slope down to the nearest outlet without sagging. Some support brackets can be adjusted in-situ to alter the fall of the guttering, but unfortunately most cannot. (Although it may be possible to make small height adjustments by inserting strips of packing under a length of gutter where it sits on a clip.)

Often the most effective solution is to replace the entire system. Even this can be a challenge on terraces and semi-detached houses where new guttering has to be connected with the neighbours’ old stuff, so it’s important that the correct adaptor is used. Any defective lengths of guttering should be replaced. If it’s only one section, it should be possible to obtain a matching replacement, but it’s important to carefully check the shape and diameter.

Adding Downpipes
If an otherwise well-maintained guttering system overflows, the problem may be one of design. In some older properties the number of downpipes is minimal, which could cause overflow in severe weather.

As a rule of thumb, one downpipe should serve no more than three smallish terraced houses (preferably two). Any new downpipes will need to discharge at their base by connection to a surface water drainage gully leading to a soakaway, or perhaps via a smaller subsidiary roof. Finally, fitting higher-capacity ‘deep-flow’ gutters is another way to accommodate a greater volume of rainwater without overflow. Also ensure you check that roofing underfelt is projecting down into the guttering by about 50mm, as this helps to minimise the risk of rainwater running down the wall.

Costs
A breakdown of costs is provided below. But, by way of example, a semi-detached house with one bay window, no access problems, with a gutter replacement to all three sides with standard 100mm half-round PVCu guttering – where it can be easily connected to your neighbour’s home – would cost in the region £590. This excludes any new downpipes; add on £100 for each new downpipe. On a larger detached house, with a more complex guttering configuration and also allowing for four new downpipes, budget in the region of £950.

Implications
There are a number of reasons why downpipes leak.

Remedial Work
Blocked downpipes can be cleared using a long pole or stiff wire pushed down the pipe to dislodge the blockage. The gully (the ground-level drain) below the downpipe should first be covered to stop any debris entering the drainage system. Where downpipes are connected at their base directly to underground drains – rather than discharging over gully gratings – access for clearing blockages can be restricted (unless it’s connected via a gully with an integral ‘rodding eye’). You may need to temporarily disconnect and remove the pipe (or the lower section) in this event.

Cracked and broken pipes should be replaced. This tends to be a fairly straightforward job with PVCu pipes, simply requiring the brackets to be unscrewed so that the pipe can be taken out and replaced. (Brackets are required at every joint, and should be no more than 1.8m apart.) Old cast iron pipes, however, are held by metal brackets (or integral metal ‘earlobes’) attached to the wall with big metal spikes driven into the brickwork, sometimes into fixing holes with metal or wooden plugs. They can be hard to remove without damaging the brickwork. Although, sometimes brackets are fitted with spacers to prevent the pipe contacting the wall — leaving sufficient space for periodic painting to inhibit corrosion. 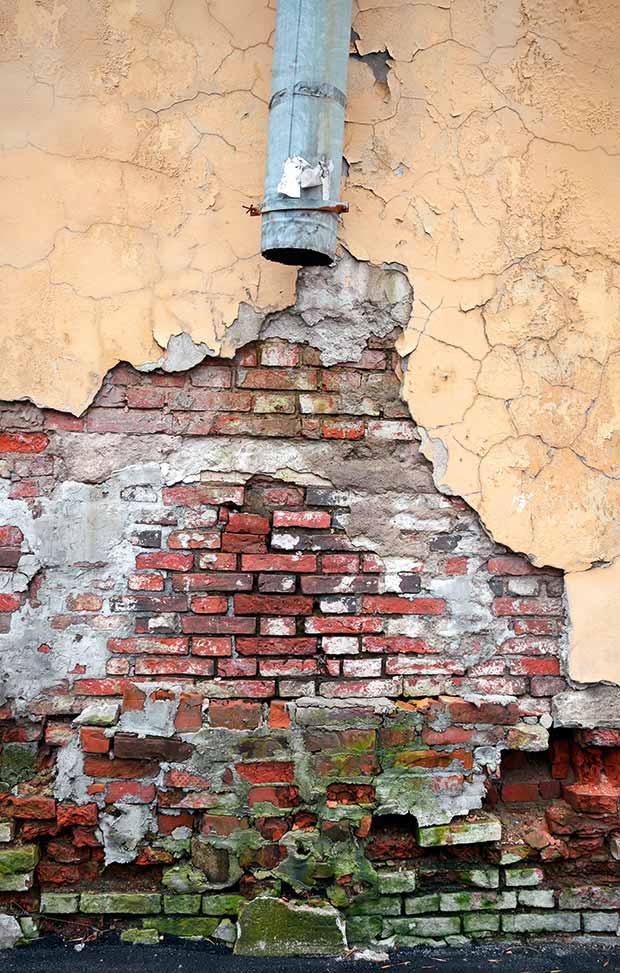 Implications
In most cases this will be down to leaks and overflowing gutters or downpipes splashing. But damp problems at ground level can also develop where downpipes discharge directly on to the ground next to the house, or where a gully has become blocked. Over time this can cause the ground to become marshy and unstable, even affecting the support to walls from foundations — at worst, causing localised subsidence. Damp in walls at low level is commonly misdiagnosed as ‘rising damp’, with expensive and unnecessary injection damp treatments carried out at the behest of mortgage lenders, rather than solving the true cause of the problem.

Remedial Work
Where downpipes discharge on to the ground, they should be diverted away from the house and connected to an underground surface water drainage system or to a soakaway to prevent flooding from causing damp to the main walls. If the water from a downpipe is overshooting the gully and subsequently splashing the wall, the pipe can be extended at its base by fitting a shoe, which will enable it to discharge accurately. Ponding of water around a gully indicates that the water is not running away properly, often due to a build-up of grease and/or solid matter in the trap, or a blockage caused by debris. A simple blockage may be solved by removing leaves from the gully grating. Alternatively, the blockage can be cleared with a solution of caustic soda or by flushing through with a high-pressure hose.

Modern gullies have a fitted ‘back inlet’ to allow rodding. Fitting a protective cover over a gully is always a good idea to restrict ingress of leaves. 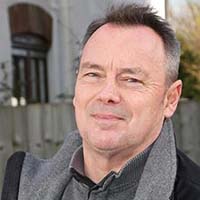