Paul Constable and Lucy Fallon’s log cabin looks right at home on their woodland plot, but it is hard to believe it took only 59 days to build.

That is until you learn of the prefabrication method they used, importing ready-cut redwood pines (along with made-to-measure doors, windows and insulation) from Latvia.

The couple we so taken by the look of the logs, that they chose to clad the interiors with it too, creating a cosy home with a distinctly North American lodge vibe. What’s more, their speedy build meets and surpasses eco requirements and will cost them very little to heat and run.

Paul bought a rundown 1950s bungalow on the site in Derbyshire in 2006. He had no particular vision for the site, but had some money to invest and it seemed like a good long-term plan.

The two-acre site, just outside of Chesterfield is set in woodland and was ripe for re-development upon the demolition of the existing building. 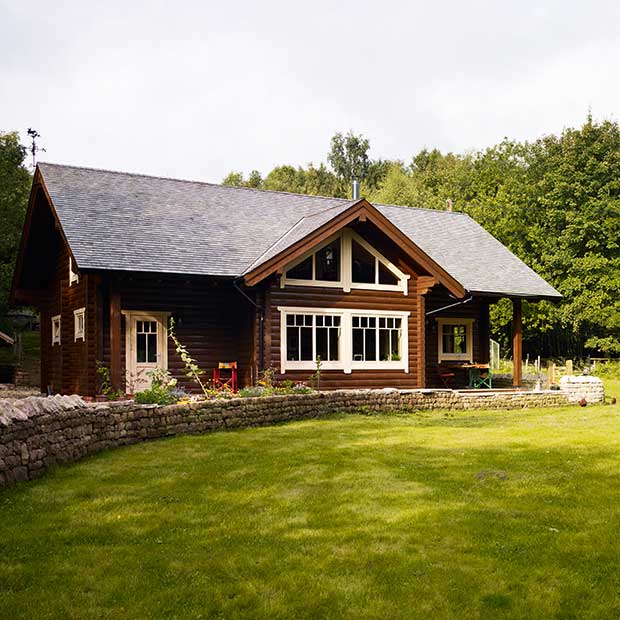 Paul’s first planning application was for a brick-built house, but this was refused as it was deemed ‘significantly’ larger than the original bungalow and would impact on the character of the area. As a result, Paul’s architect reduced the size and added a basement — permission was granted for the revised plans in September 2008.

However, with the country in the grips of a credit crunch, Paul changed his mind. He felt the brick property would not sit well in the woodland setting, and given the economic climate, he did not want to take on a design he wasn’t happy with. But, having spent £20,000 on planning already, he could not give up either.

Fortunately, by now he had met Lucy who drew his attention to the log cabin he had built on site as a place to use while he was working on the new house. She pointed out how well it worked in the woodland setting and so Paul decided to build a log home instead.

The couple went back to Log Cabin UK (LCUK) who had built their first cabin to discuss designs. They opted for one of LCUK’s off-the-shelf designs and made sure it was under the 187m² limit that planning had dictated. Within weeks the revised application was submitted, then accepted.

The layout consists of a large open plan living, dining and kitchen area on the ground floor, with a en-suite bedroom, utlity and bathroom coming off it. Part of the living area has a double height ceiling with a balconied landing above. This side has large windows to draw plenty of light into the heart of the building. The first floor has two well-sized bedrooms and a WC.

The interiors are clad in the same redwood pine that the external structure is made from. As they were using Ecology Building Society for their mortgage, they were subject to certain terms such as no PVCu windows and a minimum C energy rating requirement.

Paul had a budget of around £160,000 and LCUK gave him a fixed price of £100,000 for the design and build of the log shell. LCUK then send the designs to a firm in Latvia who prefabricate the homes and ship them over. 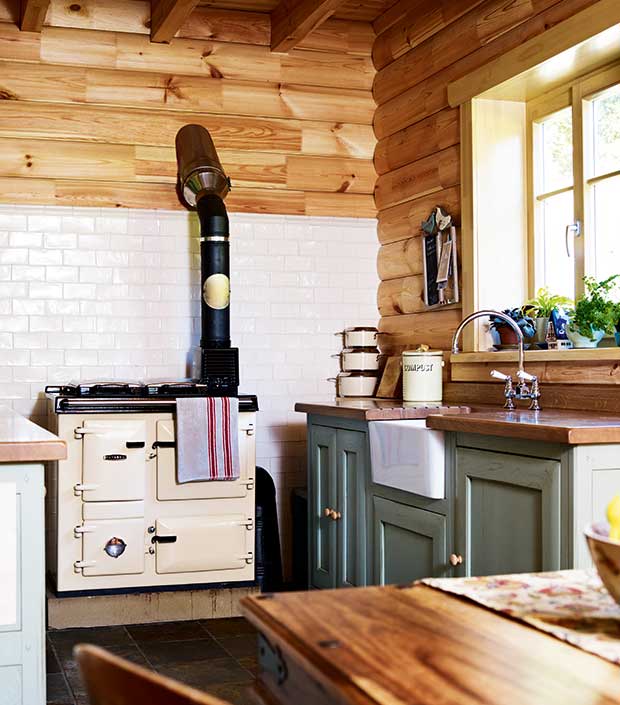 In March 2012, the couple were ready to start the project. Paul dug the foundations and poured the concrete himself which cost less than getting a professional in (but admits he questions whether it was too demanding for someone without the experience).

The whole house arrived from Latvia on two 40ft lorries, including the logs, insulation, doors, flooring and fixings. The pre-cut logs are slotted together on site and fixed together with wooden pegs.

Within 48 hours they were up to window level, and by day four the roof was being craned into place. In the third and fourth weeks, the roofers arrived to shingle the roof, and after a small and costly set back (involving Paul’s underestimation of roof materials), by the end of week 5 the house was weathertight.

During the build they were fortunate to have use of a barn on a farm up the road. They used this to store the logs and other materials, which the farmer delivered by tractor. This was very lucky as the weather was particularly bad — so much so that extra drainage was needed as the water table rose adding a few thousand on in unexpected costs. However, using a kit-type construction meant other costs were set and predicted so they did not go too far over budget.

By the end of week nine, the first and second fix were complete and after only three months of work, Paul and Lucy were able to move in. 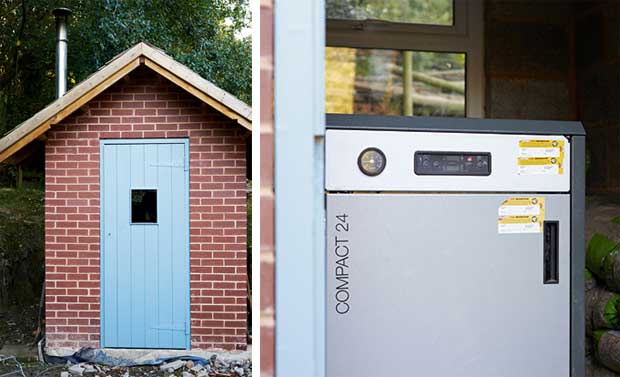 The boiler – supplied by Alpha Heating – is housed in a small brick shed, outside the house

Although the home was prefabricated in Latvia, it was designed to UK Building Regulations and surpasses the insulation requirements. They have a biomass boiler for their heating and hot water but due to the levels of insulation, the boiler only burns two tonnes of woodchips a year at a cost of £250 per tonne.

The couple cook on a woodburning Rayburn. This is free to run as they fuel it with wood from their own land.

The finish of the home was built is amazing, considering it went up in just 59 days. As they did not need to micro-manage, and the costs were fairly easy to predict, Paul and Lucy would certainly recommend this efficient route to building your own home.