When is a door not a door? When it’s a headboard, of course. 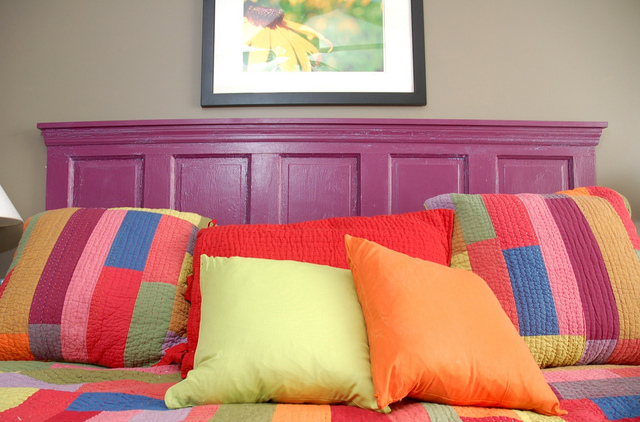 Headboard made out of a door. Image by David_Jacquin on Flickr

I’ve gone a bit potty for upcycling, however thus far it’s all theoretical upcycling and I’ve not actually completed a project yet. That Kirstie Allsopp programme (Fill Your House For Free) with projects such as a headboard made from an old door and an interesting storage installation made from side tables, gave me plenty of inspiration.

I’m at that stage where I’m brimming with enthusiasm about it, can sing its praises to anyone — but if they were to probe, I would have to embarrassingly admit “Well I’ve not actually made anything yet, but it’s so eco-chic isn’t it?”.*

My good intentions to give it a go started about three years ago when I was in the market for a new chest of drawers. Being a member of the dream-rich, cash-poor graduate stock of today (cue the violins), I decided that a second hand chest of drawers given a new lease of life was the way forward. Luckily, my parents had a well-made, three-drawer chest going spare.

I bought some new handles and dragged the thing out onto the drive, sandpaper in hand. Five minutes of sandpapering (pathetic, I know) proved that it was going to take a little more than my puny attempts to get the ancient varnish off. I was somehow gouging scratches in the wood and making a right mess. What I needed was a power sander.

And at that, my upcycling attempt was aborted. Realistically, was I going to spend £50 on a sander to sand a chest of drawers? Ignore the argument of long-term investment because I had no idea if and when I would ever need one again — the imminent loss of £50 was more troublesome than being forever sander-less. Also note that I asked around and nobody had one to lend me.

Secondly, I noticed the dust of (possibly toxic) varnish that was collecting on the floor where I was working. Not only was I breathing this stuff in until I had the sense to don a mask, but it would not be easy to sweep up and ensure it didn’t make its way into the drains/earth.

This raises an important point about upcycling. No, not that I’m too lazy to actually do it. But that with any “eco” or budget project we need to weigh up the costs against the gain. The costs both financially and environmentally.

If you are going to re-use anything, you will want to be sure that it wouldn’t have just been cheaper to go out and buy a new one. Furthermore, if your motives are in part for the sake of being green and depleting waste, you want to know that your methods are not detrimental to the environment too (think electricity used, paint stripper to be disposed of…).

I’m pretty sure the salvage of furniture trumps buying new, as the old could face landfill if never used and a new one, of course, uses natural resources to make it in the forms of wood and power for the tools. However, we ultimately need to be aware of the results of any green intention and look at the bigger picture to truly measure our environmental impact when we undertake a project.

To end my chest of drawers story, I made a stupidly environmentally unfriendly decision that I am berating my younger self for.

I used litres of petrol scouring the local charity shops and antiques centres for another project that only needed a quick coat of paint. Then (it pains me to say) I bought a NEW flat pack pine chest of drawers from a well known DIY store for only £83. I put the pretty handles I had bought on that instead.

I’ve been punished for it though. Needless to say it was horrendous quality. After less than a year a few of the runners broke, so I replaced them (cost £14). Soon after, it became apparent that the drawers don’t like being over stuffed with socks and the fronts will pop off if you do so. A week or so ago, it turned out the replacement runners weren’t much cop either…

*nb. I don’t actually say things like that, and I’m hopefully imagining myself to be a lot more annoying than I actually am. That is the first and last time I will ever use the phrase eco-chic.