Penny and Douglas moved into their house in the West Midlands in 2002, and over the next decade, conducted a series of alterations to improve their living space.

By 2012 they had turned the garage into a home office, utility and WC; reorganised the first floor space to provide an en suite to the master bedroom; then converted the loft to make room for a double bedroom with en suite shower room.

By this point, they decided the house looked a little top heavy, and chose to redesign and extend their small, dark kitchen. The changes to the rear of the house would make way for an open plan kitchen, dining and living space with access to the garden.

A neighbour had recently transformed their home with a new extension featuring large expanses of glazing. This influenced the Dawsons’s own brief to their architect. The priorities were a panoramic view of the garden, the possibility for a bespoke design, durability, thermal efficiency and a fixed timescale.

The new space is formed from the old kitchen and rear reception room, combined with a new extension

As a result of their input, the architect designed a scheme which would convert the old rear reception room, kitchen, and a newly built extension into one large, open plan area. This has been cleverly zoned into distinct areas, split by differing ceiling heights and arrangement of the furniture.

The new kitchen has a dramatic vaulted ceiling containing a bank of rooflights,
flooding the kitchen with natural light

Most of the rear elevation is glazed with Origin bi-fold doors, separated and supported by a narrow brick column. By opening out onto the garden with a level floor finish, it extends the living space outside, creating the perfect party set-up.

The area contrasts well with the fairly traditional style of the entrance hall and the family have retained a separate dining area and study to the front of the house. These provide quieter places to relax away from the hub of the home. 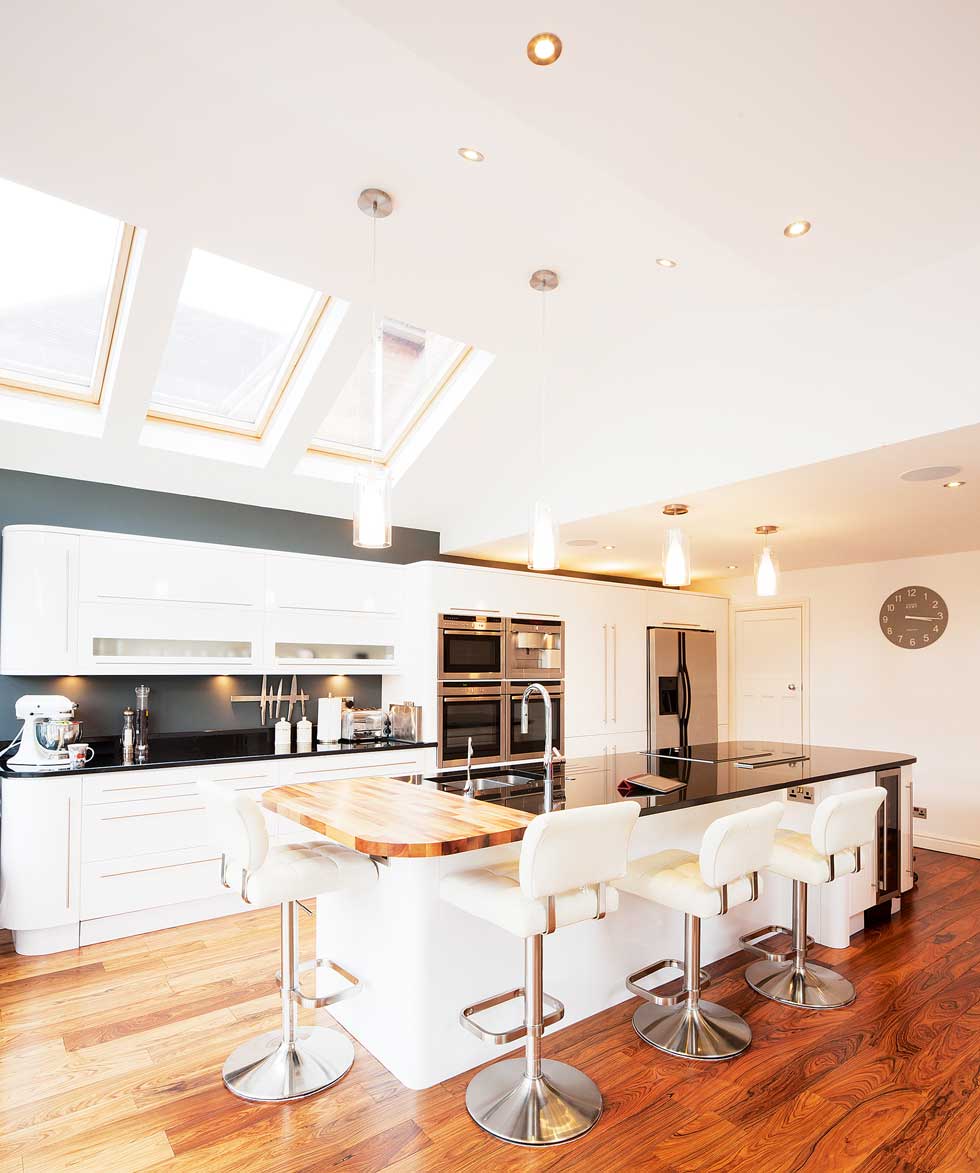 The new kitchen, which forms the centrepoint of the new space, cost £23,000 including Neff appliances. The granite worktops are from Swinsons Masonry

The extension did not require planning permission as the alterations fell within Permitted Development. The rest of the project was fittingly straightforward.

The new foundations for the external wall were located over the existing drains. This meant the Dawsons had to have piled foundations which added £4,000 to their costs. Budget-wise, they feel they could have made savings on the home automation and by having a flat roof instead of a pitched one — however, these are features which add to the feel of the space and make it a pleasure to live in.

Despite the high quality details and finishes, the project was completed in just four months. The expense has all been worth it and they certainly don’t plan on moving

This is a project that has been built for luxury. Underfloor heating has been used throughout the kitchen and living areas which have been finished with engineered Morado wood flooring. Polished granite and walnut worktops add variety to the sleek look. They have also splashed out on a Sonos wireless multi-room audio system, automated lighting and an instant boiling water tap.