After a change in her personal circumstances, Yorkshire-based photographer Shelly Mantovani began looking for a new house for herself, her daughter Schyler, and Spike, their dog.

“I was after a period home and definitely not a new build,” begins Shelly. “The trouble was, period houses can be money pits and I was on a tight budget. I knew that any renovations would have to be done on a shoestring.” Shelly briefly looked online at a four bedroom, 500-year-old property in a South Yorkshire conservation village. 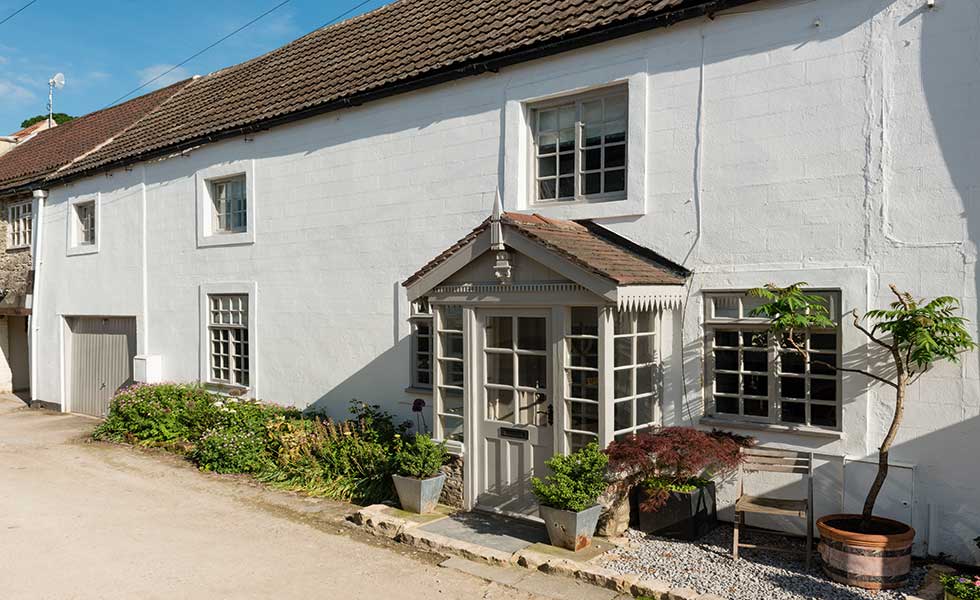 The main house is thought to have been built 500 years ago. Although the front door was replaced, the exterior of the cottage remains largely untouched

“My house hunt wasn’t going anywhere, so a friend of mine said: ‘Show me your shortlist’,” remembers Shelly. “When I did, he picked this property out immediately. He thought it was perfect, but I was put off by the fact that it didn’t have a garden and needed lots of work.

“Still, I made an appointment to view it and, even though mould was climbing up the walls and plaster was hanging off, I could see his point. The place had character and charm.”

One of the house’s most striking features is the mahogany panelling, added by a previous owner

Shelly asked local builder Darren Holmes for an estimate and, after settling on a refurbishment budget of £25,000, decided to take the plunge, buying the house in the summer of 2015. Work started on site in August while Shelly and Schyler stayed with a friend.

A self-levelling screed, topped with engineered oak flooring, replaced the uneven concrete floor in the sitting room and dining room. An old fireplace was also removed and the chimney widened to create a new opening for the log burner, while a stone lintel, uncovered during this part of the renovation, was left exposed. 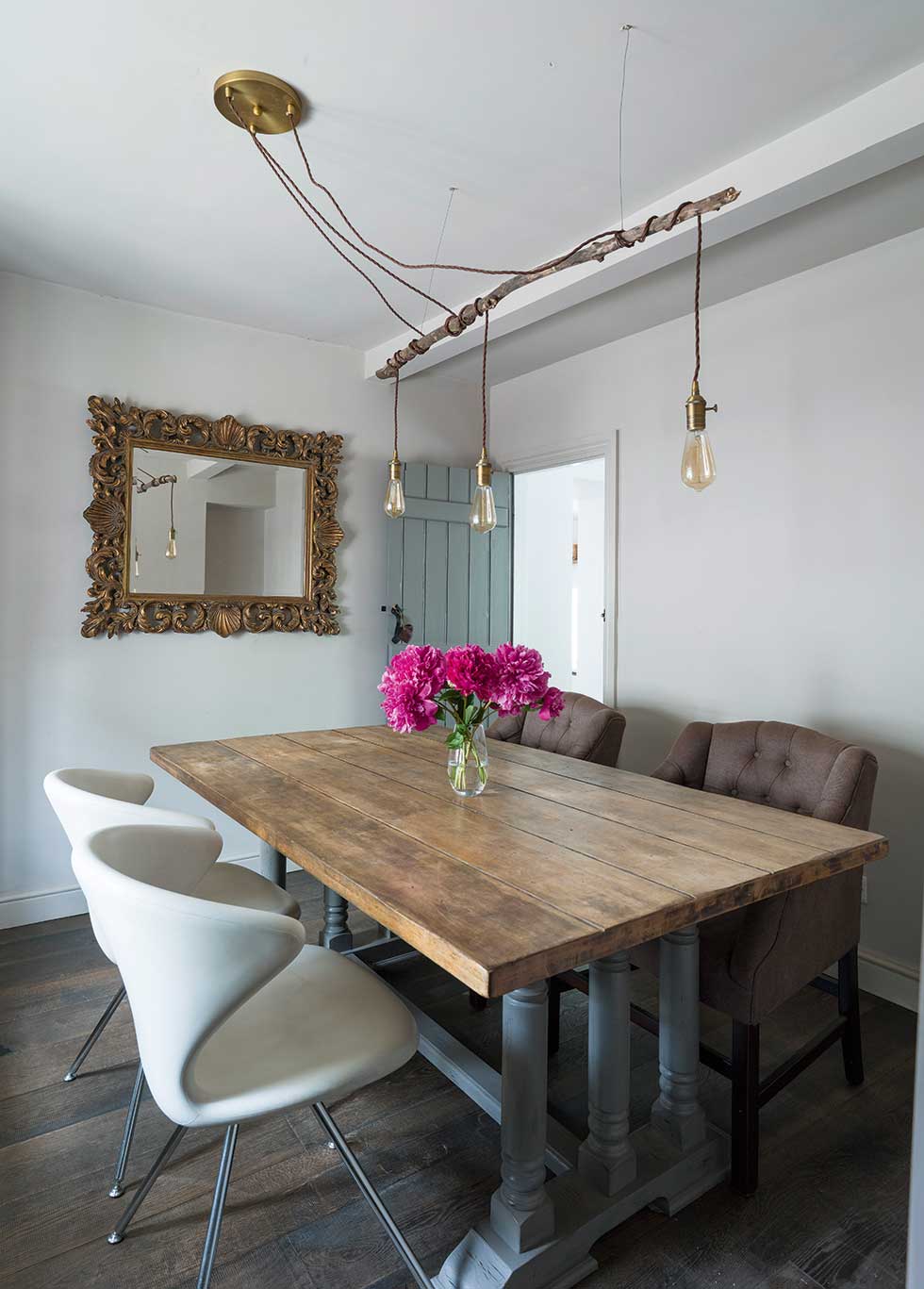 The dining room. Shelly bought the lighting above the table from a charity shop and completed the look with locally-sourced wood

The renovation work threw up some surprises. “It was about this time that we uncovered a ‘hidden’ external door to the rear of the property,” says Shelly. “It was strange: when I bought the house there was a window in the sitting room — but when I saw it from the outside I could see that it wasn’t a window at all. It was a door with a handle and lock, although I wasn’t able to open it.

Internally, the bottom half of the door had been boxed in with a false wall, so Darren ripped it out and made it into a functioning door again.” This now leads to a small outdoor space, which Shelly has landscaped, and which now features a breakfast table. 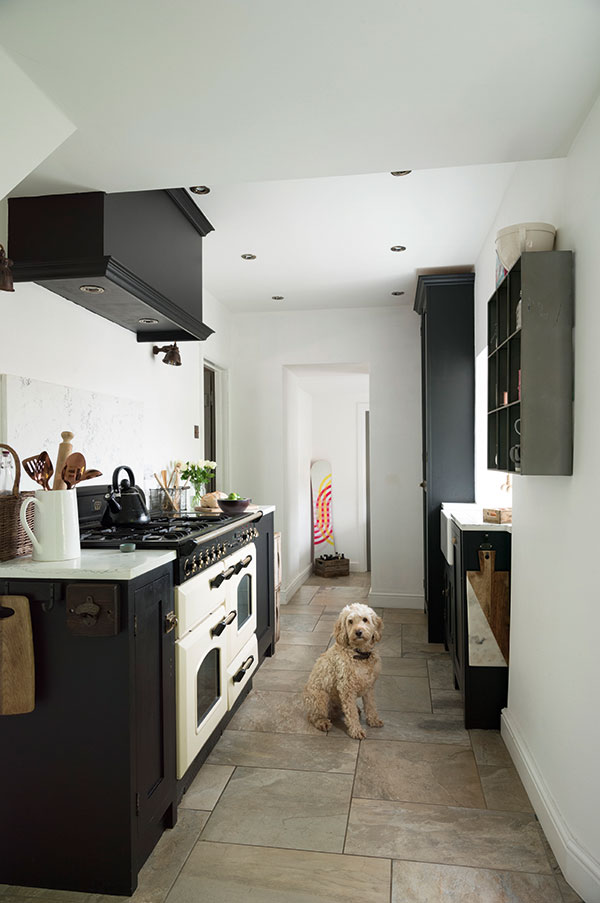 To transform the kitchen into a bigger and more practical space, builder Darren moved the doorway so that units and a cooker could run along the far wall

The kitchen was originally small and an odd shape, due to the position of the door into the dining room. “There was room for a sink and a washing machine and that was about it,” says Shelly. “Darren looked at the layout and said the only way to make it into a feasible working space with proper units was to move the doorway.

Afterwards, I had room for new handmade units, a very small butler sink and a dishwasher. We also added a utility room and a cloakroom off the kitchen using space from the back of my garage, which was behind the original wall.”

Darren incorporated these spaces into the main house by building studwalls and new doorways. In the kitchen, old quarry tiles were ripped up, underfloor heating was installed and new ceramic tiles were laid throughout, leading into the utility room and new cloakroom. Shelly also specified a new energy-efficient boiler and had a new front door fitted. 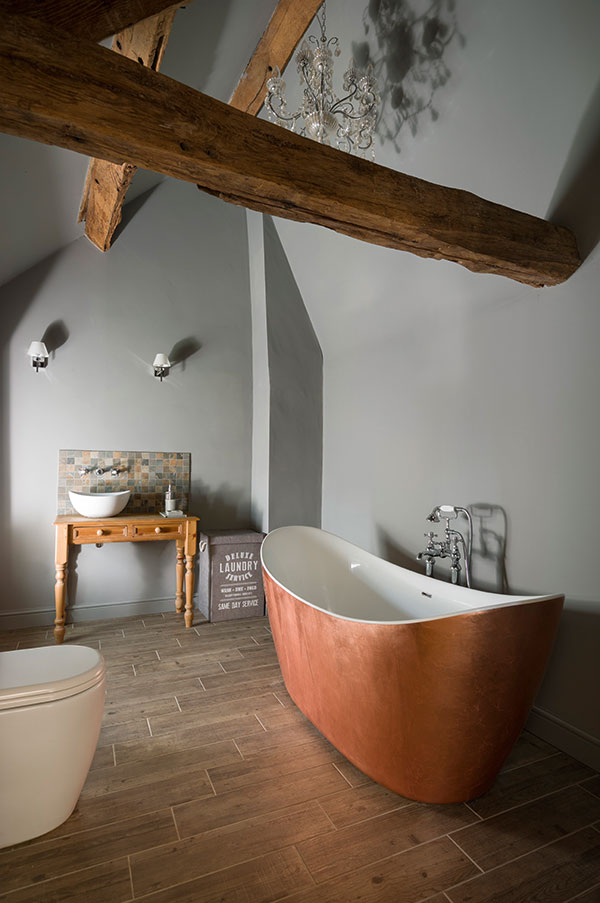 In the master bedroom and second bedroom, the ceilings were so low that Shelly was worried about constantly banging her head, so Darren ripped out both in order to expose the original beams and to create vaulted ceilings.

Finally, in January of 2018, Shelly was able to spend more than her original budget and turn the smallest bedroom into a brand new and generously proportioned house bathroom.

The fourth bedroom has not yet been renovated but Shelly is biding her time to complete the project in the right way. “My £25,000 budget rapidly expanded to double the size, largely because I bought expensive things, like the handmade kitchen and the engineered oak flooring,” she says.

“Then again, I saved money by sanding down and painting everything myself, I’m pleased with how everything’s turned out, especially because I had no experience of renovating on this scale before. It’s been an education.”