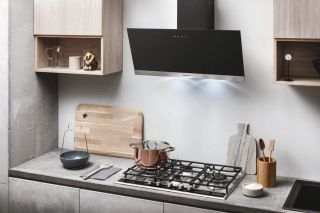 Cooker hoods play an essential role in our kitchens — getting the extraction right in your kitchen is integral to creating a healthy and clean home. Not only does a cooker hood remove odours, it can also take away grease and steam, making your kitchen easier to maintain and more pleasant to spend time in.

What's more, a cooker hood needs to complement your hob and your kitchen layout, too — as well as fit the aesthetic of the room. Some designer cooker hoods can even become a design feature in their own right.

Hoods can either take the air from the room to the outside of the house through ducting – extraction – or clean the air and then return it to the room.  So, your primary choice will be between:

Some designs can work in either way, but this isn’t necessarily always the case, so check before buying your cooker hood.

Both types require a grease filter, but recirculating hoods also need a carbon (also called charcoal) filter, which may not be included in the price.

Generally, extraction to the outside is preferable. However, it is also likely to be more costly because the ducting is usually an additional purchase on top of the cooker hood.

It's also worth remembering that ducting is simpler to fit when you’re building or extending rather than refurbishing, when accommodating it could prove disruptive.

What is a Recirculation Cooker Hood?

A recirculation model will extract grease in the same way as a ducted model – trapping it in a grease filter – but rather than port the air externally to remove cooking smells, it purifies the air with a charcoal filter (which needs to be regularly replaced), trapping odours, before venting the cleaner air back into the room. You may also find that some steam is returned to the room via this method too.

In general, recirculation models offer a reduced extraction rate at a higher noise level than ducted models — it is usually more efficient to port the extracted air directly outside than to filter it inside the unit.

What is a Ducted Cooker Hood?

Ducted cooker hood extract stale from the kitchen to the exterior of the property. As ducted extractors need to be connected to the outside to vent the air, there are some restrictions over where they can be installed.

You should be aware that most cooker hoods are not supplied with ducting — however, this is essential if you are opting for an extraction model. Ducting can usually be sourced from the supplier, but most DIY shops also sell kits.

If investing in a downdraught extractor (one that rises from the worktop), ducting will run under the flooring or along the back of the kitchen units.

Different speed settings allow you to adjust the extraction rate depending on how much steam and odour is being created by what’s cooking. An intensive or boost speed is handy for pungent foods or if something is burned.

How to Calculate the Extraction Rate

“It’s not necessarily a bad thing to have a higher performing hood than you need,” says Sean Liddle, product manager, ventilation, at BSH Home Appliances.

The quietest hoods have a noise level of 50dB or less.

What Types of Cooker Hood are Available?

There’s a range of design options to suit both room layout and styles. Key types include:

Wall and ceiling mounted chimney cooker hoods These include chimney hoods with a canopy over the hob and chimney above that. There are chimney hoods appropriate for both hobs positioned on a run of wall units, and to go over an island unit.

As well as models with the extractor canopy perpendicular to the chimney, check out designs that are angled or even vertical. There are also angled models that don’t have a chimney section on show.

Canopy cooker hoods are also wall mounted, and can be positioned below wall units, or against a wall that doesn’t have cabinetry. They're a discreet option.

Integrated cooker hoods If you don’t want to see the extractor, go for a built-in model that can be integrated into a decorative canopy or unit. Alternatively, opt for a version designed to be fronted with a panel to match the rest of the run of wall cabinetry, which is then pulled open when the hood is needed.

Island cooker hoods are designed to sit above a hob positioned on a kitchen island — where you don't have a wall to mount the cooker hood against. Look out for statement forms such as cylinders or cubes, and those that look like pendant lights or chandeliers, all of which can create a focal point.

Downdraft cooker hoods Located in the worksurface alongside the hob, the slim downdraft unit is raised for operation when you’re cooking. Bear in mind the need for base cabinet space for one of these.

Another discreet option now available is the two-in-one of an induction hob with built-in downdraft extractor. Check how much room the model will take up in the cabinet below — there are space-saving designs.

What Size Should my Cooker Hood be?

Your cooker hood should ideally be either equal to or bigger than the width of the hob. If your hob measures up to 750mm wide, a cooker hood width of 900mm is advised.

A cold hob works best with a hood that is wider than the hob, as the vapours disperse over a wider area. As such, you will need to specify a cooker hood which is wider than your induction hob.

Where Should I Position my Cooker Hood?

Cooker hoods should be positioned above your hob — or, in the case of downdraught extractor fans, directly behind or to the side of the hob.

If you're designing a new kitchen, do give some thought to where you place your hob and cooker hood. This is particularly important if you want to include a ducted cooker hood, as the path and size of your ducting will affect its extraction rate: a shorter route with fewer bends and a wider diameter of the ducting (150mm, for example) will provide optimum extraction.

What Height Should I Install a Cooker Hood Above the Hob?

Your hood should be placed at the recommended distance of between 650mm (for electric) or 750mm (for gas) above your hob.

Although most wall-mounted chimney hoods and island hoods are adjustable, this is not always sufficient — and remember, standard cooker hoods will not work over kitchen islands.

What Cooker Hoods Work Best Over a Kitchen Island?

If your hob is integrated into a kitchen island you will need to specify a special extractor for this.

“Where the extractor hood could once prove tricky when planning an island unit, the variety now available means you can opt to make it a feature in its own right or keep it as a discrete addition that doesn’t detract from the overall look,” says Tori Summers of Benchmarx.

You could also opt for a downdraft extractor, which can be installed into your island, or choose an integrated unit.

Basic hoods are operated via buttons while touch controls look smarter and are easier to keep clean.

Remotely controlled versions allow operation when the hob’s not positioned where you can reach, for example in the ceiling. While smart hoods can be app-operated, or operated via voice control in some instances.

Alternatively, consider a connected hob and hood, where the hob switches on and adjusts the hood, depending on what you’re cooking.

Some designs offer clean air-style functions, where the hood runs intermittently to help keep the room odour-free. Run-on timers where the hood switches off a set time after cooking are also useful.

Most hoods have lighting built in, giving task illumination. LED lights are the most energy-efficient option here. Some also offer dimmable ambient lighting, or mood lighting.

Also handy are filter warning lights, to remind you to maintain the appliance.

How Much Does a Cooker Hood Cost?

Cooker hoods can cost from under £100 for simple canopy built-in designs, up to between £2,000 and £3,000 and over for statement designs and streamlined ceiling models. (These costs do not include installation.)

Downdraft hoods are generally over £1,000.