When Natalie and Mark bought their 18th-century farmhouse in a quiet North Yorkshire village, it came with an adjoining barn. The cold, empty space was ideal for storage and they soon filled it with garden equipment and unused furniture, but there was always that nagging feeling that it could be put to much better use.

“We knew it was wasted space but we had three very young children and didn’t really have the time or inclination to start knocking the barn about,” begins Natalie. “However, the longer we lived here, the more we realised it had huge potential as extra living space. The main house is very linear but, with the barn, it could become L-shaped with a light, open family living area that would link the house to the walled garden.”

A Project Undertaken in Stages 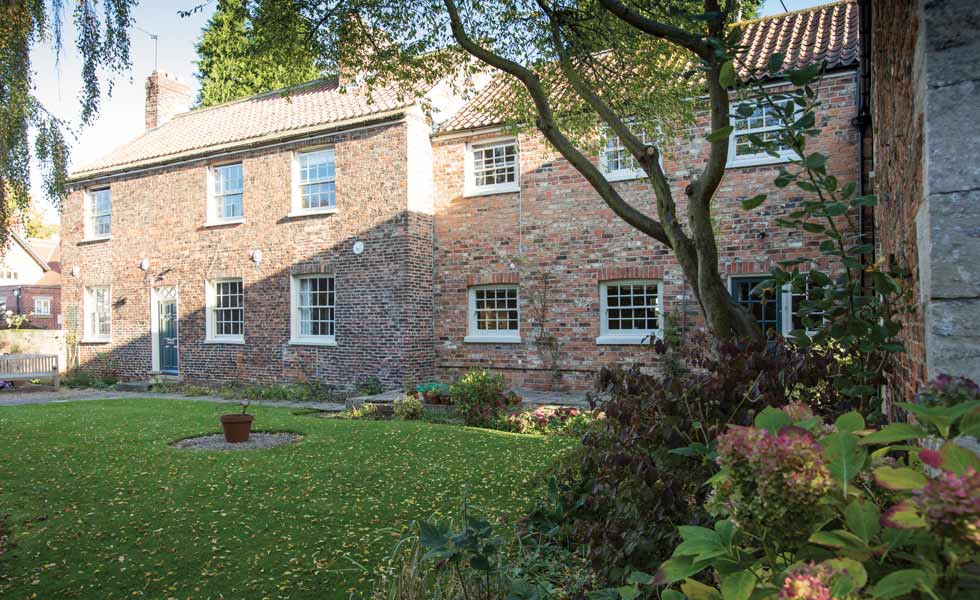 The idea took roots when, four years after moving in, Natalie and Mark decided to transform the kitchen. “The kitchen was large but it had been divided into two parts by a huge brick chimney breast right in the middle of the room, that hid the flue for the Aga,” says Natalie.

“It was quite an eyesore and completely split the kitchen in half, as well as blocking quite a lot of natural light.’ Natalie and Mark employed a local builder to remove the entire chimney, which extended through their daughter’s bedroom and into the loft.

As soon as it was dismantled, the kitchen and bedroom ‘opened up’ and they were able to create a new, open-plan family kitchen, complete with farmhouse table and shaker cupboards, chosen by Natalie, who runs an interior design company. “We realised how radically it changed the way we lived and it gave us the incentive to do more,” she explains. 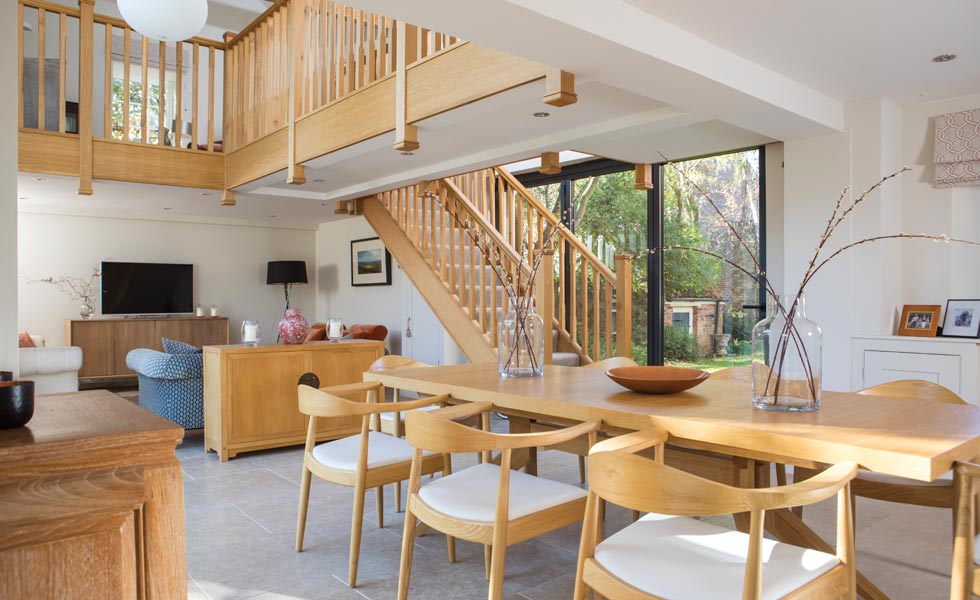 Natalie and Mark included a mezzanine to create an area that could be used as a snug or study, linked to the main house on the upper level by a walkway. The staircase was crafted by a local joiner

However, it was another two years before they got back in touch with the builder who had undertaken the kitchen transformation to ask whether he would take on the barn. “We got quotes from several companies but we knew Stuart Hayes would do a good job and we liked the way he worked. There are not many builders who would take into account the disruption this kind of work causes to family life, or who would sweep up after themselves at the end of each day. He wasn’t the cheapest, but we knew he would do a fantastic job.”

They also contacted the local council to check whether they would need planning permission to convert the barn into a high, open-plan living space, complete with a mezzanine and walkway linking it to the upper floor of the main house. 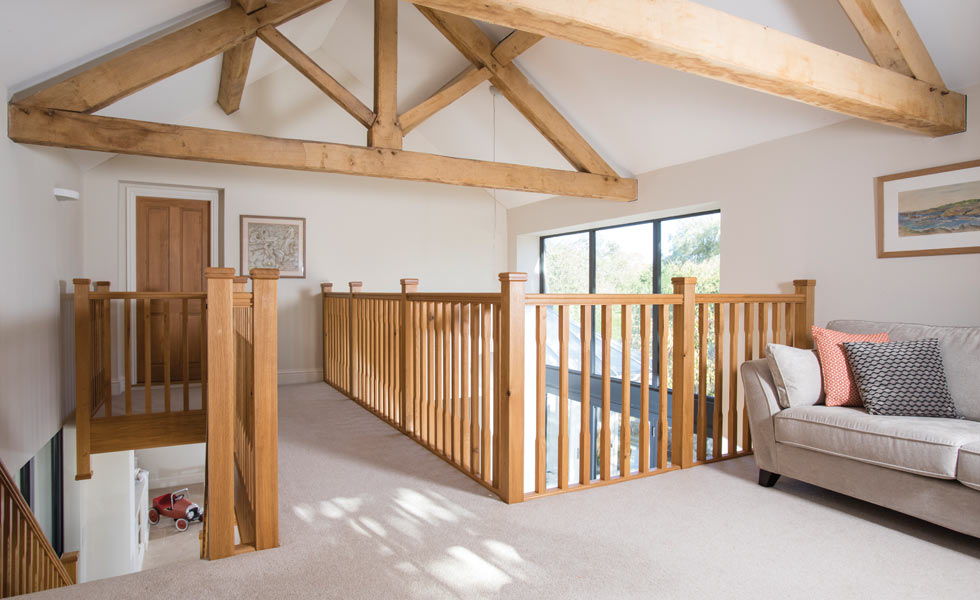 The mezzanine. The new exposed green oak trusses replace original roof timbers that were damaged in a fire many years ago

Fortunately, the work fell under Permitted Development, but to be certain that a proposed development was lawful and did not require an application for planning permission, the couple applied for a Lawful Development Certificate from their local authority. “We chatted with the planning department and they gave us the all clear,” explains Natalie. “The council confirmed that we could enlarge some of the openings but we preferred the look of the agricultural building.” 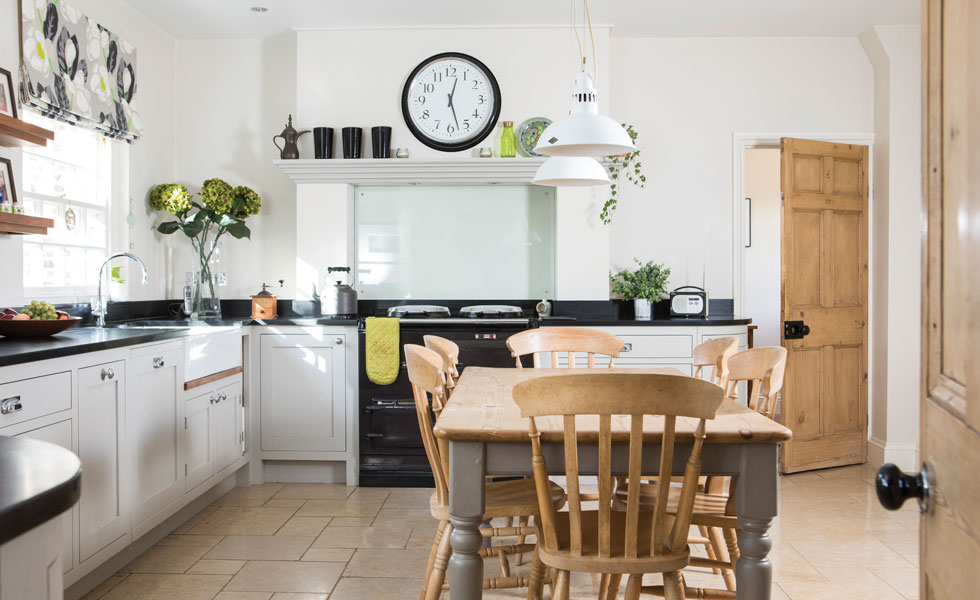 To begin with, Natalie and Mark drew up a rough sketch and wishlist, which included a sitting room at one end of the barn and a spacious dining area at the other. The original barn opening at the back would be glazed, with doors leading straight into the garden. Natalie originally wanted to block up the opposite opening at the front and fit the original barn doors over the top to create the illusion that it was still a working barn but, ultimately, they went with the more contemporary approach.

The first job on site was to knock down the barn wall separating it from the main house. The builders took the old beams and roof trusses to the bottom of the garden, where they were later cut up and used for firewood, while the rubble was disposed of in skips. They then supported the new opening, before creating a false wall out of boards to keep dirt and noise to the main house to a minimum. 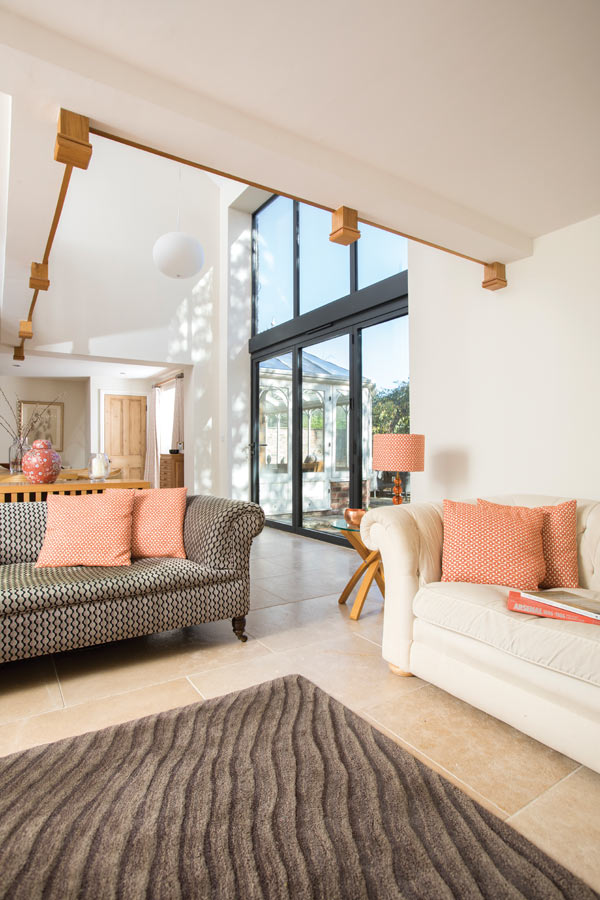 The entire roof was then removed and rebuilt, with new timber trusses, insulation and tiles. “There had been a fire in the barn around 40 years ago and the timbers were badly charred,” Natalie says. “When the roof started to leak quite badly, we looked at the option of repairing it and sandblasting the beams but it would have been very costly, so we decided to replace the whole roof.”

One of the biggest challenges of the project was access. There is no vehicular access to the property so everything – including the huge trusses – had to be carried onto the site through the garden gate and then winched manually into position. “We couldn’t get a crane in so everything was done the old fashioned way!” 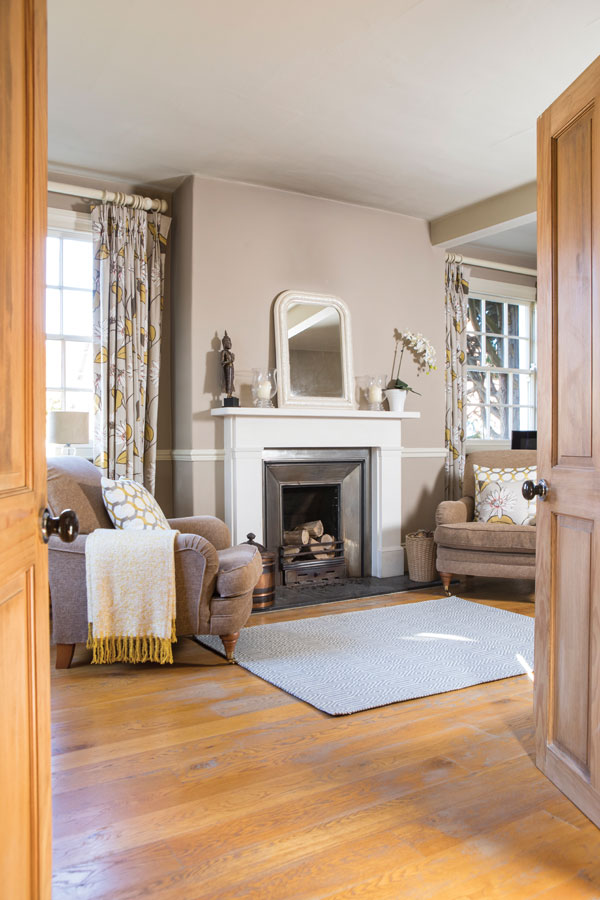 The sitting room was fitted with a new stone fireplace surround when Natalie and Mark bought the house, but this room is now used more as a music/reading room since the barn was converted

With the roof reinstated, the sturdiest exterior walls were then repointed and half of one wall was taken down and rebuilt. “The walls are quite wonky so rather than rebuild the whole lot, the builders effectively created a ‘room within a room’, filling the cavity between old and new with masses of insulation,” says Natalie.

The floor of the barn was originally a foot lower than the farmhouse, so the builders raised it to the same level with layers of screed, a wet underfloor heating system, insulation and limestone tiles. The barn also used to have a storage platform with steps rising to it from the centre of the building. Two new steels were inserted to create the mezzanine and a local joiner built the oak staircase. When the false wall between the barn and farmhouse finally came down, Natalie and Mark couldn’t believe the transformation.

“It has totally changed the emphasis of the whole house,” concludes Natalie. “Now we spend most of our family time in here. It’s light and open in the summer yet cosy and warm in the winter. In hindsight it would have been cheaper to knock it down and start again, but then we would have lost its lovely character. As it is, we only wish we had done it sooner.”

One of the biggest challenges of the conversion project was getting modern windows to fit with the irregular openings of the barn. Although the builders offered to measure the openings, the supplier of the glazed units chose to do it themselves, but this resulted in an entire section needing to be replaced. “It took them two attempts to get the glass correct and even then the seals leaked,” explains Natalie. 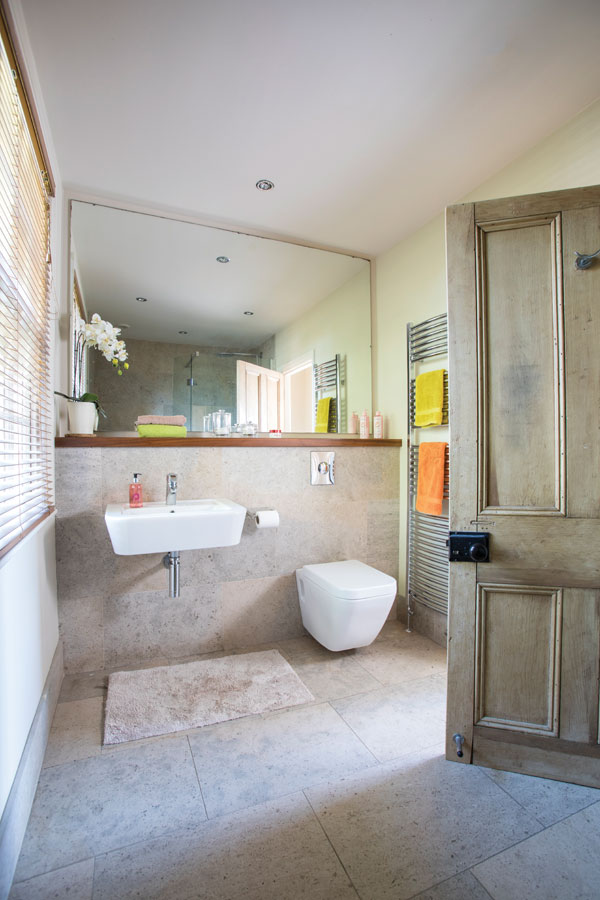 The original barn openings were replaced with glazing, meaning the entire space is flooded with light, despite some apprehension from Natalie, who initially preferred a more sympathetic approach, reusing the original doors to create the illusion of a functioning barn. 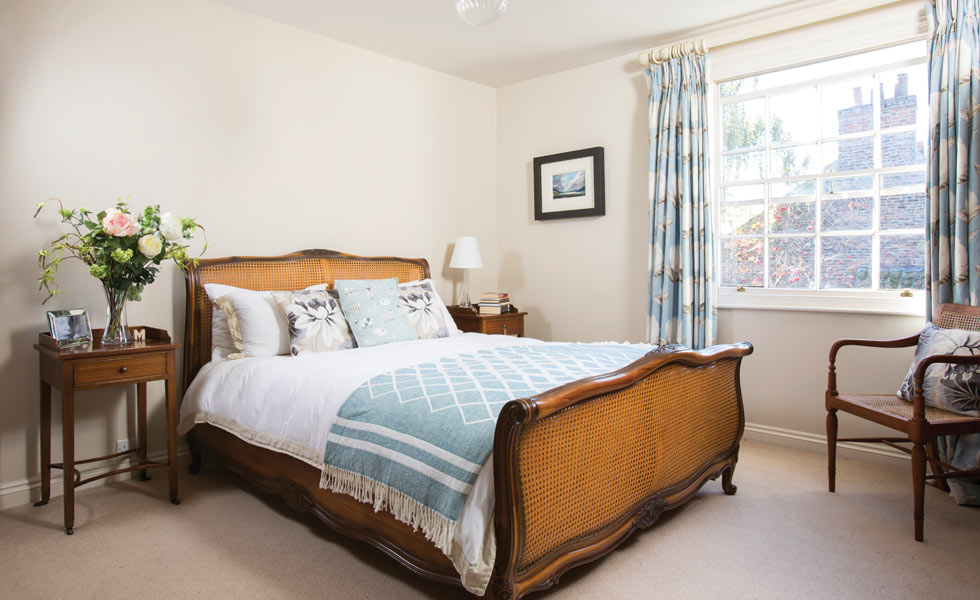 “This was the one area where Mark and I didn’t agree,” says Natalie. “Mark was absolutely adamant that we should have the second opening glazed as well and I have to admit he was right. It cost an extra £5,000 to do but the light it draws through the room is incredible and it feels so much more open than it would have done with one wall bricked up.

The barn doors are now propped up outside until we decide what to do with them!”

The result complements Natalie’s modern interior design and the couple are planning to replace a dated conservatory at the back of the house with a modern glass box extension in due course. 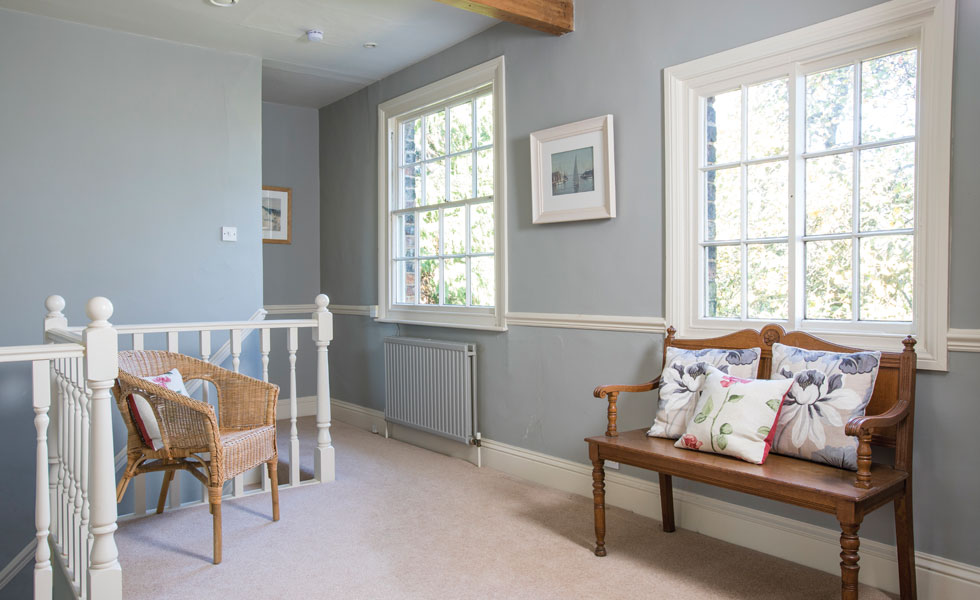 The original character of the 18th-century farmhouse inspired the principles of the barn conversion — which were to keep its integrity, character and open spaces