A SIPs Self Build | Homebuilding & Renovating Skip to content Beccy and Steve Kestin’s unique energy-efficient home was built using Structural Insulated Panels (SIPs) – chosen for their fast construction time and airtightness – ensuring the property is superbly insulated, despite its extensive use of glazing.

When Beccy and Steve decided to start a new life in Cornwall they took on two immense challenges. The first was to start up a mussel farm – Cornish Mussels – which they now run together, and the second was to build a brand new, eco-friendly home on the site of a bland 1950s bungalow.

“We’d been living in Bristol, where Steve was working at the university and I was a primary school teacher,” Beccy explains. “We wanted to move down to Cornwall, and when we decided to start up a mussel farm we needed to wait some time before we could begin harvesting and selling the mussels. Only then did we turn our attention to where we were going to live.”

Keen to find a country home with enough land for machinery, the couple purchased a dilapidated bungalow on an elevated five-acre site, one mile outside a village near Falmouth. “The bungalow had already been extended, so was quite spacious, but there was no insulation and everything needed doing,” says Steve. “But we wanted to take on a renovation project.”

Once Beccy and Steve had moved into the property, the full extent of the renovation work became apparent, and they accepted that they would ultimately be left with just four poorly insulated external walls. Over the next few months they also realised the potential of their magnificent south-facing plot and were determined to build a new home to replace the existing bungalow.

Retired architect Geoff Carter was recommended to the couple and they explained to him their dream of creating a light, modern house incorporating plenty of glass. “We were all on the same wavelength from the start,” says Beccy, “and we asked Geoff to design something which would make the most of the views.”

When their plans for a four bedroom, two storey house were duly approved, they began the preparations. “Our brief had been fairly specific and included a large conservatory for growing exotic plants,” says Steve. “Until we were given the green light by the planners we hadn’t really considered how the house would be built, however, and we were unsure which route to take.”

Originally the Kestins considered constructing their new home in rendered solid lightweight blockwork, but the builder, who had years of experience building in Cornwall, commented that this method might not be the best option for their exposed coastal site and so they began exploring alternative options. “That’s when we found out about SIPs and realised that they could make life easier in so many ways,” Beccy recalls.

Structural insulated panels (SIPs) are a preengineered building system – long established in Scandinavian countries – which were first introduced to the UK in the 1970s. SIPs form a strong, lightweight structure which is fast to erect, thanks to the large components, and offers fantastic thermal performance.

“When we discovered how fast the shell could be built and how well insulated the house would be we approached Build It Green, a company which specialises in the supply and construction of structural insulated panels,” continues Steve. “Our builder also recommended a belt and braces approach by building an outer leaf of rendered blockwork in order to create a cavity construction – saying that, even Cornish rain couldn’t jump a cavity!”

The architect’s drawings were transformed into three-dimensional computer models by Build It Green, which gave the Kestins a detailed understanding of how their house would be built. “You could see the positions of all the panels and glulam beams,” says Beccy. “The finished house is identical to the model.”

Steve and Beccy vacated the old bungalow and moved into two mobile homes parked in their field while the work began. A local builder demolished the 1950s bungalow and prepared new, steel-reinforced foundations and a concrete slab for the load-bearing wall and roof panels, which were erected in just one month using glulam timber roof beam supports.

The main contractor, Peters & Jane, then completed the build and proved invaluable, ensuring that the project came in both on time and within budget. Steve acted as joint project manager – mainly keeping an eye on the quality of finishes – but tackled some of the physical work too, including landscaping the garden with granite boulders and completing the sections of flat roofing.

“The local tradesmen were fantastic, and we’ve become firm friends with both our architect and builder. In fact, the only major delay was caused by having to wait for some of the specialist glazing to arrive,” recalls Steve. “Without the glass link the house wasn’t weatherproof, and we couldn’t continue fitting out the interiors, causing a three-month delay.”

The house has been roofed in zinc, and incorporates an extraordinary amount of glazing – including an imposing two storey conservatory which may be closed off when required. This glazed space captures heat from the sun, which is then redistributed around the house by the heat recovery system, and creates the perfect environment for Steve’s exotic plants.

“We wanted an open plan living/kitchen on the ground floor, and this then opens directly into the conservatory through sliding doors,” says Beccy. “The double-height entrance hall also opens into the main living area, and is one of the features people comment on because it is 2.5 metres wide with a glazed roof, and gives a real feeling of space.” This hallway is overlooked by a galleried landing on the first floor, where glass doors may be pulled across to open or close off the upper conservatory, depending on the time of year, and further folding sliding doors lead out from the couple’s bedroom onto an enclosed roof patio.

A heat recovery and ventilation system ensures that the house maintains a comfortable temperature, reclaiming heat from stale air which is used to warm fresh air brought in from outside. Oil-fired underfloor heating (which may be powered by a heat pump in the future) has been laid beneath the limestone and ash floors, but is only really needed on particularly cold days – ensuring that the new house is extremely economical to run.

“We never set out to build a green house,” admits Steve, “but the more we discovered about SIPs, the more we realised that they would be the perfect choice for us. The build wasn’t without its problems, but the SIPs construction was definitely the quickest and easiest part of the whole project.”

After living in the ’50s bungalow and then in mobile homes, the Kestins were particularly grateful to move into such a comfortable new house. “You would think that so much glass means that it’s boiling in summer and freezing cold in winter,” says Beccy, “but in fact the rooms remain at an even temperature all year round. It means that you can walk around indoors wearing a T-shirt any month of the year, which is one of the benefits of such a highly insulated home.”

What exactly are SIPs? 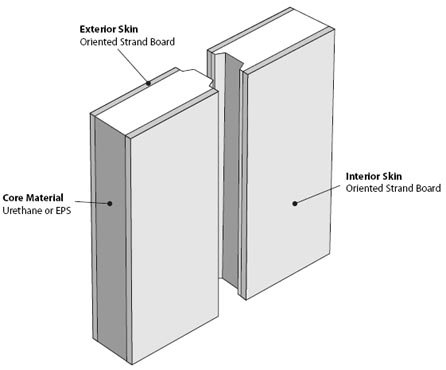 Structural insulated panels (or SIPs) are made like a sandwich, with a filling of insulating foam (either expanded or extruded polystyrene) inserted between two sheets of structural board, such as plywood or oriented strand board (OSB). The layers are bonded together ensuring the panels are extremely robust. SIPs replace several components of conventional building such as studs and joists, insulation, and vapor and air barriers. As such they can be used for many different applications including the exterior wall, roof and floor. SIPs have been around for over 50 years internationally, but have only become commonplace in the UK over the last eight years or so. They create a house so airtight that most people need to specify whole-house mechanical ventilation; Beccy and Steve opted for a system from Villavent.