The Art House is a wonderful, low-profile Georgian property in Tetbury’s finest square, right in the heart of the charming market town. Built in around 1730 of mellow Cotswold stone, the house had enjoyed former lives as a restaurant and antiques shop. Recently, however, it has undergone a total makeover and now every room in Gary Kennedy and Nicola MacWilliam’s Grade II listed home has been given its own distinctive personality. The interiors are a visual feast, featuring a stunning art collection alongside items picked up on the family’s world travels.

“We’d been moving between houses in France and the Australian rainforest ever since our son, Max, was born,” explains Gary, an interior designer and art collector. “When he reached the age of 12, we decided it was time to stop travelling — and then we saw this house advertised on the internet.” Gary and Nicola returned to the UK specifically to view the property, and decided that this would be the perfect place for them to finally put down roots. 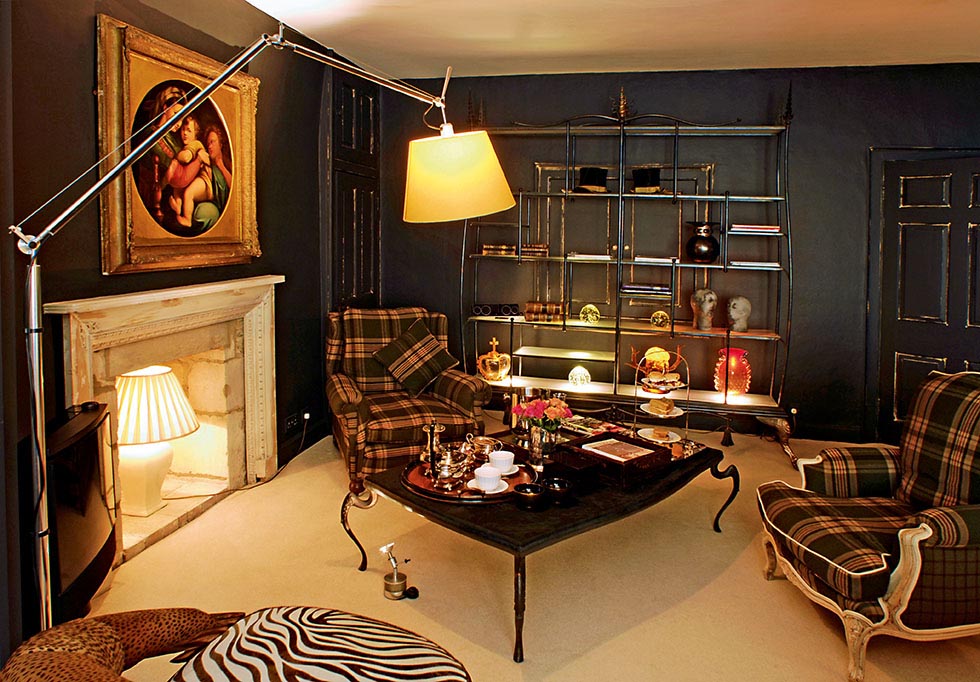 The house was generally tired and dated, but the rooms were all beautifully proportioned. Original features included wood panelling in the sitting room and encaustic floor tiles in the impressive hallway. “An important reason for choosing this house was the private walled garden,” says Nicola. “Previously, we’d lived in homes with up to 150 acres of land, which took far too long to maintain. We were relieved to find a townhouse on such a manageable-sized plot.” The family moved into their new home in 2005 and set about planning the order of work.

Apart from employing plumbers to refit the bathrooms and an electrician to rewire the house, Gary and Nicola tackled the majority of the work themselves. First to be completed was the kitchen/breakfast room, which boasts an original flagstone floor. Mindful of their budget, they adapted and painted the existing cabinets, reconfiguring the layout, changing the handles and adding beading for a fresh look. Walls have been panelled with painted boards and are now adorned with artwork instead of cupboards.

“The worst job was installing an oven and hob in the island unit,” says Gary. “We had to take down part of the ceiling and angle-grind a trench through the flagstones so the electrician could wire it up. Hiding a simple cable created a huge amount of dust — you couldn’t see from one side of the room to the other.” Next, the couple turned their attention to the four bathrooms — which have been fitted with designer sanitaryware and re-tiled with Bisazza mosaics and porcelain tiles. Some of the bathrooms even have moisture-resistant TVs built into the walls. Downstairs in the hallway, the colourful encaustic floor tiles were laboriously cleaned and restored. A cupboard was also removed to open up the space, revealing the remnants of an original staircase which would once have led up to the maid’s bedroom. 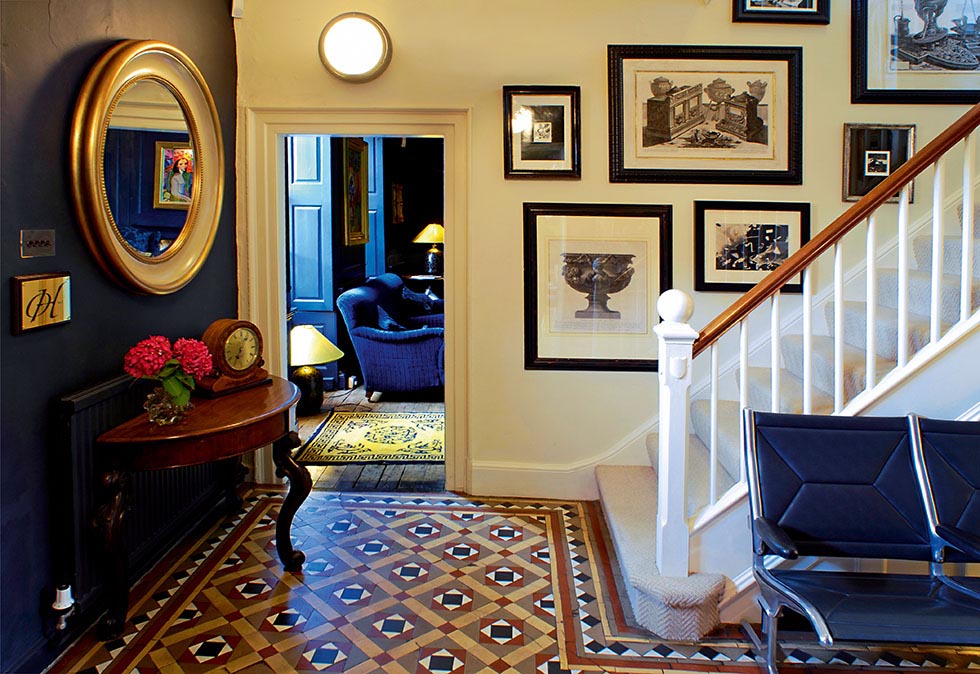 “The main problems we encountered were the usual ones with very old houses: sloping floors and ceilings, uneven walls and doorways, but all this adds to the charm,” Nicola explains. “I tend to leave the interior design decisions to Gary, who has been known to redecorate a room several times in quick succession until he’s completely happy with the colour scheme.” Inspiration for the panelled sitting room came from a collection of antique Tibetan rugs, which had the same deep blue background as the front door of the house.

Rich Mulberry fabric was chosen in a similar shade to upholster the deep sofas; the panelling was painted blue and items of furniture chosen to coordinate with the scheme. Antique wingback armchairs sit alongside limited edition bronze chairs by Mark Brazier-Jones – which are also collected by the likes of Madonna, Brad Pitt and Mick Jagger – and Gary has created an irreverent mix of traditional and contemporary styling, combining antiques and bespoke modern furniture.

The original drawing room has been converted into a stylish dining room, which is currently decorated in hues of olive green and rich red. “It was previously a cream colour,” says Nicola, “but Gary decided to paint the whole room green, including the fireplace. One red feature wall was designed to show off the sofa and paintings, and we had the dining table made to order using rare bird’s eye maple. 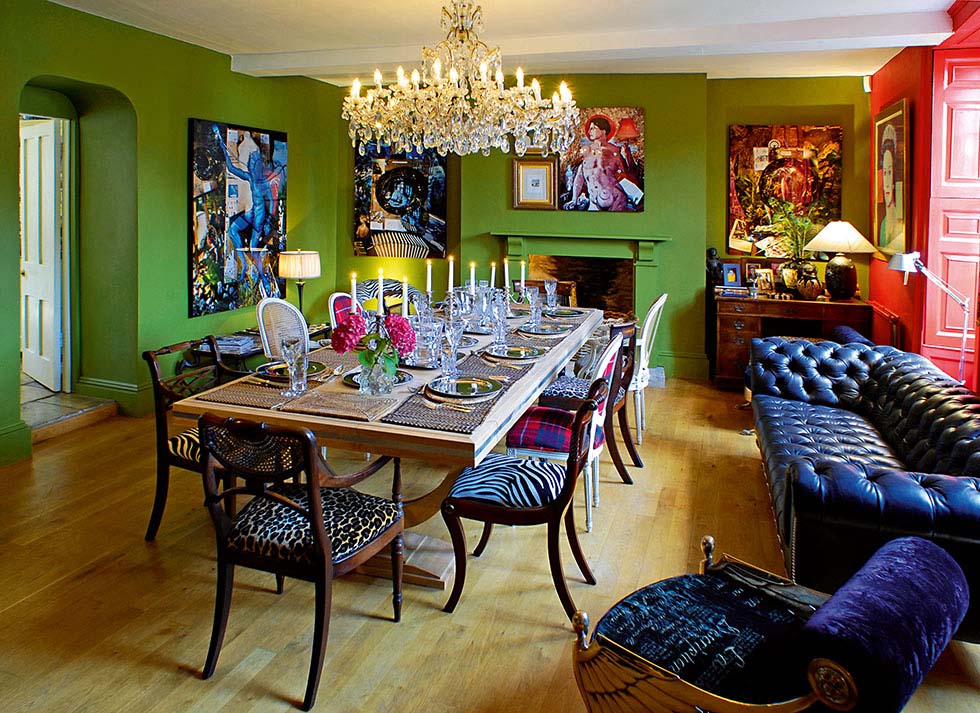 Once the main house had been completed, Nicola and Gary converted the dingy basement, which had sagging ceilings and was used for storage. They gained permission from the listed buildings officer at their local council and dry-lined the walls — creating a fifth bedroom and an additional bathroom served by a macerator, connected to a soil pipe in the ceiling.

Outside, the walled garden has been divided into separate areas for lounging and dining. A raised deck area – shielded and enhanced by shaped topiary bushes – provides a cosy place to relax. Traditional paving slabs have also been laid to create a dining area screened by newly planted silver birch trees.

Gary has thoroughly enjoyed bringing personality to the family home, and has a strong dislike of design ‘rules’ — preferring instead to develop his own style. “Living in a listed building does bring restrictions, but it doesn’t have to curb your individual style,” he says.